Realizing his invisibility will not keep him safe if he keeps tripping over things, Duvrael decides to go on the offensive. Moving past Kahru and the two scared orcs, the wizard grins as he sees the giant fall down.

What a great line of sight to the next chamber!

Intoning eldritch phrases and moving his hands around, Duvrael suddenly appears between the orcs and the prone chef. Before anyone can react, he slams his staff down and a tiny mote of fire arches lazily over the dire wolves and over the Colonel, into the chamber beyond.

Where, with a loud crash, a fiery inferno erupts amid the large orcs.

‘Kill the giant!” Kahru barked at the wolves as he saw the giants cleaver struck down at the squire, left exposed by the Colonel.

The rash attacks of the Leaper and others had only succeeded in attracting more trouble and they could only hope that no more giants came rushing in attracted by the commotion. Fortunately though the Leaper redeemed himself, acting with speed of thought to knock the giant on its ass and give the boy a chance.

Now it was Kahrus’ turn and seeing the giant land at his feet, the druid zealot channeled the power of the Storm Bear, his body enlarging and transforming

and with a roar Kahru the bear came slamming down on top of the prone giant, a flurry of claws and teeth

Doc can feel the righteous justice burning within him. He knows that while he was reborn with this human shell, the longer he channeled that vengeful anger, the less hold he had on his appearance as his true visage would shine through. No reason, no conscience, just a hunger for justice. Doc's appearance, yet another gift from the Nameless Sheriff, appeared rippling and translucent, almost revealing the hints of a skeleton beneath shrouded in flames and writhing wisps of others' souls.

Doc focused this anger on the Hill Giant Chief sitting prone and closed in, firing the Peacemaker. As the bullets launched forth, Doc focused all of his intense hatred on the sitting target and loosed another wrathful soul to find its victim.

Supporter
The Colonel is frustrated that he didn't reach the door in time to pull it shut. And now some giant is throwing rock at at him. Isn't it always the way. He can't get out of the way past the wolves, so he stays by the door.

Lighting flies from his fingers as he reaches out at the orc in front of him. As it connects, the there is a horrid scream as the lighting blows the poor orc away.

He summons a spectral trident that stabs at the other orc by the door.

"Donnell! Watch out," the Colonel shouts.

Doc marched up to the giant, who was sitting on the floor holding his cleaver in one hand and his head with the other. Point-blank, the gunslinger fired his weapon, and the strange magical bullets careened off the giant's thick skull, leaving bloody gashes on its head.

Kahru turned into a big white bear and leaped on the giant from behind, who struggled to gain his feet, still reeling from Gimlak's psychic attack and the magic bullet to its skull. Kahru clung to its back with his claws and chomped into the giant's neck-fat.

The summoned wolves were toying with their respective orcs, who were kicking and punching at them when Kahru sicced them on the giant chef. They leaped into action, quite literally, as they left their toys behind and jumped over the central table and barrels. They harried the giant's legs as it stumbled around, trying to get the bear off its back.

Near the northern doors, the spirit that had entered one of the orcs from Doc's gun did its work, and that orc fell dead, staring up at the sky, eyes sunken and wide in terror.

While all of that was occurring, Duvrael had slipped invisibly by until he could see into the north room - the servant's mess hall. He spied some big orcs (so big, they must have been the half-ogres known as orogs) who were grabbing pikes off of a wall-rack. He appeared and sent a lick of flame that exploded in the room, setting much of the area on fire - furs that hung from the walls, straw cushions on the chairs, all burned. An orc that was hiding under the table caught a daft of flames that billowed under, right in the face, and he died as his lungs burned.

The orogs had done their best to duck-and-cover, and while they were badly singed, they rushed forward in spite of it. Duvrael was shocked to see how aggressive they were - they ran straight at him, thrusting their pikes in a smouldering fury. They ran past the Colonel in the doorway, ignoring him entirely, but luckily for Duvrael, the third one was blocked by Kaligan, and it thrust its pike at him instead.

The wizard swung his staff, creating a magic shield, but the pike-blows still drove him on his heels. Kaligan parried both thrusts, while the Colonel summoned a floating trident that thrust down at one of them.

The Chef's wife threw another rock at the Colonel, and then two very dumb-looking hill giants came at him from the northern room. They fought for a moment over a single chair before finally grabbing their own, and they stood shoulder-to-shoulder in the doorway, taking turns swinging enormous chairs through the door, trying to crush the Colonel under them. 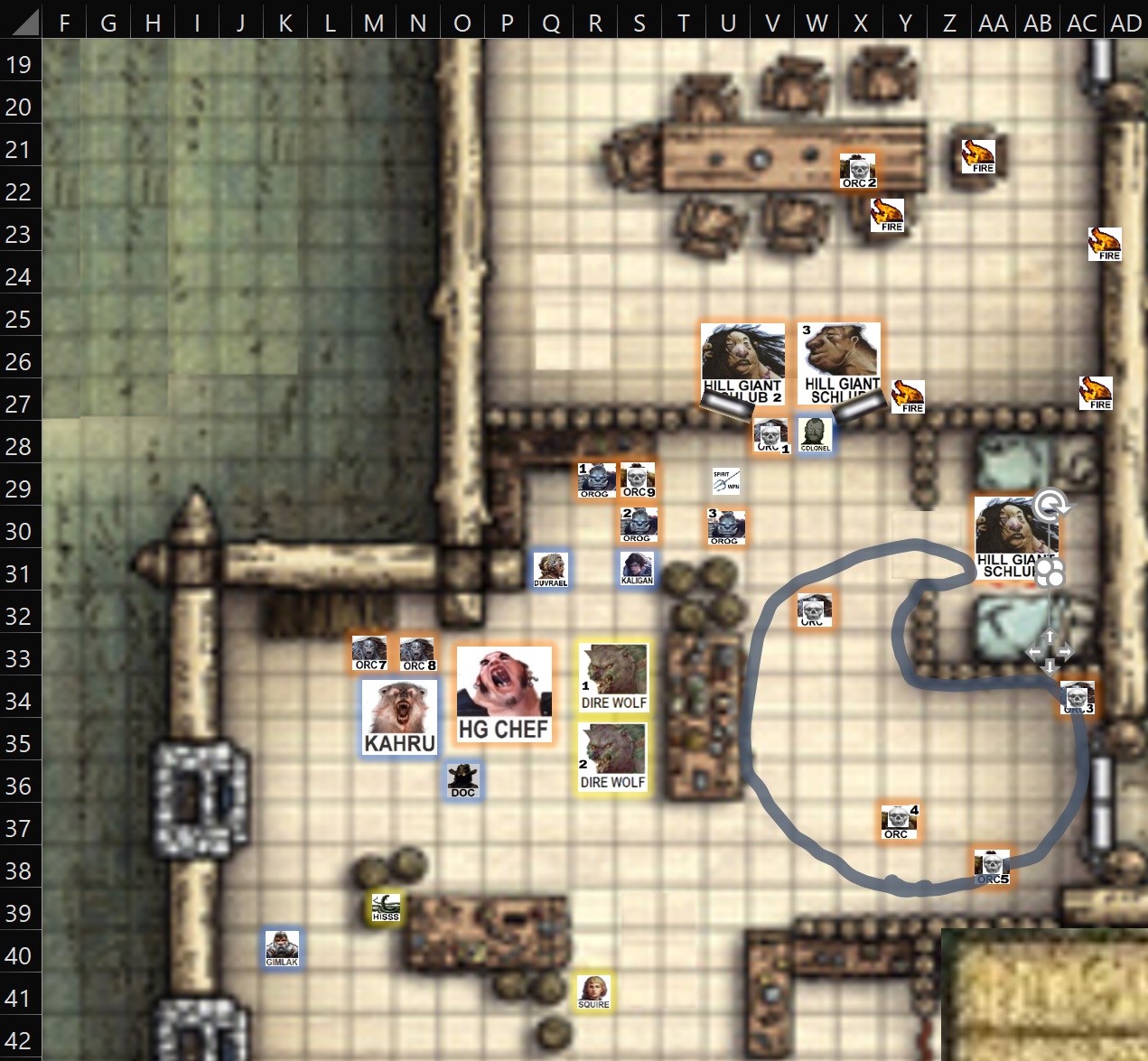 Chaos, flesh and blood! the giant stood up as Kahru the bear chomped down on its neck fat. Kahru tried to get another pound of flesh, but failed…

Supporter
As the Orog passed by the Colonel reached to grab it. Lightning coursed from his fingertips, driving the creature back.

the colonel slammed the door and held it [EDIT: caused a wave of thunder to ripple out form him, knocking some of his enemies off his feet. Mean]while elsewhere in the room the trident struck fast.

Doc cannot believe this black hat has survived the onslaught of bullets and the wellspring of hatred unleashed upon him. The delay in my vengeance just ensures a heavier blow.

Doc's fires at the Hill Giant Chef, reflecting that his justice may not be merciful, but it will at last be certain.

The Hill Giant Chef struggled with Kahru in bear-form, and managed to get the upper-hand, throwing the bear off. He raised his cleaver, lunging in to gut the bear, but Doc put two ghostly bullets into his exposed under-arm. The giant spun around, wheezed, and fell over dead on the kitchen floor.

::Aaiiee!!:: shrieked the giantess from the little room, ::Yoo smalls kilded him!::

She flung a rock at Doc, that nearly bowled him over.

Kahru the bear bellowed as the giant chef threw him off, before it then spun and fell down dead. The bear looked at Doc and let out a chuff which Doc might take as thanks, then rocked its weight back to the two surrendered orcs as he scanned the chaos of battle.

The floor around the north door was getting crowded, more giants and a swarm of half-ogres! Could the large white bear get through or would he need to go over the table? The bear growled at the wolves willing them to turn on the orogs…

Tonguez said:
just maintaining concentration as I wait for the next turn, can a bear give commands to dire wolves?
Click to expand...

Duvrael grimaces as he is injured by the orogs' pikes, although luckily his magical shield and mage armor help prevent some of the damage.

Tauntingly he smiles at both enemies, then hurls another mote of fire at the half-ogre to his left. Unlike the first spell, this mote does not explode into a ball, but rather it burns into the creature's armor like a blazing ember straight out of the Nine Hells.

Kaligan seeing his companion Duvrael being harried by the Orogs with pikes, moves in a bit to the left so that he is standing in-between Duvrael and the two Orogs causing him the most difficulty. With great speed and accuracy, Kaligan cuts down the Orog that was just hit by the mote of fire and slices the other Orog deeply.