Duvrael disappeared and his snake slithered under a table. The Colonel and Donnell began to move past the two orcs who were cowering near the woodpile. Doors were open now, and giants were stirring. 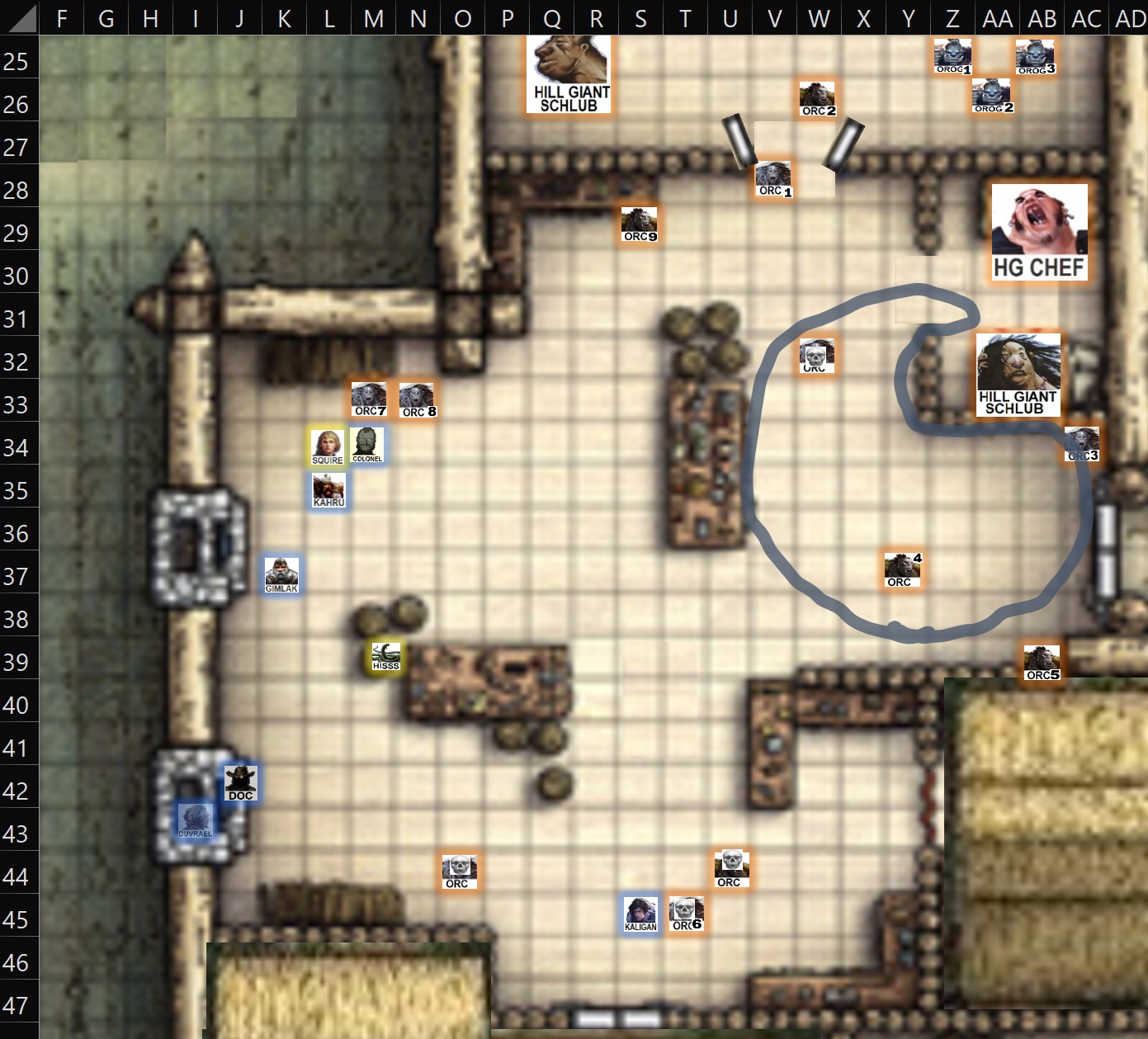 Though wounded by Doc, an orc was heading for the south door, holding a large knife. Kaligan headed it off - it swiped the knife at Kaligan, who side-stepped and cut it down without mercy.

There was no fun in slaughtering orcs, and it seemed unwise to waste effort on kitchen hands when they had come for giants.. But Kahru’s companions had chosen violence first instead of trying to get more information.

Kahru pulled his handaxe from his hip, standing menacingly above the two cowering orcs by the wall then looked north to the door the escapees were fleeing to.

The druid focussed on the dire wolves he had seen outside and conjured two them into the open doorway, “none escapes!” he echoed the Colonels call as he issued commands to the animals “knock them down and bring them back, live”

with the spell cast he then barked down at the intimidated orcs “stay down, how many giants here?

Its now obvious to Gimlak that the remaining orcs must be prevented from opening additional doors and alerting giants. He sees that an orc left the darkness, and grumble a bit as he strikes it with his mind.

Kahru summoned dire wolves, who appeared and began toying with the orcs who were escaping northward. They grabbed them and shook, but were not trying to kill. Kahru's wolves were lighter in colour than the ones outside - as if they had a light grey winter pelt. One of the orcs managed to kick hard at the wolf's nose, while the other orc was tossed on the ground.

Gimlak saw that one of the orcs that had escaped his swirling darkness had found his wits and was about to head for the door to the courtyard. There was a gaint, and a number of enormous wolves out there, Gimlak knew, so he attacked the orc's mind. Maybe it was the terror, or perhaps the stupidity, but the orc resisted him. So he reached out with his mind and pulled the orc back into the darkness, where unmentionable creatures consumed him, to the sound of gnashing teeth.

Supporter
The Colonel moves in hopes of keeping the doors shut, but he sees that two orcs have already reached the doors and open them. He curses. Perhaps, though, if they can clear away the two orcs, the doors can be shut before others come through.

“you might get bit, you get too close” Kahru warned the squire away from the prone orc and the large menacing wolf that was looming over the top of it, should it try to escape.
“And look to your right old man he continued addressing the colonel and anyone else in earshot.
The Barbarian could see that the Colonel was heading towards the door but was also mindful of the commotion in the corner and the two giant shapes emerging from the shadows there…
Last edited: May 14, 2022

The Colonel and Donnel crossed the room, and the Colonel shifted into a wind that blew past Kahru's dogs to the doorway, where he called flame down on a fleeing orc. Shockingly, the orc dove under the table, and was spared. The Colonel could see two giants and three very tall orcs (orogs) that were getting up from sleeping pallets and gathering weapons. He made to shut the doors, but they were very heavy and would take all his efforts to close. (ooc: an action!)

Then there was a shriek from the small (by giant standards) room at the back of the kitchen, and a giantess called out (in giant): ::EEK! Da kichun is infested with smalls! Killum, Husband! Kullum dead!::

A bald hill giant with bad teeth peeked out, wearing nothing but a heavy leather apron he had hastily donned, improperly tied at the back. He saw small-folk coming out of the fireplace and his face went dark and red. ::Nod in my kichen! You smallies godda die!::

He rushed across the room, vaulted the central table, while grabbing a two-foot-square cleaver off an enormous knife-rack. As he came, his shoulder brushed through Gimlak's darkness, and something left teethmarks in his bare shoulder. ::AH! It bided me! Now yoo really gonna hurd!::

While leaping the table, the giant knocked pots, pans, and a heavy stone mortar-and-pestle to the ground. Unfortunately for Donnell, he was the closest target of the giant's wrath. He held up his shield as the giant hacked into it, but it only stopped one blow before the second chopped a big notch into the shield, and nearly taking the lad's shoulder. The lad bravely stood and stabbed at the giant with his rapier, scratching his tattooed arm. 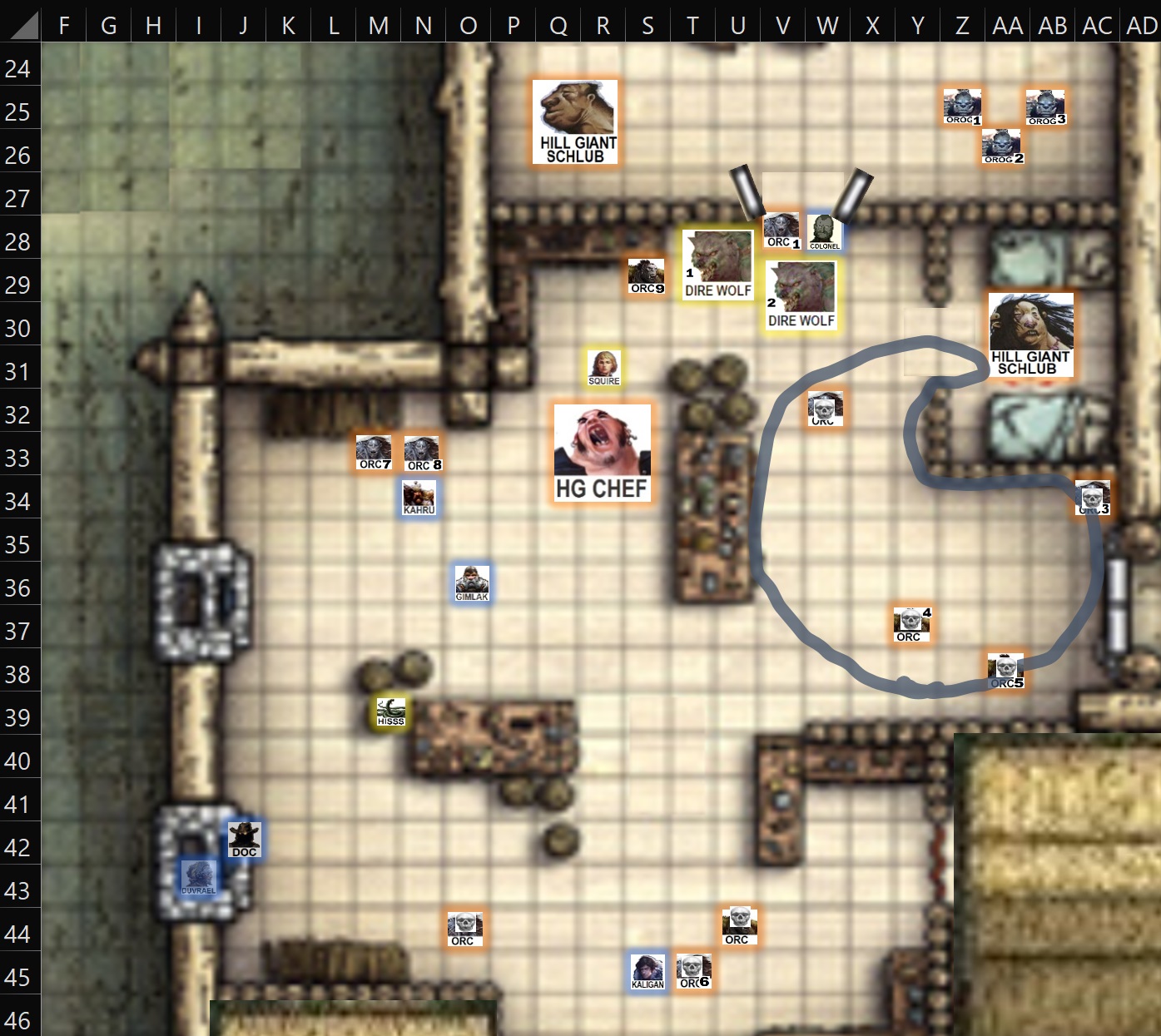 Doc appreciates the quickness and vicious dispatch of his companion, Kaligan. There's one that has unyielding justice on his mind. Kaligan seems to have things well in hand, so Doc begins to focus the wrath of the hatred within him on that towering blackhat as he walks stridently toward him.

As Doc reaches position he carefully aims his Peacemaker at the Hill Giant Chief and fires twice.

As Doc shoots the Tall Rustler, he sends a tortured soul on the haunted bullet, which launches itself into a nearby orc and burrows within.

Ah, the rush of battle! Duvrael smiles as he, invisibly, watches allies and enemies going for each other's throats in an explosion of violence and blood, while he quietly saunders between the warriors.

The orcs are a nuisance, and not for a moment does the yuan ti wizard worry about his companions' ability to stop them. No, the real trouble are the giants, and here they come now; a big brute with a cleaver sharper than its intellect can ever hope to be. A good candidate for a fireball, or perhaps that clever enemies abound spell he found in the late Master Gyrwin's spellbook at the library?

Looking for a good aim and finding none, however, Duvrael does not pay as much attention to his surroundings. He inadvertently knocks over a giant fire poker, which clangs loudly as it falls to the ground. Now rushing, there is the sound of hurried footsteps as Duvrael sprints towards the north wall, hoping to reach the chamber beyond for a fiery surprise to the occupants.

Doc stepped out of the fireplace and strode forth, firing his gun at the giant. Though his bullets were magical in nature, they behaved like bullets: One struck the giant just over his eyebrow, and the bullet grazed off, leaving a bloody welt. The second hit a metal utensil tucked in a pocket of the giant's leather apron. This one made a lout ping! and careened off with a spark. A ghostly apparition appeared and flew into an orc, who was struggling with one of the wolves, and his eyes went wide in pain and panick.

Duvrael invisibly (though not stealthily) crossed the room. When he got to the northern wood-pile, it was evident that the two surrendered orcs there knew that some invisible thing was nearby them. However, they had know idea what it was, and they cowered from it, so far still acting as obedient non-combatants.

Inside the little bed-room, the cook's wife rummaged under her bed and produced a few rocks about the size of a man's head. She held them under one arm while she threw one at the Colonel, yelling (in giant) ::I'd squash yoo ugly smallie, but the stains won't evah come out! Git! Git oudda here!"

The rock struck the Colonel squarely, and almost bowled him over. 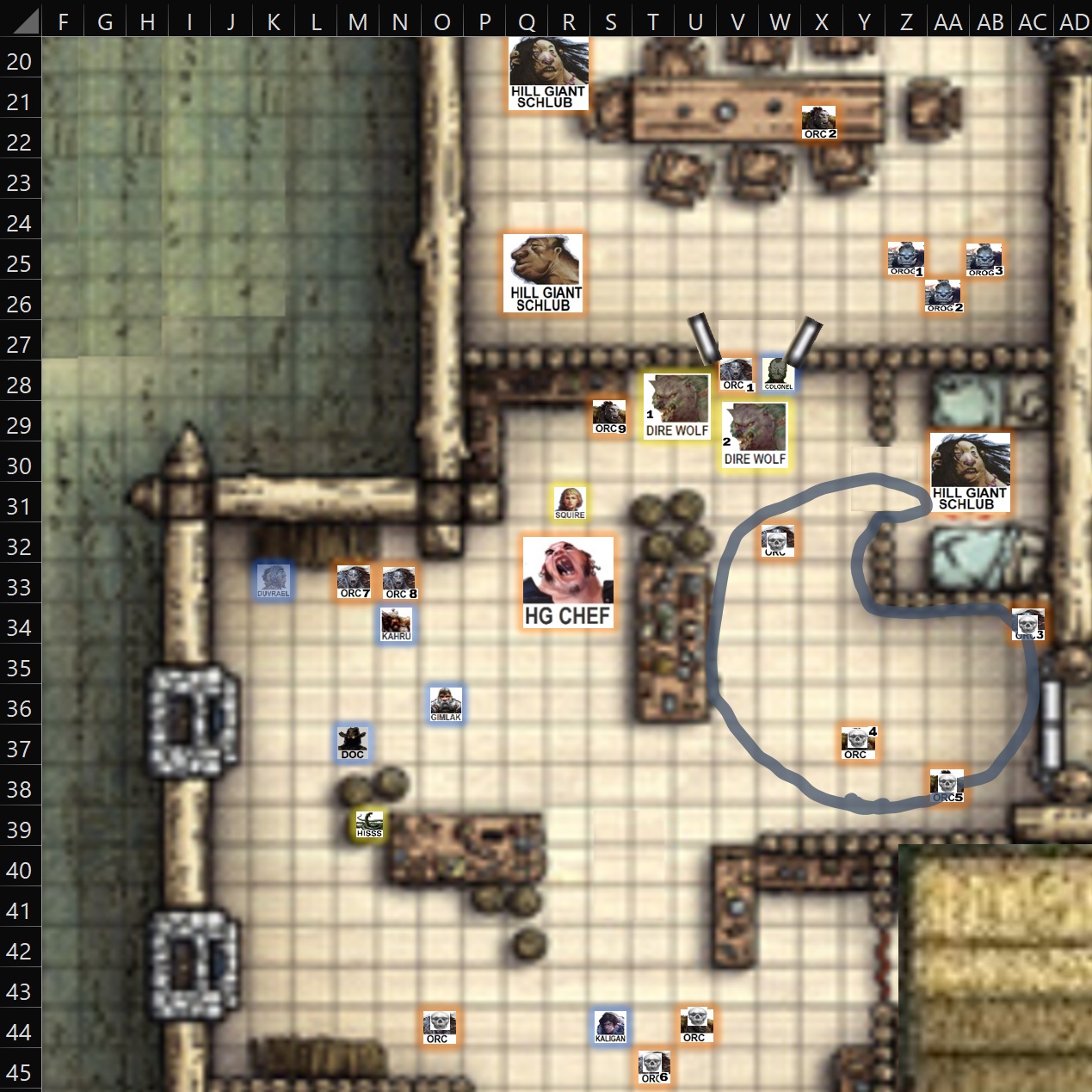 Gimlak respectfully looks at Donnel and telepathically says Glory to you and your ancestors! Not many a youth would have survived a giant's attention! He knows the lad won't last another volley, so Gimlak concentrates and lashes at the giant's mind and then telepathically says to Donnel: Come to me now or you may not see another day!
He then moves to put more distance between himself and the fighting.

Kaligan sees the Colonel's squire in danger and that the south is secure as all the orcs are dead, so he literally springs into action. With a telekinetic leap he quickly lands in front of the giant and swings his blade. Unfortunately Kaligan underestimated the distance by a few feet causing his first swing to miss badly. Keeping a cool head under pressure, Kaligan quicky adjusted his attacks and his second swing bit home, this time powered by psionic energy.

Gimlak attacked the giants mind, while telepathically telling Donnell to use the distraction to retreat. The giant held its head with its free hand, yelling ::Aagh! Dey hurt me brains!:: as Kaligan flew over his head and landed next to where the squire had been, as the lad did as he was told. Kaligan stabbed the giant once, and its fat suddenly rippled like the rings made by a stone in a pond. The giant stumbled back, falling on his behind, and he slid along the dirt floor until he arrived, seated, in front of Kahru.

When Kaligan sees the giant come to a stop, prone in front of Kahru, he thinks to himself, "Maybe now the Barbarian's mood will improve."