Duvrael, Kaligan, and the Colonel's flying trident engaged in a ferocious battle in the corner of the kitchen. The orogs thrust their pikes as the wizard flung fire and the psychic warrior cut, thrust, and parried, defending them both.

The colonel had shocked one of the orogs with lightning as it passed him by and he tried to reach for the door to close it, but the giants were in his way and one of them slammed a chair into his shield, knocking him back a step.

Gimlack moves behind Doc, and Lashes at the remaining Orog's mind

Gimlak did some mental shuffling, reorganizing his psychic powers and concentrating on the sphere of horrid darkness. He made a weak attempt to spike the mind of one of the orogs, and found it easy enough to get in. The orog was distracted enough that Kahru's dire wolves made their move: They pounced into the fray, knocking down and mauling the remaining orogs.

Now the only enemies who remained were three ugly and stupid-looking giants: The chef's wife with her rocks in the little bedroom, and the two who were swinging chairs through the door at the Colonel, slamming them into his shield. 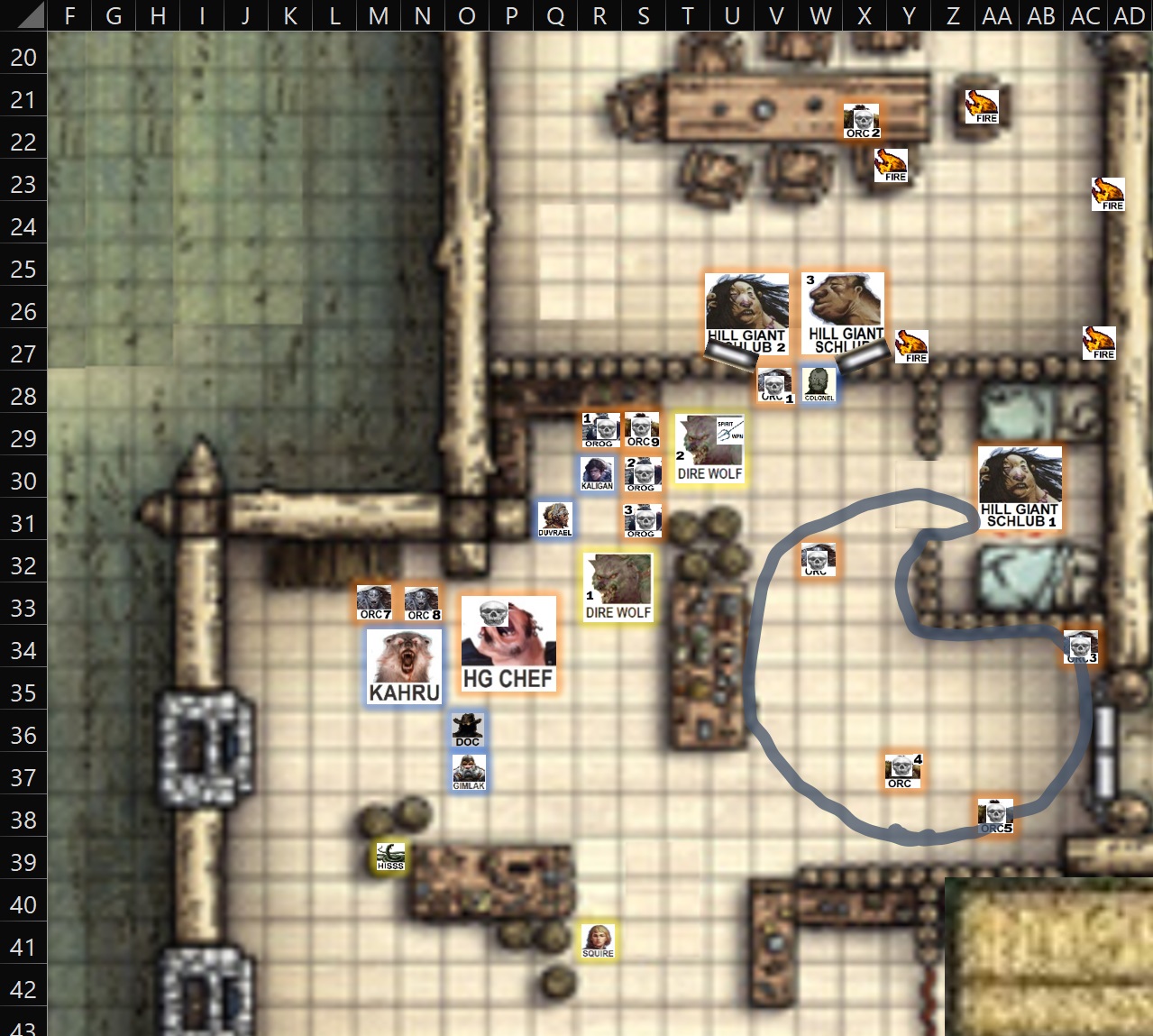 Kaligan sees the Colonel standing alone against two giants. Making a quick decision, he moves quickly to the Colonel's side. Kaligan's longsword darts about and bites into the Schlub not once, but twice. During the skirmish, Kaligan spares a moment to glance back towards Schlub #1 and telekinetically pulls it into the darkness.

Kaligan moved to the north to help the Colonel. He stabbed one of the two giants in her fat belly with his sword while shielding himself from her swings of a big oak chair. In the small room, the chef's wife was preparing to throw a rock at the gunslinger, and Kaligan telekinetically yanked her arm, pulling her into Gimlak's darkness. The rock thumped to the floor and she pulled herself back out yelling, ::Aaah! It bited me!::

With the two schlubs blocked behind the doorway by the Leaper and the Colonel, Kahru moves towards the giants wife, over the corpses of the fallen orogs attacking her with tooth and claw

Tonguez said:
With the two schlubs blocked behind the doorway by the Leaper and the Colonel, Kahru moves towards the giants wife, over the corpses of the fallen orogs attacking her with tooth and claw.
Click to expand...

As Gimlak moves forward, he focuses his mind on the giant that has not been wounded yet by Kaligan, and he helps the bear move a bit more forward.

Duvrael hardly acknowledges Kaligan's actions that saved him from the wrathful orogs, although the wizard makes a mental note to treat the human as a near-equal later. A protector is useful, particularly in a fight.

Those giants need to be taken care of first, however, and the yuan ti is glad to see the female one, whose very words hurt his ears, move away from the magical darkness and straight towards a magically propelled bear ally.

Not even moving from his spot next to the corpses, Duvrael starts intoning a monotonous hymn that sounds more like a dirge than an incantation, and ends with a complicated gesture with his left hand.

Across the room, the spectre of a snakeman appears behind the giantess, translucent and insubstantial as smoke. It places its spectral hand on the hill giant's shoulder, where it seeps life energy from it. When the spectre vanishes, the hand remains...

Doc feels the stone of the Chef's wife. Unperturbed, he adjusts his hat and strides quickly toward her, firing his gun.

Kahru dropped onto all fours and bounded across the room, knocking his wolves aside who stayed, mauling the corpses of the dead orogs. Gimlak saw that the northerner would come very close to being harmed by his black sphere, so he gave the bear a telekinetic shove. While doing so, he gave Kahru the extra leap that he needed to reach the giantess, who had tucked herself behind the wall of her little room. The bear scratched and chomped at her as she hollered.

Then Gimlak turned his attention on a giant in the north door. He found it exceedingly simple to reach into its mind, and plant a psychic sliver that would harm the giant's focus, leading to foolish mistakes. These giants were already fools.

Doc strode forward, adjusting his hat. As he stepped near the dead orog, the dire wolf dragged it away growling, as if the gunslinger would steal his kill. The wolf recognized an alpha predator. Doc raised his gun and fired two shots, which made their strange dull ghostly thumping noises. They were not easy shots - the chef's wife was trying to hide from Kahru behind her bedroom's log-wall; the bear was framing the open doorway, reaching through to get at her; part of the doorway was covered by Gimlak's hungry darkness.

Yet still, the ghostly bullets fired true, striking the giantess in the chest. She staggered back, clutching at the wound and her hollering died to a wheeze. Then she collapsed backward onto her dead husband's bed.

Duvrael had been starting to conjure a spectral snakeman behind her. As she fell, he frowned and flung his outstretched hand to the left, and the spectral snakeman appeared instead behind a giant in the north room, touched it with a ghostly hand, which caused the giant to startle and look about in pain and confusion.

The Colonel had been doing the hard work of holding the door before Kaligan showed up to help him. He had tried to stop the orogs making it through; he had tried to close the door. Neither had worked out in his favour. He sent a blast of destructive energy through the door, hoping to drive the giants back, or to knock them prone. While it thundered in their faces, pummelling them hard, they both stood when it calmed, still holding cracked and battered chairs.

Kobold Stew said:
Yes -- sorry. It's really the damage done, which should be substantial in the last round (and might change some of this round's actions?
Click to expand...