Supporter
The colonel is determined to hold the door as long as he can, to prevent the two Hill giants making their way into the room. Slowly he pushes them back, as he slowly wears them both down.

The Colonel pressed the attack into the servant's mess, driving the giant back, who hopelessly slammed a chair into the Colonel's shield. The old soldier followed the giant into the room, calling his flying trident to further harry the enormous thug.

Donnell had removed his shield while retreating down the room, and he drew his short bow and sent an arrow northward. His desire to not accidently pierce his allies sent the arrow above the door, where it stuck into the wood.

Gimlak and Donnell were the only ones to notice the door to the courtyard open. No one could see it, with Gimlak's orb of hungry darkness there (which started to chew on the doors), but the giant that had been patrolling the courtyard opened the door, and seeing nothing but blackness, stood there agape and said ::Whah the...!?:: 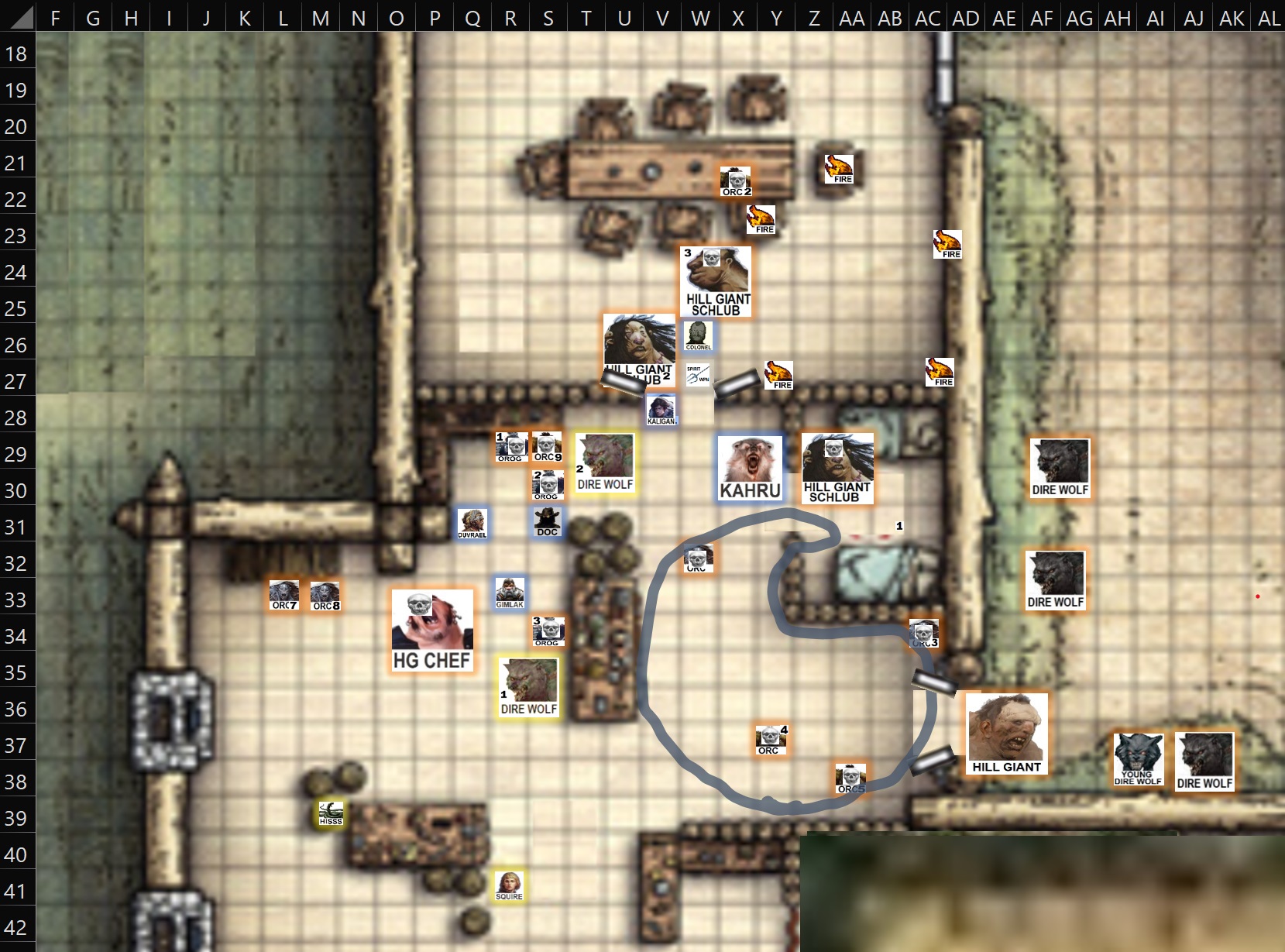 Supporter
The floating trident downs one of the schlubs, and the colonel blasts divine electricity through the other, causing it to fly back from the door.

He then returns to the main room, when he hears the main door open.

Gimlak smiles with satisfaction as the giants’ minds are easy to manipulate. He continues harassing the same giant with mental pain.
He also warns his companions “I think the doors to outside are open, we’ll have more company!”

Upon hearing Gimlak's warning, Duvrael's mood sours. Inside they have the situation under control; not long before those last giants are dead, he's sure. It'll be a whole different game if combatants from outside are coming in.

Turning to the cowering orcs behind him, the yuan ti addresses the closest one with the subtle magical manipulations his people are feared for.

"You don't want that giant outside to think you're partly responsible for this mess," he says in the Giant tongue. "Why don't you convince it there's no need to come inside?"

The kitchen was a slaughterhouse, Kahru the bear gulped down blood and the flesh of the giant-wife and looked about the kitchen behind him.
It made sense to the druid to follow the Colonel and the Leaper through the north door, but it was crowded and Kahru still had his two surrendered orcs to deal with - he had promised to let them live.

Making his way back to the orcs, Kahru passed by his feasting wolves and transformed back to human form, staff in hand should its magic be required.
It was only then that he heard the dwarfs warning and then Duvrael turning to the surrendered orcs, for them to head off the new arrival beyond the hungry shadows.

“protect the boy the druid commanded the nearest wolf(1), pointing down towards the squire and sure the wolf understood what that might mean.

Hearing the giant who opened the door, Kaligan fights with renewed urgency. We can't afford to be fighting giants on multiple sides. Unfortunately, Kaligan's urgency causes him to be a bit sloppy and he misses the proverbial broad side of a barn with one of his attacks.

Doc sees that there is a sole giant remaining. Black Hat needs to go down. Doc focuses his fiery hatred on the last living rustler, moves over some barrels to get a better shot, and lets loose the furious vengeance of the Peacemaker upon him with a grim satisfaction.

The Colonel downed one of the hill giants with his flying trident and threw the other a few steps back with lighting. Smoldering, it tried to follow him as he retreated, but was intercepted by Kaligan. Kaligan managed a shallow stab to its thigh before the chair smashed into him driving him on the defensive. Gimlak spiked the mind of the remaining hill giant with little effort, then warned the others of the open door. The giant dropped its chair and held its head, and Doc walked up and shot it in the chest, and it fell to the floor with a loud thump.

The Colonel had told Donnel to "get in there". The lad hesitated. Get in where? The dwarf's black bubble of darkness blocked the path to the door and was eating people! He raised his bow and aimed for the darkness, trying to visualize where the door might be, imagining a giant standing there. He hesitated, and Duvrael charmed an orc, who crossed the floor and yelled to the door, ::We burned da bread! Dat's a cloud o'smoke blockin' the door. Stay back, weez gonna blow it up da chimney!::

The ruse seemed to work for a moment, then the giant slowly said, ::Hoos dat talkin' den? Shur don't smell like smoke!::

So Donnell let his arrow fly. Though he had made careful aim, the arrow struck heavy armour. The giant rushed forward, moving through Gimlak's darkness. By the time the giant was through, he had been chewed on by the horrible creatures within, and was enraged. He raised a great axe overhead - much better armed than the usual hill giant - and would have made quick work of Donnell, had it not been for Kahru's wolf, who leaped forward and took the blow, sacrificing itself with a pained howl. 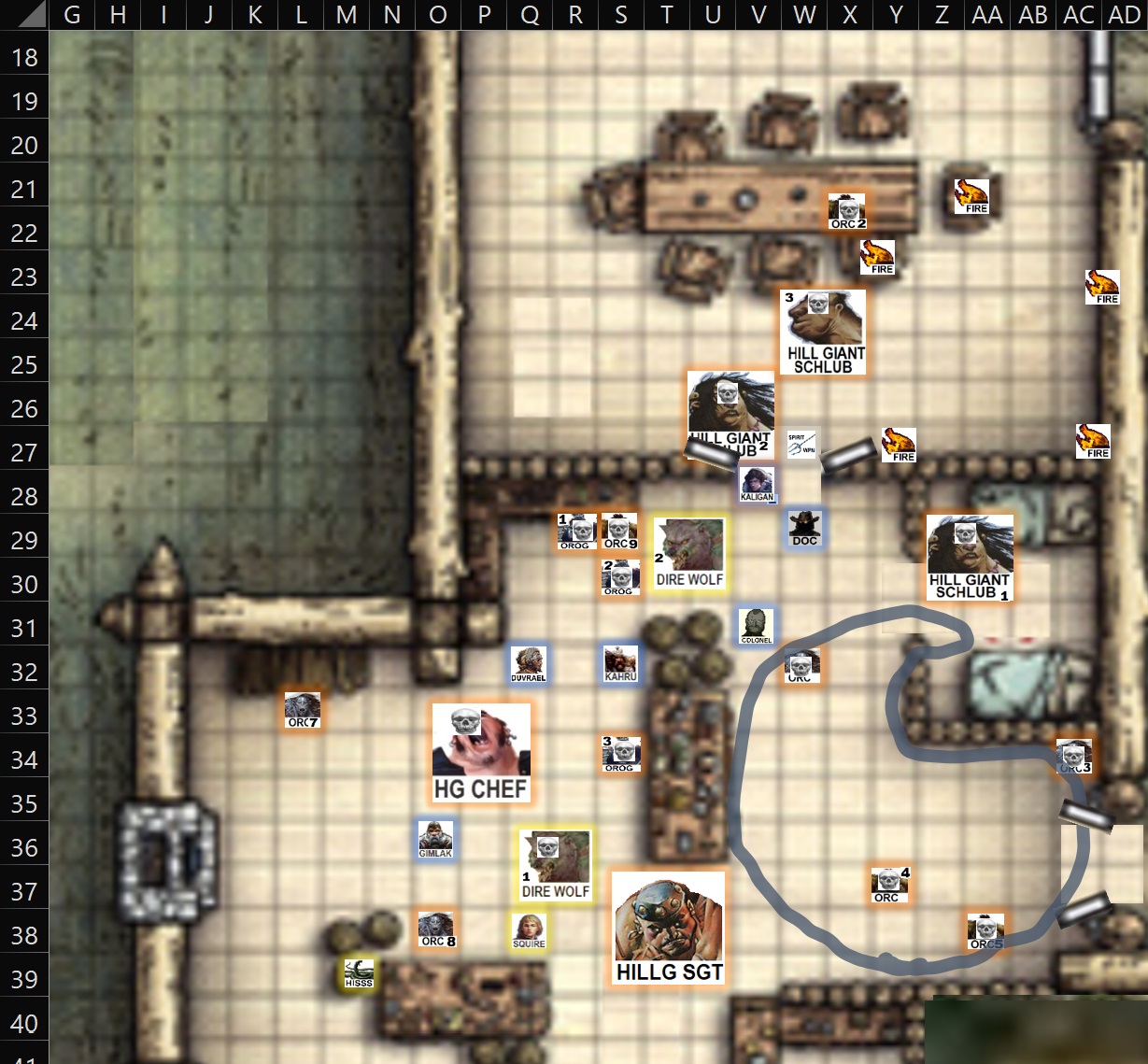 “Get up through the north door, t’ next room“ Kahru bellowed his command to the surviving wolf and surrendered orcs, also hoping that the squire and others had the presence of mind to retreat with them.
The death yowl of the slain wolf echoed in Kahrus belly and the druid focussed his fury down into the ground until the erupting earth churned up beneath the giant guardsman’s feet.

Gimlaks hungry shadow might be a trap for any attackers, but it was also restricted the freedom of the defenders. Withdrawing to the room north would allow them to barricade the door and space to regroup and recover. The broken ground left behind would hinder any who tried to follow them.

Moreover the druid knew that it was dire wolves that lurked outside the door, beyong Gimlaks shadows and even if they aligned with the giants, Kahru did not believe they deserved the cruel sting of the shadows unnatural horrors.


His intention was to find a way to approach the dire wolves from the rear, befriend them if he could
or at least open the gate and offer them freedom…​
but first they had to get through the northern door

Knowledge is power, Duvrael thinks to himself as he remembers betraying his yuan ti brethren so long ago in order to study magic and advance his personal power. He takes a bit of bat fur out of his bandoleer, rubs it between his thumb and forefinger while intoning the relevant arcane phrases from the late Master Norriander's hide-bound tome on divinations.

Just like the first time he had cast it, nothing seems to happen. Then the wizard mentally receives visual information from a small, invisible floating eye further in the room, which takes some effort to process alongside his regular vision.

Moving up to the northern room, Duvrael has to focus on not tripping over the dead bodies and the very much alive dire wolf, as well as not mixing the two images of the same room, but he manages to reach the doors.

Karhu left temptation behind when his wolf fell, instead ordering a sensible retreat. As Duvrael made his way toward the living wolf, it left its chew-toy behind and bounded toward the northern room. Donnell also retreated, hustling over to the Colonel's side, where he belonged.

Duvrael sent his eye through Gimlak's blackness - a sobering experience - and out the doors into the courtyard. It was dark under cloud-covered skies, and the only potential opponents he saw were the four dire wolves. While the wolves were curious, their heads up and ears perked at the sounds in the kitchen, three of the floor were still seated, as if they had no plans to enter the kitchen without express permission.

Inside, Kahru caused the dirt floor of the kitchen to erupt, sending a shower of dirt and rocks up under the giant's armour, pummelling his groin. The giant stumbled and grunted in pain.

Gimlak reached into this new Giant's mind and attempts at interfering at his plans. He also mentally tries to push it back into the darkness, if not partially, before also moving to the north room.

Kahru snarled in satisfaction when the giant stumbled, though it didnt fall as the druid had hoped.

He watched as the wolf and others moved towards the north door, covering their retreat and ready to follow when he was sure everyone was safely pass the rum barrels...

Gimlak found messing with the giant's head was much easier than moving his body. The giant refused to be shoved back into the darkness, and instead, it stumbled toward him, its feet caught up in Kahru's rocks, and the bodies of the dead.

::Geddowda my head!:: the armoured giant bellowed through gritted teeth.

I will remain and hold the door until the others are past him into the north room. If the giant comes to me I will attack it.