TSR Hobbies (UK) published Imagine magazine issue 1 in April 1983. It is 52 pages long and has a cover price of £1.00. In this issue, we have a D&D mini-module, aids for RPG beginners, and lots of news & reviews! 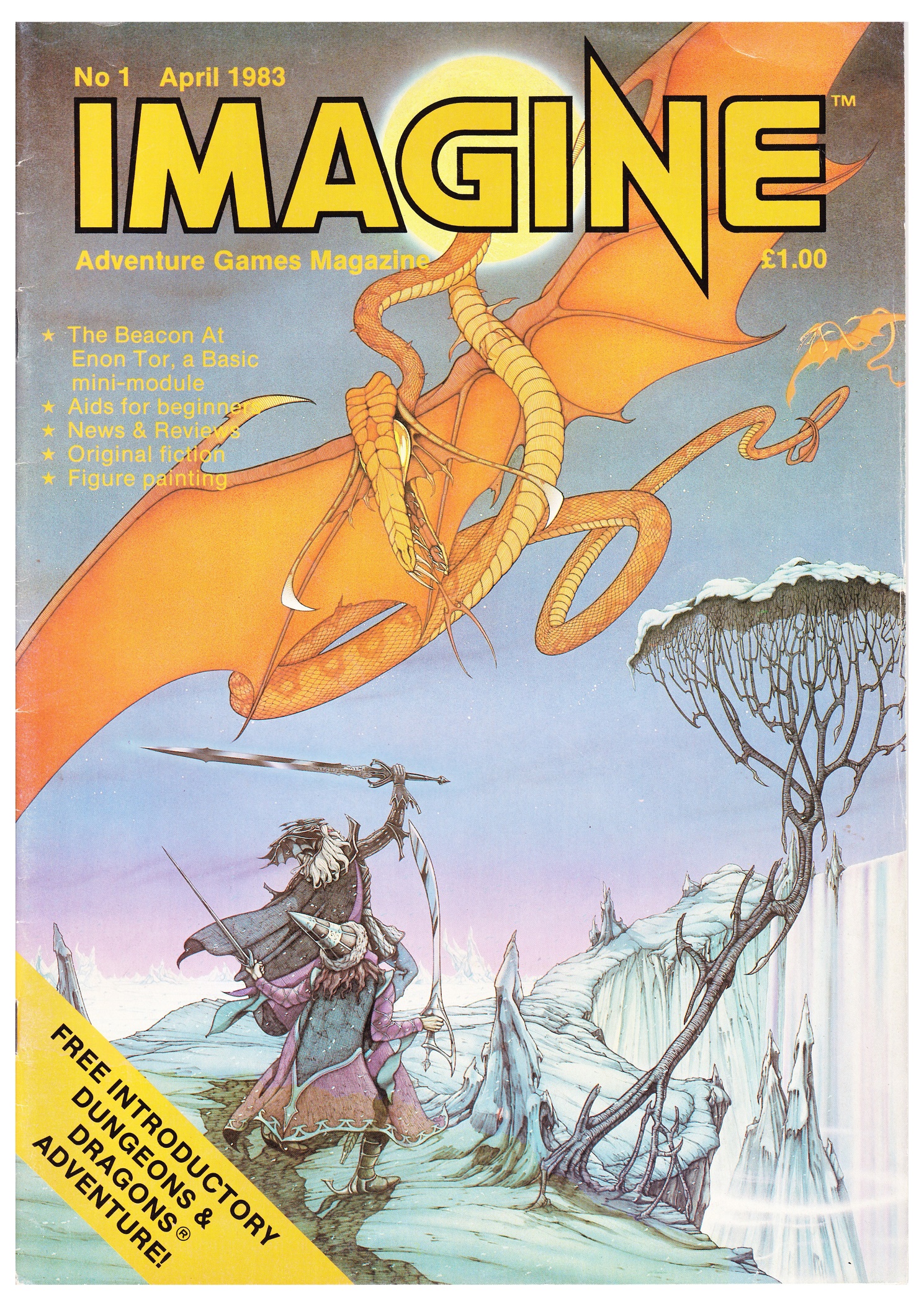 "You are now perusing the very first issue of the new magazine published by our sister company, TSR Hobbies (UK) Ltd... This magazine will principally cater to the thousands of role-playing game enthusiasts in the United Kingdom, and the rest of the world too. Its contents will stress new ideas, information, and new products... I predict IMAGINE magazine will quickly become the leader in its field in the UK."
Click to expand...

Gygax's prediction was misguided. Imagine lasted for just thirty issues and never made a profit for TSR. Gygax later said his original plan was for a UK-branded version of Dragon magazine, which would have included about 50% recycled articles and 50% new local content. However, his idea was overruled by the board and UK management, who opted for a primarily original magazine.

We next hear from the editor, Keith Thomson, who says:

"We have had scores of letters with ideas for the magazine sent to us from players over the last few months... We think the magazine will show we have listened and give players the advanced information and games ideas they ask for. IMAGINE magazine is aimed at a wider audience than just existing players, however. There are millions of people still to be introduced to the world of role-playing. This magazine will try to make that introduction a little easier, with regular features aimed at the new player and the potential player."
Click to expand...

Roughly 16 of the 52 pages are devoted to ads, which seems pretty typical of the era. Let's go through the articles one at a time.

"The Beginner's Guide to Role-Playing Games" is uncredited and provides a short "actual play" transcript of a D&D game. It's all reasonably obvious but no doubt helpful to beginners. We then have "Stirge Corner" by Roger Musson, a planned regular column aimed at the "the no-so-experienced adventurer." In this debut article, he discusses his first "bewildering" encounter with Dungeons & Dragons. Musson also contributed to White Dwarf and had creatures included in TSR's Fiend Folio.

"QB-161-01: ANTARES" by John E. Black is a story about a man who enters fantasy worlds using a virtual reality device--but soon learns this habit has consequences in the real world. The story didn't grab me, though it may have been one of the earlier fiction pieces to explore this topic. It wasn't helped by the layout, which put line spaces between every paragraph! I can't find that John E. Black contributed anything else to the gaming scene.

There are several book reviews by David Pringle, editor of Foundation: The Review of Science Fiction, who later became editor of Interzone. Let's run through the reviews quickly. Myths of the Near Future by J. G. Ballard contains "ten vividly ironic stories, all narrated in a rich angular tone." In Viriconium by M. John Harrison is beautifully written, "in language of an intesnsity rarely equalled in modern writing." And The Fifth Head of Cerberus by Gene Wolfe is "a deeply imaginative and moving book."

There are three non-fiction books reviewed as well. The Science in Science Fiction by Peter Nicholls is "an excellent and timely work of non-fiction." What is Dungeons & Dragons? by John Butterfield, David Honigman, and Philip Parker is "an engagingly well written work," while Dicing with Dragons: An Introduction to Role-Playing Games by Ian Livingstone is a "weightier tome" and "recommended."

"Illusionary Script" by Gordius is a page of riddles and logic puzzles. There is a solicitation at the bottom of the page asking for more submissions, so the editors intend to make this a regular column.

"The Beacon at Enon Tor" is a "mini-module" for Basic D&D, comprising a well-crafted but straightforward 13-room tower adventure. The designers were Michael Brunton, who later worked on Warhammer, and Graeme Morris, a TSR Hobbies (UK) staffer who worked on many products, including the celebrated "B10: Night's Dark Terror."

Morris also edits a four-page "magazine within the magazine" called the "D&D Players Association News," which used to be a standalone newsletter for the UK D&D Players Association. Alongside Morris's editorial, called "Pan Pipings," the mini-magazine has three features. In "Dispel Confusion," Morris and Brunton answer game questions, much like "Sage Advice" in Dragon magazine. "Rubic of Moggedon," by Runic Press International, is a comic strip. Finally, "Turnbull Talking" is a soapbox for Don Turnbull, the Managing Director of TSR Hobbies (UK) and a kind of godfather figure to UK hobby gaming.

"Tavern Talk" by Pete Tamlyn intends to "provide some well-deserved publicity for the amateur side of the hobby." Tamlyn later garnered an impressive list of RPG credits, including work for the Advanced Fighting Fantasy RPG.

There are two game reviews. Star Frontiers by TSR Hobbies is "one of the best presented games" the reviewer has seen. Meanwhile, the Judge Dredd board game by Games Workshop is a "winner," although the ultra-violent theme limits the broad appeal.

And that's a wrap! It's certainly a little rough around the edges when compared to Dragon magazine, but there is plenty of promise as well. The highlight for me was the mini-module. Next month, we have the barbarian class by Gary Gygax, lots of game reviews, and a new adventure by Graeme Morris!
Click to expand...

Thanks for the time spent on this type of article. This certainly brought back memories: I always liked Imagine, though it never quite rose to the heights of Dragon. I do remember the really annoying Tavern Talk articles that started appearing later on...they just seemed like cliquey back-patting from the Cambridge area group, but other than that, it was a good magazine.

How is the introductory adventure "free," exactly, when you're paying for the magazine?

This $500 box contains a FREE Playstation 5!

If I were to guess, because Imagine Magazine was owned by TSR, it's probably more accurate to call it an "official" adventure vs. a free one. But the idea being you were getting an official adventure from the company that made D&D along with a magazine, which was unusual.

Dragon Magazine would do something similar with mini-games and adventures, but not every issue included one.

But yeah it's definitely marketing speak to try to make you think you got your money's worth (the included adventure is a "mini-module" so there's that too).

Pellinore was excellent in future editions ( and they even made Dragonquest adventures!)

The real play example features women.....that's interesting for that era, given where we were. I mean, the DM is a woman. That must have annoyed some losers.

Perhaps and Gygax himself has written things about gender and TTRPGs that, uh, have not aged well.

But in 80s, when I got into D&D, we always had women in our gaming groups. I realize that the numbers show that it was a very male dominated hobby in those days, but I also feel that the gender imbalance was greater among the creators of gaming materials in those days than among the players. But maybe I lived an anomaly.

That cover is great with a slight nod to Elric in appearance in my minds eye.

EthanSental said:
That cover is great with a slight nod to Elric in appearance in my minds eye.
Click to expand...

Great article. For the inside track on the rise and fall of Imagine, we covered it on the GROGNARD files podcast a couple of years ago. We had an interview with Paul Cockburn, who was the actual editor (he probably wrote the editorial you quote). In a later episode we talked to Mike Brunton, shortly before he passed away. 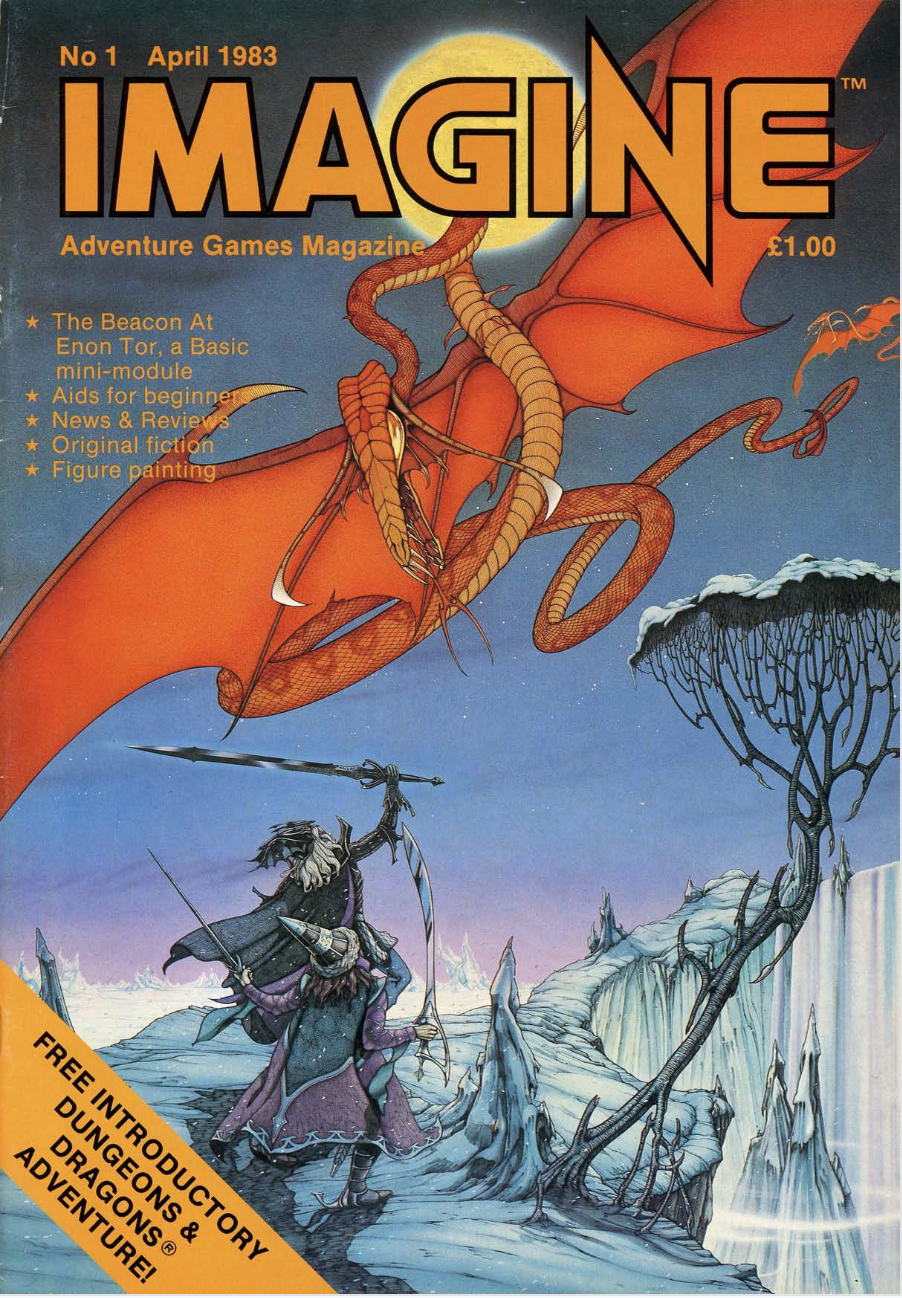 Download Episode RSS Feed 0 INTRO We have been hard at work producing the GROGNARD files fanzine for Patreon backers. There are still a few hard copies available for new $3.50 backers. They are lim…

Ah, Imagine! Probably my favourite D&D(+) magazine growing up. As John R Davis mentioned above, several later issues feature Pellinore, a really fascinating campaign world developed in and for the mag. Imagine also featured two of Neil Gaiman's first professional short stories, IIRC. Like a lot of TSR UK products, Imagine felt less slick than its US equivalent, but made up for it with delicious quirk.

This led me down a long rabbit hole. Anyone know how to get Game Master Publications PDFs? Or more on Pelinore (than what is in Imagaine)?