D&D 5E Is the map in the Theros book good?

robus said:
I finished up setting the last quest of my long running campaign in my version of Theros, so I’m naturally intrigued by the new Setting book. But I would like there to be an evocative map to go with it.

Does the book include such a thing? If it does, is it possible to get it as a PDF for printing?

The dndbeyond version has a map you can download.

Theres one on Google and its better looking at like this than in the book, which is contrary to everything I believe in.

Supporter
Some of the things that kill me about the Theros map and which make me think it was just tossed off with little to no thought are as follows:

- They have 'Meletis Harbor' on the west coast of the peninsula, but the city proper on the east coast. Seeing as how there is nothing out west on the Siren's Sea except random Dakra islands

- One-Eyed Pass is supposed to be a pass through the mountain range that Akros has an outpost on to keep an eye on the cyclop population. But the map puts One-Eyed Pass so far north that nobody would ever actually be that far up to take the stupid thing (except for any minotaur bands trying to get into leonin territory.)

- Pharagax Bridge is listed in the book as being on the western border of Akros spanning a huge chasm that is rumored to descend into the Underdark. But on the map it has it spanning across the Deyda River, not a chasm at all.

- Cypress Gates I'm assuming is meant to be the pass to get to the Skola Vale and the satyrs... but the map does a crappy job on the paint job to show the path one takes from Skola Vale down into the Nessian Wood. And on top of that, the icon for the Cypress Gates looks like it was just dropped in a random spot rather than being at the mouth of the true path through the mountain range to get into Skola Vale.

- There is a location on the map called 'Deyda Harbor'... but as far as I can tell no identification in the book as to what or whose harbor that is. I presume that it's meant to be for Akros? They bring goods out of the mountains down the Titan's Stair and then load onto barges to go down the Deyda River and out to the harbor? Not that the book tells us this. And then I guess the boats are then sailed across to Meletis Harbor and then brought through the canal into Meletis city itself? But then why do both harbors have different font styles and Meletis Harbor not have a diamond indicator like Deyda does?

- Anyone have any idea what Four Winds Plateau is? Or how/why there's a "plateau" on a completely flat set of plains?

I've begun actually trying to fix the map myself by moving locations around and condensing all the map borders inwards to just focus on the three poleis and surrounding areas. But even with that... I really think a new rework of the map entirely should really be undertaken by someone with good Inkarnate cartography skills.

DEFCON 1 said:
- They have 'Meletis Harbor' on the west coast of the peninsula, but the city proper on the east coast. Seeing as how there is nothing out west on the Siren's Sea except random Dakra islands
Click to expand...

I had exactly the same "WTF" thought when I saw that. Hopeless.

Supporter
Humble brag but I think I did a much better job with my Zendikar map (hat tip to person who created the world map, I just stuck labels on it ):

Now that's a world I want to adventure in.

Supporter
I keep doing google searches for other good looking blank maps that would work for Theros that I could assign the locations to, but haven't found any yet. Some people had made Theros maps based upon the CCG information, but they were islands rather than landmasses. Although granted, with the idea that you can go over the edge of the horizon and reach Nyx... perhaps I'm not giving the island Theros idea enough credit.

I may be wrong, but I gave Deyda Harbor to Akros since it is at the mouth of the Deyda river (which they control) and would be the only port the Polis would have for trade and travel to the outside world.

Supporter
I still keep googling every once in a while to see if anyone makes a new map of Theros because if/when I run a game there I'd love to have one that just makes me excited to use. Even if it keeps the kind of inane distances that the book's map has, if it at least looks cool I'd feel better about it. Granted, at the end of the day if I want to run a game there I'll go ahead and run it regardless of the map I have (because the game isn't about the map, it's about the stories the players create).

Thus far the only one I've found that has made me go "okay, that's cool"... is this Hexographer map that someone did that I found via a google image search that uses a lot of the different icons to make it more colorful (while still maintaining understanding of location) as well as adding in new named areas to fill in all the spots that were basically open land with no definition in the original map. The only disheartening thing about the map is that when saved as a .png file, the lettering of all the locations is pixelated to the point that much of it is illegible.

If I owned Worldographer I might've gone in and copy overlaid this map in order to create a fascimile of it for myself and used clearer fonts (and which would allow me to have layers to turn the names/tags on and off)... but for now if this is the best I have available for myself, then it's a start.

robus said:
I finished up setting the last quest of my long running campaign in my version of Theros, so I’m naturally intrigued by the new Setting book. But I would like there to be an evocative map to go with it.

Does the book include such a thing? If it does, is it possible to get it as a PDF for printing?
Click to expand...

Since this is posted on the MTG wiki, I see no reason why it can't be posted here (especially as you would have to squint to see details); 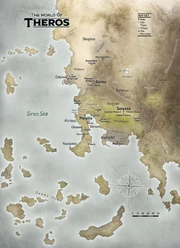 The map, IMO, is extremely boring. This map of ancient Greece has more character; 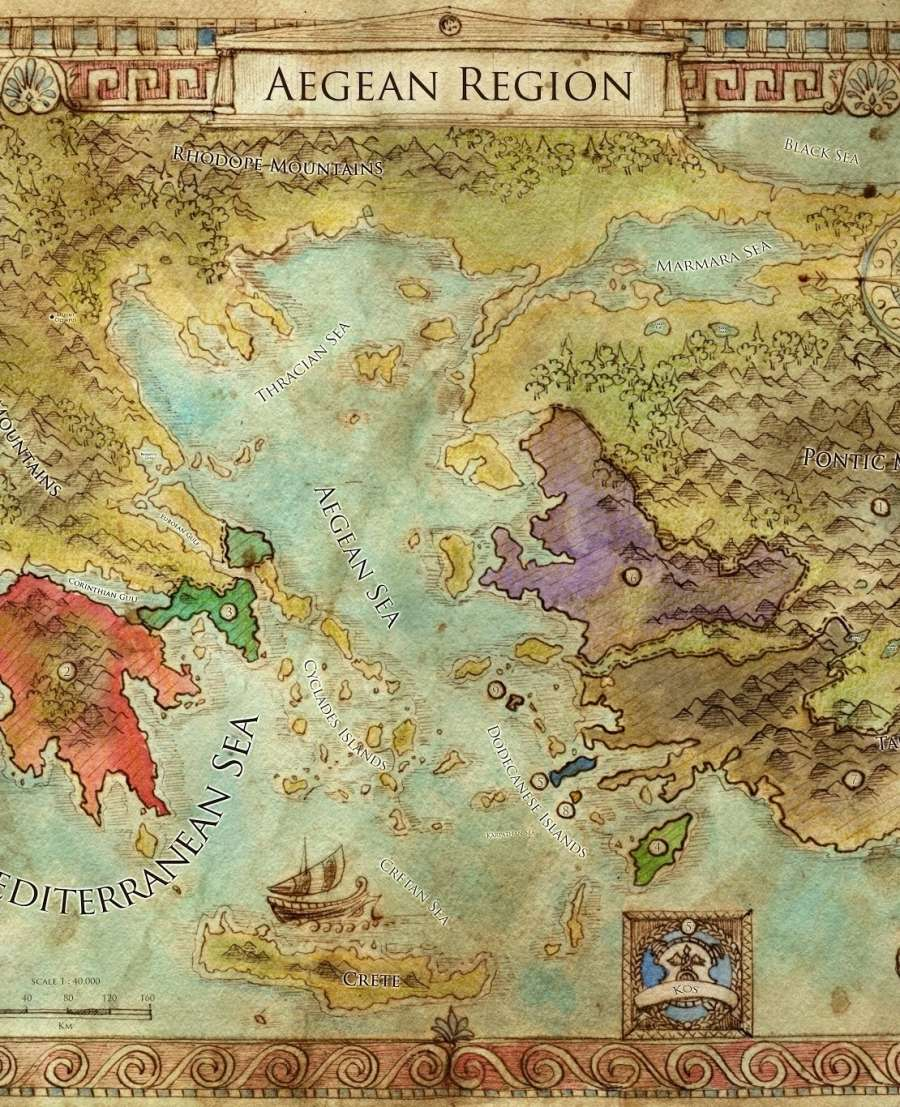 Supporter
The official Theros map is the dessicated corpse of a good map.

I did actually discover the cartographer is Deven Rue. Deven Rue, LYSK on Gods Of Theros/Mogis & Iroas | Dungeons & Dragons

Maybe the map goes by a name I'm not familiar with, but I could not find it for sale on his website; Cartography

cbwjm said:
Maybe. The map does give you a way to run an Odyssey, getting swept up on distant unexplored lands simply by having not much there. I expect a lot of people will enjoy filling in the details themselves.
Click to expand...

Not only that, but it is fairly easy to add "Not-Persia" and "Not-Atlantis" to the world map.