Whoops, forgot that true strike can only be cast on the caster.

@Scotley, Breva is up next!

@Aust Thale, Falen is on deck!

@Knightfall So that other attack vs AC 20 was a hit after all?

Tellerian Hawke said:
@Knightfall So that other attack vs AC 20 was a hit after all?

Heading to bed. I stayed up to late last night.

Let's try and "fix" this trap again. we will have better luck, I think.

ScottDeWar_jr said:
Let's try and "fix" this trap again. we will have better luck, I think.
Click to expand...

@Aust Thale, since Tuck and Vinny already know where the trap is located, Falen doesn't have to find it first. I'm rolling for you...

I was going to do an aid another:

ScottDeWar_jr said:
I was going to do an aid another:

I don't think more than one person could use Aid Another on the Disabler Device check, but it didn't matter. Falen disabled the trap.

My character was completely unprepared to do a crawl!

Waiting for more posts from you guys until I have 'the voice' speak again.

Here is the battle map for the Portal Room...

Note that I've placed Akos and Vinny is the spots where @Neurotic and @ScottDeWar_jr hinted they wanted their characters. Let me know where you want your PCs to be, if you want me to change their positions. 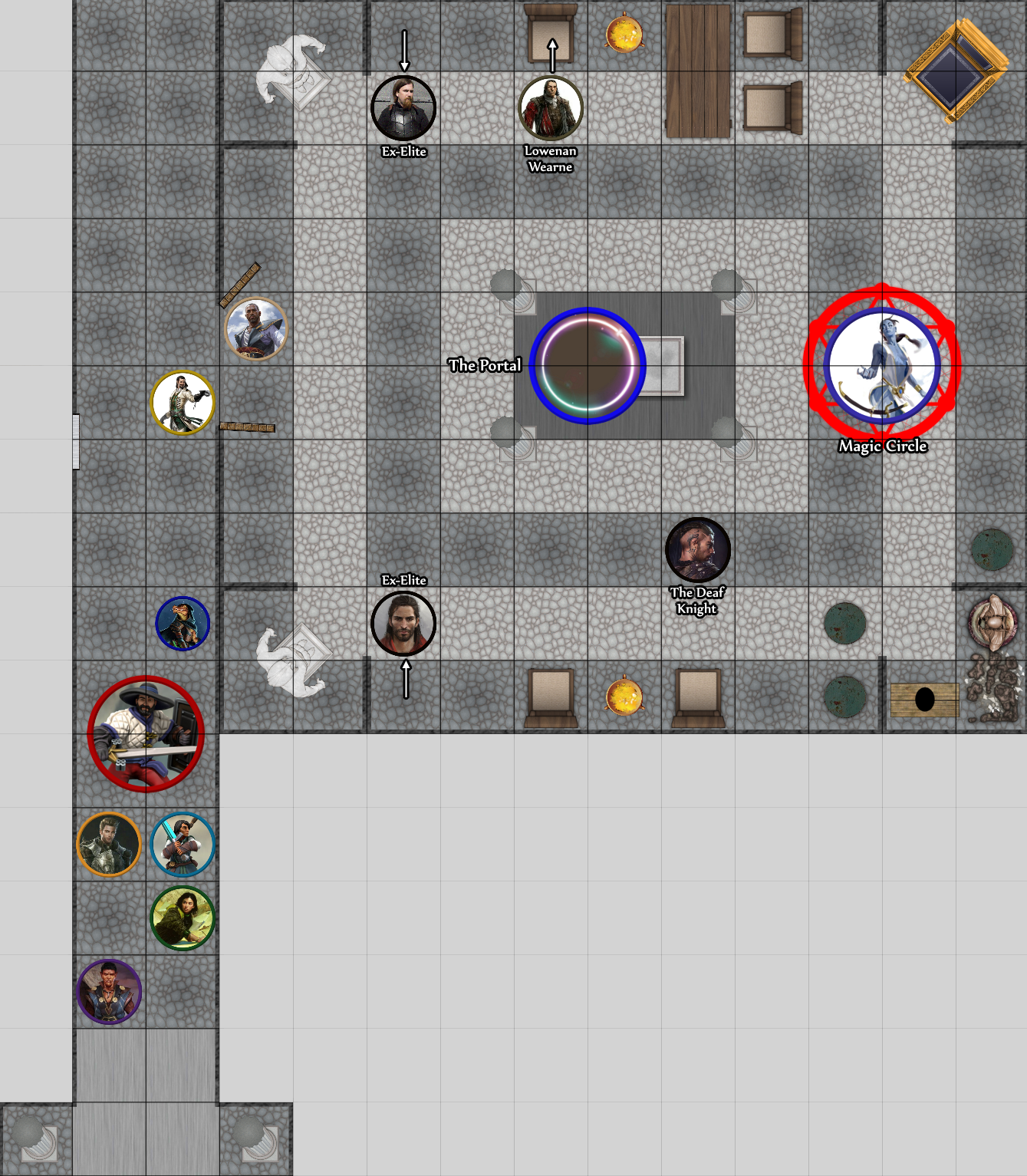 Still paranoid about hearing me, eh?

I thought it would be a nice challenge for you.

Also, should I roll again to recognize the circle?


I was hoping to get what is in the circle and maybe if the room dimensions have something with the ritual...
Bad rolls, but maybe I know something about the script (arcana)?

Also, should I roll again to recognize the circle?
Click to expand...

For the first roll, Akos is fairly certain the female outsider in the circle is a genie. He doesn't have a clue what type of genie she is, however, or how powerful she might be.

For the second roll, Akos can tell that the circle is probably a magic circle spell that has likely been made permanent. The circle is etched into the stone floor and seems to be part of the room's overall design. If you want him to know the exact spell trapping her, you need to make a Spellcraft check. The DC is 20 + the spell level.

Energy from the circle seems to be directly connected to the portal. The circle might be powering the portal, or vice versa. It's hard to tell unless Akos gets a lot closer.

Regardless, the room is oozing with magical scripts and symbols that range from Dwarven to Orc and Elvish to Infernal, as well as ancient languages that likely haven't been spoken in centuries. It would take a long time for Akos to decipher it all. He can understand why Phelix would want to control this place. Any other loremaster would be very jealous of where Akos is standing.

More than likely the room was originally a temple or an arcane laboratory, or maybe both. It's hard to tell.

Your third roll tells Akos that the room is old and forgotten. Perhaps it goes back to the time of the Ancients who built the Palace before Bluffside was even a dream. Or it could be part of an ancient dwarven stronghold that fell from grace. He doesn't really know any more than that. The place is old, very old.

It's weird to think it went undiscovered by the Wizards Guild. Perhaps they know it exists and didn't tell anyone. Or maybe it was hidden by some powerful force until Phelix found it.