Here’s hoping you're ready for a jolly entry in Mythological Figures—and that you brought your own drinking flask. It’s that big witty lumbering drunkard and expelled member of the church: Friar Tuck! 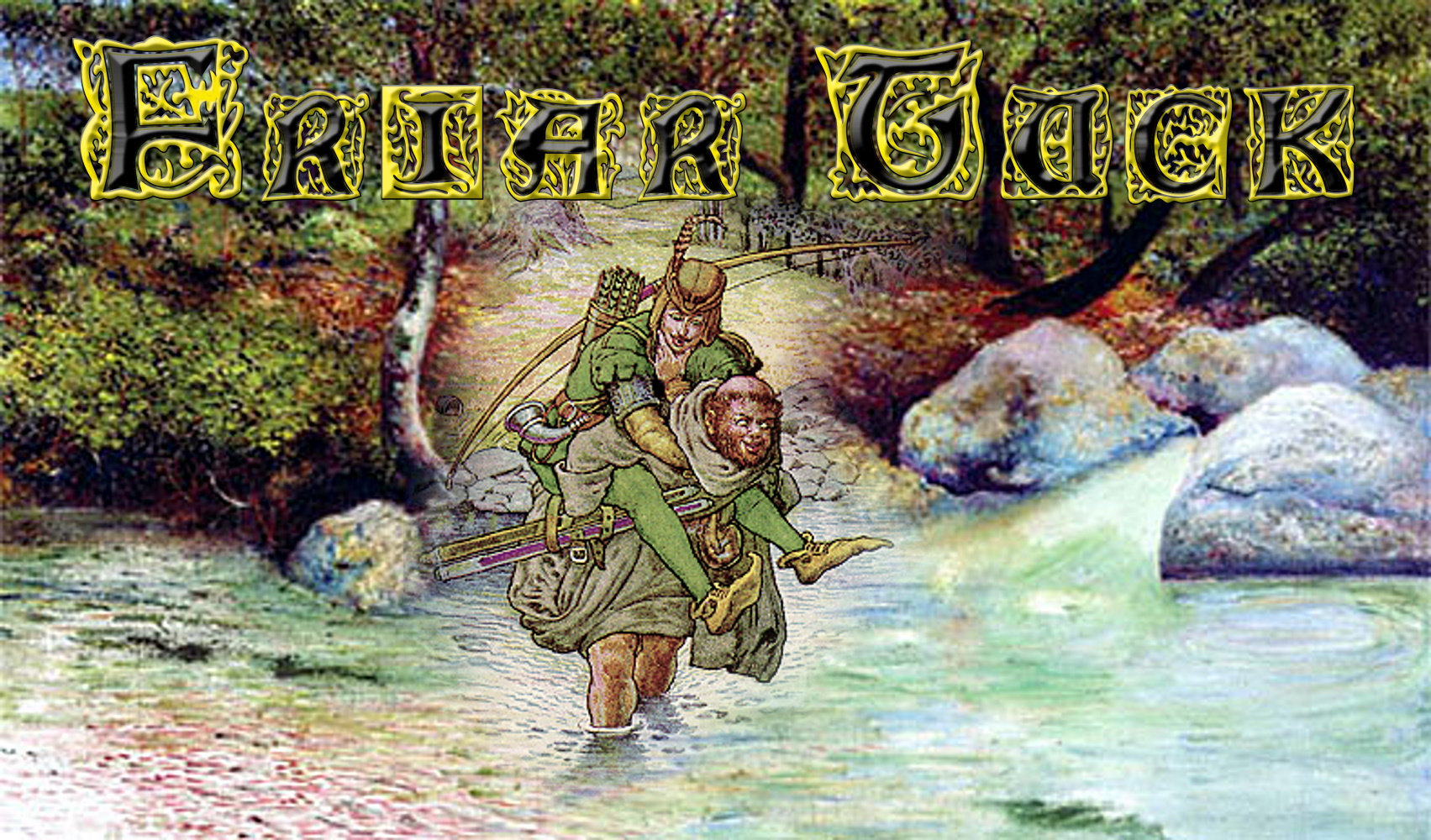 While the statistics for this article are definitely for the version of Friar Tuck most of us are familiar with, he’s not actually always been a big jovial drunkard—sometimes he’s a temperamental, strongman archer and swordsman. Most of the time though we’re looking at a portly fellow with a love for food and drink, and typically his introduction to Robin Hood is part of a battle of wits (which he loses, having to carry the legendary highwayman on his back across a river and dropping Robin Hood along the way). Notably, Friar Tuck was an important part of the May Games festivals between the 1400s and 1600s in England and Scotland, often featured in plays like Robin Hood and the Curtal Friar. Curiously during the reign of Richard the Lion-Hearted, which has become associated with Robin Hood, there were few if any friars in England so either the stories started later or Friar Tuck was added in later. In any case, Friar Tuck was once a monk in the Fountains Abbey or St. Mary’s Abbey in York until he was exiled for failing to respect his betters, leading him to join the Merry Men as their chaplain.

Design Notes: It doesn’t seem like Friar Tuck ever actually does anything downright holy, and that he’s mostly about getting drunk and defying authority. Obviously this man is a fighter and a rogue (and a thief, what with the need for sneakily getting at that ale). Let’s do the numbers! The DMG came in at 4.0, the Blog of Holding much higher up at 7.4, and that averages to a comfortable CR 5.

Medium humanoid (human), chaotic good rogue (thief) 5/ fighter (brute) 4
Armor Class 14 (padded)
Hit Points 62 (5d8+4d10+18)
Speed 30 ft.
Saving Throws Dex +7, Int +5
Skills Athletics +7, Insight +5, Perception +5, Persuasion +9, Religion +9, Stealth +7
Senses passive Perception 15
Languages Common, Thieves’ Cant
Challenge 5 (1,800 XP)
Background: Acolyte. As an acolyte, Friar Tuck commands the respect of those who share his faith, and he can perform the religious ceremonies of his deity. Friar Tuck and his adventuring companions can expect to receive free healing and care at a temple, shrine, or other established presence of his faith, though he must provide any material components needed for spells. Those who share Friar Tuck’s religion will support him (but only him) at a modest lifestyle.

Action Surge (1/Short Rest). Once on his turn, Friar Tuck can take an additional action on top of his regular action and a possible bonus action.

Cunning Action (1/Turn). Friar Tuck can use a bonus action to take the Dash, Disengage, Hide, Use Object action, to make a Dexterity (Sleight of Hand) check, or to use thieves’ tools to disarm a trap or open a lock.

Second-Story Work. Climbing does not cost Friar Tuck extra movement. When he makes a running jump, the distance he covers increases by 3 feet.

Second Wind (1/Short Rest). On his turn, Friar Tuck can use a bonus action to regain 1d10+4 hit points.


REACTIONS
Uncanny Dodge. When an attacker that Friar Tuck can see hits him with an attack, he can use his reaction to halve the attack’s damage against him.
Last edited: Jul 26, 2021
Click to expand...

It's a very good write-up. It really shows that most clerics or religious people have no ability to perform miracles. A cleric who can heal people at will would be considered a saint, a prophet and/or a messiah.

Yeah. Disagree with a lot of that. He ain't climbing anywhere

So, I was sorry of joking (and sort of not), but it does look like there is some dysfunction here.

If I'm reading right, none of Tuck's attacks would get sneak attack, since they are not finesse or ranged.

Gammadoodler said:
So, I was sorry of joking (and sort of not), but it does look like there is some dysfunction here.

If I'm reading right, none of Tuck's attacks would get sneak attack, since they are not finesse or ranged.

Ooooh right you are. We'll toss a dagger in there.

John R Davis said:
Yeah. Disagree with a lot of that. He ain't climbing anywhere
Click to expand...

Yeah, this was the most glaring thing for me (even more than him not being a cleric or monk) - surely something else could be substituted for Second-story work

Yeah, I’ve always seen him as a monk. In fact, he’s the example I go to when I’m envisioning a Pseudo-European/British-style D&D monk. (Or mystic, in BECM D&D.)

Drunken Master is pretty perfect too.

Seems very much like the monk in the Palladium rpg

Wasn't he the medic too? Maybe training in Medicine? Also, Tuck could read Latin, maybe add in another language?

It's possible to replicate minimal holiness with the Magical Adept feat. Guidance, Resistance, and Bless can all be fluffed as Tuck reading a sermon, or a quick bless you my son.

Pauln6 said:
It's possible to replicate minimal holiness with the Magical Adept feat. Guidance, Resistance, and Bless can all be fluffed as Tuck reading a sermon, or a quick bless you my son.
Click to expand...


Yes, you could give it to him twice, with the second one being for the Bard class, with Vicious Mockery (a stinging rebuke), Blade Ward (divine protection), and Heroism (divine courage).