Your character can be a member of one of the new D&D races: fairy, hobgoblin of the Feywild, owlfolk, or rabbitfolk. Which will you choose?

Folk of the Feywild | Dungeons & Dragons 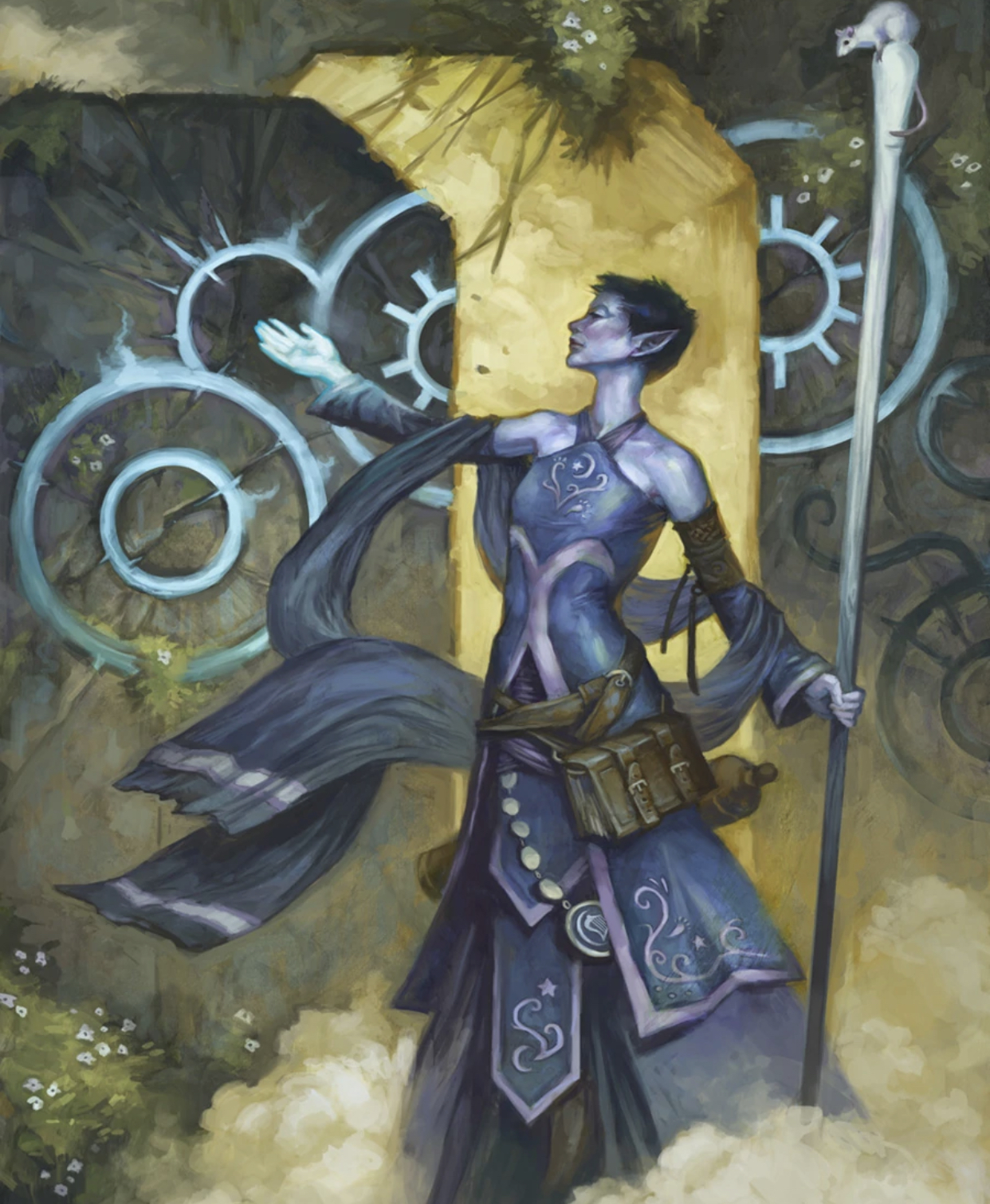 Whizbang Dustyboots said:
I was hoping for Eldraine, but I will definitely take Strixhaven.
Click to expand...

When it comes to another MtG crossover settings book, this is my exact same thought as well. I'll take either or! Even both if it meant that one becomes a book and another just ends up being a revived 2021 Planeshift series of articles.

Weiley31 said:
When it comes to another MtG crossover settings book, this is my exact same thought as well. I'll take either or! Even both if it meant that one becomes a book and another just ends up being a revived 2021 Planeshift series of articles.
Click to expand...

Planeshift doesn't seem to be something they are doing moving forwards?

Parmandur said:
Here's a picture including a Owl-type Aven Wizard from Strixhaven:

I would love for Magic Books to become a ranged weapon option ala Crossbows/Guns!

Parmandur said:
Planeshift doesn't seem to be something they are doing moving forwards?
Click to expand...

I never said I was smart when it came to hoping for things.

Where my redcap race tho

Whizbang Dustyboots said:
It'd be a lot easier to just give them a non-magical version of the Jump spell.
Click to expand...


The jumping rules are a bit of a mess at the best of times, and the Jump spells only really makes them worse. I think the intent here is to effectively add an unpredictable amount of speed to rabbitfolk PCs, with the additional flavour of that speed being jumping distance - while engaging as little as possible with the messy jumping rules. But the d12 just introduces more messiness, in my opinion. Not sure what a neat alternative is though - extra distance of d2 x 5ft or d3 x 5ft seems obvious, but 5e doesn't like anything smaller than d4s very much, and d4 x 5ft makes this the fastest PC race i can immediately think of, and not by a small margin.

Honestly I think the "Hobgoblin" in this should be renamed/reflavored as Boggart.

I think that I still prefer Walrock Homebrews's Faeries to the Fairy in this article.

Weiley31 said:
Honestly I think the "Hobgoblin" in this should be renamed/reflavored as Boggart.
Click to expand...

The weirdness around the naming there is one of the biggest red flags that they are dancing around what they are really doing here.

SirMoogle said:
Where my redcap race tho
Click to expand...

Honestly that should be in there in place of the "Hognoblin."

I'm going to take a moment to say, they should really release a book where all of the past races are redone using this new system, if they go forward with it. I know they are fighting tooth and nail to not have to push for a “5.5” or “5esentals” but really the design philosophy of races and classes have changed enough to where they should do something along those lines.

Creature types:
Of note, none of these have multiple types. Did they drop the mechanic? We will see when the Ravenloft book drops I suppose. I liked the idea of that mechanic, but in practice it just piled on weaknesses without any benefits.

Fairy
Clap your hands if you believe.

Fey Characteristics.
The default quirk list is more saccharine and less Fair Folk. But that is the style nowadays.
They are Fey, and nothing else.
They are small and fast.

Fairy Flight is (walking speed) magical flight with a hover and no gear restrictions.
Fairy magic adds one of the best level 1 spells to your spell list and gives you a free cast.
Fey Passage lets you slip through basically any gap.

Thoughts.
Basically, I would consider this one overpowered. The only thing it doesn't have is Darkvision.

Hobgoblin of the Feywild
So, goblins are from the feywild now?

Fey Ancestry.
Just advantage VS charm. They are still humanoids, but are they goblinoids?

Fey Gift.
Bonus action help, at pb/lr. Also it does other stuff too. Temp hp and disadvantage on 1 attack are good at level 1, but scale poorly, an extra 10 speed could be more significant.

Fortune from the Many
Now, this is the real deal. An up to +5 bonus whenever you miss an attack or fail a check or saving throw. Not only does it only work when you would have otherwise failed, +5 is a huge bonus and you can use it pb/lr.

Thoughts.
Not in the same league as the Fairy, but still powerful. The more interesting bit, to me at least, is the new goblin lore.

Pick your size. That's nify.
Darkvision. Better than normal but not superior (presumably because that means they get light sensitivity?)
Magic Sight. Well, not quite, it lets you cast detect magic as a ritual, which could be handy.
Nimble Flight. Like Aarakocra, you have wings and arms. Unlike Aarakocra, your wings aren't puny little things and you can fly around in full plate.
Silent Feathers. The stealth skill for free.

Thoughts.
This seems to be the new direction in flying PCs: Flying is Flying, take to the sky. To be fair, the armor restriction wasn't a real balance concern anyway. The real concern is having a warlock or longbow user snipe people from so far away the target can't retaliate.

Rabbitfolk
Was there much demand for rabbit-people or is this a new anime thing I missed?

Pick your size, again. Now I wonder if this is a new secret standard they are testing.
Hare-Trigger. That pun is bad. But +pb to initiative is a huge boon.
Leporine Senses. Free Perception.
Lucky Footwork. A reaction for a bonus 1d4 when you fail a dex save, not the best feature but could come in handy.
Rabbit Hop. +1d12 distance as a hop when you move 5'. I have to say I don't like this mechanic. It doesn't snap clean to a grid (which all movement should).

Thoughts.
Comes in strong, but peters-out in the end. There has to be a more elegant and integrated solution to letting a rabbit hop around.

BookTenTiger said:
Is there anything you do like about it, or is this going to be the limit of your contribution to the conversation?
Click to expand...

For this thread? Thats about it. No need to rehash the last one.

Leatherhead said:
Once, Owlbears, now Owlfolk. What next, Gelatinous Owlcubes?
Click to expand...

Oh you know its coming!

What Do I Know About First Impressons? Folk of the Feywild

Jared Rascher said:
What Do I Know About First Impressons? Folk of the Feywild

They just so happen to release a UA that includes two races from a setting that's been increasingly popular with nearly identical mechanical traits?

Just read the Fairy one. Wow, that seems VERY powerful. Flight with hover, squeezing through basically any space and a couple of free spells. That's potent as heck.

YosemiteSam said:
They just so happen to release a UA that includes two races from a setting that's been increasingly popular with nearly identical mechanical traits?
Click to expand...

WoW devs were working on Pandaren for years before Kung Fu Panda. But everyone screams about how WoW was just copying a popular movie. Concurrent development does happen. I’ve not even heard of the game you’re claiming they’re copying here.

overgeeked said:
Can’t wait for the first fairy chainlock with a sprite or pseudodragon familiar. Ride that pseudodragon to victory.
Click to expand...

I was considering playing a Mastermind Rogue in my next game. If the DM was to allow me to play a hobgoblins that would be unreal.

I am sure it is not balanced around being able to use the cool new abilities every single turn. The Mastermind would miss out of the ability to use Help as a bonus, since they can do that anyway, but the ability to give 2 people 1d6 THP, 10 move, or 2 enemies disadvantage on attacks every turn is pretty great.

D&D 5E What would you like to see in a Feywild setting/adventure?