Some Stories Are True

Finally, he mentions, "I wonder if there is a way to neutralize the spray BEFORE the animal makes use of it, through the same chemical wayline manipulation that we use to purge it after the fact? I did not like suffering through that."

Hiroshi chuckles at his friend.

Hiroshi says, "That's a conversation for tonight's campfire. In the meantime, we should skin it, clean it, and see if any of the parts are useful for anything. We should also cut up the meat. I wonder if we could use chemical waylines to make the meat taste less gamey?"

This last comment about the gamey taste is more of a rhetorical question. The two friends waste no time setting about the task; they have worked together many times in the village, helping each other with the other's chores, in order to have more free time amongst themselves.

Wrenn says, "You two come help as well, it will make the task go more quickly."

Oorvid laughs at the line of thought concerning the spray. "Hmm. Interesting idea, but since you would have to touch the varmint before you could try it, what do you bet it could spray you first, every time?"

He guffaws too loudly.

"You think that stinky thing is edible?"

Since Wren and Hiroshi have taken to prepping the animal, Oorvid retrieves his thrown axe and gathers some wood for a fire, surprising himself by igniting it just by willing it.

"In theory would it not be possible to proactively neutralize the spray? I am no expert in chemical wayline manipulation, but it stands to reason if you know how to fix it you could again in theory be able to prepare counter to it. I doubt the affect would last long of course so your timing would need to be fairly good." Astrid draws her dagger and sets off to help Wrenn and Hiroshi anyway she can.

MacConnell said:
Oorvid laughs... "Hmm... touch the varmint before you could try it..."
Click to expand...

Different words are used but the four decide upon the same conclusion, especially after employing manipulation to reduce the smell of cleaning the animal. The meat later has all the flavor of water and it is decided that more practice will be needed to determine just how much to bend the waylines to their will. The final thought on the subject renders a hanging question. The toxic spray might be neutralized before it could be employed but the varmint would have to be touched. If one could only determine how to manipulate waylines at a distance. Perhaps with some time... 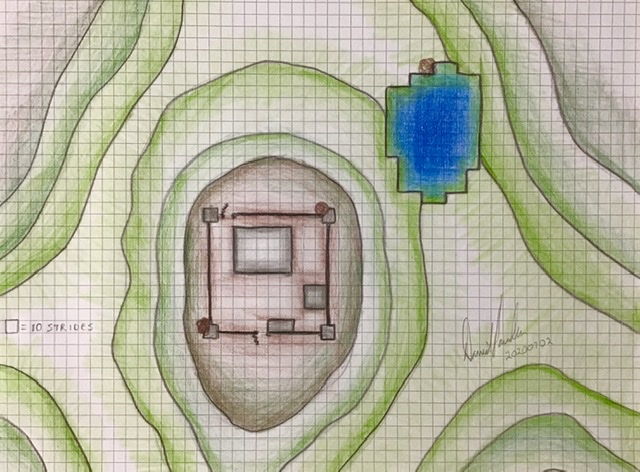 Having taken some near village excursions in their even younger days, the four youths are quite pleased with the current discovery, having never before ventured so far inland from the coast, fresh water and seemingly plentiful game. The day turns into 10 with the four thoroughly exploring the external remains of the ruin.

The two points of egress on the outer wall used to be impeded by iron-wrought gates. Both gates are open and weathered beyond any recovery of the metal. Several other points of egress exist now, with parts of the wall crumbling and two large trees having grown at the southwest and northeast corners. The main structure appears to be three levels in height and still seems structurally sound. Two of the four sentry towers, where the trees now stand, are nothing much more than rubble. The other two are intact with stone steps leading upward, directly across from the open entry. Narrow slits in the construction of the walls allow enough light to enter for a person to see to move around but not enough to actually examine anything.

Of the other two structures along the outer wall, one appears like it might have been some kind of tenet housing. Its wooden door is still closed, but a corner has been eaten away by forest denizens and the wood does not look like it would give a toddler much resistance. The smaller building looks to have been a smithy. It is open. The main building has two entry points, one in the front and one in the back. The one in the back was barricaded by an iron portcullis, similar in manufacture to the outer gates, with the metal in similar deterioration. The front could have been barricaded by a wooden draw gate, but the gate is opened, flat. It is too dark to comfortably move about the main building.

During the 10-day of camping, some discussion and experimentation ensues in which it is learned that a stone or the stone tip of Wrenn's arrows can be caused to give light, or a glow can be produced in thin air. The light, only about the brightness of a single candle, lasts for about 10 minutes no mater who illuminates it. The floating illumination requires concentration but the illuminated stone does not.

Early in the morning, Oorvid returns from washing his face in the pool and says, "Well, what say you we actually search through one of those outer buildings?"

Having been rather content during the tenday (there exist no term like week), Oorvid begins to grow impatient, but not yet to the point of impetuousness. During the silence he makes a suggestion. "How about we begin with the structure next to the southern gate that looks like it may have been a smithy? It is only one level. Next we could move to the one that looks like tenet housing or maybe a barracks. It is two levels."

Wrenn and Hiroshi both seem to like that idea.

Hiroshi nods, "And I agree that the barracks is a good choice for second to explore."

"Very well, Oorvid if you would do the honors of taking point, we shall follow your lead." Astrid draws her sling and follows in the middle of the pack to best utilize her slings range.

Oorvid agrees to take lead. With Astrid and Wren being in the middle, Hiroshi takes the follow position. Oorvid picks up a random stone. When everyone has entered the smithy, he bends electromagnetic waylines to cause the stone to glow. The light does not flicker like a candle or torch. It is steady. He holds the stone over his head, in his left hand, and grips a carving axe in his right.

Tiny, insignificant denizens of the forest have made residences in the building, little lizards, bugs, and orb weavers. No threat is perceived. The smithy appears to have been abandoned, not gleaned. There are barrels that probably once held water, a kettle forge, an open fire pit, and various sacks and debris. It appears that nothing has disturbed the smithy for some time.