Strixhaven's table of contents has appeared on Reddit. The book contains 7 chapters, plus an appendix, including four adventures. 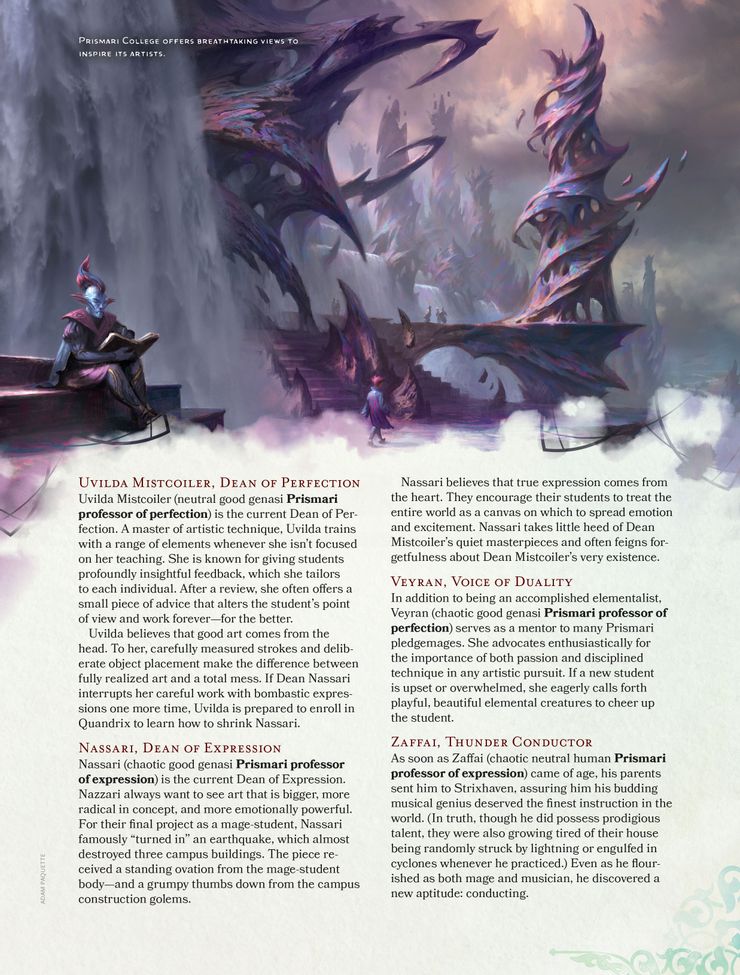 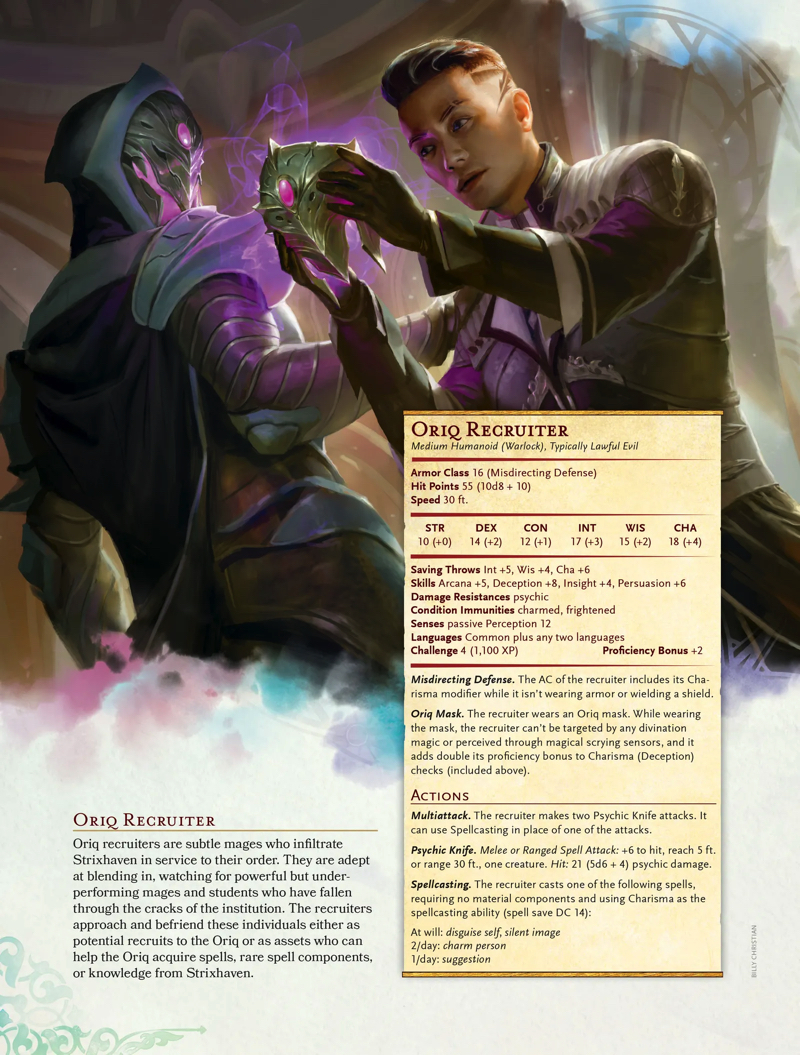 It's IGN's turn to preview part of Strixhaven: Curriculum of Chaos, taking a look at exams, extracurricular guilds, and jobs. An example of an exam includes the Magical Physiologies exam, and a success gives them an advantage when fighting those creatures. The exams have a studying and a... 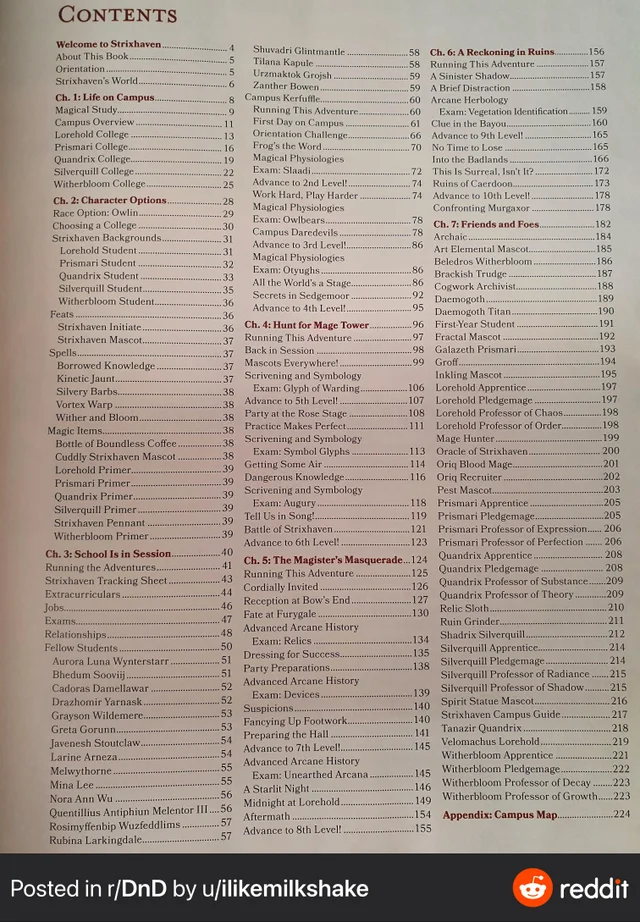 It is, to me, all of an obvious statement, an unconvincing argument against it, and a gross hilarious overstatement.

There is an element of homagé, but it's not overwhelming or 1-to-1.

Parmandur said:
There is an element of homagé, but it's not overwhelming or 1-to-1.
Click to expand...

No Hogwarts students ever worked at a US-style diner: Free D&D Adventure: Work at Strixhaven's Firejolt Café in 'No Tears Over Spilled Coffee!'

Great - I hope you all enjoy it. Don't let my non-enthusiasm take away yours. It just seems like a very "YA" concept for a D&D setting and I'm just not into it. And you are right - magical school settings with various houses/organizations are nothing at all like Hogwarts...
Honestly though, the main thing that turned me away from it was the fact that there seems to be very little I can extract and use in my own campaign as a DM. Other than the addition of the Owlin race, I really don't see anything that I would ever be tempted to use.
I'm also not a fan of the Eberron setting per se, but I bought the book because there are many elements from within the setting that I do like and have incorporated them into my campaign world. Strixhaven just doesn't seem to have that and seems more of an adventure book/path than an actual sourcebook (which is what I hoped for) along the lines of Wildemount or Ravnica.

I feel like no one has said this in the Strixhaven threads, but probably they have, ANY wizard school whatever will always be called hogworts by all of us not super schooled in the larger variety of wizard schools.

Even if your wizard school adventure predates Harry Potter it doesn’t matter, it’s Hogwarts for DnD. It is, you can’t do anything about it.

All wizard schools will forever be more or less Hogwarts forever, there is nothing you can do about it.

Zarithar said:
It just seems like a very "YA" concept for a D&D setting
Click to expand...

The primary audience for D&D has always been YA. Grousing about it now is getting dangerously close to gatekeeping. How many of us where not YA when we started playing D&D? I know I was 12.

Supporter
It occurs to me that a magical university background could be good information for a Candlekeep campaign also.

Paul Farquhar said:
The primary audience for D&D has always been YA. Grousing about it now is getting dangerously close to gatekeeping. How many of us where not YA when we started playing D&D? I know I was 12.
Click to expand...

That's actually a pretty solid point: a huge percentage of layers are actively in middle school, high school or College.

I LOvE that this edition is stretching its legs

in different ways. I’m going to support that.

Paul Farquhar said:
The primary audience for D&D has always been YA. Grousing about it now is getting dangerously close to gatekeeping. How many of us where not YA when we started playing D&D? I know I was 12.
Click to expand...

I was 10 or 11 and started with Keep on the Borderlands. Please tell me how that is even remotely similar to Strixhaven. Also I'm just saying that I am not interested in the setting. Why is that a problem for you? If you like it - go for it and enjoy yourself. I'm not discouraging anyone else from buying it, but I guess if you don't like the way I personally feel about the setting then that is "gatekeeping" in your mind. I love 5th edition - my favorite edition of the game, and I've played them all. I've also enjoyed 90% of the content released for it. I can't say the same for any other iteration of the game... including AD&D, 2nd edition, etc.

Zarithar said:
I was 10 or 11 and started with Keep on the Borderlands. Please tell me how that is even remotely similar to Strixhaven.
Click to expand...

Back then TSR hadn't realised who their core market was. But Dragonlance a couple of years later was clearly YA - it practically invented the genre!

Zarithar said:
Also I'm just saying that I am not interested in the setting. Why is that a problem for you?
Click to expand...

Not being interested in it is fine. Having to go on constantly about just how not interested you are is the problem. I'm probably not going to use it either, because I'm not YA any more, and neither are my players. But remarkably enough, I don't think the universe revolves about what I want, and I am really excited to see WotC trying something new and different, and I really want to see this bold experiment succeed.

The great thing about Strixhaven is that it takes part in the zeitgeist of creative media that is accessing that fantasy school drama genre without being beholden to and giving money to Mrs Rowling. This is Hasbro's IP, but it scratches an itch that people have wanted, but felt complicated about ever since we found out how much of a TERF the writer was.

Another example of this idea being in the cultural zeitgeist is 2019's "Fire Emblem: Three Houses" which is essentially a video game HP but miniatures-grid battle wargaming school instead of wizard school.

Monday at 8:07 AM
Paul Farquhar