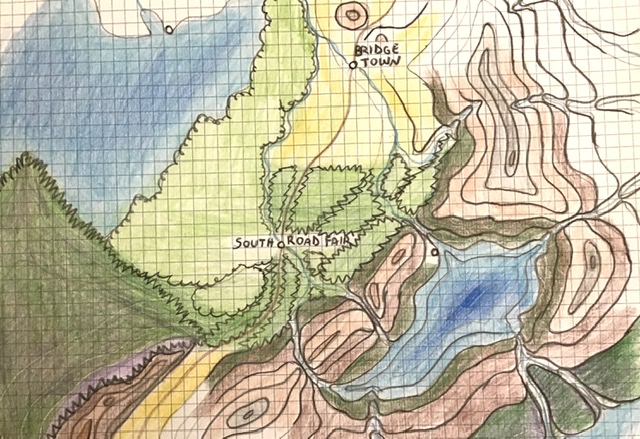 South Road Fair is build upon a rivulet in the middle of the the strip of piney woods that run mostly east to west across the Southern Trade Road. It is an open array town with no wall, though it does employ roving guards, some of whom have been trained by the former South Road Seekers, a retired adventuring group. The forest is about 3 or 4 day travel, by foot, in width, north to south. Town buildings are marked by placards designating their function, because knowledge of reading and writing is scarce. The common language is Ansylin, though many residents, especially newer immigrants, speak Centrin. A small clan of Rheini and another of Spiofthests have, also, recently established residence within town, both lending skills to community development, and both recruited by the South Road Seekers. There exists no prejudice to the function of the community and all peoples are welcome to trade.

Growing up in South Road Fair is, in itself, a pretty good life. The river is cool and clear, containing many fish. The forests is serene and full of wildlife, though not all wildlife is simple game, some denizens are quite dangerous. Though trade had been interrupted between Asylim to the south and Boga City to the north, for about a year, everything seems to be back to normal, and new trade was established with the discovered Maldrog community of Bergbaulager, to the east.

With the departure of the only two active members of the Seekers, it falls to someone new to take up the mantle of solving mysteries and eliminating threats. The itch of mystery always tickles a few young adults, when reaching that age of desired independence.

One evening, at the Boar's Head Tavern where all information transpires, Giodavi, the Mayor, expresses a minor concern and asks for volunteers to look into it.

"It is an odd thing, but the level of the river seems to be rising. This is not some seasonal fluctuation. The increase has been steady enough to be noticeable. My bet is that something downstream is blocking the flow. My guess is that the obstruction is some distance due to the slowness of the rise."
Last edited: May 20, 2020

Having spent the last couple of years with the roving guards, Marqus stands to his feet. He holds his chin with the confidence of youth, sets his mug on the table, and with a grand gesture, announces. "I will look into this dilemma for you, Mayor. I do not fear to travel beyond the watchful eye of our rovers. Who will join me?"

Marqus is a tall, muscular, young man of Ansylin parentage, with an oddity of hazel colored eyes. He was born and raised right in South Road Fair. His personality is a little boisterous, like most Ansylins, but he demonstrates a kindness in his actions and a concern for the well-being of others. 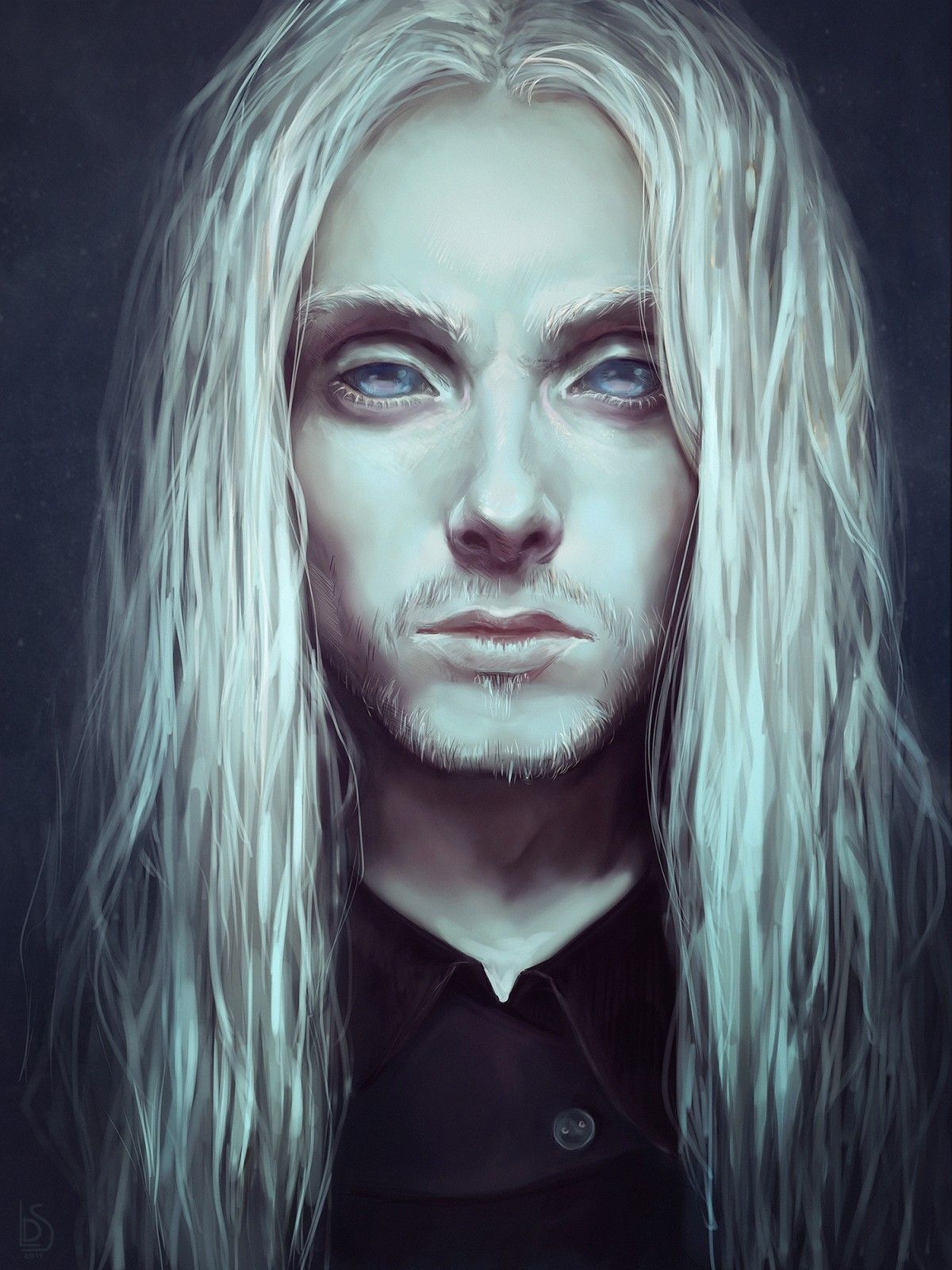 In the corner of the tavern, two youths are sharing a table, each with a mug of pine vine, laughing and joking in a carefree manner. When Giodavi makes his declaration, and Marqus speaks up, one of the youths, an albino with long, white, unkempt hair, stands up and says:

Wrenn Morningsong: "I'll go. This sounds like a worthwhile endeavor. And my buddy here wants to come too, don't you Hiroshi?"

Wrenn nudges the other youth who was sitting with him. 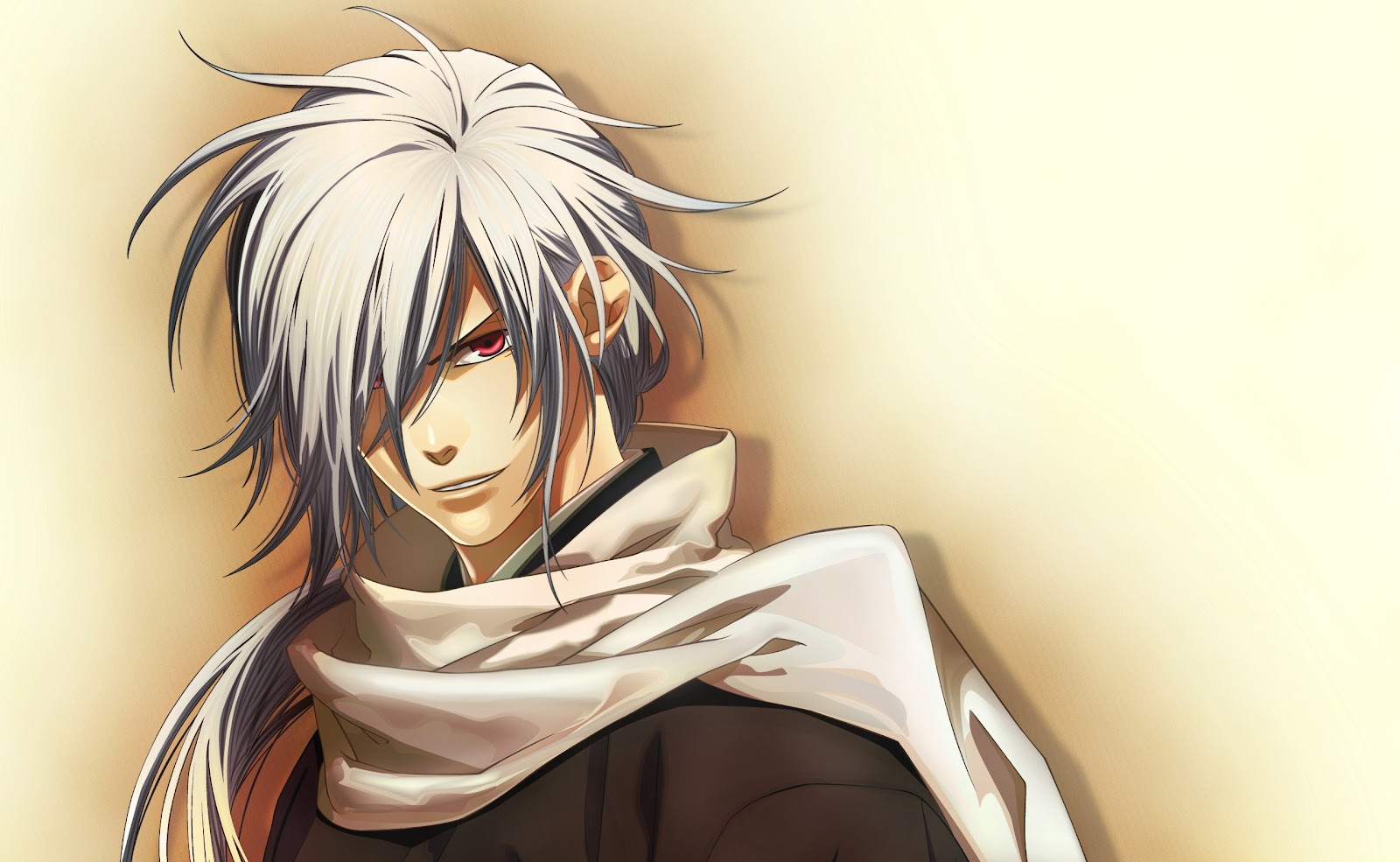 Taken by surprise by his friends comment Hiroshi doesn't know what to say at first. But after a moments thought he decided that it sounds exciting and that he wants to go. 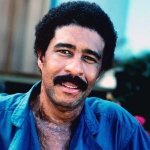 Giodavi claps his hands together in gesture to indicate his pleasure at the responses. "I do not know what sort of offer to make for such an endeavor, but feel free to provision from the trading post. Lyndha will see to your needs."

Marqus is known to the other two young men but perhaps not so formally. He is known about town by many of the folks, not only because he is part of the rovers but also because he is friendly and tends to speak to everyone encountered.

"Hi. I am Marqus. Good to have you along. We should head out first thing in the morning. Get a fresh start and the day's light. We are following the river so one waterskin each should be enough. I'll get some rope, a carving knife, and a little dry rations. If one of you can shoot or throw, we can probably get game or spear fish."

Marqus is waiting outside the Boar's Head by first light, having provisioned the day before. He is carrying a pair of carving axes that were, obviously, not with him in the tavern. Carving axes are basically short-handled, broad bladed, tomahawks that are not really designed to cut wood. Marqus nods in a friendly manner and jerks his head in the direction of travel. By midday, the journey has been uneventful, and the group stops for lunch.

Marqus does not travel in a straight line. Time is not imperative. He wanders away from and back toward the river, sometimes wading into the water. It is obvious he is looking around at things. He does not appear to be looking for anything in particular, just looking.

Wrenn stops by his family's dwelling before setting out. He asks his father if he can borrow his bow, some arrows, his skinning knife, and a waterskin. He tells him about the task that Giodavi has set for the three boys.

Wrenn says, "We'll be back soon. We just need to figure out what's blocking the river. My money is on varmints. On the way back, I will try and bag a few hares so Mom can make a stew. Hiroshi and Marqus are coming with me."

Wrenn will also grab a small bag of dried rations from the trading post, just in case the hunting proves to be slim.

While traveling, Wrenn will look for medicinal herbs, plants, and roots along the path. He will also keep an eye out for any interesting-looking stones to add to his rock collection. And of course, he will keep an eye out for game, especially hares, turkey, and small deer.

Hiroshi says, "Hey Wrenn, check this out. I can balance this dagger on my index finger! I've been practicing that for two weeks and I finally got it! And look, my finger's all scabby from where it poked me!"

Along the way, Hiroshi "entertains" (i.e., annoys) his companions by doing tricks with his dagger. Finally, Wrenn cuffs him playfully on the back of the head, and tells him to stop the nonsense and help him forage.
Last edited: Apr 8, 2020

Wrenn suggests, "Why don't you give Marqus one of your javelins to fish with?"

During the break, Marqus bluntly states, "Well, we are away from town. I can make fire. I get the feeling that you can, too. We should keep this among us."

With that, he gathers some kindling, holds some in his hand until the other end ignites, spontaneously, then makes a fire to cook.

During the random searches, some edible herbs are discovered but nothing of more note. While dabbling in the river, each man finds a piece of slate and a piece of flint. All of which seem important for some reason, but no one knows why they wish to hold onto them.

ecology + analysis + d100 => 80
all failed
After lunch, when continuing on, Marqus calls to the others. "Look at this beetle tearing into that dead log. You ever see one that big?"

The beetle is a reddish brown color and about the size of a man's head. It appears to be eating the rotting log. It is known to each man that a couple of years back Maeli, the town herbalist, discovered that boiling the wing coverings of insects would produce a substance that could be added to leather to make it more protective and durable. It occurs to each that rather than some fist-sized bug, a beetle of this size should be more useful. After all, how dangerous could a beetle be?

Reaction: 83
Heat: 78
Wrenn will try to get close enough to the beetle to lay a hand on it. He knows that his arrows would probably bounce right off the carapace, but he wonders if he could heat the creature, and boil its insides...?

reaction = 59
javelin = 74
Hiroshi walks up to the beetle ,proceeds to take aim and stab the beetle in exact middle of the carapace

Feeling embolden by the forward movements of his new friends, Marqus brandishes his carving axes and moves in, as well.

Wrenn pauses, and then begins to concentrate; he will attempt to manipulate waylines in order to clear his mind. He nods knowingly at both Hiroshi and Marqus, because both of them have the talent as well, and he knows they will follow suit. It is unspoken, as Marqus suggested. The fewer words that were spoken about it, the better.

Hiroshi still dazed realizes that Wrenn is hinting that he needs to manipulate waylines to clear his mind of the toxins.

Once everyone has had the chance to clear their heads, Wrenn suggests that they continue on, in the interests of not wasting any more daylight.

Wrenn comments, "The bug was an interesting diversion, but we still have a job to do. Let's get moving."

Tellerian Hawke said:
Once everyone has had the chance to clear their heads, Wrenn suggests that they continue on...
Click to expand...

Rather than manipulating mystical waylines, some instinct in Marqus provokes him to manipulate chemical waylines instead. The end result is the same motivator.

Later, laughing about the misfortune of the insect, the three pass the time in idle chatter and casual search. Game seems to be plentiful, but nothing encountered is very large until the remains of a dead pig is discovered. The pig must have been killed by some predator some days back and abandoned after the predator had eaten its fill. Some scavenger ants seem to have located what remains and are pinching off chunks to be carried somewhere else. Ants can be dangerous. Like the previous beetle, these are rather large insects, being about the size of a person's forearm. The pattern of movement seems to keep three ants in the area at the same time.

Wrenn smiles, "Looks like we have another chance to test ourselves. To my knowledge, ants don't emit any venomous clouds. We just have to watch out for that nasty bite. You guys wanna track them down? What say you?"

HIroshi nods "Sounds like a good idea to me; it'll be a good chance to redeem myself after that embarrassment with the beetle. I'm in!"

Hiroshi gathers himself and his belongings and gets ready to head out.

Marqus swishes his mouth back and forth and rubs his thumbs to his forefingers. "I agree about the cloud, but it is not the bite that is dangerous. It is the stinger at the back end. It contains a venom. Some of the other rovers have encountered them."

"I do not think we should follow them to their nest. There would be too many in number, at once. They seem to be spaced out enough, we could hit a few of them on the corpse, then back away."

Marqus said:
"...we could hit a few of them on the corpse, then back away."
Click to expand...

Wrenn nods, and notices that Hiroshi is nodding as well; "My thoughts exactly. Let's do that."