​
The Southroad Seekers rose from the humble origins of members of the Ansylin Silk Caravan to be the protectors of the community of Southroad Fair. Having assured its independence from Asylim and bolstered its trade with several newly discovered communities, some of the Seekers had decided to retire from the unpredictable and often dangerous profession of explorers. A few chose to continue in their dedication to making new discoveries and exploring the expanse of The Untamed Wilds.

Sheldon was born in Boga City, the trade hub of the continent, to parents who joined the Ansylin Silk Caravan as collectors when he was a small child. Being outgoing and easy to get along with, he quickly made friends with other children of his age group. A friendship that knitted into a tight bond as the children grew to adults. As an adult, he too worked as a collector like his parents but showed a real talent for cooking and spent more time cleaning and preparing game than gathering spiderwebs. Noticing, even at an early age, that he could sense things that others could not, energies in the weather, the land, the plant and animals, and other people almost like strings tying everything together, led him to test his ability to tug those strings when no one else was around. 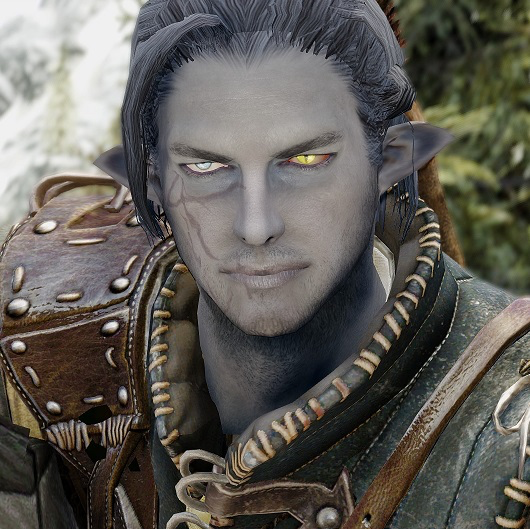 Merindell Silveroak is a Faethrin, of the Amiradthan tribe, having gray skin, standing 6'2" as a fully-grown adult; his oval-shaped eyes are a light shade of green, which give him a calm, curious gaze that is almost hypnotic. His hair is a blend of dark blues and reddish browns, giving it a color akin to that of a raven's wing; he does not cut it, nor does he braid it, although he does keep it pulled back with a single, simple clip made of oak. Although he is tall, he is slight of build, having lean, spindly limbs, and a narrow upper body. Merin possesses a natural talent with manipulating way, though he as thus far kept this hidden as to not cause a panic or "witch hunt" with the common folk. Merin was adopted by the caravan about 10 years ago, suffering from a bad concussion; he was found among his dead kinsmen, their bodies scattered by the roadside, and stripped of their clothes and gear. His injury suggests that he was rendered unconscious and left for dead, although Merin has no memory of being struck; he remembers only the shouting of his kinsmen, "Evipau! Evipau! Look to the trees!" and then, nothing. The Caravan Master has suggested that Merin fell victim to a sling bullet, which is an uncommon weapon for an Evipau, but one which could easily explain such a sudden head injury. Merin carries a simple, wooden staff, which is plain, and un-adorned. The staff is made of Heart Oak, and is exactly even in height with Merin himself. It is his walking stick, but in times of need, it can double as an effective melee weapon. He also carries a Pine Wood recurve bow, which he rarely uses, except for hunting. Merin is quiet, and cautious, and continually scolding Tor for his brash, reckless demeanor. He is fond of telling Tor that, "Fools speak when wise men listen, and rush in, where angels fear to tread."
Gender: Male (+1 to Strength, Confluence, & Will)
Height: Average (6'2") (+1 to Motility)
Build: Thin (+1 to Motility)
Race: Faethrin (+1 to Commercial, & Combat)
Skin: Light Chromatic (+2 to Adhesion)
Tribe: Amiradtha (+1 Combat)
Eyes: Oval (+1 to Will)
Eye Color: Light-colored (Light Green) (+1 to Knowledge)
Hair Color: Raven Black
Hair Style: Straight, Long, Loosely Bound
Ears: Lobeless
Nose: Narrow
Birthplace: Nomadic (+1 to Combat)
Age at start of Caravan Campaign: 18
Age at start of Western Jungle Campaign: 19
Date of Character Creation: Concept: Sep. 21, 2016; Posted on Sep. 29, 2016.
Combat: 10

Gender: Male, Height: Average, Build: Stocky, Skin Color: Dark, Skin Hue: Chromatic, Eye Shape: Round, Eye Color: Medium, Race: Mhytre, Tribe: Deviard
Matumbo’s parents, Kalajumbo and Matilda, were among the elders of the Deviard tribe in the hidden valley jungle. A strong warrior, Kalajumbo had protected the tribe for years from the treacherous Da’Roneh, and was respected by many. Often in their walks through the jungle Matumbo and his father would speculate on what lay beyond the valley, what the rest of the world was like. Tribal lore held that everything outside the valley was ruled by monsters that devoured the rest of humanity. One day a group of outsiders entered the valley and exposed the legends as lies. Kalajumbo refused to attack them, saying that the tribe should make them allies, and Matilda declared that the tribe should pay tribute to these powerful warriors and then speak with them to learn of their ways. In the end the tribe gave away some piles of metal and the strangers departed. After the strangers left the valley Kalajumbo and Matilda were attacked in their home by members of the tribe that thought they had betrayed their beliefs. Matumbo was too late to save his parents and was barely able to flee with his life. He left the jungle valley behind and stepped out into the real world for the first time.
3 - earned 02/04/20, 3 pt spent to raise Fortitude, Psyche, and Might from 1 to 2, 0 pt saved
Last edited: Feb 9, 2020