What are you Reading? August August 2019 edition

Perhaps it should be Advanced August, since it's still July. But I'm off to Gen Con and figured I might as well start the next thread now.

I finished up St. Clair's Sign of the Labrys. It was good, and an interesting choice for Appendix N. It's closest to Hiero's Journey, mixing sci-fi and magic in a post-apocalyptic world.

Next up is Truthwitch by Susan Dennard.

I started another Jeffery Deaver thriller last night, The Bodies Left Behind. This one is a standalone, about a female sheriff's deputy on the run in the woods with a witness to a killing, while the two hired thugs who killed the young couple the woman was staying with tries to track them down and kill them. I'm already over a hundred pages in - it's no easier to put down than the entries in his Lincoln Rhyme series.

Truthwitch is finished. It was really, really good. Exciting and ending in an unexpected way.

Now it's back to Gardner Fox's Kothar, with "Kothar and the Magic Sword." It may be dumb thud and blunder (I've also heard the term "Clonan" used), yet here I stand again...

So I was gone on a cruise, got a lot of reading done.

Read the second of the Murderbot Diaries stories by Martha Wells, Artificial Condition. Enjoyed it though there were no great twists - it feels like it was a story with the ultimate goal being creating characters to show up in later books. Shorter than I like, but fit what was needed.

Talking of a bit short, I read a number of short stories in Cat Rambo's collection Near. Short stories aren't my preferred form, but I was digging these. Reminded me a bit of Jay Lake, in setting up a bigger world that makes you want to read more in it, but dealing with a more contained personal problem. (That's a compliment.) This was my only physical book with me. I had expected the cruise ship to have a library, like the last one did. It did not. (I've been on very few cruises in my life, this wasn't me being the "seasoned traveler", but rather that it was a number of years since the last time and on the same cruise lines, so I expected that innovation would be present. Smaller ship - it was not.)

I read Clean Sweep by husband&wife psydonym pair Ilona Andrews. First of her Innkeeper series. I did enjoy it, even if it had "werewolves" and "vampires" (two things I don't enjoy in my urban fantasy). For all that, fresh. Made me think of Roman Genius Loci.

At that point, sans the library, I was short on books. I didn't have a lot loaded on my kindle that I hadn't read recently, including my other "long series" (Lois McMaster Bujold's Vorkosigan Saga), so I fell back on my guilt pleasure of SF star navel battles with good characters and read the first three and a half of David Weber's Honor Harrington series.

Though really, after a while not only does HH become a Mary Sue, but the entire Star Kingdom of Manticore becomes a Mary Sue, so I'm planning on only reading through about half the series. I a few months back read the last HH book (though not the last Honorverse book), and it left me wanting. So now I'll hold off when I feel it jumping the shark, because we have the capstone instead of the potential of other books.

I finished The Bodies Left Behind, which was good although the ending was somewhat (intentionally?) ambiguous, which was odd for Deaver. Now I'm reading the next Lincoln Rhyme novel in sequence, The Broken Window, in which Rhyme has to clear his cousin's name after he's framed for murder, while tracking down the real killer.

"Ball Lightning" by Cixin Liu, it's good, up to his normal high standards.

Does the Pathfinder 2 core book count?

The Stiehl Assassin that recently came out (terry brooks), and just finishing Goblet of Fire (never got around to reading Harry Potter, so I finally bit the bullet)

Started book 4 of the Custard Protocol.

Just picked up "The Greatwood Portal", third in 'The Heroes of Spira" series by Dorian Hart, who is a member here.

Ryujin said:
Just picked up "The Greatwood Portal", third in 'The Heroes of Spira" series by Dorian Hart, who is a member here.
Click to expand...

Happy to add the series to my too read list.

A lot of D&D research lately, Seanan McGuire, and (because my mind needs a bit of a brain break from all the fantasy) a bit of romance -- currently Stephanie Laurens.

You know, I’ve been thinking about starting a “What Gaming Stuff Are You Reading” thread. Maybe it’s time…

I just finished the second Kothar book. It’s actually better than the first, with more intricately-woven plots (not that that’s saying all that much). It’s dumb, fun, and pretty horrifically dated.

Next up it’s Evan Winter’s The Rage of Dragons. I’m in the mood for something more substantial. At 500+ pages, I think this counts.

The Green Hermit said:
A lot of D&D research lately, Seanan McGuire, and (because my mind needs a bit of a brain break from all the fantasy) a bit of romance -- currently Stephanie Laurens.
Click to expand...

How do you like Seanan McGuire? I've only read Rosemary and Rue, and some of the free Velveteen vs. stories.

Blue said:
How do you like Seanan McGuire? I've only read Rosemary and Rue, and some of the free Velveteen vs. stories.
Click to expand...

I really like her. My only issue is that I can't pick up the next book unless I know I can either stay up all night reading or have the whole day to relax and read. My summer has been even busier than most, so I have been going through the series relatively slowly (at least for me).

I've been on a business trip since Wednesday, so I had a lot of time in the hotel room (and on planes) to read. In that time I have finished up:

The Broken Window by Jeffery Deaver, a Lincoln Rhyme novel where he's trying to find a serial killer who uses online info in his crimes (changing online data to shift the blame for his crimes onto others).

The October List, a standalone novel by Jeffery Deaver, a thriller with the twist that it's written backwards: the novel starts with the last chapter, and then each subsequent chapter takes place just a little before the previous one. It's cool that he managed to still get in plenty of twists using that style, when you already know how the story ends up.

The Strain by Guillermo Del Toro and Chuck Hogan, the first novel in a three-book series about a vampire disease spreading across the globe. It's got a unique, "medical" take on the vampire pathology and really held my interest. As of this morning (on the plane taking me home), I've started up book two in the series, "The Fall." So far it's been very entertaining.

So, my mom came across a box of old books and another box of old dragon magazines from the 80s. I had her recycle the Dragons, but kept the books. It was full of all of the old Choose-Your-Own-Adventure books. I have the original actual CYOA, another brand, and a bunch of the D&D themed ones.

My teenaged girls have been browsing them and we're all having good laughs.

It also had about 10-12 Xanth books by Piers Anthony and I have no idea if I want to keep them or donate them. I doubt I'll read them, and my girls are most likely past that point. I remember liking them as a young teen when they were more about frequent puns wrapped around decent coming-of-age stories, and not the later ones that added a bunch of YA-level titillation.

Finished up The Rage of Dragons. Wow, was that a great book. Absolutely riveting, from start to finish. It’s one of the rare instances where the main character’s mastery of swordsmanship feels earned. Not just because he’s a chosen one, or because the narrative demands it.

Also finished Robert Asprin’s Hit or Myth. It’s been fun revisiting this series from my younger days. Even if the mob stuff was a little too on-the-nose.

Next up is Sterling Lanier’s The Unforsaken Hiero. Because with a cover like this, how could I not? 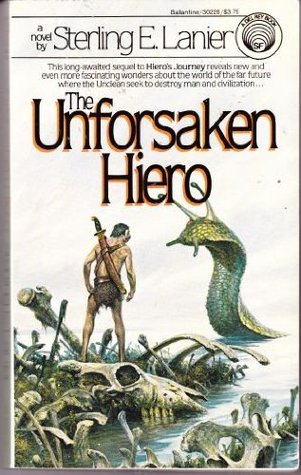 Ralif Redhammer said:
Finished up The Rage of Dragons. Wow, was that a great book. Absolutely riveting, from start to finish. It’s one of the rare instances where the main character’s mastery of swordsmanship feels earned. Not just because he’s a chosen one, or because the narrative demands it.
Click to expand...

The Unforsaken Hiero is the most Gamma World-y novel I've ever read. I remember enjoying it back in high school (which is also when I last played Gamma World on a regular basis).