D&D General What Was Your First Time Playing and/or Running D&D Like?

I was introduced to D&D in my junior year of high school back in 2006 (wish it could have been sooner, TBH). A senior in an art class I was taking had the 3.5 PHB out. I asked to take a look, and a few days later a friend and I were running through a sample combat encounter the senior prepared for our first characters (mine was a half-elf monk). Unfortunately, I didn't really get to play much more until 4E came out, and it wasn't until 5E got popular that I got to play more regularly.

I did become very interested in the game, especially the lore, and ran several 3.5 games in high school as well as a few 4E games in my senior year and college. My very first time DMing was from the 3.5 Basic Set that featured a black dragon on the cover. I ran a few friends through this adventure and have been influenced by it ever since (especially the magic mirror looking for its owner Venzor that the party smashed without investigating; I keep meaning to put it in a future adventure some day). One party member almost died from infectious blue mushrooms, and another died and came back to life as an intelligent dire rat (I didn’t want the player to be bored).

Later I would create a number of more episodic homebrew adventures, the first of which featured orcs in an old fortress with captives. I had drawn art of a piglike orc boss (I had played JRPGs growing up, which often use piglike orc designs) that I had intended to be a recurring antagonist and quickly learned not to count on bad guys surviving for a second appearance!

Those were my formative experiences. I'm curious to hear how others' went.

Early 1980s, like 5th grade, running "Keep on the Borderlands" with my next door neighbor (sometimes in his basement) and younger brother as the players. Very primitive play as you might expect from that age. By 7th grade though, I had an actual group, and also found an older GM to show me how it was done and I started building and playing more sophisticated scenarios. Play somewhat resembles at this point "Stanger Things", only more real. (Fireball doesn't require an attack roll in 1e!)

Supporter
It was second grade - probably 1981 or 82. We had a rain day and we were stuck inside. One of the kids convinced us to play this game that his brother had been playing called "Dungeons and Dragons". We stole the dice out of one of the boardgames the class had (I swear it was Risk but why would there be a game of Risk in a 2nd grade classroom?) and he ran an adventure for us. As far as I can remember it wasn't really D&D in the sense that there's no way we were using the actual rules - he was having us roll things based on vaguely trying to copy what his older brother was doing. But after that I was hooked. We played it every rainy or snowy day after that and sometimes we'd try to sneak dice and paper out onto the playground to play (teachers put a stop to that - for some reason seeing a bunch of kids huddled over dice on the playground made them nervous - probably thought we were gambling or something).

We moved away at the end of the school year, but in the place we moved to I found a friend whose older brother was a huge D&D nerd and was willing to run games for 8-10 year olds when he wasn't too busy or running his "real" game. And at some point my mom bought me a Basic set from Sears or Target and I was set onto the path of becoming a DM myself. But I still remember things from that first "campaign" from 2nd grade sometimes.

Wasn't the first game I played or ran so not 100% sure. I imagine it was ~1983 when I first started playing BECMI likely a module. Must have enjoyed it as this year have played Basic, 1st and 5th.

I have no memory of running my first game.

I played my first game early the summer I turned 12 (so 1983) after bragging and lying for months to my best friend at the time about having played with "people he didn't know." (Some folks lie about girlfriends in Canada, I lied about playing D&D). He called me up one day to say his older brother and some other friends were running a game and I was invited to come play the next day! Freaked that I was going to be caught in a lie when I showed up and didn't know what the heck I was doing I begged my mom to take me to a local toy store where I grabbed the Moldvay Basic set and did my best to absorb the rules. While I was still mostly lost when I arrived to play about 16 hours later, I also realized they were playing what I thought of as "all wrong." I only every played with them that one time or two - my friend's brother and his friends were kind of bullies. I'd eventually start running games in middle school which I began that fall - but like I said, I have no memory of those specifics.

1980, junior year of college. I'd heard about the game and picked up some stuff in the local toy store, but hadn't found a group. Sorta ran into one when I was doing laundry one night, and walked past one of the conference rooms on the floor, and saw some people setting up. I totally lucked out in that they were short a few people, and were looking for more. So I ran and got my books and rolled up some bog standard fighter who got bumped up to 5th level because they were running module A1. That poor fighter got smushed by a mage and some orcs, but I did figure out how the game ran....

I was just a student at a large midwestern university, and I never thought something like this could happen to me. But one week, I was late getting to class, and I had to sit in the back next to the gorgeous graduate teaching assistant. Little did I know when she asked if I was interested in dungeons what would await me!

It was a shitshow.

But it got better.

Player: I was 6 in 1979. I played an elf. My brother ran the game as the DM with me as the only player. I walked into the Caves of Chaos and nearly immediately turned to stone. I cried.

Yet, I was still hooked.

DM: It was the summer of 1980. I'd spent months 'reading' the PHB, DMG and MM in the fashion you could expect of a 6 year old. I used the maps from In Search of the Unknown and played an adventure where the PCs were hired by a King to investigate a ruined castle because a crazy wizard was making monsters in it. It was a trainwreck as you' expect, but we kept at it and some of those players played with me steadily for 15 years (and occasionally to this day).

Late 1E as a freshmen, I rolled up a paladin (DM fudged the Cha requirement for me). I solo explored the 1st level of the Caves of the Unknown outside the Keep on the Borderlands. I went outside the previously explored regions, so the DM rolled on the charts to determine what I found. It was pretty tense, and after I killed a couple of weak monsters and found some treasure, I retreated back. I had no idea about traps, and was lucky I didn't come across any.

Odd. My first GM was another kid about the same age. His step-father ran games for him. He had a lot of Gygax "players dont read the DMG/MM" vibe going on. He had this concept that you leveled as a player yourself, to the point you could actually GM. Though, you could only GM up to the point of level you had yourself. I have no idea how any of that worked and we only did two sessions.

My (technically) first D&D experience was trying to run the Moldvay box basic "Haunted Keep" for my mother and sister in 1982.
It went meh. They didn't get it.

Then, a year later, I tried to play AD&D with a high school club.
It went terribly. They let me watch for two hours, and then they suggested I not come back again because there would "never" be room for me.

At almost 5, I didn't really understand much of the rules. Mostly, my sister and the others would ask me what I wanted my magic-user ("Dartson") to do and tell me which dice to roll. I named him Dartson because he would throw darts after his spell was gone.

I was hooked from the beginning. I asked my parents to buy me books for my birthday a couple months later when I actually turned 5. I read them and re-read them. We learned how to play and made up the stuff we didn't understand.

Grogg of the North

First time playing was in sophomore year of college. We played 3.5 And it's how I met my wife. I played a dwarf paladin with absolutely horrible stats. Our party was charged with protecting an artifact that could banish Asmodeus. We promptly lost it when we tried to hide from an orc patrol, nobody rolled above a 3, and we got our butts handed to us. All in all, fun times. Made some friends and I loved the game.

First time running a game was a semester later. Yea, I'm pretty sure it was a hot mess. I think we knew maybe half the rules in the book. My story was all over the place, dungeons were ripped from whatever video game I had on hand, (Zork!) and XP and Wealth By Level were given a fleeting kiss goodbye early on. But, we had fun. And kept playing through most of college together.

Snarf Zagyg said:
I was just a student at a large midwestern university, and I never thought something like this could happen to me. But one week, I was late getting to class, and I had to sit in the back next to the gorgeous graduate teaching assistant. Little did I know when she asked if I was interested in dungeons what would await me!
Click to expand...

It was back in 4th grade (1980), and I don't really remember it. All I remember until I got my hands on Moldvay was that we entirely winged it, without dice. You literally had to describe what you were doing as the player, and then as DM I described the result. No dice rolling, we had a blast playing for a couple years that way.

I do remember the first time we used the full ruleset and dice - the Haunted Tower from the Basic book, in '86. The party died in the pit trap in the entrance, so we started over and it went a bit better from there.

I was part of a massive party that stormed my cousin's dungeon in 1975. The party had numerous PCs, lots of henchmen, and even some pets. PCs were of various levels. I don't recall what class I was, but I do know I was 1st level. I also was used as cannon fodder with a combat with a vampire and her minions and died horribly. 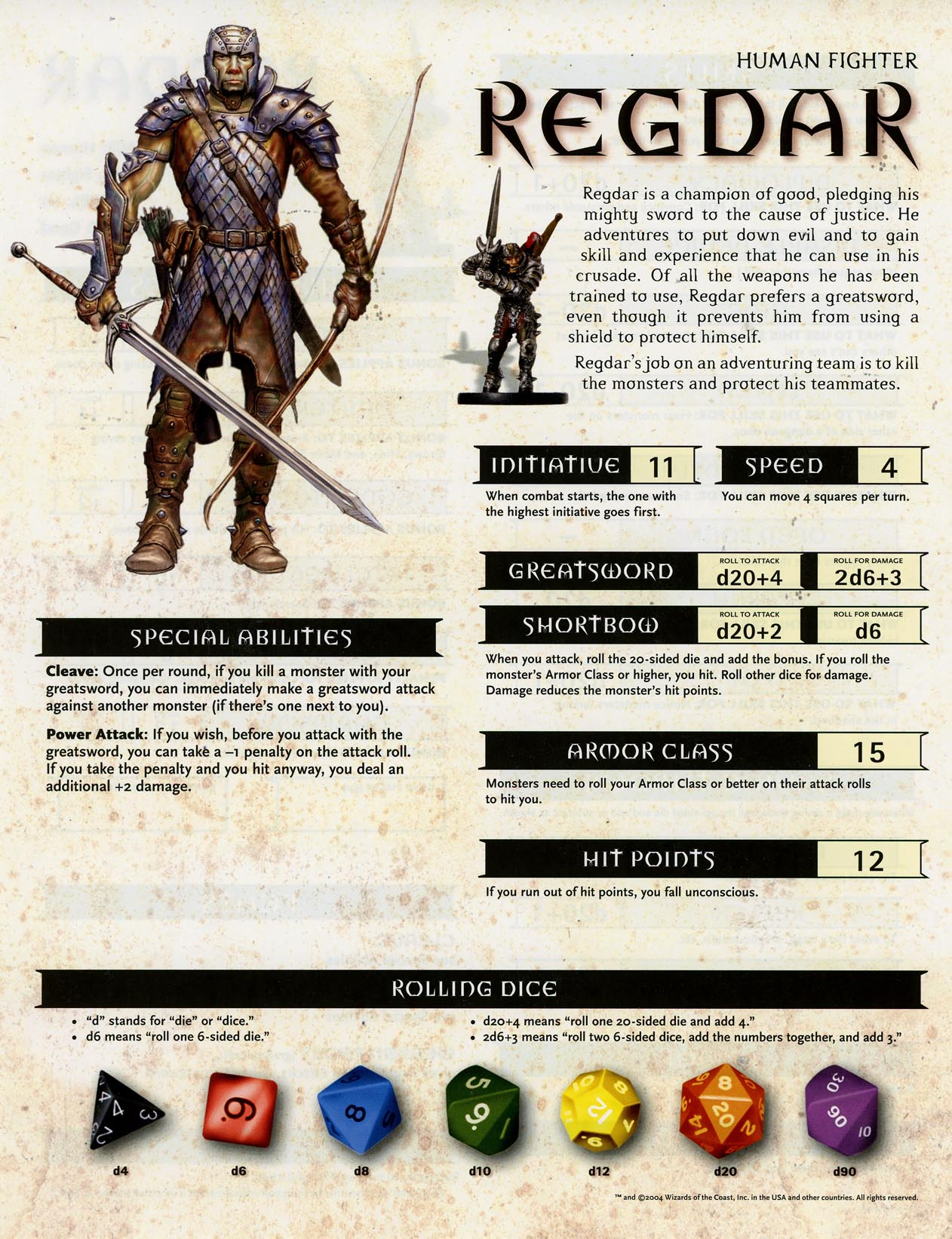