D&D General What Was Your First Time Playing and/or Running D&D Like?

I couldnt save Aleena 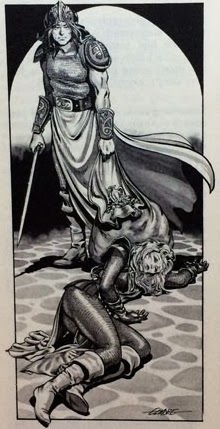 we were kids and had a blast, though often there were lots of debates - I didnt stick to the rules then either

first time running a game? Not so well. I had those Dungeon Geomorphs and put a bunch of them together to make a huge dungeon stuffed to the gills with monsters and treasure, to the point that the players' eyes started to glaze over with all the slaughter/dice rolling. No real purpose to it, no story, no background, just 'go here and kill things and take their stuff'....

1st edition, 1986. I was so excited to play a wizard. Then I discovered 1st level wizards suck.

After that, my usual character was a cleric or an elven multi-class fighter/wizard.

It would have been sometime in the 90s. I don't remember it, but I know we were running some of the thunder rift modules using the rules cyclopedia.

First game I ran was AD&D 2E. Players were my brother (who was only 7 or 8 at the time) and an older friend, who both made half-elf fighter/mages. I used the Haunted Keep (from the Moldvay Basic Rulebook) for the layout of my first dungeon, but discarded everything else, randomly populating it with stuff like neanderthals (which my brother intentionally attracted the attention of, because anarchy) and a mad gnome who wanted to know where his golden chariot was. That first campaign proceeded in much the same fashion, me making things up as we went...

The first games, we played without books and pulling notes with numbers from inside a properly shaken candy bag. We had no books and instead used photocopies from the pages at the back of the PHB. I got my 2e PHB a few of years after it was released. My first campaign as a player I rolled a human fighter, 3d6 in order, his highest stat was 14, in those days that didn't do much. We all ended up accumulating a large number of pets, and my character rode a giant fire breathing lizard. My first campaign as a DM was a post Legends Dragonlance game, involving a new dragon highlord of my own creation.

I can’t remember. I would’ve been 13 or so. Playing with friends in a classmate’s basement. I recall the look of the character sheets. I recall the binder with the loose leaf monsters. I don’t remember what my character was or what we were playing or who was DM or even who all was playing.

First time playing was in August or September 1988, a few weeks after I started high school. It was an AD&D game, and I was handed a thief to play. And it was a revelation!

First time running wasn't long thereafter. The DM of those early sessions had actually left school, and so disappeared shortly thereafter to start university. There was then a sequence of middling to poor DMs trying their best, before I decided to take on the role myself. I was probably better at the job than they were, but in my arrogance I thought I was a good DM which wasn't entirely true...

A D&D 3.5 campaign that I ran over MSN Messenger in the summer of 2010. The very first game started in a tavern when the party was randomly recruited by a city that was under attack by Drow forces, the captain of which was another player (who I'd make sure would switch to the party's side with shenanigans). I believe I ended the first session when the party + the Drow PC were trapped in the tunnels from which the drows came, and the second game was an adventure through an underground dungeon where the party released a BBEG and started working to stop them for the rest of the campaign.

When I look back on it, I basically committed all the cardinal sins of DMing: Starting in a tavern and later forcing down a needlessly strong plot hook, setting up PvP and betting that the party will come together later on... It's a wonder how that campaign survived as long as it did.

Then again, I remember the game not taking itself very seriously. The Drow PC was named Trizzt To'urden (and was of course a ranger with two scimitars), and we had a Halfling Rogue (later got the Assassin prestige class) named Dungen Siage. I had just finished Fullmetal Alchemist Brotherhood at the time, so I had also shoehorned in Alchemists that work with transmutation circles as a player option. It was very much a mixed bag, but it was a nice way to spend the summer. I can also proudly say that my very first campaign finished its entire story arc succesfully, which not a lot of people can do I reckon!

My first game was running the example adventure in the Mentzer Basic Set for my brother and my grandfather (in the latter case, his first game was also his last). It was probably around 1983 or 1984, so not long after the Mentzer revision had come out, not that we knew that at the time - we asked in the hobby shop for "Dungeons and Dragons" and that was what we were given, and we had no concept that the game had gone through different versions, or that there was an "advanced" edition.

None of us had any idea what we were doing, and their first encounter was with the darn carrion crawler, which would have been a TPK if I hadn't fudged it horribly. So I've been "cheating" as the DM right from the very beginning.

Stormonu said:
I don't really remember it. All I remember until I got my hands on Moldvay was that we entirely winged it
Click to expand...


I remember getting that boxed set too after I played my first few games with friends of my fathers. He bought the box used. I remember when I first got it reading the passage..."Rumor has it"...I thought to myself who is Rumor and what does he have? Thats all my 7-year-old pea brain could come up with. Me and my friends winged it for quite a few years until we got the hang of it.

My very first time playing was about 1983. I was about 7, and it was at a school festival/party. It must have been one of the parents running it. I don't remember too much about the adventure except that there were colored portals at one point and we had to choose which one to go through. Someone had a flame tongue sword and set a pool of oil on fire, which I thought was pretty cool. I thought that "magic missile" created a big red rocket like in the Roadrunner cartoons.

My parents got me the Mentzer Basic box a year or so later, which explained a lot!

My cleric got eaten by the carrion crawler beneath the fallen gate on the first turn of my first game.
I was immediately hooked.

Mid 90s, the 2e black box starter set that came with a cd. We ran those 3 dungeons it cane with. Shortly after I got my hands on a DMG and PHB. Ran several home made adventures.

Reynard said:
My cleric got eaten by the carrion crawler beneath the fallen gate on the first turn of my first game.
I was immediately hooked.
Click to expand...

It's a shame that "Back in my day, a carrion crawler was perfectly acceptable as the first encounter for novice players, and we liked it that way!" is a bit long to put on a T-shirt.

As a player: late in 1976, my mate Phil knew this lad from the year above in school who had this new game from the USA. The older boy, Dave, had designed a dungeon and Phil and I rolled up characters to explore it. Aelfric the fighter was mine and Phil had Amroth the wizard, with his one spell. We killed a giant spider, slept some goblins then got trapped and killed by orcs. I was hooked.

As a DM: I badgered for, and received, the white box set for Xmas 1976 and set about designing a six level dungeon those holidays. Weird how I can still remember the names of my friends’ characters who first trod the dungeon’s dusty (and totally ecologically implausible) halls. Celetan the mage, Valon the priest and Grimbold the dwarf fighter.

My first experience was when I was 9 years old (1981). We were on a scouts trip to historical sites throughout minnesota. We stopped at a hobby shop in Bloomington MN. My buddy (older scout) bought the Moldvay Basic and Expert sets. We played on the way home. I was hooked. My first character was determined with 3d6 (Fighter with a str of 14). I got the 5 AD&D hardcovers for xmas in 1983. By late 1983, I was told by my parents that I had to "calm down on the D&D stuff" 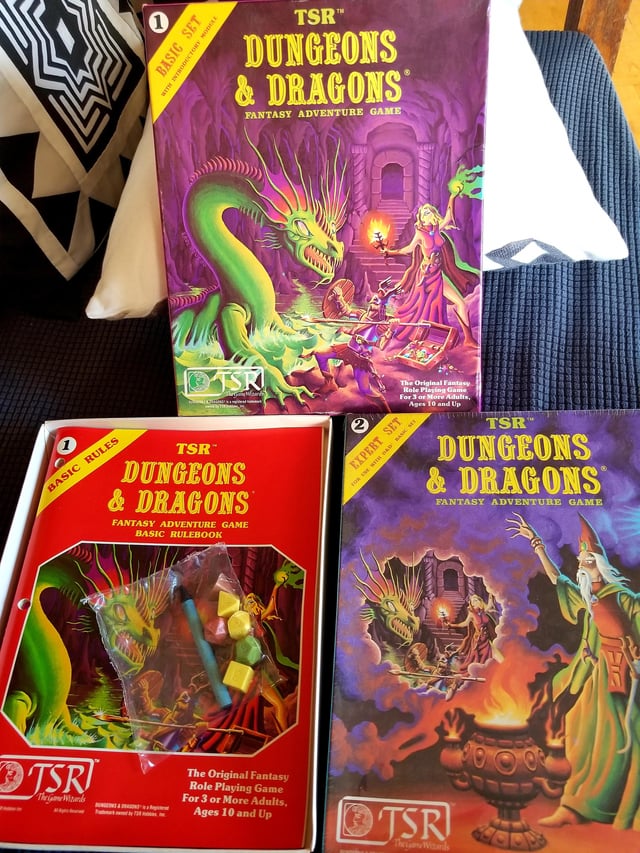 Publisher
1981, played with my older brother sitting in the front "yard" (I say yard, but it was really the space between all the mobile homes in Ketchikan Alaska. He was DMing. I was playing a cleric (Moldvay basic). I beat a skeleton in the first room, but had 1 hp left. He asked which direction I was going. The map was on the ground between us, so I said left, because my left was the door. His left was the wall, however, and he replied, "You walk into the wall and take 1 hp damage."

But I was still hooked

Emirikol said:
My first experience was when I was 9 years old (1981). We were on a scouts trip to historical sites throughout minnesota. We stopped at a hobby shop in Bloomington MN. My buddy (older scout) bought the Moldvay Basic and Expert sets. We played on the way home. I was hooked. My first character was determined with 3d6 (Fighter with a str of 14). I got the 5 AD&D hardcovers for xmas in 1983. By late 1983, I was told by my parents that I had to "calm down on the D&D stuff"

I got all my first gear at Schinders and then The Source in Roseville, MN.

The DM stuck us in Dragonlance with Paladine shoving his butt into everything with a ton of 'but thou must' crap, including forcing us to pull from DoMT. I pulled three. Got the Fighter one that gave me a level 3 dwarf bodyguard and was quite happy. Got the keep, which was the card I dreamed of pulling ever since reading the DoMT table. Was really happy.

Got Balance and my CG character is now LN and told by freaking Paladine I have to conform to that. Suffered three more sessions trying to get my crappy LN borepile killed only to have Paladine save him every time, locking him into a hellish life support where he knew he used to have a personality, but couldn't get back to it.

Me and the other player met up with some dudes named Andrew and Sharky; learned D&D could be fun instead.

3e shackled and brainboxed by houserules as god intended.

All woman cadre of players including the other player from the first game. All of them were chaos gremlins that loved pets, fire and looting what can not be looted. Game ran three years and actually ended naturally having eventually grown to 8 players, most of whom went on to be awesome DMs in their own right.

D&D 5E Heteroglossia and D&D: Why D&D Speaks in a Multiplicity of Playing Styles
2 3 4