(Just for reference. You're all at the star. The new chaos beast is at the furthest tree, 60 feet away. Meaning, it will take a double move to close. The beast is scurrying and sliding down the tree trunk incredibly fast.)

Alan surreptitiously pockets the bottles, and then sneaks - unsuccessfully - forward. Upon encountering the chaos beast, he gets into a fighting guard, fast as he can...

The chaos beast skittered off the tree and slithered toward the group. It wasn't fast enough to strike out at anyone with claw or tooth, but it looked much bigger now that it was closer, towering over Alan and Selythin.

Cousin Zenythin hesitated in the hallway, waiting to see what the rest would do confronted with the snarling beast.

(The beast already took its turn this round. Selythin's next.)

Selythin, with his black sword and shield ready, strikes the chaos beast as it closes in.

Eovin flutters near the ceiling ten feet away from the beast. She casts a spell and a puff of smoke flies from her hand to the beast.

(Selythin's action will take place as the beast closes to within 5 feet, on its next turn. Beast is 20 feet away currently. Eovin gets within 10. Alan is in the back, also 20 feet away, but can still take a move and action.)

JharyOConnah said:
(Selythin's action will take place as the beast closes to within 5 feet, on its next turn. Beast is 20 feet away currently. Eovin gets within 10. Alan is in the back, also 20 feet away, but can still take a move and action.)

Alan prepares to attack it in concert with the others, as it closes to within a single move...

Selythin blasted the skittering, slithering chaos beast as it started to close.

Eovin flew up, attempting to spray the beast with magic, but missed widely.

Alan held fast, ready for when the beast closed within melee range. (Since the beast never got there, Alan never got to attack.)

Instead of closing, the snake-like beast shot up into the air, opened it's cavernous maw and exhaled some vile, black breath onto the four adventurers (Selythin, Zenythin, Eovin, Alan).

Cousin Zenythin coughed and sputtered as he was enveloped by the darkness of the beast's breath. He slid to one knee, muttering inaudibly.

The beast NEVER CLOSED with the group. Instead, it floated and wrapped itself around the trunk of one of the large trees that ascended multiple levels of the castle. It was now 40 feet away, up a tree.

Being at the front of the party, Selythin suffers significantly from the beast's breath weapon. He is trained for this, and the pain only sharpens his mind as he send another blast towards the creature. Unfortunately, it is too quick, and the blast misses. Since this will likely be a ranged combat, his natural instinct to lead prevails and he says "take cover, we'll need to fight this one at a distance". he raises his shield, and takes cover only once all his troupes are protected.


Alan was not quite fast enough, and caught a lungful of the black goop, coughing furiously as the stench coated everything.


Then he uttered a quick word of healing to restore some of the vitality he'd lost...


Which restored most, though not all, of his vitality. Then he stood upright, glared daggers at the chaos beast, and tapped his bracers together, setting up a vibration that seemed to slither across the battlefield like a physical thing...

Eovin dodge over the black cloud barely being clipped by it. She casts Faerie Fire in the area containing the chaos beast. (Reveals anything invisible and creatures must make a Dex save (DC 14) or be outlined in orange light. All attacks against creatures who fail the saving throw have advantage.)

Selythin attempted to cover his compatriots as best as possible, maintaining his hex on the snake-like chaos beast as it continued to skitter up the closest three-story tree.

Cousin Zenythin still clutched at his torso, head down. He tried to stay near Selythin.

Alan, hurt from the blast of nasty breath, used healing magic to stay in the fight.

Because of Selythin's hex, the creature couldn't get out of the way of Eovin the pixie's faerie fire, its claws cutting deep gashes into the trunk as its grip slipped.

The chaos beast lit up a brilliant orange color, highlighting it to the group. It was now 60 feet away, up the tree, attempting to climb away onto the second floor.

(If the beast continues on its course, it will disappear onto the second floor next round. Obviously, it will still be glowing as long as Eovin's spell lasts. You could fly, climb the tree, or take the nearby stairs. Climbing would require a strength check and take a couple rounds. Not to mention, you won't be surprised, but you could be attacked from above.)

your dramatic descriptions of your characters actions this last round! All three of you take an inspiration for good roleplaying.)

(One more round of ranged attack with advantage before the chaos beast goes through the hole to floor two.)

Alan decides that if this thing is coughing acidic breath at them, then closer is better. So he takes the stairs, rapier out, attempting to catch it before it disappears - cursing himself for not taking a shortbow with him.

The pixie flies forward to within 30 feet. As she does so, a ball of flame appears in her hand and she throws it at the beast. It hits the beast square but seems to roll of its fur without too much harm done.

Selythin grins with satisfaction when their enemy lights up. He does not hesitate, and flies up to it in a straight line while he throws a beam of force at it.

Positions of characters at beginning of the next round... 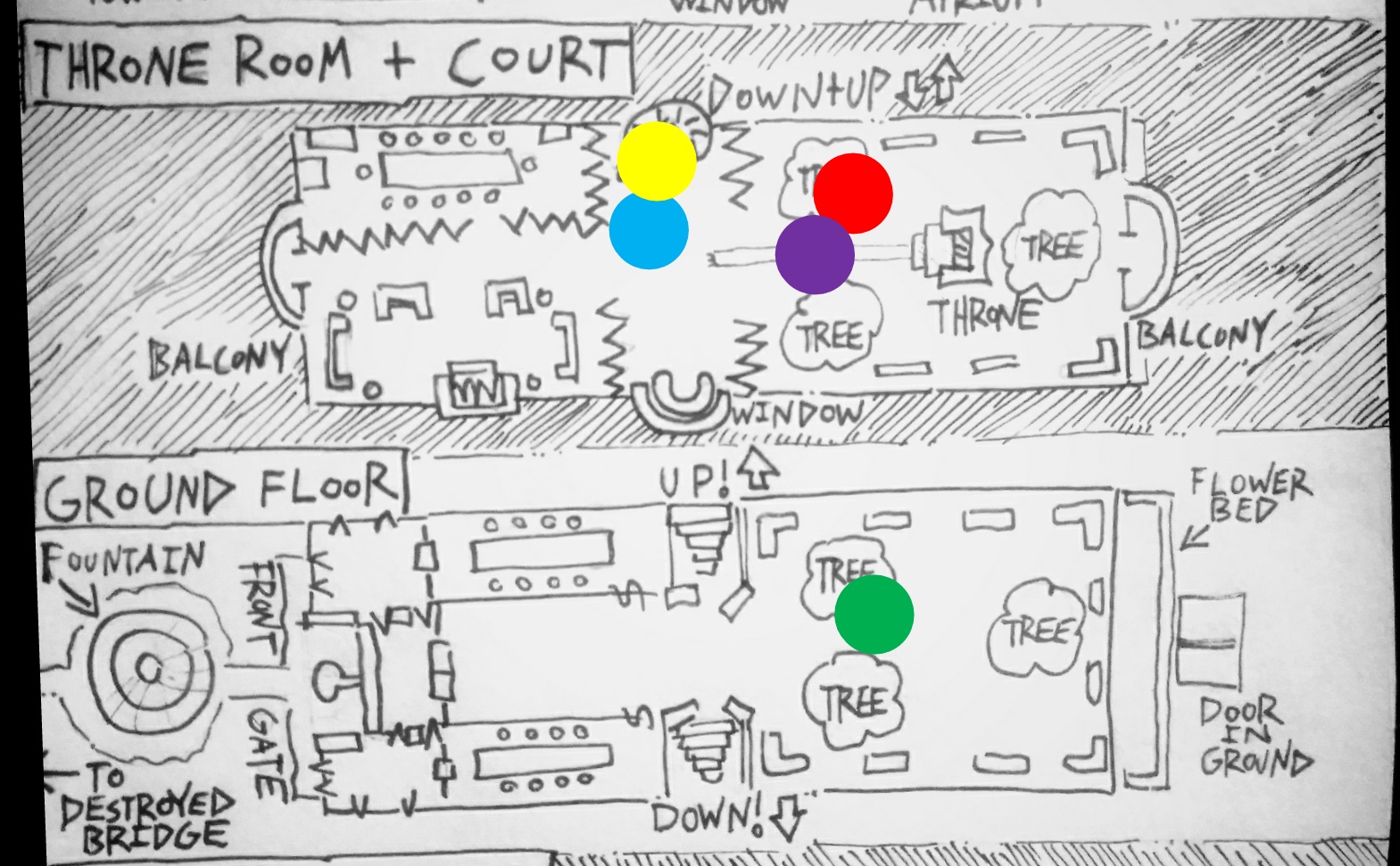 The strange black snake with wings, claws, and fangs continued scritch-scratching up onto the next level and into the abandoned throne room of the dead faerie queen. It was hurt, dripping some sizzling acidic blood as it pulled itself up the tree and onto the broken tile flooring.

It skittered across the ground, coming quickly at Alan as he ran into the doorway of the stairwell. Zenythin, right behind the young tailor, still on the stairs, shouted: "Watch out! It's going to breathe on us again!"

Instead of breathing vile bile, though, the beast crashed right at Alan, swinging claws wildly.

Selythin's hex and Eovin's faerie fire still effected the gruesome creature. Its attacks went wide as Alan put his rapier between himself and snarling chaos beast.

The momentum of the beast, and the swinging and missing, caused the beast to crash through a curtain dividing the north-west area containing a large table and many chairs from the rest of the throne room area.

Alan was still within striking distance. Eovin and Selythin were still about 40 feet away.

Selythin cannot hide his smile as the beast crashes into the furniture. He flies towards it as he conjures a bolt of magical energy.