Once again we turn to Ancient Greece as Epic Monsters delves into one of the world’s most infamous arachnids: the boastful weaver-turned-spider Arachne! 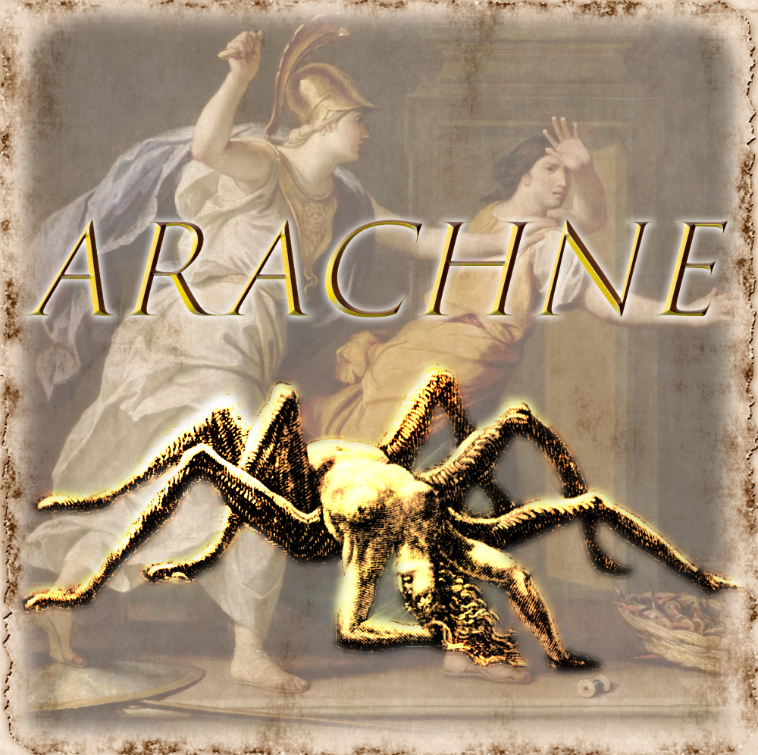 Though her story differs here and there depending on the exact source, pretty much all of them tell of Arachne talking up her weaving skills. Her lack of humility was so great and so encompassing that Athena takes notice—partly because she gives the goddess of wisdom no credit for her talents—and, disguised as an old woman, challenges Arachne to a weave-off. To Athena’s dismay and frustration, the woman does a much finer job during the contest and even weaves a depiction of how divine beings have mistreated humans over the years. Athena is not amused and (sometimes curses her, reviving her after a self-hanging then) transforms Arachne into a small, eight-legged insect.

Design Notes: I have obviously taken some liberties here largely because we have enough standard spiders already—we do not have creepy human-spiders, or at least, not enough of those. That said she’s a pretty simple creature: she’s good at grappling, climbing, and jumping, so whether Arachne is encountered alone by lower-level adventurers or in large groups by high-level PCs, it should make for a creepy, fun, and frantic encounter.

Expert Grappler. Arachne has advantage on attack rolls against a creature she is grappling, and she can grapple creatures up to two sizes larger than her. In addition, she can use her bonus action to try to pin a creature she has grappled. To do so, she makes another grapple check. On a success, the creature is restrained until the grapple ends. While restraining a creature in this way, Arachne kicks two fewer times than normal.

Magic Resistance. Arachne has advantage on saving throws against spells and other magical effects.

Spider Climb. Arachne can climb difficult surfaces, including upside down on ceilings, without needing to make an ability check.

Multiattack. Arachne kicks six times, or she attacks once with her web and kicks four times.

Web (Recharge 5–6). Ranged Weapon Attack: +6 to hit, range 40/80 ft., one creature. Hit: The target is restrained by webbing. As an action, the restrained target can make a DC 14 Strength check, bursting the webbing on a success. The webbing can also be attacked and destroyed (AC 11; hp 8; vulnerability to fire damage; immunity to bludgeoning, poison, and psychic damage).