Quixt casts his ol' stand-by spell (Magic Missile) at the most wounded demon, to good effect! Quixt is able to easily conquer the demon's spell resistance, and NO ONE is resistant to force energy, without the aid of specific spells (such as Shield); the vile creature gasps as the energy bolts slam into him, weakening his life force! However, by seemingly sheer will, the demon remains standing!

Demon #1 is mildly injured [5 pts.]
Demon #2 is SERIOUSLY WOUNDED [24 pts.]
To everyone's surprise, the demons do NOT charge the party! They remain in place, telepathically communicating with each other for a brief moment, before beginning to concentrate...

Of the four demons, three of them shake their heads in disgust, while the fourth one smiles in triumph! Another demon appears, bringing the total number of foes to 5!

Realizing what is occurring, Hawke decides to speed things up a bit.... by charging the most wounded demon (#2).

Nimbar follows suit by moving up a little, and casting Haste on the party; Everyone feels suddenly adrenalized, lighter in step, quicker of pulse! 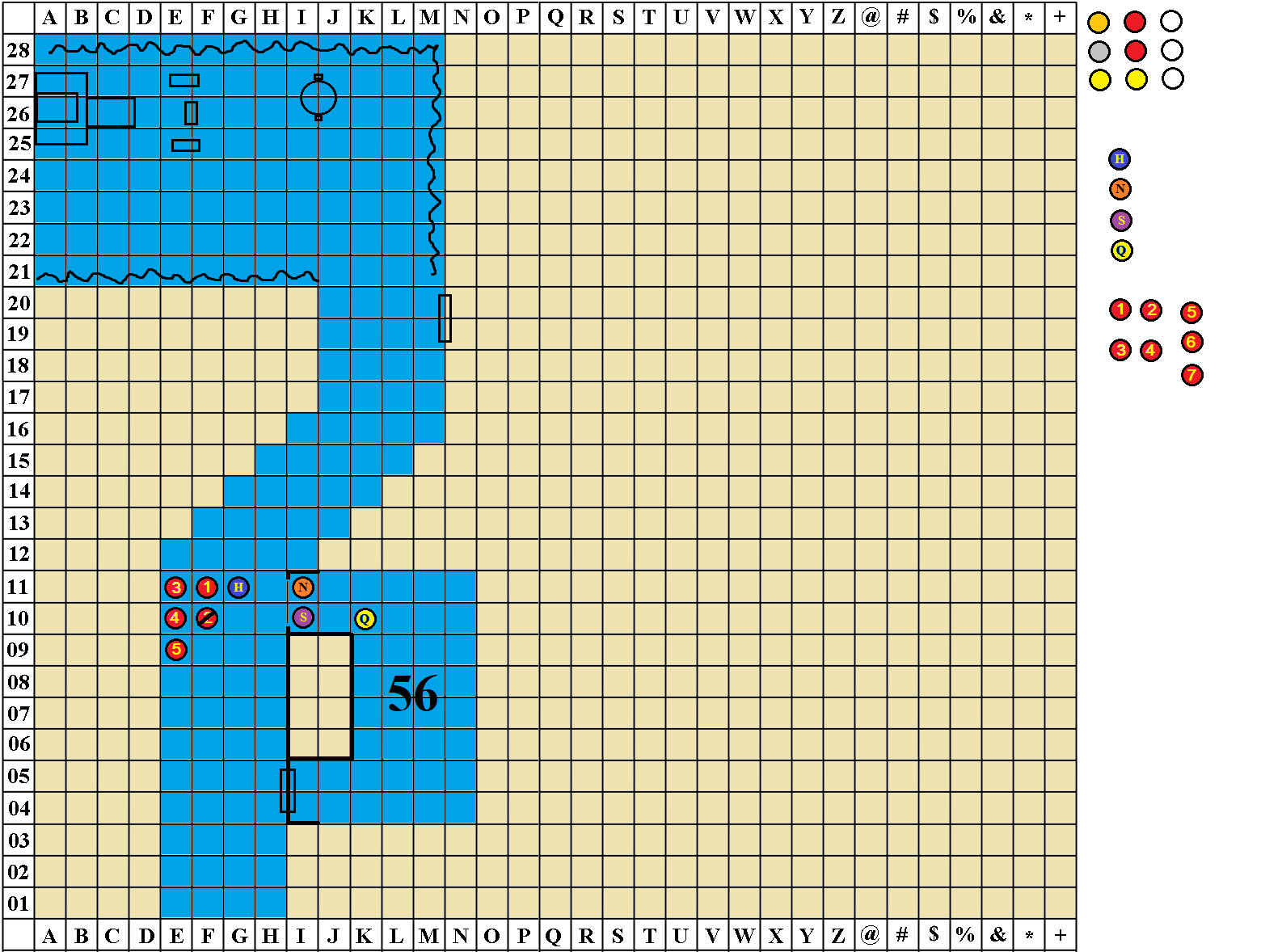 Sphynx takes a step forward (H10). Quickly understanding that fire is not the operative method of attack, like Quixt, he switches to magic missile. Using both hands to gesture and divert the direction, he sends to shards of bluish light into the demon directly in front of Hawke and two into the new arrival.
Level 2:
Magic Missile: 1

Sphynx assaults two of the demons with mystical force energy, his spell having its complete and intended effect! While both are still standing, they are also weakened somewhat, and in dangerous proximity to the party's heavy hitter. And they know it!

Quixt invokes his scroll, which he himself enchanted for maximum effectiveness, and watches as the spell once again has a PROFOUND effect upon the vile creature! The demon winces in pain, as the pressure causes him to begin bleeding from his left eye! He is BARELY able to stand, and looks to be near death after the mystical assault!

Demon #1 is SEVERELY WOUNDED [27 pts.]
Demon #2 is DYING [-4]
Demon #5 is Mildly Injured [7 pts.]
Demons #1, #3, and #4 move into position to partially surround Hawke, whom they see as a threat. All of them get their full attacks, having each only taken a single square adjustment. Demon #5 concentrates, and another of his kind (#6) suddenly appears!

Although out-numbered, Hawke is the superior warrior. The demons' attacks are clumsy, slow, and ill-timed. Hawke is able to fend off the wicked-looking double axes that the demons wield, much to their surprise!

Hawke, being Hasted, moves even faster than before, bringing to the demons a veritable storm of pain and steel.

Hawke's first blow breaks Demon #1's neck, and the creature slumps to the ground, in a motionless heap, where it begins to die as a result of internal injuries.

Hawke's remaining attacks are focused on Demon #3, who survives the assault, but whom also looks as if he might be in trouble, if such a pounding continues. Only the blow from the small hammer is absorbed completely by the creature's tough skin; the big hammer proves to be quite effective, however.

Nimbar moves into position in order to have a clear shot at Demon #3.

Thinking that Scorching Ray would still have a slight effect, and hoping that concentrating 2 rays upon a single opponent would have a greater effect, Nimbar directs two rays of fire at Demon #3; the plan works, although still not as well as Nimbar had hoped. The demon is burned, but not badly. However, in combination with Hawke's bombardment, the demon looks really beat up now.

As his extra movement action from Haste, Nimbar reaches over to Hawke's belt, and draws out the Wand of Magic Missiles that Hawke is carrying. Hawke, knowing Nimbar's motive, makes no attempt to stop him. 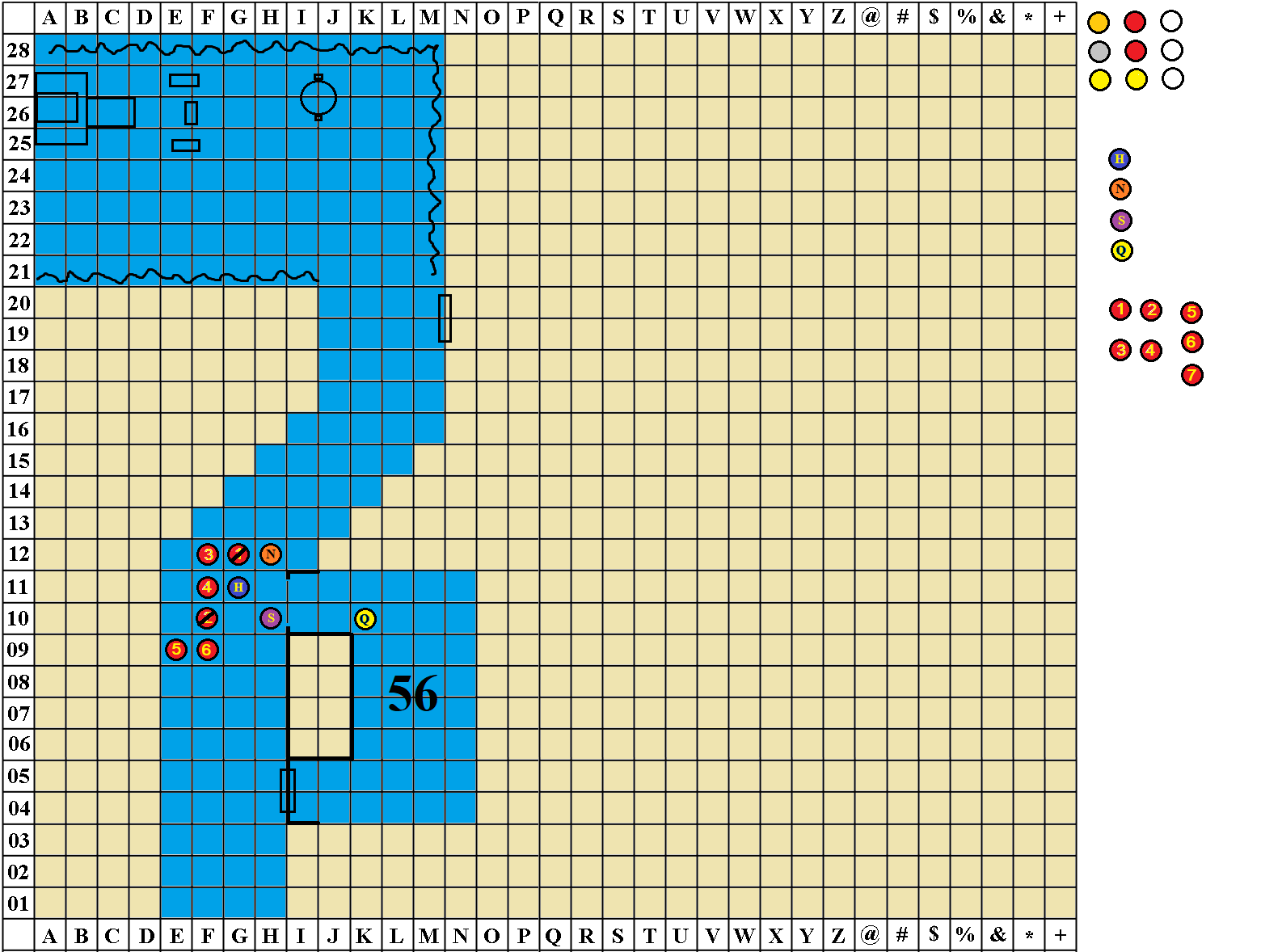 ROUND THREE IS BEGINNING! SPHYNX, it's your turn! What do you do?

Limited in his variety of magics, Sphynx takes a step to his left (H9). He twirls his left arm in an overhand gyre, releasing four shards of blue light at the enemy directly in front of Hawke.
Level 2:
Magic Missile: 2

Your Magic Missile spell slams into the fresh demon, and takes the wind out of him; he is clearly not accustomed to having his spell resistance pierced time after time. 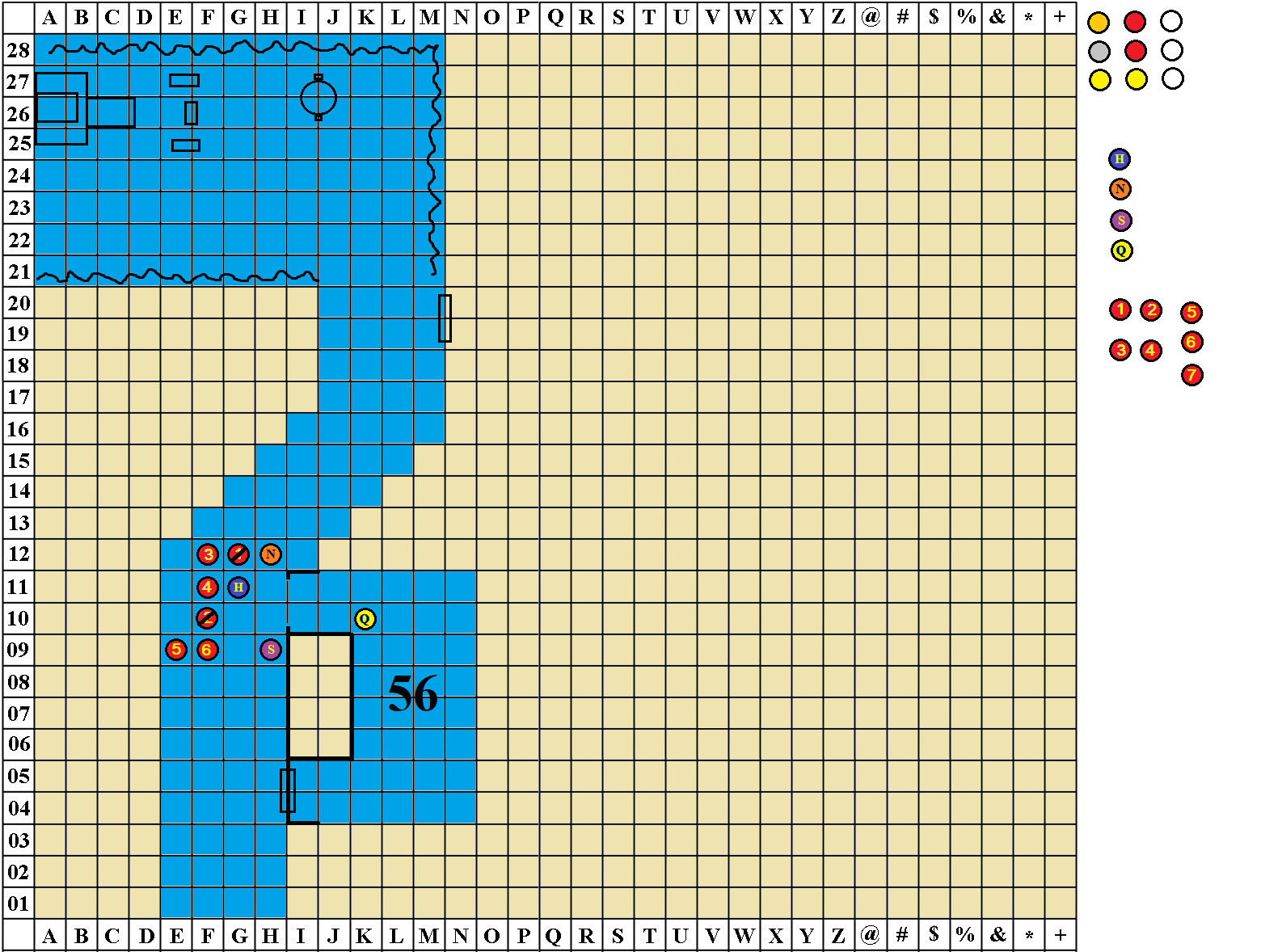 Quixt:
Moving to engage the creatures more conventionally, Quixt readies his bow and notches a silver-tipped arrow while moving a little closer and more to the right of Sphynx (5' adjustment to J11), and shoots two (2) arrows (Hasted) at one of the creatures (#6). The first misses as a result of moving and drawing and aiming too quickly. The 2nd strikes home (Damage = 6).

Demon #6, who had just begun concentrating, in an attempt to summon another of his kind, is surprised when the silver arrow strikes him!

Although the arrow is not enough to drop the the demon, it IS enough to disrupt the demon's summoning! A figure begins to appear, then fizzles out, as the demon winces while reciting the Abyssal words, saying them improperly, and causing the figure to wink out of existence. The demon utters a curse in his native tongue that is lost on you.

Demon #3, who still can't get into a flanking position (Nimbar is in the way) nevertheless continues to attack Hawke.

Demon #4 takes a free action, in order to douse the area in shadowy darkness! As he does so, he too attacks Hawke with his big double axe.

Demon #4's tactic of invoking the area of Darkness backfires, as the one attack that might of hit MISSES, because of the tricks played by the shadowy effect. Hawke, who can see just fine because of his Lowlight Vision, is easily able, once again, to block all of the demons' clumsy swings.

Hawke tries to return the favor, raining blow after blow on Demon #3, but somewhow, the demon is able to parry every blow, except for one. Although the concealment effect from the Darkness does not save the demon, his tough skin does! He takes only a bad bruise from the massive warhammer, but combined with his previous wounds, he is beginning to look pretty bloodied.

Nimbar does not use the wand this round, despite having retrieved it from Hawke's belt; he still has a memorized Magic Missile, which he invokes, sending two bolts at two different targets (Demon #3, and Demon #4.)

One of the demons slumps to the ground, as the force missiles find their mark. The other demon cries out, in a combination of rage and despair, as the two bolts rip into him! 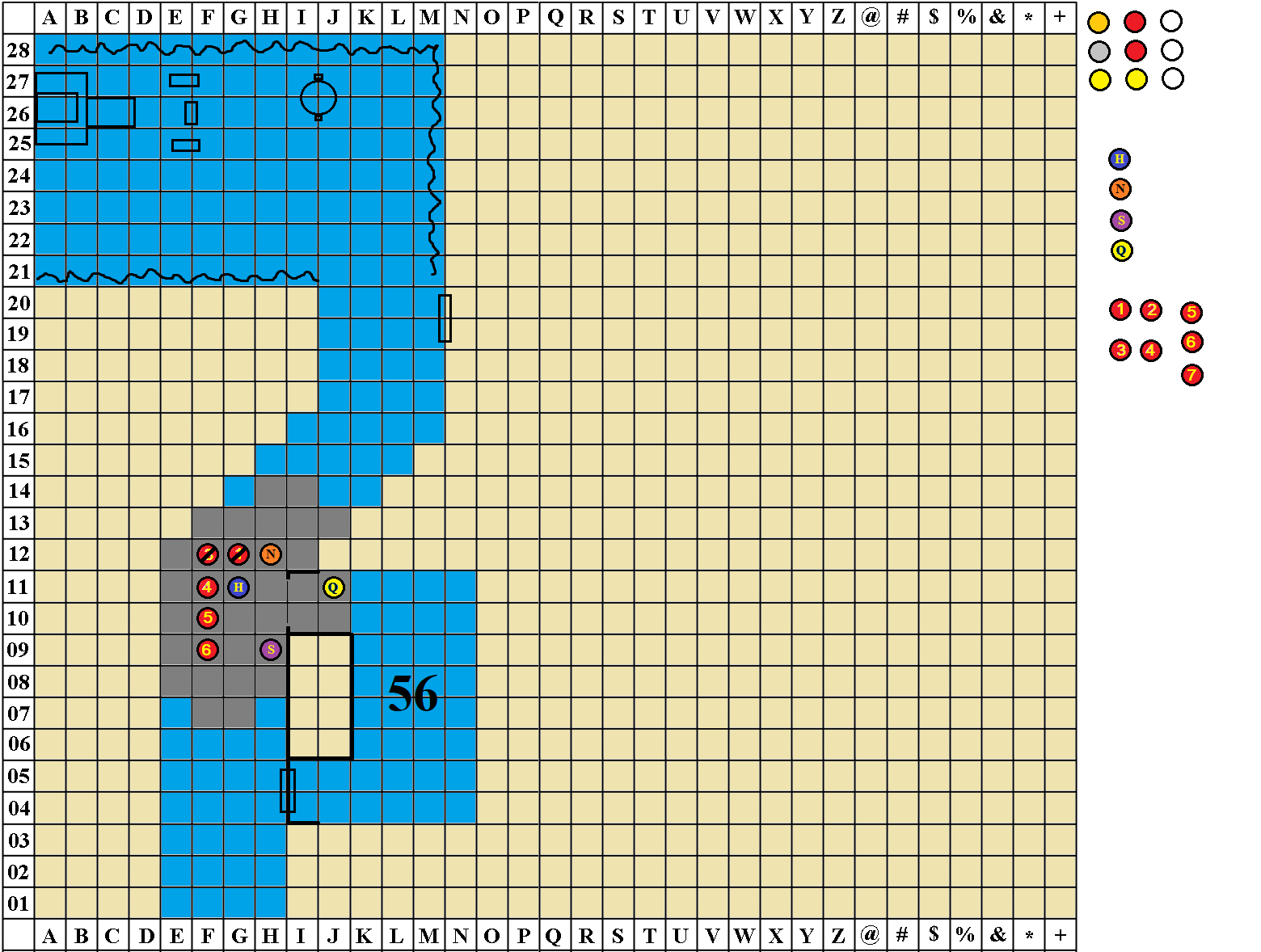