Jack sizes up the prisoners, looking for any hint of mischief. He then communicates silently to the party using the mindlink:
~We have quite a force gathered here. Assuming some of these prisoners can be of help, this might be our best chance to take out the Hill Giant Chief while many of his guards are away.~

Jack looked over the prisoners, assessing their capabilities and potential to cause him trouble. The orcs were proud and independent. They were in no shape to cause trouble at the moment, but they would likely have their own ideas on how to proceed. In addition, Jack wondered if they would be offended to learn of all the orcs that had died at the hands of the party in the kitchen. They were busily picking through the bodies of the bugbears, arming themselves.

The merchant Zandor clearly had no head for the sort of danger they would find here. He was nervous to the point of shaking, and Jack doubted that he could keep his head in any conflict. The two guards seemed steady enough, and used to following orders.

The elf Tamanar would likely be a formidable ally. In spite of his injuries (and having been chained, dangling, to the wall of his cell), he moved with grace and purpose as he too, gathered what weapons he could off of the fallen bugbears.

~<We need to move. Out the way we came, long underground passage, hidden cavern, or rescue more at the forge?>~ Eoghan asked again, with enough emphasis to show that the last option was his preference.

The younger races and their rushes to death. He holds his hand up in the universal sigh of "hold on a second".

Tenibor will ignore the entity in the closed cell for now. He greats Tamanar with the appropriate formality. In elven: "In one cell, we have found a passage (nods that way) in another something that is unclear (nods to the other)." "Know ye anything of these, or perhaps your fellow prisoners, that may be noteworthy?"

Also: back wall broken...as in an escape?

Tenibor and Tamanar greeted each other in Elven, discovering that they were removed cousins on Tenibor's paternal grandmother's line. While the politics were complex, this made them instant allies.

"A dark elf named Lutzhan E'gregan escaped about a year ago. I had only seen him once, as he was taken past my cell. No one knows what became of him. This must be the way he got out of his cell, but it may not lead to the surface. Indeed, it may not lead to any sort of salvation."

He stretched and rubbed his wrists, which were in rough shape from months of being chained, then he looked around and added, "As far as I have been able to gather, no one but Nosnra is allowed to enter the long hallway to the east. He orders anyone with him to wait here. While that has some interest to me, there are two giants to the south-west who delight in torture. I should very much like to end them."

"Gorshk!" exclaims Bible, turning to her wee companion. "Looks like things are about to get rough again."

Seeing the halfling is unarmed, Bible pulls a bellaying pin from her belt and hands it to Cordit.

"'Ere, I'm sure you remember how to use one o' these, in case you be needin' to defend yerself. But don' get any heroical type ideas. Stay back an' leave the fightin' to me."

To the others in the party, Bible thinks, ~<If only the chief is allowed in that hall, then maybe the prisikners'll be safe in there while we bust the rest of 'em out o' the forge. Le's check it out first though.>~

So Tenibor thanks the knight and apparently mentions the hall.

The mystery around it reminds him of some lore he learned before this adventure, from what seems like many months ago.

~Perhaps. But we must scout the hall first. Who knows to what it leads~

OoC: Is it the double doors to the north of his current position? Tenibor will carefully head towards this hall. Listening and going through those doors, as needed.

As a group, they continued to discuss their options. Cordit was happy to take the belaying pin from Bible. She nodded bravely and smacked it into her other hand, saying, "I'll give 'em what-for if they try to get me, but I'll stay outta th'way. I'll look out fer Zandor."

Zandor looked shaken at even the mention that he might need 'looking out for'. He looked as if he would be ill and said, "I could stay in my cell until it is safe!"

The orcs seemed to be prepared to set out on their own if the group wasn't interested in heading south, but they were willing to wait to find out which it would be.

Tenibor checked the long hallway, which arched away out of sight to the north-east. Evern with the hammering from the south, he could hear the sound of running water from somewhere in the distance up the hallway.

Olwen announced, "They have captured a group of dwarves, who are forced to assist a fire giant who works a forge. That is where the noise is coming from."

A fire giant. I knew it.

~The orcs want to go south? Will they fight?~

Tenibor will go 60 feet down the hall, or until he sees something.

While Tenibor checks the giant-chief's hallway, Bible pulls a tinderbox from a belt-pouch and a torch she had wedged under her belt. Lighting the torch, she takes a few steps into the cavern at the back of the drafty cell peering into the gloom to see if it might offer a viable means of escape.

Tenibor ventured a short way up the chief's hallway. Tamanar followed, saying (in elven), "I will stand by your side."

The hallway arched to the north-east as the followed it. Soon, it bent again northward, opened up into a chamber who's walls were made of very worn stones (many hundreds of years old). The ceiling must have collapsed, as it was missing large pieces of rock and dirt, and was reinforced with newer-looking buttresses. It had been cleared and repaired, but the east wall had a hole in it, relatively freshly dug through by the uncleared debris, and the far wall had collapsed. It was only partly cleared and opened to a larger natural space as it went further north and west, to the limits of the elves' darkvision. 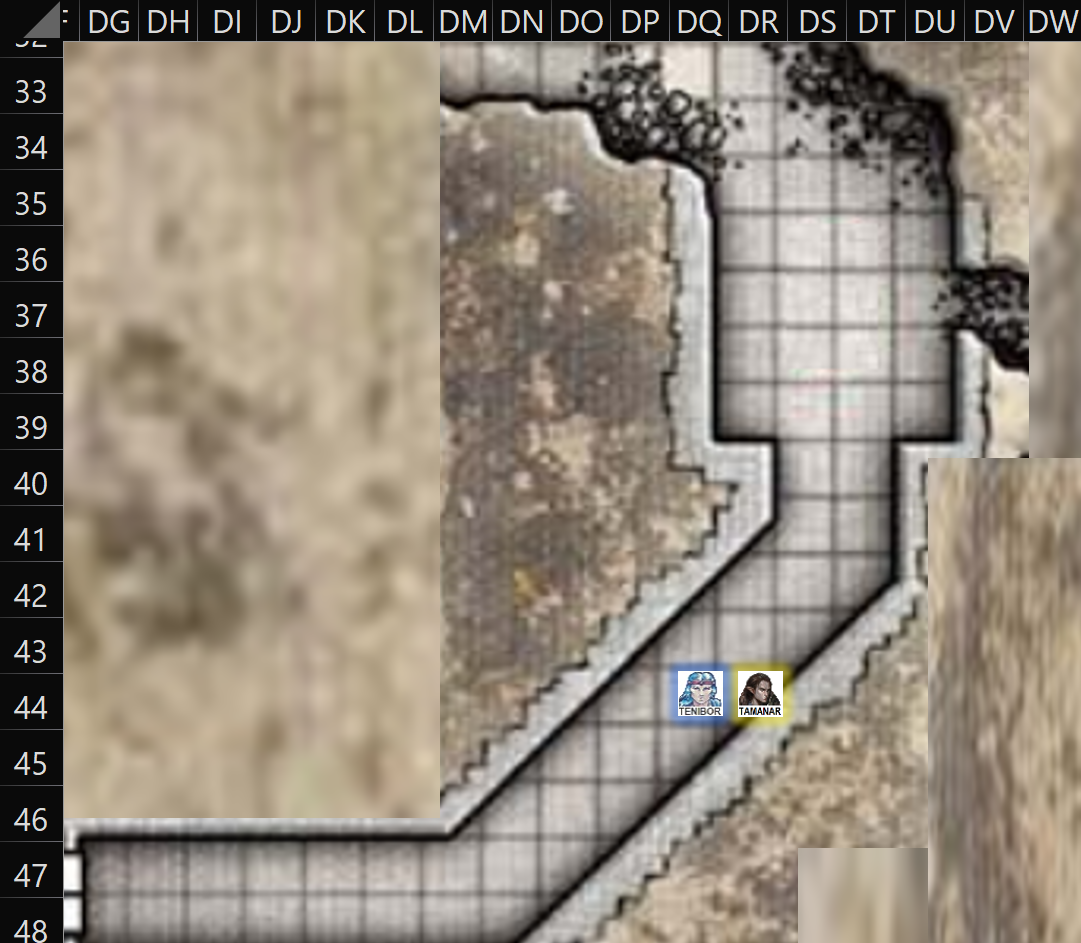 Bible lit a torch and moved to the back of the cell that Tenibor had discovered. She held the torch out before her, and it illuminated a natural cave's tunnel-system. To the south it split into two around a natural column. To the north-east it split into a northern tunnel strewn with rubble, and an eastern tunnel that was damp and led downward. Directly across from Bible, to the south-east, was a hole that disappeared into darkness.

"Folks could get mighty lost in here!" declared Cordit at Bible's side, "I'd much prefer th'open sea air an' a fine stiff breeze, meself."

Her voice echoed in the tunnels and somewhere beyond the torchlight, something moved. There was the sound of a heavy weight dragging on stones. 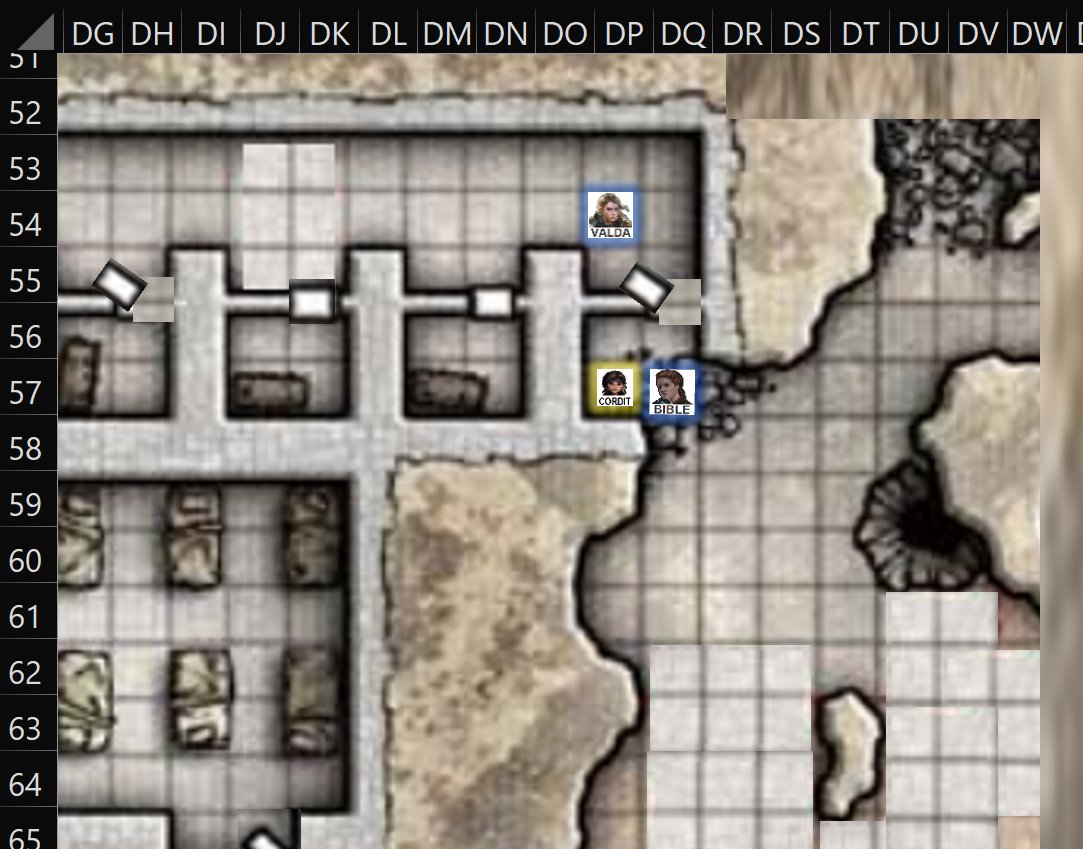 "Stay back," Bible cautions Cordit when she hears the dragging sound in the darkness, "this ain't no safe place for you."

She steps forward again and tosses her torch in the direction of the sound, hoping to catch a glimpse of whatever it was that moved.

Eoghan was standing right outside the Chief's Hallway, so when Tenibor and his new elf friend went down it he followed behind them, the bandore ready to strum forth the magic in music.

They will go ahead by about 40 feet.

Jack sticks with Bible, covering her with Darling as she peers into the cavern.

The orcs had agreed to wait until the other possible directions had been briefly scouted. They were somewhat impatient, telling Eoghan that they wished to "liberate their kin". But they were in poor condition to fight giants on their own, and they weren't foolish. They waited in the large chamber, stretching, checking themselves over, and practicing with their newly pilfered morningstars.

Eoghan followed Tenibor, who was emboldened by his support to push on a little further to the north. They moved into the old cleared chamber. Through the hole in the eastern wall they could see a natural cavern formed from an old underground watersource, now just a swift-moving creek. To the north, the unfinished work of clearing the old structure left rock and debris all about, but they had cleared two paths: a dug tunnel to the north-west that after a false start, led to more worked stone blocked with an old iron portcullis.

The other path, directly north, dropped down a wide flight of stairs. 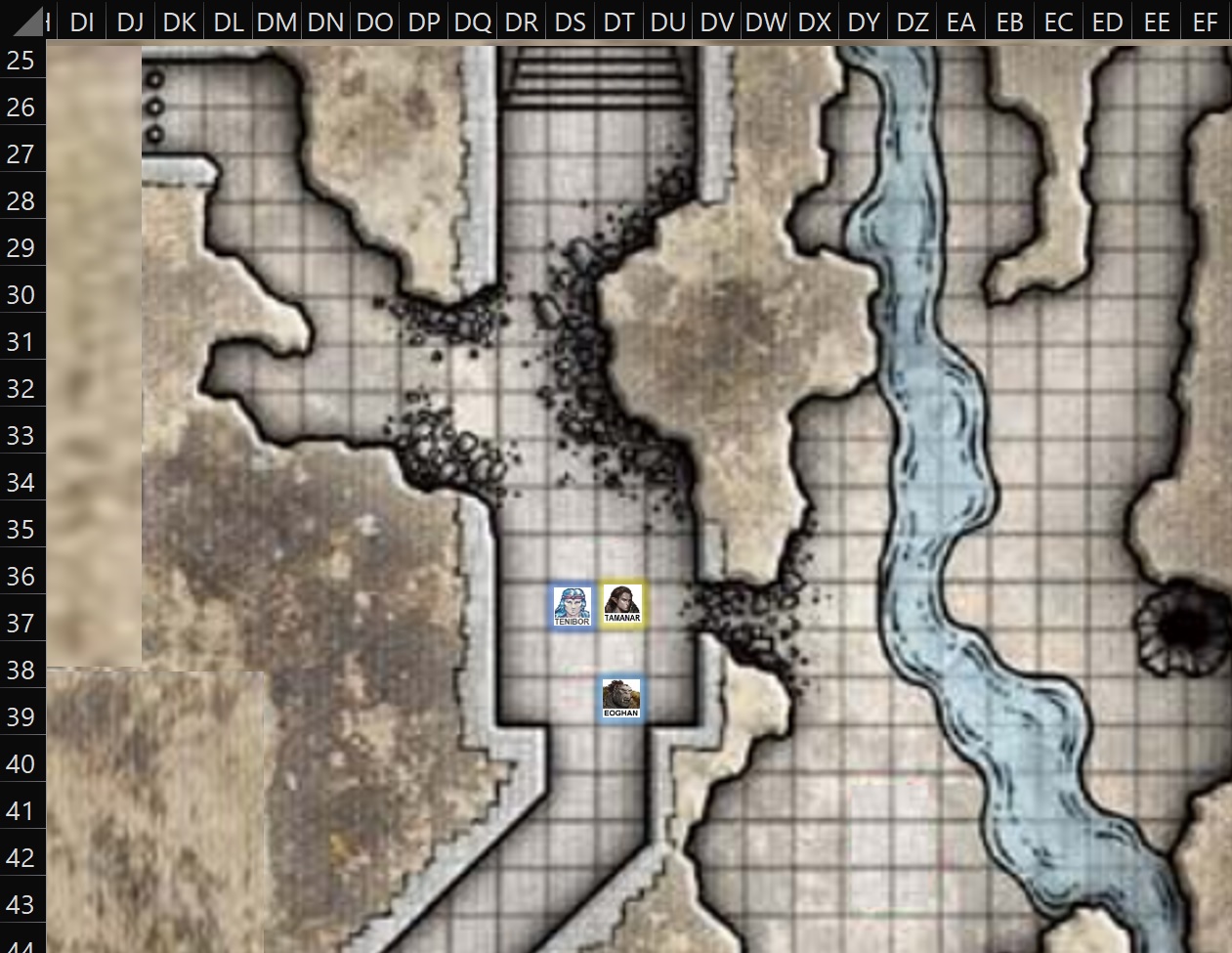 Jack joined Bible and Cordit as the reeve threw her torch into the cavern, in the direction of a noise. The torch sputtered on the damp ground, but it revealed a large natural cavern that opened widely to the east. In the dim light beyond the torch, another hole bore into the earth, but no creatures could be seen.

Whatever had made the sound was either further away, behind a pillar of rock, or down one of the holes. 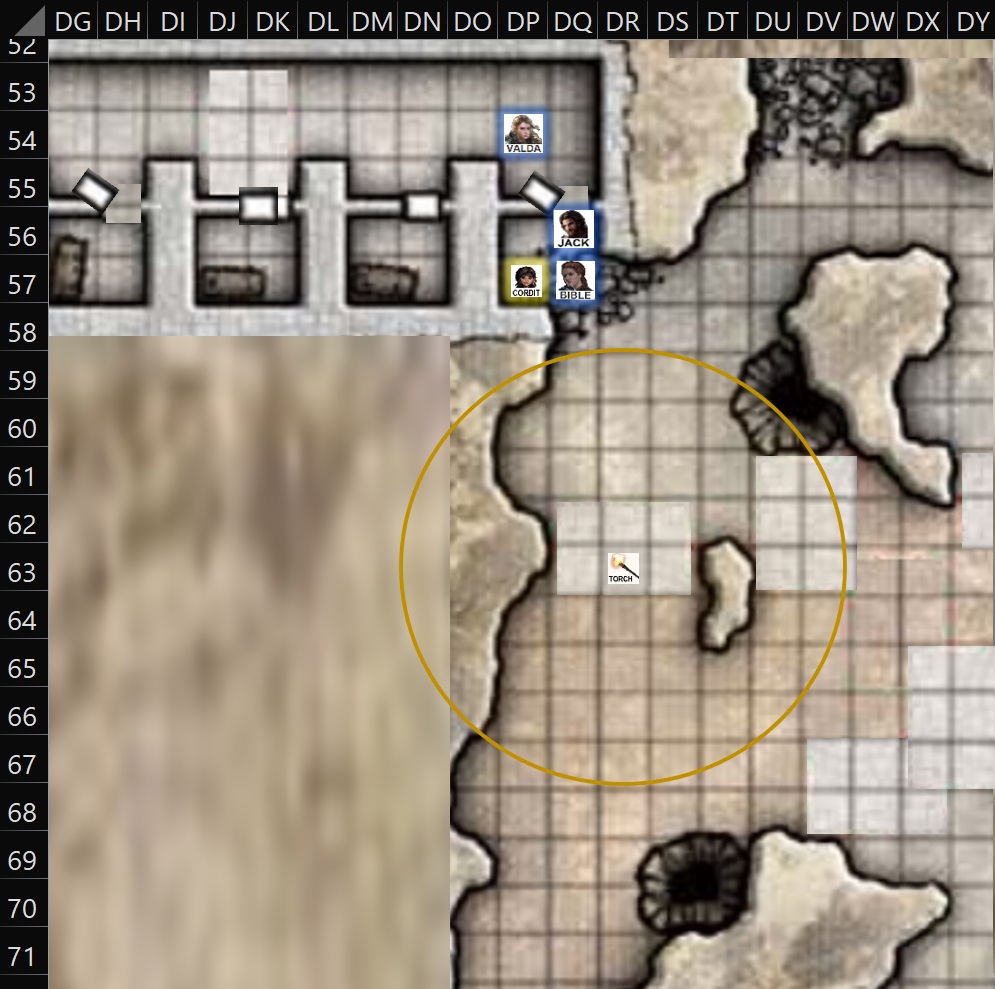 Note: The yellow circle is bright light from the torch, but dim light goes out to about the edges of the map.