In elven: "this horrid stead was built on something much older. We must deal with the giants at the forge, but then this must be explored further."

To the group: ~We are finding signs of much older construction and natural caverns. It is worth exploring, but for now it may be better to confront the giants to the south. We are returning soon~.

Finally, to Bibles request, he searches carefully for who else may have been walking in this hall recently.

"Ahoy!" Bible calls out into the cavern in a low voice, squinting at the darkness.

"Phooey!" she says, spitting on the cave floor as she turns to the guild thief standing over her left shoulder.

"Wha' ja think, Jack?" she asks. "This don't look too promiskin' as a way out and ain't no safe place for Cordit as I was hopin'. Le's go back in the hall and shut the door to keep whatever it is from sneakin' up behind us, unless you think it warranks further inveskigation."

“Aye,” answers Jack. “Sounds like there’s more giants that need killin’, and the sooner we get ‘em, the better.”

~<Let's not wander too far, in case someone comes down or out. The long corridor is promising, but I'd say if we are going to rescue the dwarves from the fire giant, we need to do it now.>~

To Tenibor and the others, Bible thinks, ~<We found natural caverns in thisk direction too. Could be they connect up some way. But there's something in here too, something big.>~

As long as no response is perceived to Bible's Ahoy, she turns and leads Cordit out of the cell, closing the door when it's empty, and heads toward the room outside of the forge to reconvene with the party.

"Don't worry, me little Swee' Cordit," she says to her friend as they walk along the hall. "You'll be back on the high sea before you know it. We jus' has this one las' fight to win. We ain't gonna leave no one behind. Jus' stay out of the way and see you don't get hurt"

When she gets to the door to the forge, she removes her helmet and presses her ear against it to get an idea of what they're up against.


OoC: I think we have decided on the forge, or most of us have. But, I am still waiting to hear back from the DM on Tenibor's last check, and on Bibles.

There was little sign of movement in the old chamber at the end of the long hallway. It was likely that the chief didn't go down here often since the chamber had been cleared of its collapsed ceiling. The hole in the wall that lead to the natural cavern was more interesting. It appeared to have been tunnelled through from the natural cavern, not the other way around (as had been seen in the back of the cell). Something had broken through, and had done so some time since the collapse had been cleared. Rubble from the wall still lay scattered in front of the hole.

When the group reunited in the main chamber to discuss their plans with the liberated prisoners, Tenibor and Bible agreed that it was likely that the two parts of the natural cavern that they observed would join at some point.

Quinn, who had been gathering information from the ex-prisoners was able to point out two more options to add to Eoghan's list: The orcs claimed that there was more of them, enslaved and digging to the south (past the forge, but the forge could be bypassed, they said, by going down a large central corridor).

Other prisoners pointed out, (and Quinn had earlier heard the sound of it from near Tamanar's cell), that there were two hill giants torturing a prisoner (or two) in a room that was through a smaller door that was to the south-west (and directly north of the forge). 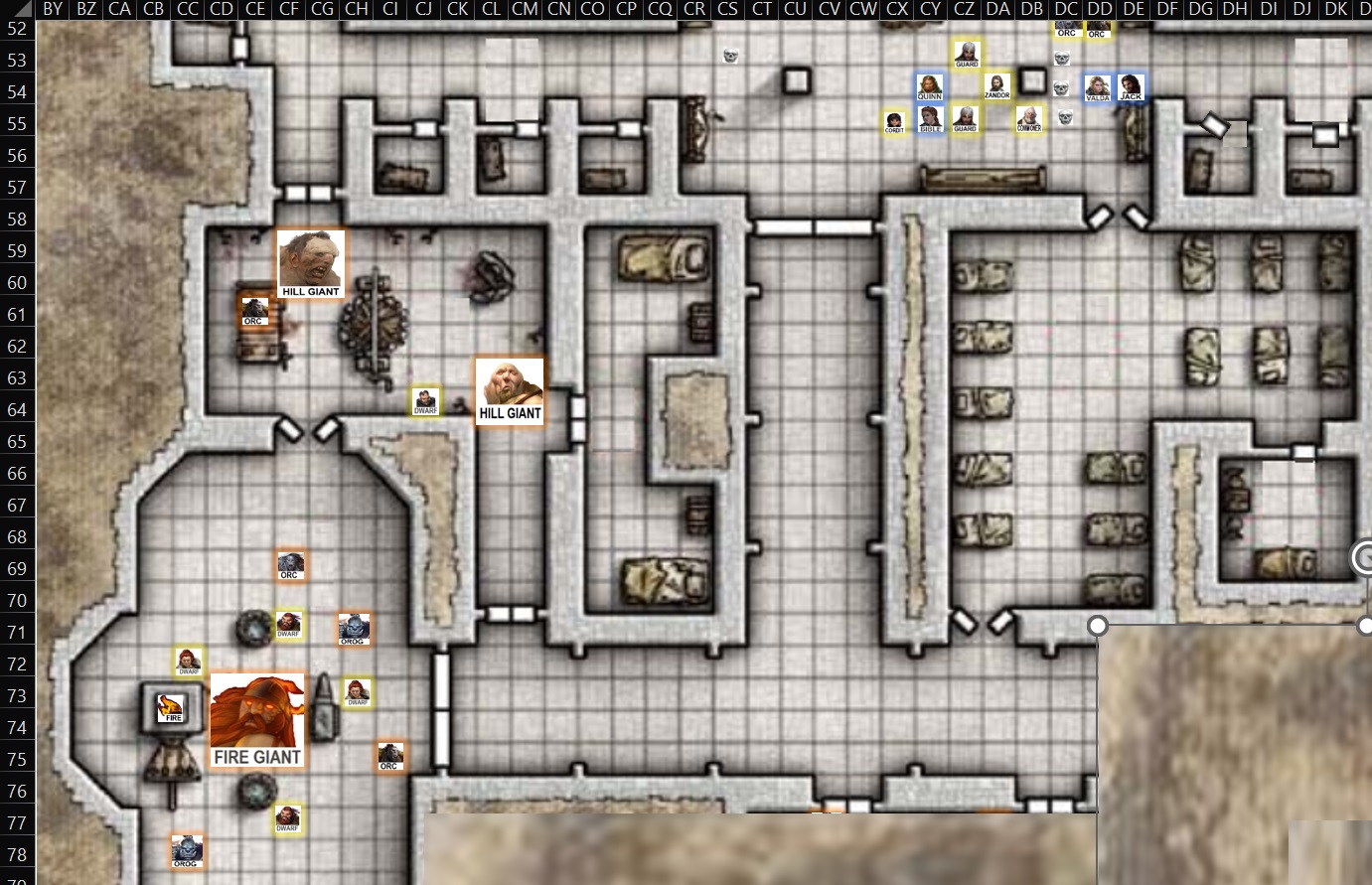 ~<I don't have much left, but I can polymorph one of us. It will last a full hour, and regardless of the beating that form takes, you will be as you are now when it ends. Valda, I see you are hurt some - would you like to be a fire-giant sized ape when we go in? I can only do one at a time, but I could do someone else.>~

~<Also I can give each of you the fey certitude again - both a few moments fleet of foot dancing around any blows plus some fortitude and vim. Perhaps that would be a good start to get us into position when the doors open and protect us some as well.>~

Cordit, when she heard about the option of being a giant ape, will squeak, "Ooh ooh! Pick me! I'd sure like t'give 'em what-fer as a big ol'monkey! I promise t'run away if I feel like I'm a-changin' back to wee meself!"

Tamanar suggested, "Perhaps we should strike the torture-chamber and forge simultaneously. There could be danger to the dwarves if we strike the north first and Smith Smolderheart hears, or to the prisoners of the torturers, who are sure to notice if we start at the forge."
Last edited: Nov 10, 2022

Jack nods upon hearing the wise elf's words. "Was thinking the same. If we got a big ape, maybe it and a couple o' others strike the forge through the double doors while another group attacks the torture chamber from the north - just like we handled the barracks upstairs."

Eoghan nods seriously at the halfling.

"Very well, erm, Cordit. A giant ape you shall be.

"As soon as we are in position I shall sign the dweomer."

~Are the orcs with us? For this flanking plan, we need everyone we can get~

Jack looks over the group. "How about Bible, Corbit, Eoghan and the orcs take the forge doors, and Tennibor, Valda, Tamanar, the two guards and myself take the north doors to the torture chamber?"

Valda just nods as the others plan. She's not much of one for complicated thinking. After all, as the thieves guild always said, there needed to be both bosses and legbreakers, and Valda was comfortable staying in the latter.

"This also makes sure they can't run out the other exit for help. Jack, I like it. I'll tell people when the polymorph is done and then we can all burst through."

The seeming-orc takes on a contemplative look that does not match his magical disguise before adding, "If we have any healing, I think Bible and Valda may need some."

Tamanar did not ask for healing, but it was obvious to all that he was not in top form. Equally, all the prisoners were weak from their ordeal. Any of them who planned to join in the raid would benefit from a spell or two.