JustinCase said:
Many of my spells specify I must be able to see the target. Does the magical sight from Arcane Eye make it possible to cast a spell indoors while I am outside? And if so, how does that interact with my concentration, because both spells (I'm thinking about casting Hold Monster) take up concentration? Does it seamlessly go from one to the other, or does the first expire while casting the second spell?
Click to expand...

Steve Gorak said:
FYI, I'm waiting for some of the melee characters to post their positions, Gimlack will say 10 ft from them
Click to expand...

Kaligan marvels at the growth of the tree and the illusion added to it. Truly there are many wonders in the world. He waits near the entrance to the East Wing Door.

Steve Gorak said:
Would silvery barbs work? If so, Gimlak casts it.
Click to expand...

Maxperson said:
REMINDER to everyone that Duvrael can use his reaction to make anyone (friend or foe) use a Portent roll (a 4 and a 17)
Click to expand...

A plan was made, whispered in the dark, damp night air in the steading courtyard. It hinged on Duvrael, and the wizard was determined to show his superior skills. He sent his snake through the same hole in the door that he had sent his floating eye. The eye had been invisible, but the snake was not. The hill giant guard noticed it, but was slow to react.

As the giant hefted his club, intent on bashing the serpentine intruder, Duvrael cast his spell. The giant resisted in just the way Duvrael had predicted it would, and the wizard's spell twisted at just the right moment, slipping through the giant's meagre will. The giant stiffened and dropped his club, which landed on the floor without making a sound. For the Colonel had asked the night air to carry all sound away - out the door and up into the sky, where only the clouds could hear it.

Duvrael nodded and Kaligan heaved the great doors open. The doors were designed to be barred, but they had not used it: the oaken cross-bar hung from a ring on the wall to the right.

The door had opened silently and the guard stood immobilized. A great room stood before them with a low-burning fire in a vast fireplace. Braziers hung from the blackened rafters, but only a few held burning coals.

The room was very nearly dark, but movement in the light of the fireplace showed a young male hill-giant, pissing into a chamber pot. Around him were a dozen beds, occupied by what could only be more young hill giants. 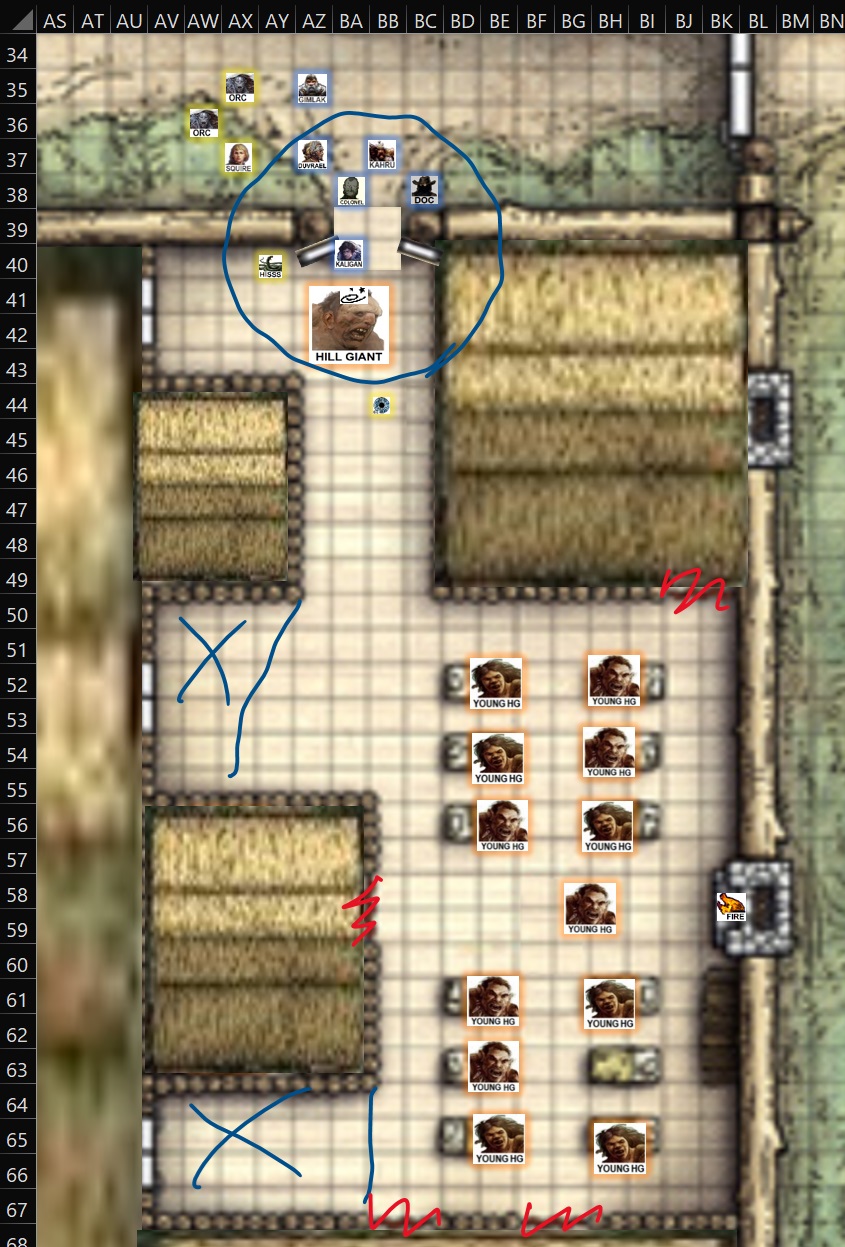 Concentrating on the spell that holds the hill giant guard fast, Duvrael peers into the dark room. He opens his mouth to warn the others, but no sounds come out.

Of course. The magical silence.

Instead, he places his finger to his lips and makes eye contact with each ally in turn. Then the yuan ti wizard turns and moves towards the frozen giant. Standing on his toes, Duvrael looks into the brute's eyes, not saying a word (not that he could) but clearly indicating that the giant's current situation is his doing. Since the spell prevents even blinking, it cannot miss the wizard's tongue, split like a snake, as it licks at the air in front of him, and disappearing almost instantly.

Duvrael grins, certain that he has made an impression.

Silence
Pulling his great sword, Kahru readied himself to push through the silent door intending to plunge his blade in to the frazzled giants spine. His attack though was stayed by the wizards hush and with a frown the barbarian paused, allowing Duvrael to enact his own plan - was the little wizard trying to intimidate a giant?!

Kobold Stew said:
How high is the ceiling inside, please?
Click to expand...

Though the giant guard could not move to show any reaction, Duvrael could see fear in his eyes. Of course, fear of (and even respect for) one's enemy did not mean compliance, and the giant struggled to regain his freedom.

Kalagin seeing the danger that the young giant poses, focuses his will and all the telekinetic energy he can muster on the young giant and attempts to lift it into the air and pull it back to the where the group's warriors are waiting.