Maxperson said:
I am using my psionic Telekinesis spell
Click to expand...

Kaligan lifted the young giant and carried him over one of the beds and toward the group. The giant struggled in vain as his feet left the floor. He tried to flip himself around to grab at a bed, but Kaligan lifted him higher. His mouth was agape, and he may have been yelling, but it was hard to tell from the area of silence if he was being loud.

Gimlak silently stares down the room, readying his mind should the young giants move.

The shadowy forms of the young giants in their bed began to stir. It was a cascade effect - first a young giantess in a bed that the young giant had floated over sat up. Then she opened her mouth and one nearby her rolled over. Soon more of the beds were moving under their heavy fur blankets.

In addition, a full-grown hill giant suddenly appeared from the unseen middle hallway. She was standing, wearing a leather vest, and carrying a club.

Silently, Gimlak stares down the hall. The giants where he is looking at suddenly grab their heads in pain.

Steve Gorak said:
The goal is to get at least 6 young giants plus the full grown one that just came out.
Click to expand...

‘Stealth just isnt our thing’ Kahru muses as he thrusts his sword into the giant guards back. the waking of the sleepers by their brother flailing around in the air having all but forestalled Duvraels intimidation idea or their plan of getting the giant kings head while he still slept.

Oh well, the druid zealot could only pray that this lot didnt get them all killed.

As the young giant floated toward them, Gimlak let loose a psychic blast that caused a few of the waking giant youths to flail about in their beds. The giantess who had just appeared around the corner crossed her eyes and appeared to have the world's worst headache.

The element of surprise was quickly being lost, so Kahru thrust his big sword into the back of the stunned giant guard, but with fat and bone, it did not penetrate as deeply as the northman would have preferred.

To make matters worse, yet another giant appeared from around a corner to the south, also carrying a club and wearing animal furs. More of the youths began to climb out of their beds in an excited rush.

As chaos breaks out, and the giants begin to wake, the colonel mouths an expletive that cannot be heard through his own silence spell.

He approaches the held giant, lets the Silence dissipate, and holds out both hands, either side of the paralyzed figure. An arc of lightning courses between his hands.

Grunting derisively at his critiful stab, Kahru steps back to allow the grey Colonel to do his worst. He looks back to the orcs and seeing that everyone has come inside signals them to close the door…

Tonguez said:
Once everyone is inside, the orcs shut the door and take their chance to stab the frazzled giant too.
Click to expand...

Donnell followed the Colonel in and around the held giant on the right. He felt odd putting his sword into a defenseless creature, but it was a giant, and he did not want to be on the bashing end of its enormous club. The Colonel sent a course of electricity from his hands through the giant's body.

The orcs had brought the largest knives from the kitchen that they could handle. They were ready to attack their former captors when the time came. For now, they stood by the doors, ready to close them when there was room to do so.

Doc walked through the doors. Reckon these boys can use some help with putting this dog down.

He placed his pistol on the held giant's fat belly and squeezed the trigger. The eerie noise that it usually made was lost in the silence spell. He squeezed again and the gun jammed. It was as if it objected to being fired without being able to howl in pain. 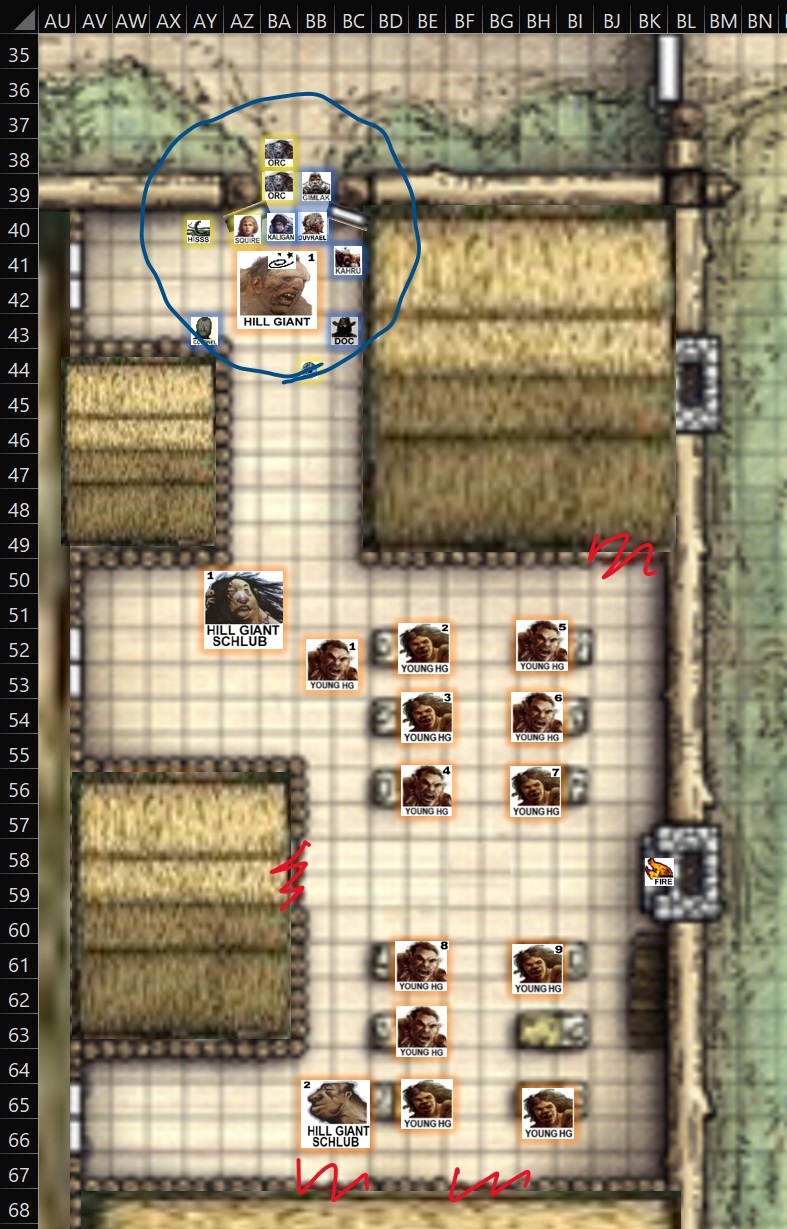 Seeing the start of his plan fall apart, Duvrael mutters a curse. With the magical silence lifted, he hears himself and realizes he now has the ability to cast every spell he knows, verbal components or not.

He grins as he takes a few steps around the immobilized giant, taking a bit of guano and sulphur from his pouch again and starts casting.

A tiny mote of fire erupts from his outstretched finger, and it moves quickly through the hallway. As it reaches the young giant in the first bed, the mote explodes into a huge ball of flame, even bigger than the one in the kitchen.

"I will divide the opponents into bitesized portions as soon as someone kills the doorman," he says to his companions.

The barbarian-druid had to grin when the wizard mentioned dividing the giants into bite-sized portions, his grin soon expanding into the maw of a great white bear as he chomped down on the doorman…