Gimlak moves with Kahru and when outside, he telekinetically lifts a stone and drops it to create a distraction. He then helps kahru with the gates, as silently as he can.

Gimlak's attempted distraction did very little - the wolves looked in the direction of the sound, and then back to what they had been doing before, which was, one was following Kahru, while two more were following that one. The fourth, smallest wolf, had grown some interest in the Colonel and had moved toward him, growling.

Though Gimlak had managed to open the north-gate, Kahru was having trouble getting the wolves to run out it - they seemed reluctant to leave.

The others had carefully crossed the courtyard, hugging the southern end. The two orcs followed, still more prisoners than allies. 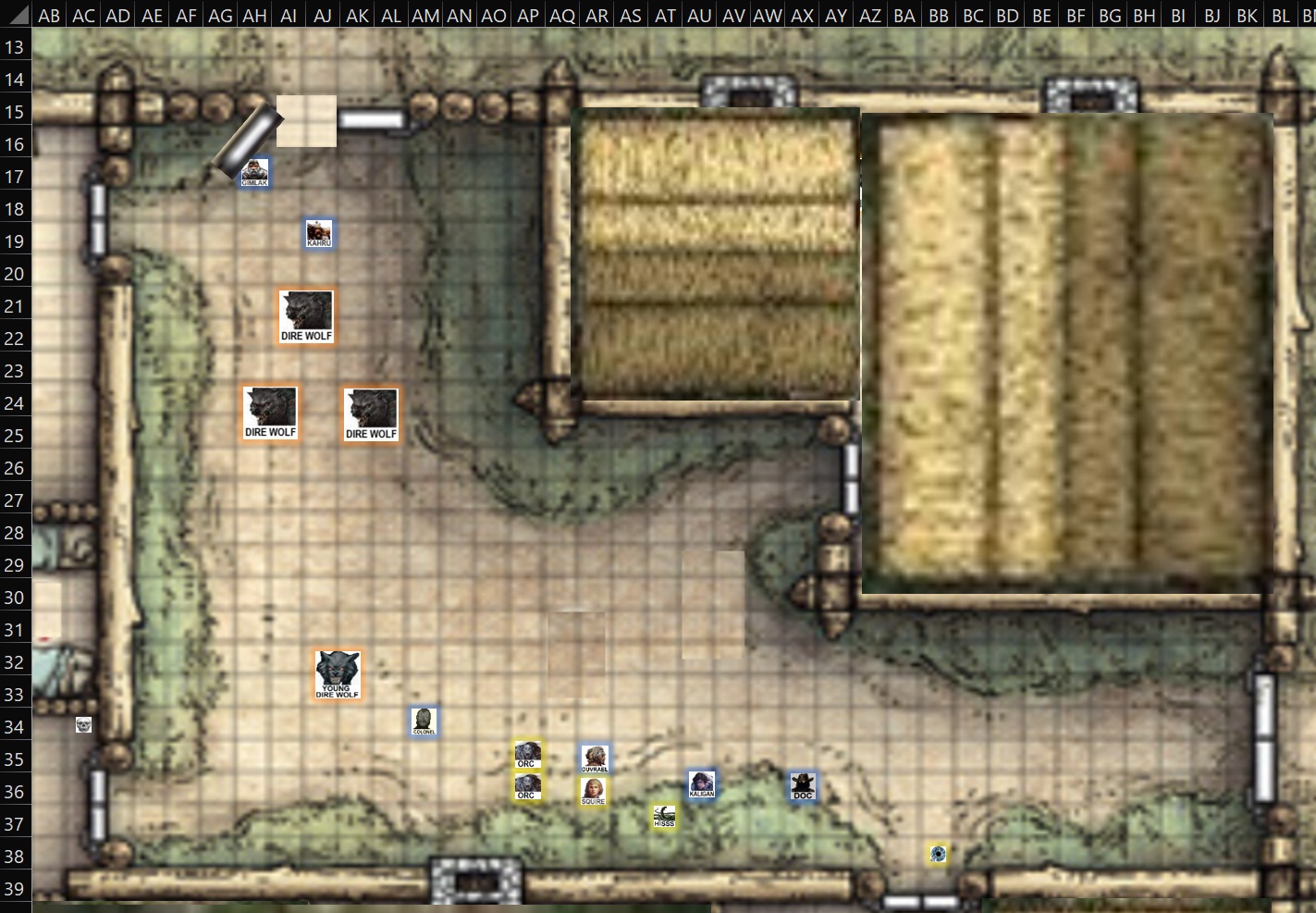 throughout the interaction Kahru kept his eyes on the three wolves, assessing their stance and behaviour, where there eyes focussed and if their signs showed aggression, caution, calm, fear or friendliness.

the wolves seemed relunctant to leave, could the druid tell by their movements just what was holding them back

It was his lucky day.

The Colonel hissed quietly and stopped the small wolf in its tracks. The two stared at each other before the dire wolf liiked away, and slunk off.

It was fear of punishment that was holding the dire wolves from leaving the compound. Kahru could tell that they had been raised by the whip with a cruel hand. When the Colonel managed to out-alpha the curious youth, it rejoined the others. Reluctantly, but with slowly increasing boldness, they moved toward the exit. Gimlak stayed still by the gate, out of their way while Kahru reasured them.

They slowly headed for the gate, looking about nervously. As soon as they were through, they set out at a run, heading off into the misty darkness of the surrounding hills, where they bayed one long howl of freedom.

Kahru watched as the dire wolves fled towards freedom, and in his core he felt the urge to run with them, back into the wild. As the pack disappeared into the night Kahru glanced at Gimlak and gave him a nod of thanks then turned back to the Steading of the Hill Giant Chief. A cruel hand had been restraining the wolves, beating them in to submission and the barbarian druid now had a new mission: to repay such cruelty in kind.

”Cover me Gimlak” he asked before making a dash back towards the outbuildings door - perhaps he could find the pack in the hills after the companions had taken the giant kings head.

Doc watches the antics with the large wolves with studied bemusement, while moving into position by the door.

Done with the wolves, Kahru moved to the door to the outbuilding and planted his staff in the dirt in front of the door. The staff grew roots, and then branches that reached toward the night sky. It grew until it stood thirty feet tall, its branches hanging over the outbuilding's rooftop.

When that was done, it seemed time to try the east-wing door.

Having raised his tree, Kahru stood back and looked at his handiwork. A few things stood out as not quite to his satisfaction: 1) As it turned out, the outbuilding's doors opened inward. 2) The tree's trunk was only three feet wide (though the lower branches also obscured the doorway), while the doors were ten feet wide. A giant might struggle to get past, but it was not impossible. A smaller creature could do so without much trouble. 3) Finally, he wondered what would happen to his staff if a giant were to knock the tree down (or worse, chop it down).

Seeing Kahru's frown at his magical tree, Duvrael takes a bit of fleece from his pouch and waves it in a slowly smaller circle at the door. Wicked looking barbs, shining with what can only be painful venom, appear up and down the whole trunk of the tree.

"Just an illusion," he explains, "But it may slow them down long enough."

Having made the tree appear fiendish with barbs, Duvrael turned his attention to the door. After a moment's searching, he found a hole big enough to send his eye (and, if he decided, his snake familiar) through. Inside was a dimly-lit hallway that led to a large dark chamber. Immediately behind the door stood a hill giant, standing guard. To the right was a set of doors that led further into the steading. They eye would have to move past the giant to see further into the large chamber at the end of the short hallway.

Kahru stood back and suveyed his handiwork which was further enhanced by Duvraels pointed illusion, the tree trunk did not fill the whole of the giant-accomodating doorway but it should slow down anyone inside long enough for the companions to sneak inside the east door and catch the Chief still sleeping.
He had considered what might happen if someone tried to chop the tree down, but he had faith that with stealth, luck and favour the company would get to the giant chief and back before the Outbuildings inmates were even aroused.

the priority now though was getting inside the eastside door …

"There's a giant standing guard, just inside," Duvrael reports his findings to the others.

"I may be able to magically constrain it, although I've never attempted to do so from the other side of a closed door. In any case, we need a solution to it potentially raising an alarm."

The Colonel, standing by the door, gestures to the others, with a finger to his lips and the shrug of a question: "Do we want silence?"