Chrysagon shrugged at Myrral's comments and picked up the amulet and the cloak pins from the top of the sarcophagus.

Yassah was slightly uncomfortable with the actions of some of the others but remained silent and alert for any unusual activity from either the statues or the hole in the wall.

OOC: Yassah will scan the room including the walls, statues, and sarcophagus. Perception

Yassah began to scan the room with the broodguard following, but he did not get far before Chrysagon took the items off the top of the sarcophagus. As the paladin did so, four things occurred at once:

1) The chains fell off of the zombies (who were no longer turned), and the heavy iron door began to slide closed as they shambled toward the closest living thing (which was Qawasha, to his dismay).

2) The image of a hunter that was carved into the bronze shield on the south wall began to animate, and it produced a javelin made from magical energies and flung it at Dellrak, who had been holding his crossbow and watching Myrral climb the wall. The dwarf spun in time to see the hunter animate, but not in time to dodge, and he was thrown backward off his feet by the force of the blow.

3) Each of the six pots of bones dislodged a skeleton, who clambered over the lip of the pot and began to stride across the floor, reaching out toward anyone nearby.

4) Chrysaon was forced to his knees, holding the amulet out before himself with wide eyes in some sort of distress.


In a flash, shadows shifted across the walls, forming into the outline of a long-legged bird. Its beak stabbed Chrysagon, forcing him to his knees as a voice echoed in his mind: “You will do as I command!”. OOC: Chrys must roll a dc16 CHA save. If he makes it, he can force himself to his feet & expel Papazotl's spirit. Otherwise the Elbis will occupy his body (& I will tell you more.) 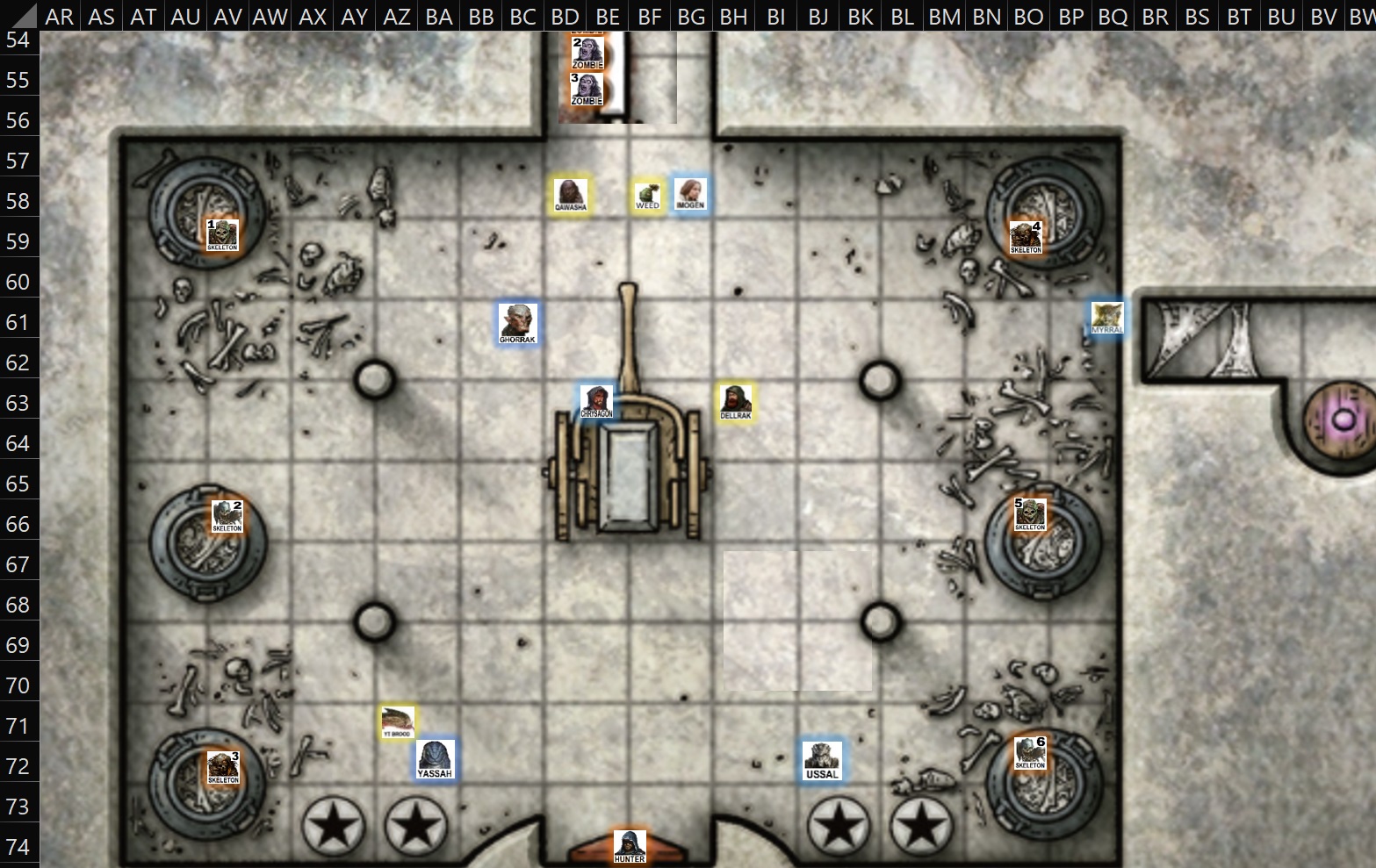 
"You!" He addressed the Broodguard, "Go attack that ssskeleton over there!" he ordered while pointing to skeleton #2.

"I will take thisss one here." Yassah pointed towards the 3rd skeleton.

Yassah moved to the 3rd skeleton and swung mightily with his scimitar.

Myrral quickly looks the setup over checking overly quickly for traps before swiping the bottle and taking full run out, barely keeping himself on the wall as he throws himself away from the table holding the bottle in his mouth securely behind the fangs.

Hordes of undead were never good, but Ghorrak was glad to have a clear course of action again. Long years of painful training had conditioned him to always protect his wizard. Qawasha was close enough, so he moved to interpose himself between the druid and zombies. His lunged with his greatsword in cleaving arcs hoping to force the zombies back then dropped back and held it ready to ward off any attacks

Supporter
From where she is standing, Miss Imogen draws an arrow and releases it into one of the zombies. Thunk.

Standing proudly beside her, little Kapalue, Weed, releases a sling bullet which flies into the nearest zombie. If it falls, he will let out a triumphant squee, proud of his kill.

Chrysagon staggered under the command of the trickster god Papazotl. He forcefully pushed the god away and rose to his feet. I will not do as you command, he shouted. The spirit figure left him alone, and Chrysagon felt an emptiness within. I wonder if I made a mistake, he thought.
Chrysagon focused on the fight that had erupted around him. He raced up to the nearest skeleton that emerged from the vat, holding with both hands his new-found staff in front of himself.

Yassah sent his broodguard after a skeleton, and lunged at another with his sword. The skeleton was fast, and the sword glanced harmlessly off its arm bone as the skeleton reached out, sending a short-range wave of necrotic energy from its claws that tarnished the metal of Yassah's weapon and cracked his skin.

The broodguard bit its own skeleton, who clawed at it in return, leaving blackened burns. Ussal also engaged a skeleton, while suggesting to the others that this was likely not the best approach. The skeleton was thrown back from the rim of the urn by Ussal's psychic attack, but it recovered and came at him, claws-out.

Myrral ducked into the high hidden hallway, and he liberated the softly glowing bottle. From inside, a voice called to him in a muffled gravelly tone and a language that he couldn't understand. As he popped back out of the hole near the ceiling and crawled along the wall, he could feel something tapping on the glass of the bottle in his mouth.

Imogen shot down the first zombie as it lumbered toward Ghorrak, who had stepped between it and Qawasha (who was happy to step back). Ghorrak forced the second one back with his sword, and Weed struck it in the head with a sling-stone. The thing fell into a pile with the first, and Weed let out a celebratory squeak. The third zombie climbed over the first two, and it managed to get its teeth on the orc's arm, biting into the flesh.

Dellrak, who had been hit hard by the hunter's javelin, dragged himself to his feet, swearing. A skeleton was shuffling toward him, and the hunter on the bronze shield was readying another javelin. He attempted to put the skeleton between himself and the shield, but too late - the javelin struck him and he stumbled, only just managing to keep his feet.

The last skeleton rushed toward Imogen, and the urns began to churn out another batch of skeletons. 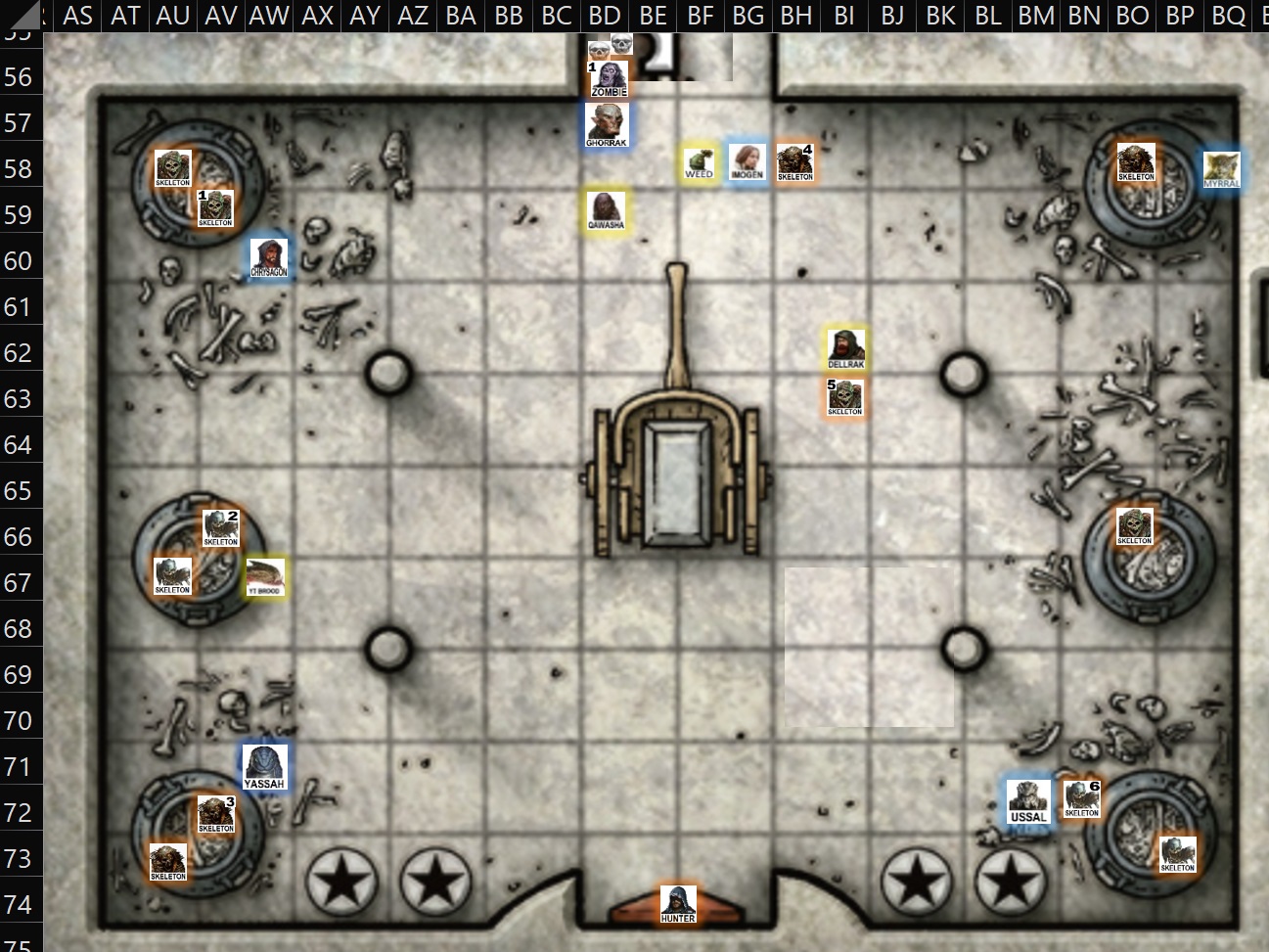 Supporter
The skeleton approaches, and Miss Imogen hesitates from drawing another arrow from her quiver. The creature is right before her, its bare teeth grinning at her through a horrid rictus.

"Is there any richness in those dry bones of yous?" she asks, as her fist closes, and all moisture, what little of it there is, is suddenly frozen within the creatures skull.

As she does so, tiny Kapalue gains confidence and runs up beside her, clawing at the creature's shin and causing it to stumble.

The skeleton managed to scratch Chrysagon on the arm. Another skeleton crawled out of the glass cauldron and he saw that they also came out of the other cauldron to his left. it looked like it was still plenty of bones in there for more skeletons. This is not good, he thought to himself as he jostled with the skeleton in front of him. Let's see if I can break the glass, it doesn't look particular sturdy.
Holding the staff with both hands, Chrysagon took a swing at the cauldron. When staff connected with the glass, he hoped that it would break. Either way, he would swing again at the cauldron or skeleton.

The Yuan-ti hissed and drew his 2nd scimitar. With rapid swings he attacked the skeleton. He hoped to down this one even though there was another coming out of the urn.

Myrral stopped and took out the flask out of his mouth to check the knocking, but only shoved it into his pouch as he saw the fight breaking out.
The shaman focused on the spear-chucking statue. Thinking it had to be magic to do that, he dispels magic on it. But of course, the owner, the creator of these things was an ancient and powerful lich. What could he do?

Ussal looks behind and observes another spear hitting their ranger. Sighing, he flings the skeleton away from himself and moves into better position. After that he quickly mixes few of the vials he has on himself, creating a bubbling, hissing mixture that after couple of seconds of fizzling explodes toward the hunter and the wall.

It is protected by years of neglect so only minor pitting can be seen in the dust covering, but the acid keeps at it.

Ghorrak roared at the zombie as he swung again trying to finish it off. The pain threw his first swing off but the second one connected.

Chrysagon moves as in slow motion. He swipes the glass cauldron over and over but as soon as it smashes into smithereens, it comes together again. Chrysagon hits it again and again... it's like he is in a time loop and not able to move forward.