Chrysagon slammed at the urn with his new staff until it cracked, split, and shattered, spilling twitching bones onto the floor. The bones shook and shuffled, as if they were trying to form a skeleton, but they were too scattered to do it. The two skeletons that had emerged before the urn was smashed lunged at the paladin, and one scratched him while he fought off the other.

Imogen attempted to freeze a skeleton's head, but it was far too dry and only a small amount of frost grew on it before Weed moved in, clawing at its legs with his newly grown claws. Another skeleton lumbered out of its urn and clawed at the vegepygmy, who danced to the side. Ghorrak hacked at the remaining zombie with his big sword, and it got lodged in the thing's shoulder. As the zombie reached out for him, Qawasha planted his gnarled staff, and lightning burst out, raining down on the zombie and Imogen's skeleton, and both undead burst and fell.

Dellrak struggled with his opponent, who was joined by another. The dwarf hacked one with his axe and managed to hold off the other, and he watched past them as the Hunter prepared another javelin to throw at him. To his relief, the javelin fizzled in the air, as Myrral tried to disrupt the magic that animated the hunter. While he could not hope to beat the powerful magic of Acererak, he was able to best the relatively weaker magic that manifested the javelin itself. At least, this once, as the hunter began to manifest another javelin.

Ussal threw off his skeletal opponents and threw a caustic brew at the bronze shield that bore the hunter. While there was a layer of grime that the acid needed to burn through to begin to bore into the bronze, small pits began to form in the metal. It was working. The skeletons chased him, but he was able to fight them off.

To make matters worse, the five urns that were still intact burst forth another skeleton, who began to climb out to join the others in an overwhelming rush. 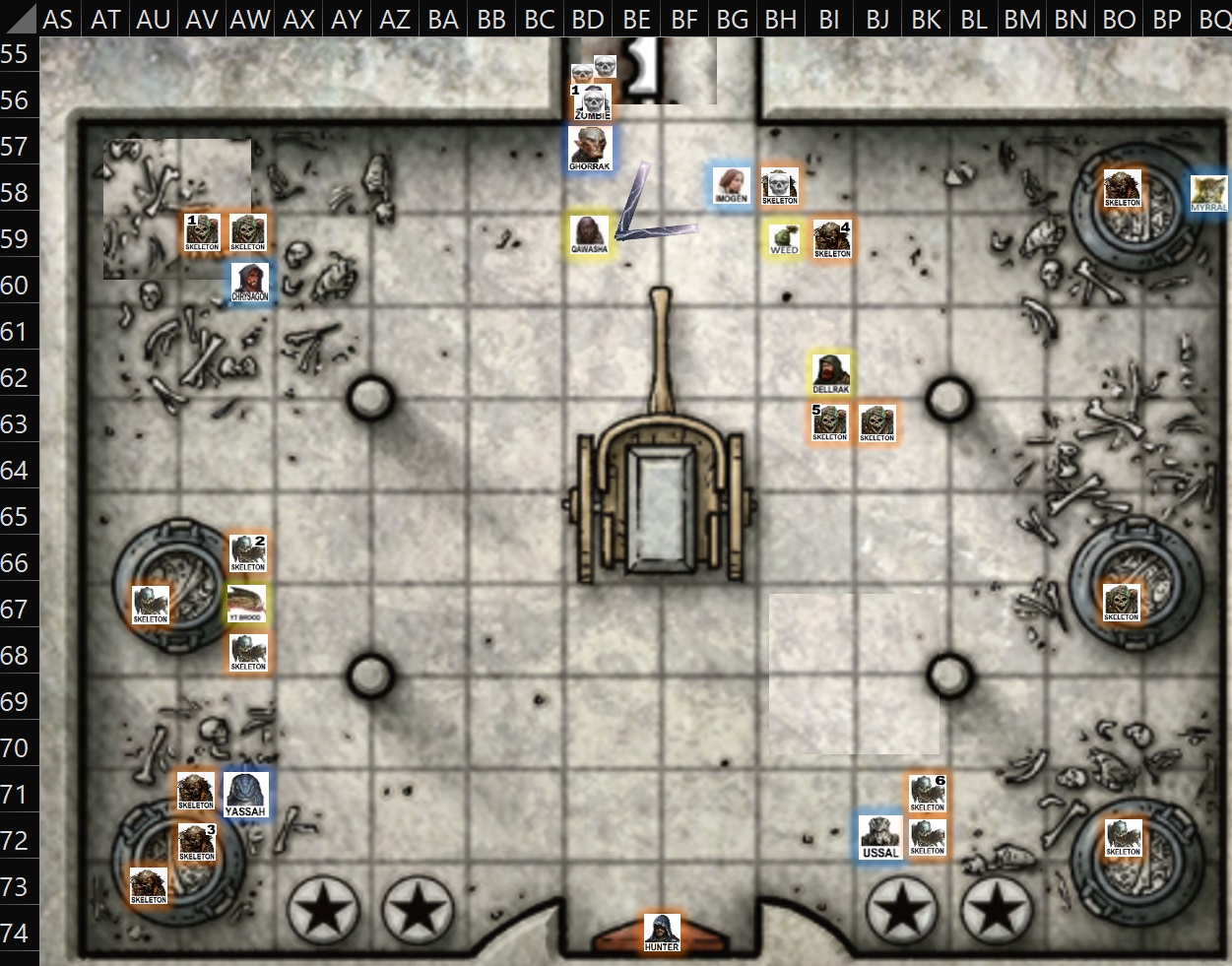 Supporter
Miss Imogen sees the damage done by the wyrd Hunter in the shield, and fires an arrow at it.

The arrow hits, or appears to, and the shield resounds, like the gong that would call the girls to supper at Miss Enna's Academy. Her first arrow away, she turns and engages with the skeleton harrassing Kapalue. she barley misses, but the arrow catches on the rags the creature still wears, and the force drags it to the ground where it shatters into dust.

"Weed, behind me!" she calls, but the little vegepygmy instead steps over the skeleton that had just fallen and releases a sling bullet towards a skeleton in the corner. The stone misses, the vegepygmy squeaks, and runs to the protective cover of Miss Imogen's skirts, where it seems to disappear amidst the shadows against the wall.

"Let usss sseee if he is a creature or not." hisses Ussal as he rapid-fires words of a spell.

Muted booming thunder resonates around the room, dust falling from the crevices as the spell shatters minor rubble around the shield and resonates weakly in the wall, absorbed once again by the layers of dust and cobwebs.

Hissing in annoyance, he activates one of the crystals in his armor and the force field surrounding him hums back to full strength.

Pleased to see that no new skeletons emerged from the smashed glass cauldron, Chrysagon calls out to the others to to the same. Break those cauldrons. That will stop new skeletons coming forth!
Next, he took a swing against the two skeletons. They looked fragile and the staff, to his surprise, was very powerful. Even so, the first skeleton dodged the strike but the second skeleton was not so agile. The bones rattled from the blow and a ball of pure energy emerged from the staff that ripped away even more undead life force.

Are these skeleton also vulnerable to bludgeoning damage, like normal skeletons?

Heeding the new information from his teammate, Yassah switched tactics and ignored the skeleton.
"Broodguard! Break the cauldron!" he ordered as he attacked the one closest to him.

2 weapon attack on cauldron with scimitars.

Myrral is a bit at a loss what he can do against mindless undead and constructs. He comes a bit down on the wall and drops his weighted net over the skeleton under him.

He then scampers closer to Delrack, but still keeping on the wall, out of easy reach of the skeletons.

Imogen's arrow clanged off of the bronze shield, leaving only the barest scratch. Disappointed, she shot a nearby skeleton through its eye-socket, and the skull shattered. Bones fell to the ground as Weed danced past it, slung a stone that pinged off the wall, and then hid under Imogen's skirts.

Myrral dropped his net on the skeleton that Weed had missed, and shuffled off down the wall, while Chrysagon smashed a skeleton with his newfound staff. The paladin called out to the others to break the cauldrons, and Yassah slashed at one with his scimitars. His first blow left a scratch, and his second a crack, but the swords were not the best thing for the job. The broodguard, ignoring his own safety, leaped on the side of his cauldron and began to bite and pull at the side. Eventually, the structure gave, and glass and bones fell to the ground as the cauldron burst.

Ussal tried to destroy the bronze shield with a destructive spell, but the metal shook with a ringing noise while the hunter seemed unbothered. The image on the bronze shield took aim, and another arrow sped out and struck Dellrak.

"Och." said the dwarf as he staggered back, then suddenly his eyes widened as if he felt a strange sensation. His colour went ash-gray as he fell apart, leaving only a pile of dust where their friend once stood.

Ghorrak ignored the hunter and the larger question of how to survive, heading toward the cauldron in the corner and trying to smash it with his greatsword.

Ghorukk dashed across the floor and swung his greatsword at a cauldron with a loud clang. It cracked, but still skeletons climbed out. One took a swipe at him, but Ghorukk blocked the claws with his sword's guard.

With Dellrak gone, a small crowd of skeletons were moving toward Imogen and Weed. Qawasha would not have it, and he spun his gnarled staff in circles and the ground burst forth with writhing roots that wrapped the legs of the skeletons and stopped their advance - for now.

Around the room, the unbroken cauldrons disgorged skeletons, and the yuan-ti struggled with groups of them, getting scratches and necrotic burn-welts. 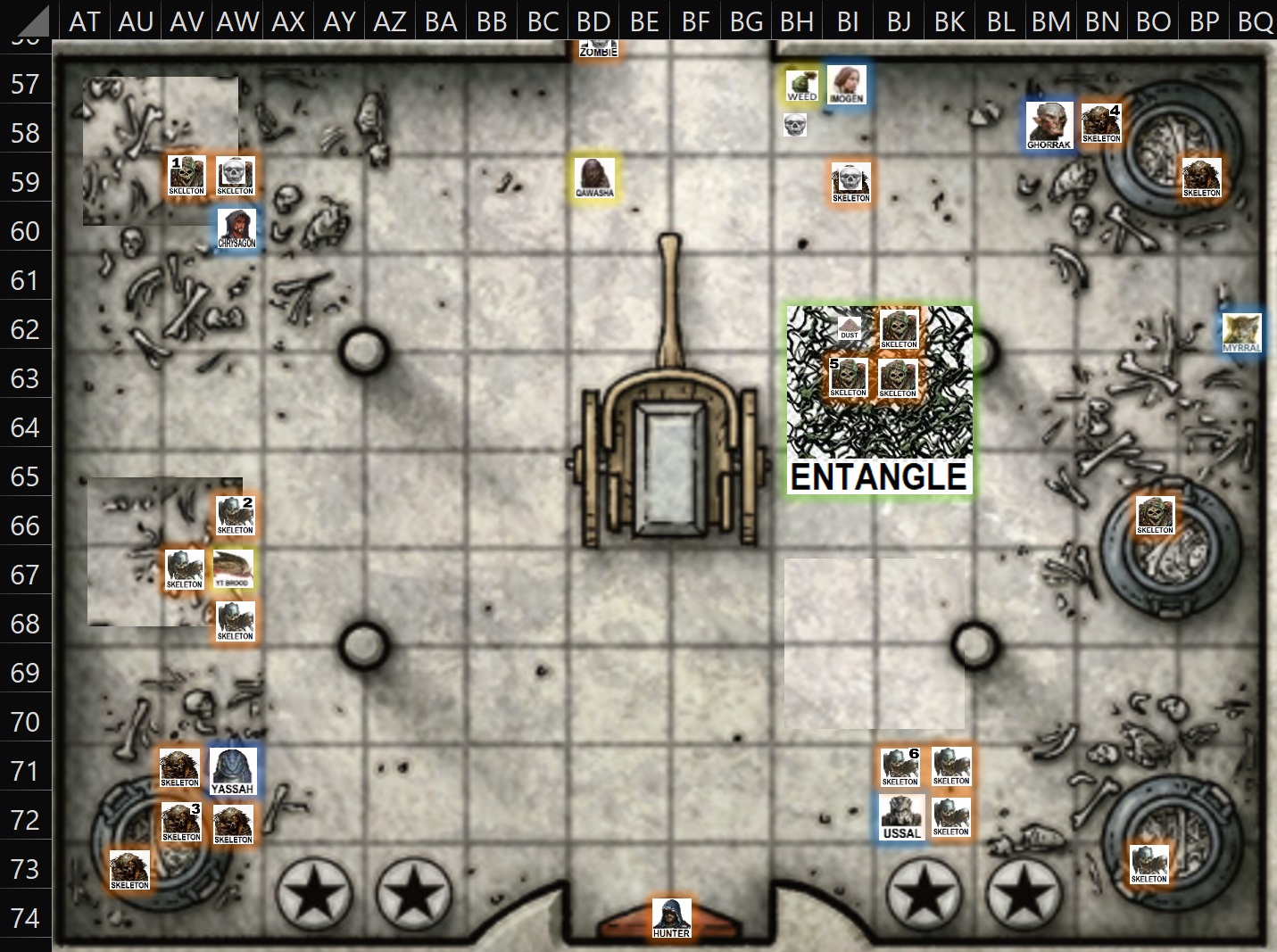 Ghorrak kicked the cauldron right where it was cracked, and the glass shattered, sending bones scattering across the floor. The orc spun, and struck a skeleton with his sword as it stumbled over the debris. The other skeleton tore its way out of Myrral's net, scratching itself up in the process.

Suddenly realizing how injured he was, he did his best to shrug it off and continue his assault on the cauldron.

Yassah and his broodguard were struggling in the south-west corner. The malison slashed at the cauldron once more, and scored a scar into its glasswork, but still the structure held. Another skeleton climbed out, and he became surrounded. They reached out with grasping claws and they pulled Yassah down, scratching necrotising welts into his snake-like skin.

The broodguard hissed and ferociously clawed and bit at three skeletons, tearing the head from one of them. He kicked at another, and held it off, but the third scratched his back in three deep gooves.

"Thisss isss getting annoying!" Ussal hisses as he casts one thing he can that he knows will hit regardless of distractions.
He protects himself from the minor wounds of the skeletal opponents, but killing that statue is the priority.

"Shaman, get to Yassah!" he yells, adding as an afterthought "And ssee if you can sssave the broodguard too!"

The bronze shield shattered under Ussal's missiles. He was surrounded by skeletons, but their claws could not penetrate his protective carapace.

Supporter
Miss Imogen sees her comrade go down, as she aims an arrow at a cauldron. She is angry at herself that she let her companions continue this senseless treasure hunt rather than head for the completion of their quest, and her frustration throws off her aim. The arrow embeds itself in the wall, having missed.

Myrral flows over the terrain, even turning bones and slick stones and dust barely slowing him down. He skirted the entangled area and used the chariot as a bouncing board for a quick turn, he got close to the downed friendlies. But not close enough. Hopefully, they will survive few more seconds.

Imogen's arrow thumped into a wall as Myrral landed on all fours and scampered across the room, heading to rescue Yassah. Qawasha was also on his way, only stopping to fry a skeleton or two while they struggled to free themselves from his writhing vines. One was destroyed, while the two others escaped, with one taking a swing at Imogen as Weed danced away, cracking a stone off of its forehead.