Escella goes to the west and takes a look down the stairs.

"They shouldn't attack the guests and particularly elven guests. They are the defenders of the manor, but seem to be corrupted. We know there are red wizards about, what if they somehow infiltrated inside. We must hurry!"
Vairar follows the group down.

Tommi went north to the portal room, and Escella to the west stairs to the kitchen. “Check on Sir Darfin,” Angis told Escella. “Check the portals,” he told Tommi. “If the door’s locked, lemme know. I c’n open it. Give a whistle if there’s trouble.”

Angis went over to the body in the south stairs, kneeling down to check who it was and if they were beyond help.

Lionel follows Tommi. He knew that Titus were down here with Tommi earlier and now he was worried for his friend. If the guard was dead, what about Titus? Oh dear, oh dear, he muttered, this is not good!

Angis had little time to see who the second body belonged to before three sources of trouble occurred to him nearly simultaneously. Escella headed toward the kitchen. As soon as she reached the bottom of the stairs, she was seized by cold, clammy hands that began to choke her. She felt her shoulders go numb as shadowy arms reached around her from behind and she struggled to keep her feet on the ground.

Tommi and Lionel were heading toward the guardroom (and the portals-room beyond) when Tommi was similarly grabbed, only from below. Something had him by the waist and was slowly crushing him. Lionel could barely tell what was wrong with his friend, and in his haste to find Titus, he nearly passed him by before realizing that Tommi was in distress. ORB5 buzzed nearby them and began to squeal a warning sound.

Viarar had reached the bottom of the stairs, and though the others had nearly disappeared into the haze that clung to the various staircases, he could tell that they were in some kind of trouble.

Angis was vaguely aware of all of this, but he was also aware of a struggle around the corner in the southern cellars. Sound seemed to be muffled by the strange smoke-like fog (it appeared that all senses suffered under its cloying haze) but he could just make out a grunt and a thump, as if someone were defending themselves ahead of him in the cellars, as well as behind him at the other stairs. 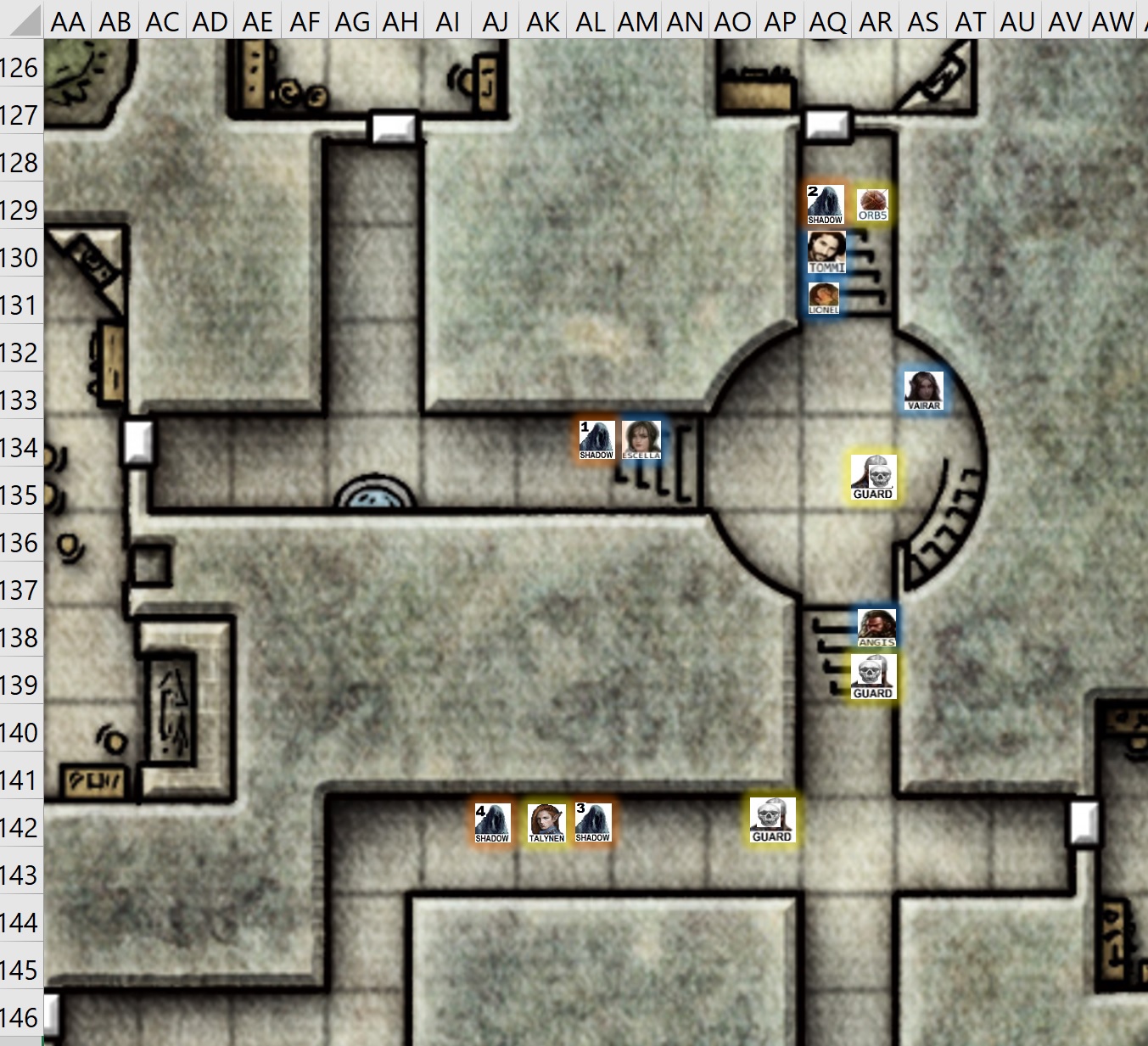 Vairar rushes straight behind Escella and at his word of power, golden radiance spills over her and catches the shadow in its blast.

Vairar's light was not as bright as the elf would hope, much of it was lost in the hazy fog. Still, the shadowy creature was illuminated for a moment, showing a roughly humanoid silhouette that shrieked a terrible cry and flew over Escella to grapple with Vairar.

Hearing the fight erupt nearby, Tallien breaths out in relief. Dodging around the monster blocking his path, he rushes back toward the crossing of the halls. Seeing a dwarven warrior he finds himself nonplussed, but still, allies are allies.

"Ho, there, help! Two shadows behind me!"

What's happening to you, Tommi? Lionel shrieked when he realised Tommi was struggling against a foe that was barely visible in the smoke. He stepped past Tommi with an outstretched hand and felt something, something that was slightly more substantial than the smoke around them. He hefted his sword against the creature that had Tommi in its grasp. The sword seem to connect and the creature flinched.

The muffled sounds of battle went two ways and Talynen shouted from down the cellar halls. Angis heard it, but it sounded like it was much further off, and he was suprised to see the elf appear through the cloying smoke not far from the bottom of the south stairs.

Escella tried to fire her eldtirch bolts in close proximity, but they disappeared in swirls into the dark fog. She staggered, wondering how the creature had made her legs feel so weak.

To the north, Lionel stabbed at the thing on Tommi and he felt his sword bite, as if the creature had solid mass somewhere hidden within its swirling shadows. Still, the thing clung to Tommi.

OOC: Can we see where the smoke is/begins? Or is it just everywhere and unavoidable?

Angis was torn as he heard fighting down the stairs and behind him. His friends were in trouble! He stared into the smoky darkness, trying to see the threat, but it was around the corner.

Then an elf ran into sight from around the corner.

"Ho, there, help! Two shadows behind me!" the elf yelled.

“An’ ‘oo are ye?” Angis asked, pulling his twin battleaxes. “Alroight, lad. Keep yer ‘ead on an’ we’ll get through this. Back it on up ‘ere an’ let’s get back t’ the central chamber where we c’n get some ‘elp.”

Angis took a step back a bit and readied a bit in case something attacked.

“Ever’one! Back t’ the central room! Dunnae try an’ fight alone!” he yelled to his companions.

Supporter
Lionel slides up beside Tommi, but as he does so, Tommi has already slipped away. Five minutes ago -- had it been that little? -- he had been facing death, and now he suddenly found himself hollowed out by the hungry, feasting thing. With Orb5 providing distraction, a quick underhand stone and a half swing from Tommi's sling sends one of his magic stones at the dark and imprecise form. As he tries to load it, he drops the pebble and hears it scatter across the basalt flooring.

Angis called for a fallback and he swung his axe through a mass of swirling smoke, which turned out to not be one of the shadows. Talynen began to follow, but he was surrounded by two of the creatures, who appeared out of nowhere and attempted to bring him down. The elf managed to fend them off

Tommi danced back up the stairs as the shadow came for him. Lionel didn't want to be left alone there, but he tried to hold the shadow back. ORB5 stuck out a little metal arm and shocked the thing as it buzzed over its head, helping Lionel to see the humanoid form in the fog. 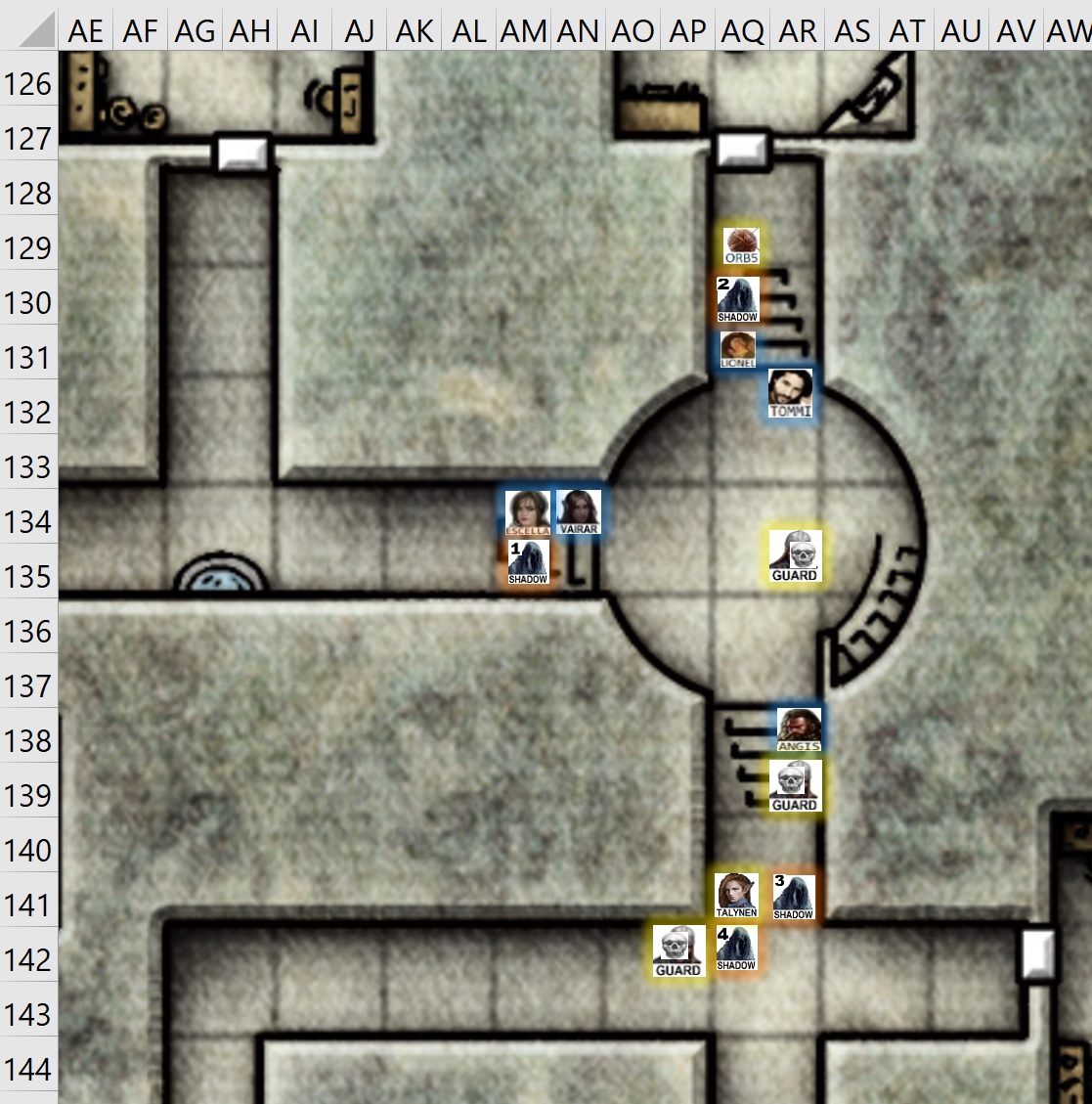 Escella finds her pack a bit heavier than before. She fires a couple edritch blasts into the shadow in front of her. Both strike true and the shadow dissipates. She wants to go forward to Lord Darfin but she retreats back up the stairs (to AQ135). "C'mon," she says to Vairar. "There's two of the right."

For the first time, Lionel saw the creature properly as an outline in the fog as it was shocked by ORB5. Lionel took advantage of the distraction and stabbed the shadowy creature in the guts. Satisfied that the creature was badly hurt, Lionel quickly moved back into the circular stair room and prepared himself for any possible attack.