Three ghost-like orcs emerged from the wall behind Titus.

"I wish I could tell you, Angis." Titus said, "But I don't really know what's going on. All I know is that I have to stop you from getting through here, while Shalendra finishes her ritual."

The conversation appeared to be over as the orc-ghosts and Titus rushed forward in the cramped quarters of the shrine-room.

"I don't know you, human. This group helped. You arrived with them and were a guest here and you betray that trust. Stand aside. Shalendra will be dealt with according to the elven ways. Stand down!"

Vairar advances, his spear ready to counter any attack.

OOC: if Titus doesn't move aside Vairar will attack.

Supporter
"Oh, Titus," says Tommi with pity in his eyes.

"You know we don't care about any of that. But you also know we have to stop you."

“Shalendra?” Angis frowned. “Wot’d ye dae t’ the girl?” the dwarf demanded. “Wot is she up tae?” He gripped his axes and prepared himself to meet the ghostly orcs.

Titus answered Lionel with a shamed look, "I believe that you would have."

He looked at the ground, and for a brief moment it looked like he might surrender. Then suddenly his fiery-eye burst brightly and he yelled, "Yeaaah!!"

And he pointed his sword at Viarar and a bolt of eldritch energy fired from it, striking the elf's shield with a bang that echoed loudly in the confined space of the underground shrine. 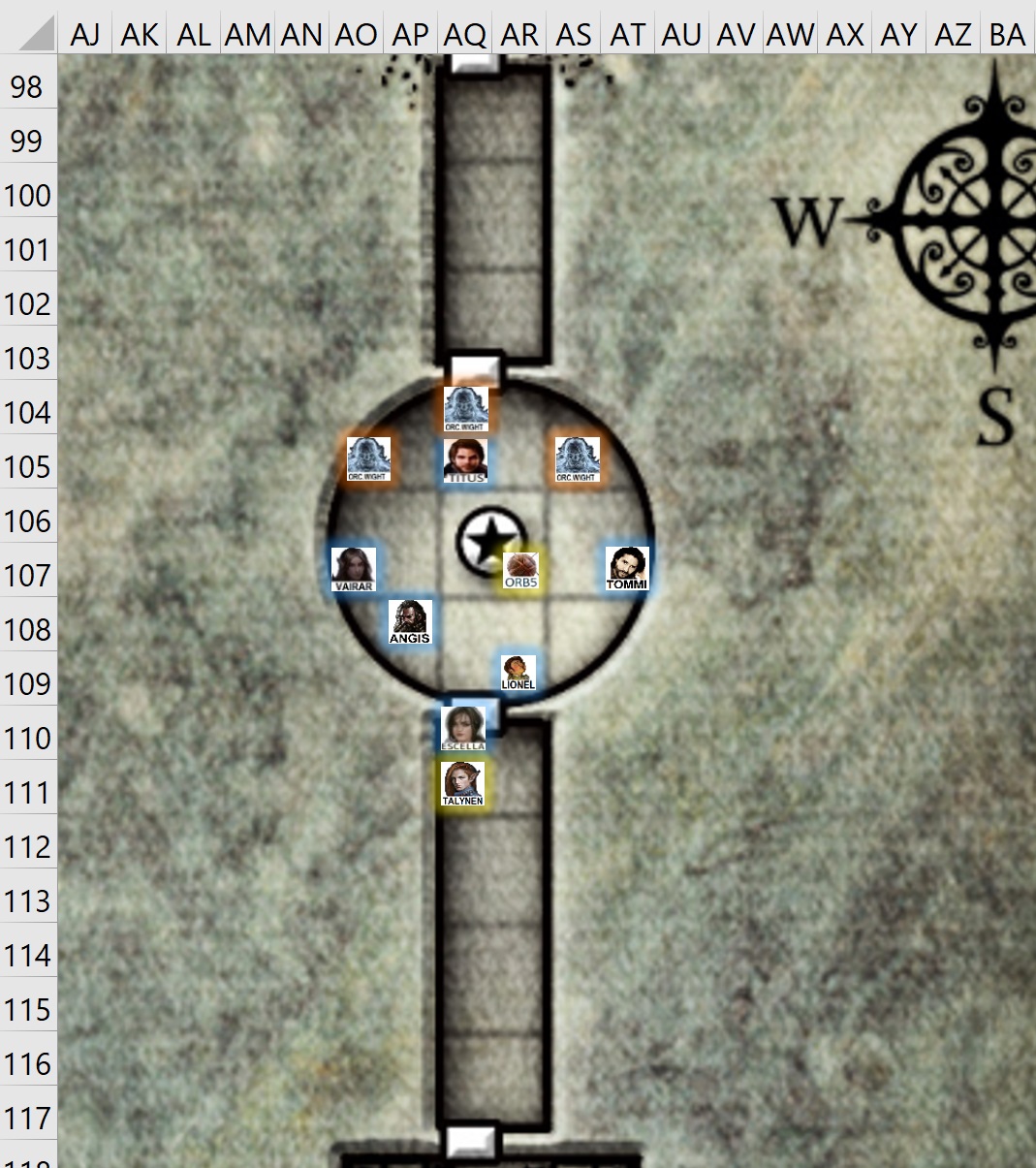 Titus. Nooo! Lionel can't believe his eyes. Titus just blasted Viarar. What is happening? ...and what are those ghostly orcs doing here?
Lionel can't face attacking Titus — he is a friend after all. Instead he focusing his attention on a ghostly orc, looking for any weaknesses.
Lionel found a spot that he could target and lifted his crossbow to aim. The bow felt very heavy but Lionel managed to take the shot.

Escella sends a chaos bolt at the wight on the right (AS105) but misses.

Supporter
Months ago, going back over a year now, Sherlen used to read Tommi stories, when he was in the lock-up, stories about saintly men and women defeating the living dead. She thought it might warn him from his wicked ways; he enjoyed the mellifluous way she read, and the voices she would do for the victims of the creatures. He had heard of wights:

"Fight'em in daylight, not in the night,
Magic and silver are bane to the wight. -- Do you know that rhyme, lads? Do you?"

Tommi takes the final magic stone in his hand, loads the sling. "Orb 5? On Titus, careful!" and with an underarm swing he launches the stone at his former comrade.

He thrusts his hand in his pockets, and pulls out three more stones, which he charges by blowing into his cupped hand.

"Begone, orcs, this is not place for the dead or the orc. Yield to you fate!"

Vairar calls out as the pulse of bluish light, like when you see a flash of lightning through a window, races over the room.

Talynen bravely starts forward, but then thinks better of it. It is crowded in there and his longbow may serve him better with that human behind the lines. Unfortunately, the statue is on the way and one arrow shatters against the stone while the other goes too high to affect the human and pings off the wall behind him.


The wights cringe and hide their faces from the flash of the priest-invoked power. But the one closest squints and rushes forward swinging its axe. The swing goes wide, moved aside by the orcs need not to impale itself on the spear. Leaving the axe to end its swing one-handed, the wight reaches with the hand trying to touch the offending elf. But that too only touches the shaft of the long weapon as the priest moves to defend himself.

The haft pales slightly at the touch of the undead, but nothing obvious happens.

“All right, boyo,” Angis said with a resigned sigh as he spun his axes in his hands. “Ye asked f’r this.”

Vairar invoked his deity, and two of the orc wights went running. The other, however, stepped up to block Angis’ path to Titus. So Angis stepped up and slashed his axes as the undead creature.

OOC: So I wrote and rolled as if just attacking the wight, but if Angis can squeeze into that upper left space beside the statue so he is next to Titus and the Wight, he will prioritize his hits on Titus, so I added Hunter’s Mark rolls for if he can hit Titus. So 4 attacks on Titus, if possible, otherwise on the wight.

Not wanting to harm his friend, Lionel eyed one of the orc wights until he spotted a weakness in its defenses, and he put a quarrel true into the creature. Having no vital organs, though the thing lurched with the blow (at precisely the moment that Escella's blast flew over its shoulder) it began to come for Tommi, who was recalling a rhyme. Sure enough, the quarrel did not seem to harm the thing as much as Lionel would wish.

Vairar held forth the symbol of his god and bluish light shone across the room causing two of the undead orc creatures to turn away. With nowhere to flee, they covered their faces and hollered. The third creature fought its way through the light and swung an axe at the elf, who side-stepped.

While this happened, Angis climbed on the low dais on which stood the statue of the elf god. This made him equal in height to Titus, and he lay into the young nobleman with his battleaxes. Titus may have been able to hold off the dwarf, but at a critical moment, ORB5 buzzed between them, and Titus brought his shield down to block an axe-blow. At that moment, Tommi struck him in the side of the head with a sling-stone, and Titus blinked back tears, one eye still smouldering.

Angis nodded grimly as Titus shook his head to clear it, and struck him on the other side of the head with the flat of his axe. As Titus brought his shield up to protect his head, Angis dropped low and struck him twice in the groin, causing Titus to fall to the ground, unable to stand. 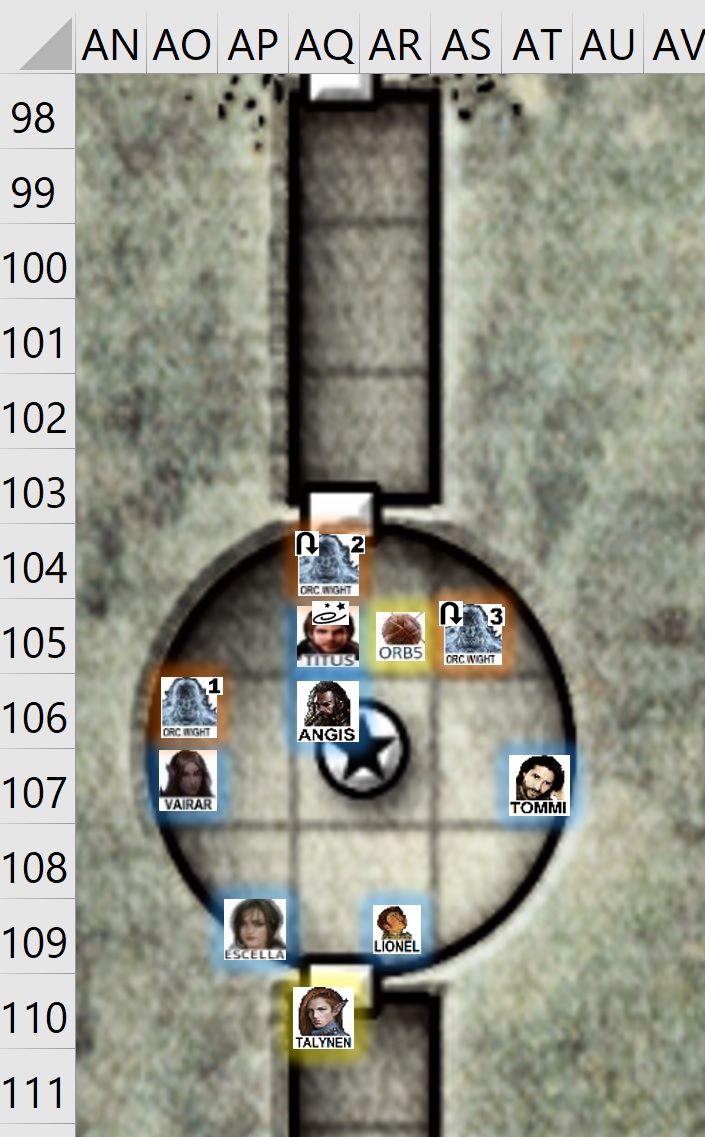 "Good work Angis!" Talynen shouts "Lets get these orcs out of the halls!"

He knocks another arrow and lets fly followed immediately with another. He found his rhythm it seems as both thud solidly into the orc flesh.

Angis stared down at Titus as the boy fell. “Boyo, we’ll get ye some ‘elp,” he promised. Then he gave a yell and jumped down, at the orc wight attacking Vairar, moving his mark and laying into it with his axes.

Seeing Titus fall, Vairar only partially focuses on the wight which shows in his performance. The spear tip is too far behind to effectively bring against the undead and the statue doesn't help.

While the pennon on his spear follows the spear-tip, tracing the path through the air, looks magnificent, it doesn't add to the effectiveness of his attack.

Saturday at 8:42 AM
Leatherhead