Escella sends a pair of eldritch blasts at the remaining aggressive wight. The first shot is dodged but the second strikes true.

Supporter
Tommi sees his former companion Titus fall, hit by many savage blows. Blood pours onto the floor, and there is no doubt of its source.
"Oh, Titus," he repeats, as two of the Orc companions start to back away. Tommi wonders if he can get past them, into the befouled shrine beyond.

He takes a step back lets loose one of the stones, which hits (un)dead centre. He then rushes towards the shrine, hoping to interfere with whatever is happening there.

He does not take the time to look at Titus as he passes.

While the other orc-wights hid their faces from Vairar's light, the Daggerfordians were swift to bring down the resistant one. They hacked, shot, and pummelled at it until Tommi's well-placed magical sling-stone struck it in the nose and the thing fell, becoming a desiccated orc corpse with dull sigils carved into its flesh.

Tommi rushed to the door and found it locked, but by his feet Titus stirred, still incapacitated by Angis' powerful but kindly non-leathal blow to the groin. He whispered weakly, "Tommi. The key is hidden in the statue."

Lionel saw his friend fall down but, fortunately, Titus was not mortally wounded. The two remaining shadowy orcs were cowering as Lionel stepped up and heard Titus' whisper. He looked around the statue and found a small hidden section at the back. He grasped the key — a strange but beautiful key — and tossed it to Tommi, who stood by the door at this point. Here, Tommi, grab the key!


Bonus Action: Eye For Detail (bonus action to spot hidden creatures or objects) Perception check for hidden key: 1D20+4 = [11]+4 = 15 (I assume that would be enough to spot the hidden key?)
Action: Grabbing key and tossing it to Tommi.

Lionel tossed the key to Tommi, and the lad quickly opened the door. On the ground below him, Titus groaned and said, "Stop them, Tommi! Sing-Axe is horrible! I have seen him, Tommi! They mean to free him from Hell!"

With that warning echoing in his mind, Tommi ran forward. What had been a short, narrow tunnel grew unnaturally large as it went. Tommi could feel the magic that caused the effect - it pulled at his skin. Though he remained his own size, the tunnel grew to a large, oversized door. Even to Tommi's limited magic training (he knew a few minor tricks) he could tell that the magic required was powerful, but unstable.

The door was tall enough that Tommi would need a boost up to get at the keyhole, which in any event appeared far too large for the key. 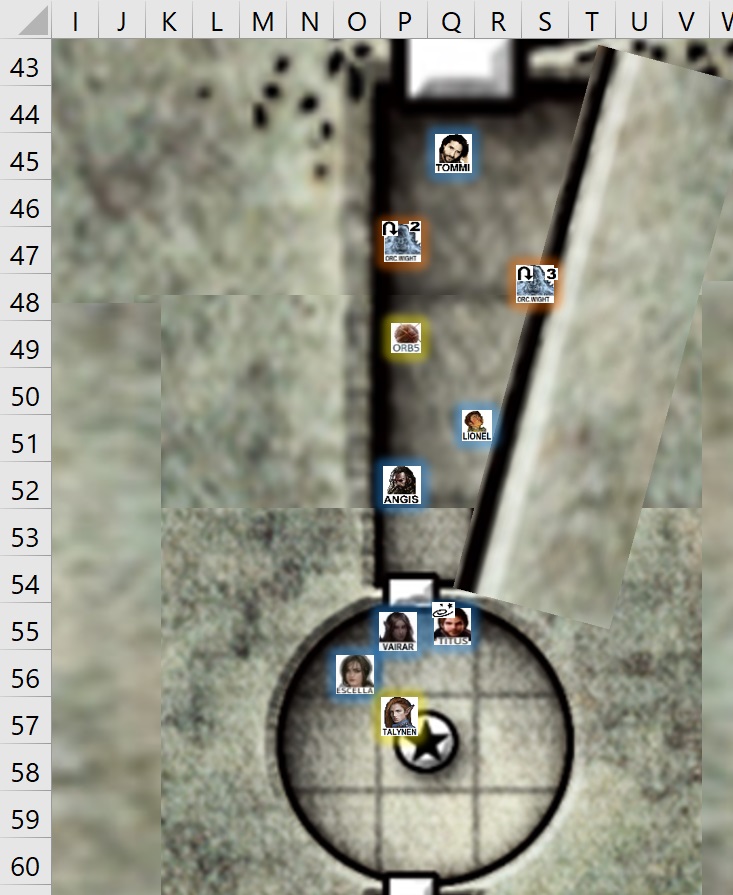 "Does anyone have any healing left?" Escella walks into the weird chamber trying to figure out if it is an illusion or real. She sees that Tommi, no one really, will not be able to reach the keyhole. "Tommi, open your hand. I will lift the key to the keyhole." She casts Mage Hand and attempts to put the key into the keyhole. Though she isn't sure how it will work if the lock is still mechanical.

Supporter
Tommi opens his hand and the key rises from it under the power of Escella's mind.

Tommi wants to close his eyes, and feel that the door handle is in fact right where it should be (relative to his size). Regardless, that is where he will push when the key itself turns.

As the key rose into the air, it too changed size. It was unclear if the key had just become part of the size-altering spell, or if it changed size on its own to fit the lock; at any rate, it slid into the keyhole and Escella caused it to turn.

Tommi shoved at the door, which was large and heavy, but swung inward just the same. The modest circular room that Tommi had seen before was now a large circle and two of the portals were very much active. Directly across from the now open door was an open portal to a ruined castle on a hill (Tommi had seen this place before - through the same magical door - but now the door was large enough that a mob of armoured orcs were marching through it, their backs to the Daggerfordians.

On the right, another large portal led to a massive barracks, filled with armoured orcs, ogres, and trolls. Another mob of orcs made their way forth from the barracks, coming in to the portal room. In the room was a Red Wizard of Thay, with two orc bodyguards, who directed the orc mobs in the Thayan language.

Beyond him stood Shalendra, chanting as if she were maintaining a ritual spell. Her face bore the same mask as Titus - shadows on one side and a glowing eye on the other. What could be seen of her face was lined with tears. Beside her, only semi-conscious and imprisoned in magical bands of iron, was Sir Darfin Floshin. 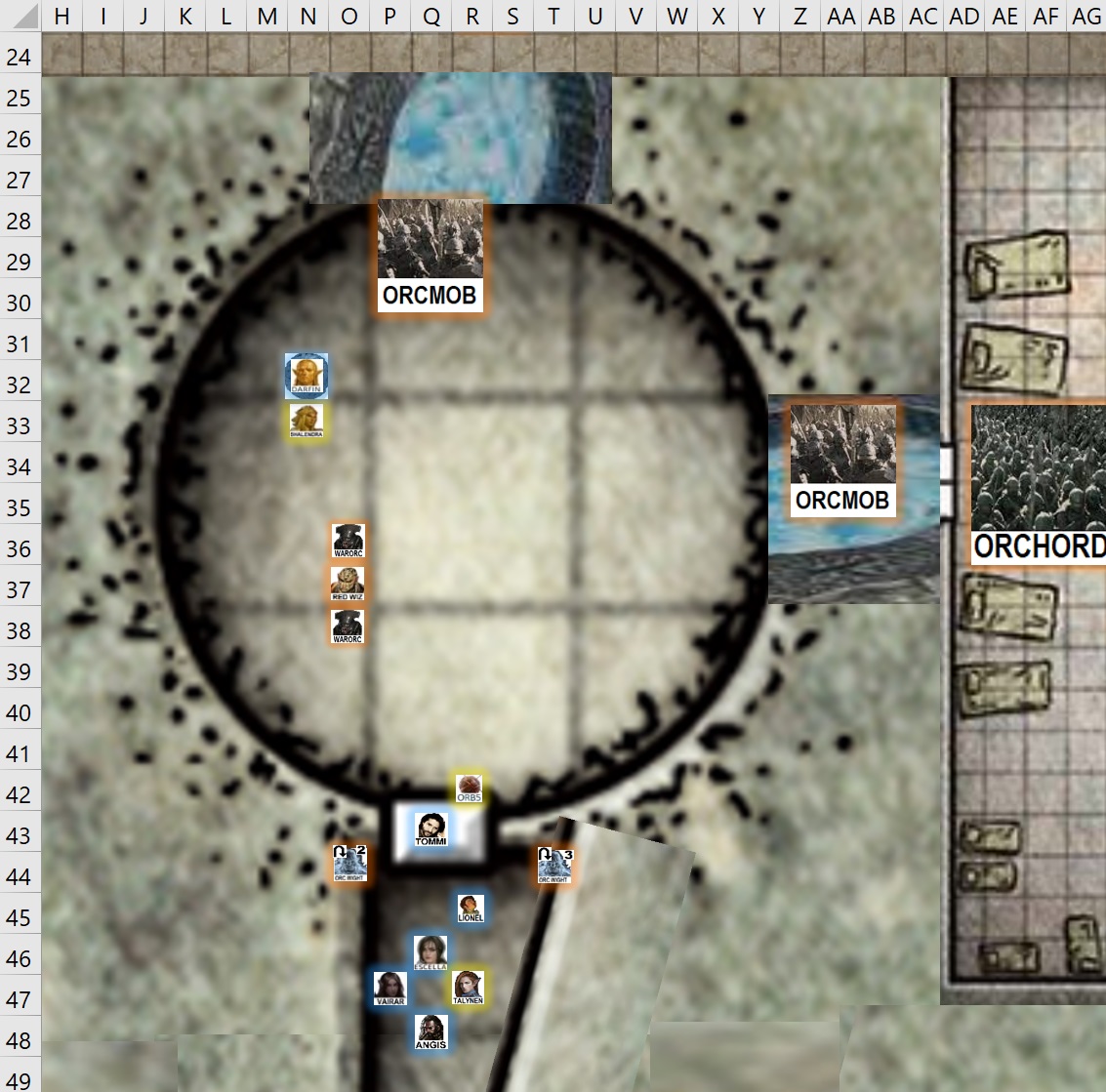 “Kill the wizard. Stop the ritual,” Angis told the others. Then with in-dwarven speed, his magic boots flaring with magic, the dwarf ran forward, sliding to a stop in front of the wizard and his orcs and giving the Thayan a big grin through his beard.

Supporter
If Tommi were to stop and think about it, he would be scared. He'd been in this room earlier, just last night, but now it was a nightmarish confusion of things, with troops marching through from one portalled world to the next.

If Tommi were to stop and think about it, he'd harken to advice that Sherlen and his mom had told him about rushing in on his own -- something he always knows has severe consequences -- but that is not what is forefront of his mind at this time.

Tommi sees Shalendra, casting a spell, and doesn't stop and think about it.

He bursts into the room, even in his weakened state, and starts running towards her, even as the ground between them appears to stretch away. He hopes he can do something to interfere with whatever is happening here.

With his side arm he launches a stone at her, and it seems to hit. He runs past the red wizatd and his guards. With all the enemies nearby he knows he should be more cautious as he approaches, but he continues to run, and is surprised to discover he has drawn Gutter as he bears down on her.

As Lionel came through the enormous door, he saw with horror the masses of orcs marching through the portals. Angis must have understood what made the portals stay open, and he yelled to kill the wizard and stop the ritual. Tommi had rushed forward and was facing the wizard. Maybe that was enough to distract her.
Lionel raised his crossbow and let the bolt fly.

Escella regretfully sends two Eldritch blasts at Shalendra (or the red wizard if the Shalendra's lost her concentration).

Vairar understands the need to break the ritual, but they also need healing and he concentrates on that part of his duty. There will be time to deal with the orcs. Hopefully, someone will stand in front of him. But for now, Tommi in his foolish rush feels the cool touch of a mountain breeze caressing his neck

Action: Dodge (AC 18)
Move: in front of Talynen so he can see most of the area

Stay back, foolish boy!" Shalendra said as Tommi rushed into the room, followed quickly by ORB5, Angis, and Lionel.

As Tommi slung a stone at her, she brought up her sword (which she used as a magic implement) and a shimmering field appeared in the air around her. The stone sparked off of it and skittered across the floor as ORB5 buzzed about her. Annoyed, she swung her sword at the little orb, that created a similar field. For a moment they squared off in a shower of sparks, then Shalendra plunged her sword into the orb, splitting it in half.

By then, Tommi had moved up drawing Gutter. He saw the two halves of ORB5 fall to the ground with great disappointment. Across the way, Lionel was taking aim with his crossbow, and Tommi held just enough of Shalendra's attention that her shield was held low enough that she failed to stop the quarrel from striking her in her shoulder. The fighting had been one thing, but the pain and the impact staggered her, and the delicate magic that she was maintaining to keep the room large enough to move the orcs through failed.

The entire room suddenly lurched and twisted. The door and hallway where stood Escella, Viarar, and Talynen slammed toward them like a moving-wall trap. The magical portals through which orcish mobs marched shrunk suddenly, throwing orcs to one side or the other, or tripping over each other as they were shoved together.

The effect was disorienting, to say the least.

FitzTheRuke said:
...then Shalendra plunged her sword into the orb, splitting it in half.

By then, Tommi had moved up drawing Gutter. He saw the two halves of ORB5 fall to the ground with great disappointment.[/ooc]
Click to expand...

Escella falls to the ground