aco175 said:
In the fight scenes, they have some sort of armor that I would steal for D&D, but not sure the stats of it. I could just be mage armor for the +3 AC. It also looks a bit like some sort of psychic energy, but I would stay away from psionics in my games. It could be more of a force property added to light armor with the standard +1 to +3 and maybe give it a bit of something like protection from magic missiles.
Click to expand...

Are you talking about the shields?

If they’re accurate to the book (and if my memory serves), they repel faster forces (particularly ballistics), thus the need for a melee fighting style with intentionally slowed-down strikes. The downside being that a lasers hitting them will trigger a nuclear reaction.

Today is the big day.
Dune will be shown on the big screen at the Venice Mostra festival. 12h45 ET.
Fingers crossed!

The reviews of the Venice screening that I've seen have been uniformly positive. Sounds like this might be the version we've been waiting for our whole lives. Has anyone seen it at one of the early screenings? 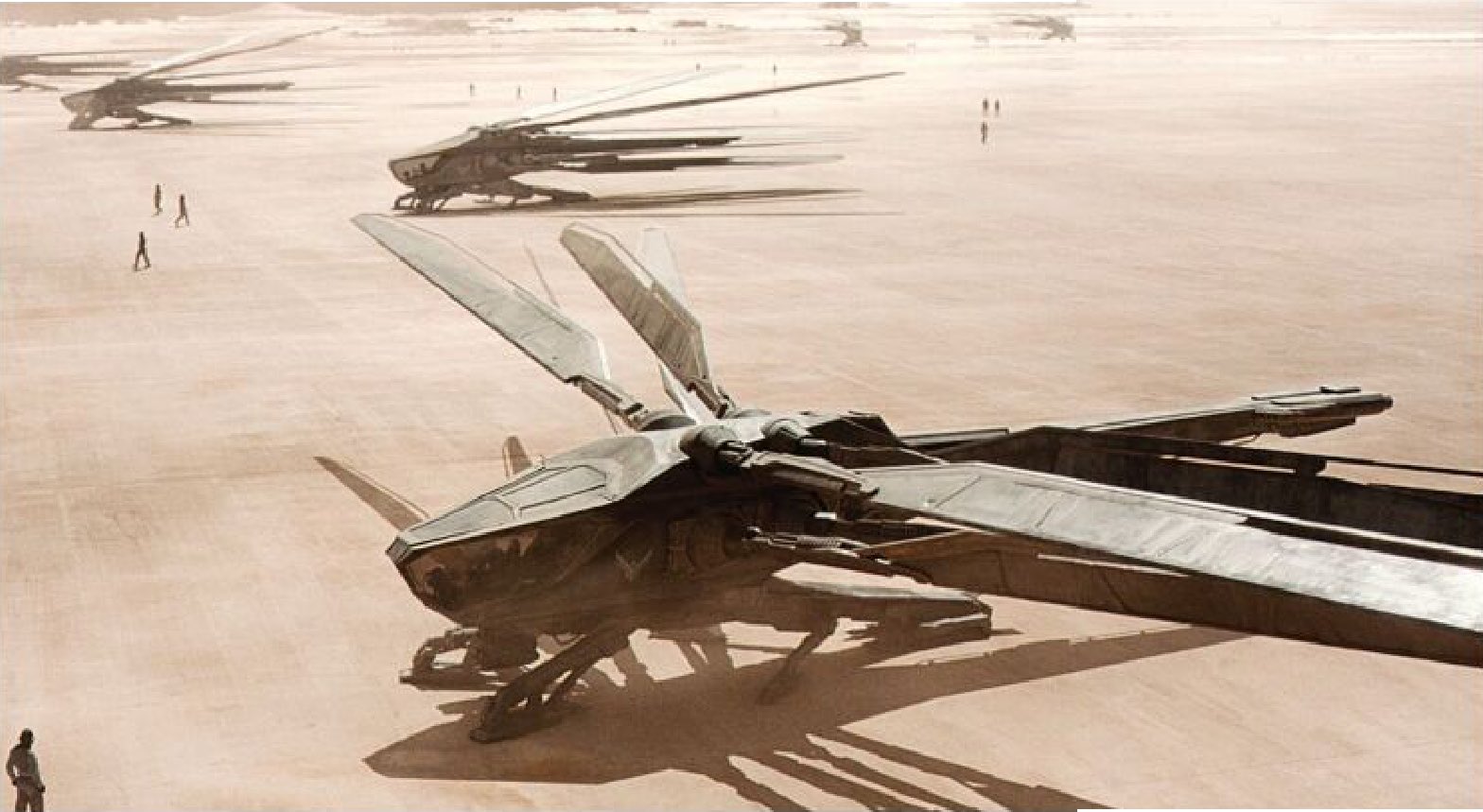 Considering what the definition of an ornithopter is, they look a hell of a lot better than in the 1984 movie.

Just saw the movie. I went in with super high expectations and was still blown away.

I love how convincing everything looks, and how the director takes his time to show that off. I did not see a single effect that didn't look real. He takes his time to tell the story and lingers on fantastic vistas.

There's a lot more to say, but I don't want to get too much into spoilers.

For book fans, if you are curious how well this movie treats the source material in contrast to the film from the 80s:


Yes we do see the weirding way, however brief, and no more sonic weapons. There is a lot of exposition, cleverly disguised as Paul's training. They don't explain mentats, but they are present and portrayed accurately.

Imaculata said:
For book fans, if you are curious how well this movie treats the source material in contrast to the film from the 80s:
Click to expand...

Nice. I sometimes feel as though Hollywood underestimates their audience. We don't need everything spoon fed to us. Just show us and we'll figure it out.

Imaculata said:
Just saw the movie. I went in with super high expectations and was still blown away.
Click to expand...

So stoked to hear this. Been a Dune fan since the 80's, and while I'm one of the rare cats that loves Lynch's version in all its badness, this sounds like the big screen version I've been waiting for my entire life.

I really like Lynch's Dune. It's a cinematic masterpiece. It's a fever dream. It's just not like a good adaptation of the source material.

Oh, the maxi-strength hairspray that they had to use in Lynch's version.

I am of the same mind. Lynch's version has great art direction, great miniature effects, a stellar cast and a great score. It also nails the mood of Dune. But it fails as an adaption of Dune, and the choice to make the audience hear the thoughts of the main character does not work. Plus there were some awfully dumb changes that were made.

Villeneuve on the other hand, is extremely dedicated to making his adaption as close to the source material as possible, and he takes his time. He lingers long enough on the fantastic locations and vehicles for you to appreciate them. Paul Atreides still has plenty of visions and dreams, but Villeneuve handles that perfectly. He also takes enough time to explain details about the setting, so that none-book readers can follow along as well, without it ever feeling like straight up exposition.

I was especially impressed by how Villeneuve handled the personal shields. Without over explaining them, he simply shows you how they work on people, vehicles and buildings. He assumes the viewer is smart enough to understand what is being shown to them. For those not in the know: in the Dune universe, everything can and is protected by forcefields that stop objects above a certain speed. This means high velocity projectile weapons, such as guns, are useless. But slower weapons, such as swords, knives and poison darts, can pierce these shields. And we do get to see these shields being used consistently to protect all three of these things. Villeneuve understands Dune, and understands how important it is to get these details right.

There also is a much bigger role for Jessica, who plays a key role in the books, and is a bad ass. Her role is not diminished in Villeneuve's movie.

I've already praised the design of the ornithopters, but they look so convincing and cool in this film. I also love the designs of the Harvesters, which much closer resemble what I imagined them to be than whatever we got in Lynch's film. They are huge loud lumbering factories on huge tank tracks (as they should be) and they look great.

The sandworms, which we are not shown too much of, look very menacing. And I especially appreciate how Villeneuve shows the rumbling and displacement of sand whenever one is near. He really pays attention to the details.

Of course this is only part 1. The movie ends mid story, which may be jarring to some. But it is the logical mid point of the story. You should know going into this that this will be at least a two parter, and that you'll have to wait at least a year or so to see how it ends.

Imaculata said:
You should know going into this that this will be at least a two parter, and that you'll have to wait at least a year or so to see how it ends.
Click to expand...

I have heard that part 2 does not have a completed script yet, so I would think 2 to 3 year wait more likely.

Yeah, part 2 has yet to be greenlit. Everyone who loves this better go see it 10 times in the theater!

I'll wait as long as I need to. Considering the hype and rave reviews, I would be shocked if this didn't get a follow up movie.

Campbell said:
I really like Lynch's Dune. It's a cinematic masterpiece. It's a fever dream. It's just not like a good adaptation of the source material.
Click to expand...

Lynch's Dune: a great movie, just not a good one!

Mallus said:
Lynch's Dune: a great movie, just not a good one!

I saw Lynch's Dune in theaters way back in 1984. I was a weird little boy so I enjoyed it even if I didn't understand everything. I still can't believe there was a toy line for it.

Zardnaar said:
Got into Dune universe via Dune 2 Battle for Arrakis.
Click to expand...


Same! My father was really into the books, and explained the lore to me while I played.

Today I'm friends with the developers, who are amazing guys.

Hollywood's creativity problem and a (ranty) stroll through endless remakes...
5 6 7 8 9

D&D Movie/TV An Analysis of the Dungeons & Dragons: Honor Among Thieves Trailer
3 4 5 6 7