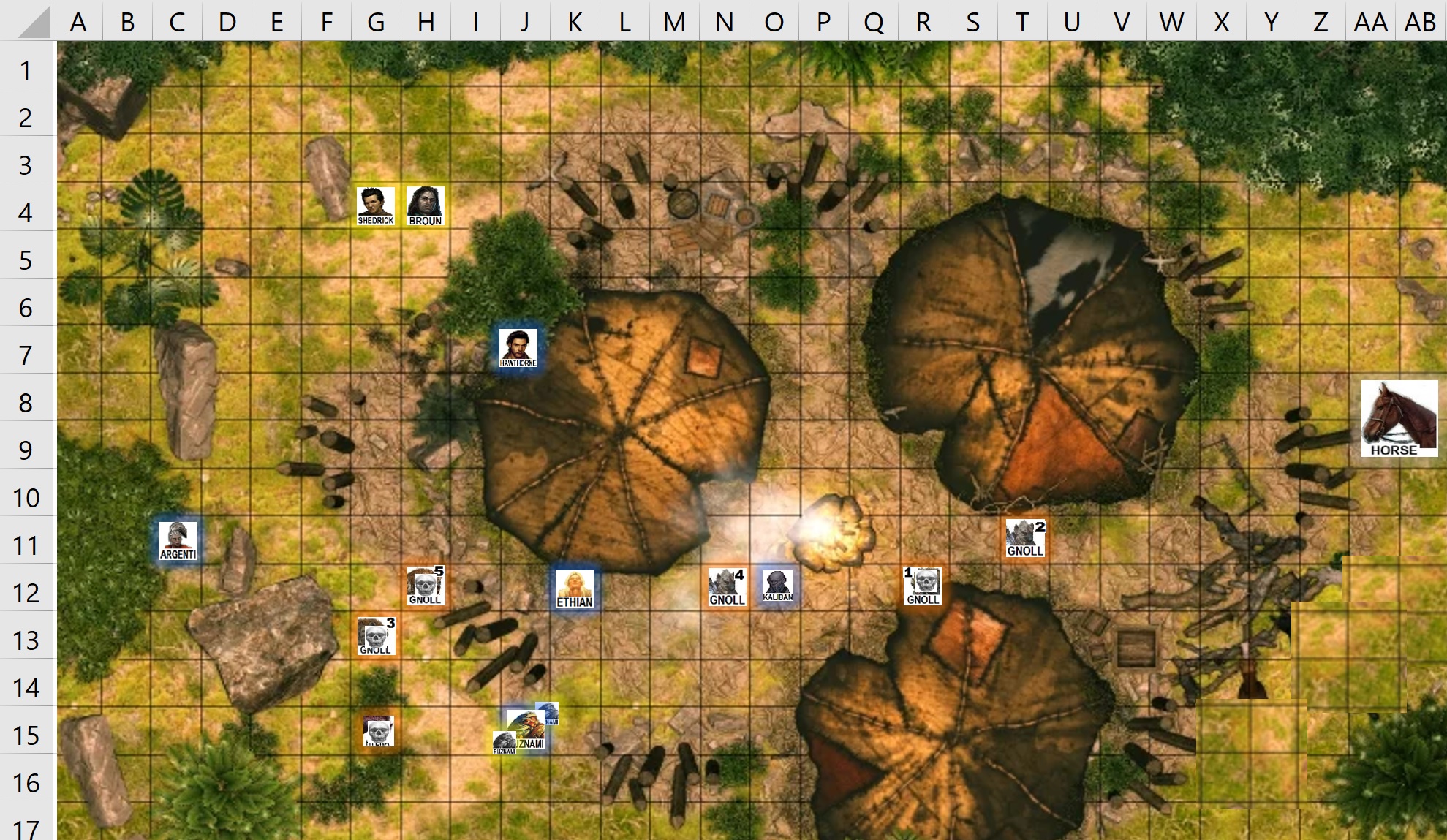 Kaliban senses the gnoll behind him. Without thinking his mind creates a force shield between himself and the gnoll. The arrow that was fired stops inches from Kalibans back and drops to the ground.

With all the gnolls taken care of on the west side of the encampment... Hawthorne listens and hears the thwack of an arrow hitting a shield around back to the east side. He once again silently moves around the north end of his tent, cocks another crossbow bolt into his weapon, then peaks out from behind it to see another gnoll back partially behind the eastern tent.

He whispers to himself "Come on, you... step out... step out... don't make this shot harder than it is..." then raises the crossbow and fires, hoping to catch the gnoll and not the tent...


But sure enough, the young man was not able to get his aim right across the camp and the bolt impacted against the canvas of the large tent, rather than his target.

Argenti effortlessly strode on top of the rock she had been using for cover to get a better look at the battlefield, spotting the archer beyond the fire pit. Eye's narrowing on the beast, the warlock winds up to hurl another green stone. "Whoo!" The pitch lands square in the gnoll's stomach, eliciting a yipe of pain.

Ruznami signalled to Archimedes, and the owl swooped down at the gnoll that was in Kaliban’s face as the dwarf wizard marched up the hill to the gnoll and swung his warhammer, striking the gnoll hard, but not killing it.

Kaliban takes advantage of Archimedes distraction and slashes at the gnoll. The strike lands true, piercing the creatures heart. Turning in a fluid motion the gnome spins and moves to engage the final gnoll. Pushing himself he slashes again but his luck doesn't hold out and the gnoll deflects the blow with his weapon.

...As the last gnoll deflected his blade with her bow, Kaliban ducked low and brought the blade up suddenly. The bow split in two and the blade pierced the gnoll's abdomen and she fell to the ground kicking and howling before she lay still on the ground.

Back down the hill, Shedrick helped Broun to cover. For a moment he considered feeding the valuable healing potion to the half-orc driver, but he heard the gnoll's death-wail and the silence that followed. He kept the stopper on and instead patted old Broun on the shoulder and said, "You'll be all right, old man. We've got a healer."

Broun would normally have objected to being called old, but at the moment he just sighed and nodded in relief. The lack of objection and the general look of defeat on a man who he knew well (and found intimidating) shook Shedrick worse than had the threat of battle, and he bitterly regretted the jibe.

As Ethian bridges the distance to the last gnoll, he begins chanting to bring forth holy light.

Perhaps it was Ethian's flame, or perhaps it was Kaliban's blade that felled the last gnoll. Either way, the hill fell silent and the group that had gathered in Candlekeep had their victory. A solid, well-earned victory. They had all done their part, and their assault had gone so well that the only injury was a small scratch to Ethian's ribs from a near-miss from a spear thrust. His tunic needed mending, but his skin was barely broken.

On the other hand, Broun had been badly beaten. In addition, they needed to find the two missing horses before dusk, which was now less than an hour away. The tents were large, but according to Broun, there were no other gnolls. This group was most likely out of the Wood of Sharp Teeth (named for its history of werewolves, demons, and demon-worshipping gnolls) which began some thirty leagues to the east. Gnolls raiding along the Coast Way was not unheard of. It was rare for them to venture quite this close to Candlekeep, however.

With his ritual enhancing his sight, Ruznami noticed, on the body of the pack-leader, two items that he quickly realized were potions, stored in purpose-carved gourdes. One was easily recognised as a healing potion (though darker in liquid and earthier smelling than he was used to). The other looked and smelled like rotting blood, but it gave off an aura of infernal magic.

Ruznami panted a bit at the exertion and excitement as he stared down at the gnoll he’d killed. The first sentient being he had killed… The dwarf turned and threw up. When he was finished, he pulled out his canteen to wash the vomit from his beard and clean his hammer before whistling for Archimedes.

A glimmer of color caught his eye. He went over to the gnoll leader and pulled out two gourds containing potions of some kind.

“Got something,” Ruz reported to the others as he studied the magical auras around the potions.

OOC: What schools of magic are they?

KahlessNestor said:
OOC: What schools of magic are they?
Click to expand...

Ethian plays a bit with the tear in his tunic I’ll fix this tonight he thinks to himself. He takes a quick glance inside the tents to make sure no ennemies are hiding, and resists an overwhelming feeling of revulsion by what he see in there. He moves on to Broun “Lay still my friend, let me see your wounds ”. He asks Ruz “Is there a healing potion? If so, this man needs it. I’ve only prepared a battle healing spell, and this man needs more than what I can do”.

Shedrick nodded and pulled the stopper on the healing potion. He'd hoped to save it, but he knew the elf had a better idea of Broun's condition than he did.

"Holdin' out on me, boy?" snarked the half orc as he gratefully drank, "Aah. That's good stuff."

The half-orc climbed to his feet, still a little wobbly and looked around for the horses, giving a whistle.

"They won't have gone far." he insisted and he gave a look to Shedrick that suggested that the young man go find them.

The three remaining Ruznamis gathered up the potions from the gnolls. The dwarf looked over at Ethian. “This one is a healing potion,” he said, tossing it over to Ethian if he needed it. “The other one is something else. Give me some time, and I’ll identify it.”

Ruznami pulled up one of the seats the gnolls had used around the fire and pulled out a large pearl. He settled the potion in his lap and prepared a ritual that would let him identify it.

When Ruznami was done his ritual, he knew that the potion was known as "Blood of Yeenoghu" (whether or not it possessed any actual demon blood, far or less the blood of a demon lord, seemed unlikely to Ruznami, though it very likely did contain the actual blood of someone, much to his disgust.

Ruznami blinked as he came out of his spell and stood up. “It is a potion to make the drinker into a ferocious fighter, heedless of his own safety as he rages through battle like a demon lord,” the dwarf said, holding the gourd out to the others.

OOC: Sorry if it confused anyone. I posted my last post from home, and it must have logged me in under my own name for some reason. Or I picked the “Log in through Goggle” option rather than looking up my account information.

As the last of the hyena creatures falls, Hawthorne sighs in heavy relief and shakes his head in amazement. This was the kind of actions his older siblings got into, not him. He wipes some sweat from his brow, places his crossbow back into its holster, and then quickly jobs back over to his men. He arrives just in time to see Broun down the healing elixir, whistles for the horses, then suggest Shedrick go find the ones that are missing.

"My goodness, Broun, you gave us all a good scare. How are you, my friend? I am very happy to see you came out of this ordeal with a head still upon your shoulders." He walks over and clasps a hand on the old halfork's shoulder. "I think this is something we need to report back to the Flaming Fist when we return to Baldur's Gate. I don't care the cost... they need to get more patrols out here on the road down to Candlekeep. This never should have happened."

As Shedrick hitched up his breeches in preparation to go find the horses as Broun suggested, Hawthorne raised a single finger to the young man. "Give me a moment, Shedrick, and then I will join you in finding the horses." He looks around at the rest of the group and nods appreciatively. "You have each done the Black Dragon's Gate a great service. Heedless of your own safety you have acquitted yourselves to the highest standard and brought our man Broun to safety. We cannot thank you enough. I will make sure you are each identified back at the offices for your bravery and sacrifice and will do my best to see that you are rewarded for your service."

He nods to each of the men and women here, then looks back at Shedrick. "Come, my good man. Let us see if we can find the other horses so that we can get Broun saddled up and ready to go back home properly this time!"

With the last gnoll felled and the camp clear of other dangers, Argenti sits and meditates. The earth was her element, and though the dust and dirt on the ground here was different than the sands of her homeland, sifting it between her fingers served well enough to calm the adrenaline of battle. During her travels, the genasi had seen several tragic events, and it felt good to prevent one of them.

After Hawthorne's speech, she takes a moment to gingerly clasp the wounded half orc. "Good to see you up, Broun." Smiling, she turns to the scholars of the group. "Do you suppose Candlekeep would let him stay a few nights before heading home, as a mercy?"

At Argenti's suggestion of staying at Candlekeep, Broun straightened and said, "I wouldn't want to be a bother to those learned folk. Thanks to you all, I should be well enough once we're away from here and on the road. The coach tipped over when they killed my lead horse (I had tried to make a dash for it) but it should be easy enough to right and repair if we can get back to it."

It had been part of Shedrick's duties on the way down that he help Broun to water, feed, and groom the horses at the various rest stops. The horses remembered him, and though they were frightened by the smell of gnolls (and the blood), they came when he called. With Hawthorne's help, it was a quick thing to gather them up.

It would be growing dark by the time the Black Dragon Agents returned to the main road (and the site of the overturned coach). A discussion began on the merits and issues with staying at the gnoll camp until morning.