If you have a few hundred dollars durning a hole in your pocket, Beadle & Grimms’ customary platinum edition of WotC’s latest D&D book is available for preorder.

Actually, this has nothing to do with Mars, but it does have to do with space.

Also, no goblins to speak of.

So maybe we walk that title back and start over.

Get ready for the greatest space adventure of all time—yours! Jump into the Wildspace adventure of Spelljammer: Adventures in Space* and explore new worlds, encounter new creatures,** and jump from spaceship to spaceship like the Space Pirate you always wanted to be!

This Limited Edition Platinum set includes:
* No one needs goblins.
** Unless you’re a goblin (see above).
*** See, that worked out fine. At Beadle & Grimm’s our creative process is built around surprise, fear, speed, and very little editing.
**** Maybe even goblins. One can dream. PRE-ORDER PRODUCT! SHIPS Q4 2022 Mars needs Goblins!*Actually, this has nothing to do with Mars, but it does have to do with space.Also, no goblins to speak of.So maybe we walk that title back and start over.Wildspace needs you!** Get ready for the greatest space adventure of all time—yours... 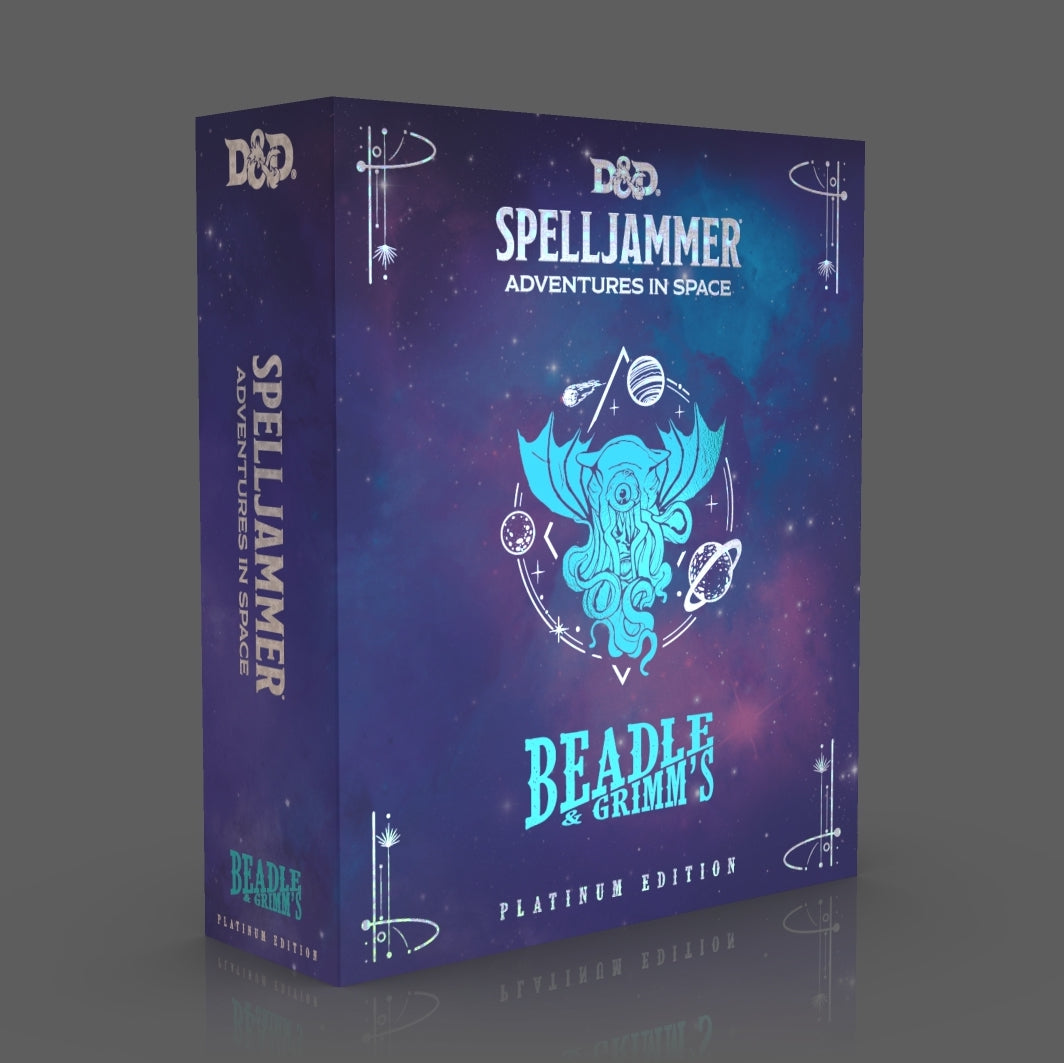 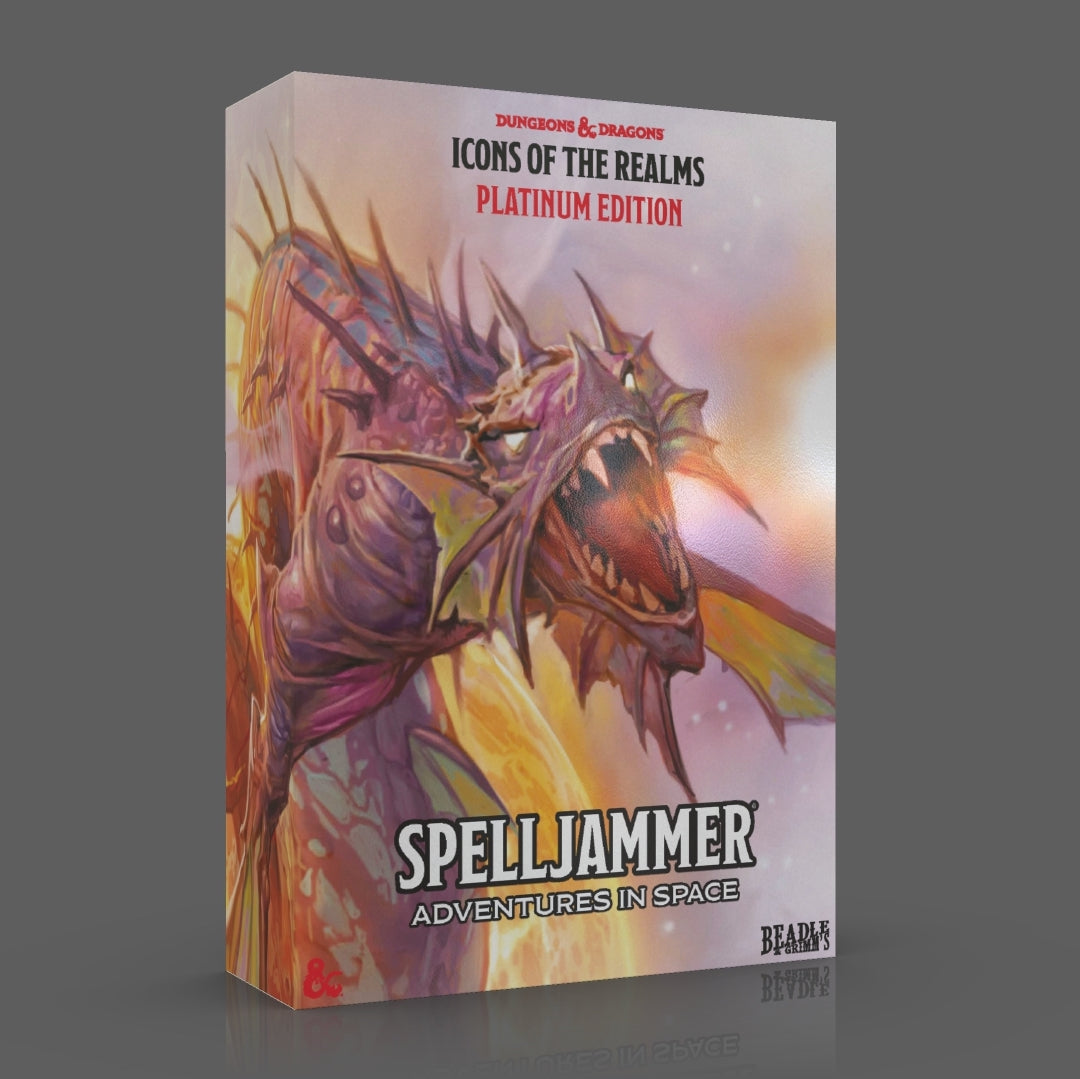 I am paying for the additions tho.

If those aren’t in the normal version, that’s like saying people who use miniatures are wasting money when they could use cardboard tokens or just random dice as stand ins.

I'm wondering if professional DMs find all this kit at this price a good investment because they will be using it repeated. I suspect the answer is "It would if the career made enough money that I could use it as an investment."

And again, I have seen a couple D&D man caves of those who make six figures. They have duplicates and triplicates of TSR products and boxed sets still in the shrink wrap (or it was shrink wrapped after the fact.) Even if they played and used each product ,the extra copies will never get used.

As I side note, I probably won't buy these more expensive sets. But I can see how they keep the hobby alive and have some extra cachet.

Double side note: I called it. People asked me when would D&D ever get mainstream and I told them, "When it makes as much money as a pro team." When something makes bank, it becomes validated in our culture.

Heck, I am a Cypher system fan and I've people become much more curious about that system since its latest kickstarter,
Old Gods of Appalachia Roleplaying Game has reached $1.4 Million, many of them citing the kickstarter's as what got their notice.

Wait… why are the books softcover? Now I’m reconsidering the silver edition. (I don't use minis, so platinum is out) I like big sturdy hardcovers. Hmm…

Umbran said:
In terms of plot and game content, they seem to be, yes. No stat blocks or encounters have been changed, the NPCs actions and motives remain the same, and the so on. The Beadle and Grimm's versions seem to be strictly additive, and the additions don't seem to be mixed in with the rest - extra side adventures are included in a separate booklet, for example. So, the B&G version can be used seamlessly with, say the D&D Beyond version.
Click to expand...

This was also my experience of the B&G version of Curse of Strahd - I have to imagine it’s part of their contract with WotC.

In example: CoS (in)famously only contains isometric maps of the castle. The B&G version includes extremely helpful top-down maps, but rather than include them in the adventure books, it includes them as a three sheet pamphlet. I don't know why they would do that unless they were barred from making changes to the adventure as published, but @MatthewLillard may be able to clarify if he pokes his head in again.

thundershot said:
Wait… why are the books softcover? Now I’m reconsidering the silver edition. (I don't use minis, so platinum is out) I like big sturdy hardcovers. Hmm…
Click to expand...


In Beadle and Grimm's, they break out the adventure by chapters, plus appendices and extra adventure materials. I expect it is so that you have the bits you need in a form that can lie open flat in front of you while you run the game. There's seven or eight of them in Witchlight, I think, so no, they won't be hardcover.