After successfully evading the guards outside the mine, the party of adventurers has finally reached the inside.

A large underground complex now lays before them and they quickly go to investigate the foreman's office, hoping to end the mining operation once and for all.

To the surprise of many of the heroes, the evil foreman is nowhere to be found. The office is abandoned, seemingly left in a hurry. Now they prepare to brave the depths of the mine with one question on their minds: where could the foreman be? 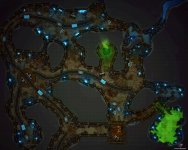 Why do all fantasy mines have mine carts on rails, even though they weren't invented until the 17th century?!

Not a criticism, your map looks great. Just grumbling about the trope.

After a nasty trip to the city sewers where the group tried to investigate the source of the vile greenish ichor, the fierce adventurers finally end up outside, near the edge of the city.

All the sewage from the city disgustingly pours in this area, but even that can't stop the evil gang of mages who contaminated the sewers with sentient sludge in the first place from showing up.

Waiting outside, the head mage and their minions will have a final encounter with the mighty group of adventurers.

Surprised, ambushed and drenched in filth, the heroes prepare for battle. Will they be able to get out of this sticky situation? 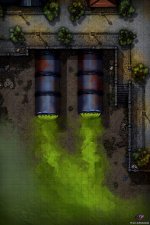 Along the path in the snowy landscape there's an old watchtower that saw plenty of use in wars of yore. Now abandoned by the royal army, the tower is mostly inhabited by bandits and other wrong-doers who happen to be strong enough take a hold of it.

These crafty individuals have even managed to repair one of the war-era ballistae and use it to rob travelers blind.

But the party of adventurers who happen to find themselves in this place are no strangers to danger. And even though the advantage provided by the fortification is plenty, the heroes always seem to find a way to succeed. 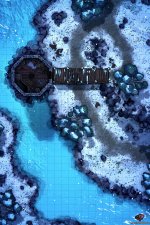 While traveling in the woods, the party stumbles upon a very old, very large tree trunk. The trunk, carved and imposing, serves as a bridge between the elevated surfaces of the terrain.

A battle soon ensues, the adventurers surprised by the group of owlbears that came seemingly out of nowhere. But a refined strategic positioning, along with a clever use of the bridge as cover, can ensure the survival of our heroes once more. 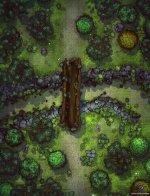 DiceGrimorium said:
While traveling in the woods, the party stumbles upon a very old, very large tree trunk. The trunk, carved and imposing, serves as a bridge between the elevated surfaces of the terrain.
Click to expand...

Oh, that's very useful! You can never have too many "travel" maps, because those are the ones you're most likely to need at short notice to insert into another adventure. And a unique terrain feature makes the fight more interesting. Thanks!

Young wizards from far and wide like to come to the Stoneflame Library not only for its vast selection of books on subjects of all kinds. They also like the relaxed atmosphere the library provides, with many magic users consorting with each other on how to create new magic spells.

Wizards of certain renown can also enjoy the more private quarters, located deep in the building. Here they can even get access to more rare tomes, knowledge that not everyone with a pair of eyes should know.

The library administrator is a friendly fellow who most of the time is locked in his office, along with their most trusted scholars. What goes in that room only they know, but I guess it's something harmless and it doesn't have anything to do with summoning beings from hell. Not at all.

Could be used as a stand along library or as a part of a bigger whole! 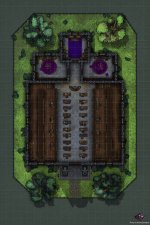 I don't know how I managed to miss this thread. I am a big fan of forest maps and downloaded all of them.

It is time for the party of heroes to continue their journey underground!

A series of complex cave systems, this place is the home of plenty of horrible creatures. But driven by their will and valor, the group presses on towards victory, defeating every foe that lurks deep inside the earth.

So be sure to place some cool monsters and let your group have a nice cavern crawl and collect some loot! 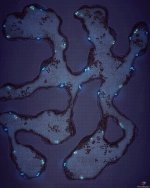 I'm scrambling to throw together a VTT game tonight. These maps saved my life!

In a remote village, far away from the Light, young 'uns have been vanishing well into the night.

The people of the village lived in fear, afraid of a wild beast that liked to eat their tender offspring. Enter a party of valiant adventurers, who for the right price, agreed to track down the beast and put it to rest.

The heroes tracked one of the children who recently went missing to a small set of huts deep into the swampy woods. To their horror they discovered that the children were used in terrible rituals to appease the evil gods of a sect of swamp hags, draining them of their life force.

Thankfully they arrived just in time to save the children and after a fierce battle were Light and Dark collided, the heroes were triumphant. Thankful for their efforts, the adventurers were rewarded handsomely by the villagers and a feast was had in their honor. 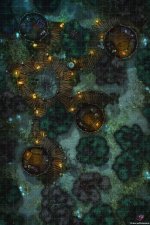 On their way to their very, very important quest, the group of adventurers decide to go the way of the road less traveled. Now lost in the woods because no one has the minimum sense of direction, the party is threatened by all sorts of wild beasts.

Monsters of all kinds also like to have adventurers for breakfast and so everyone will have to fight so they can escape certain death. But what is lurking behind all those trees this time? Direwolves, giant spiders, a lost specter? As always, it's up to you. 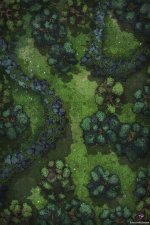 Is it me or does the season of horror and dread has come rather early this year? And even if you're not feeling it yet, that doesn't mean that in other planes of existence the machinations of dark forces are at rest.

Take for instance this horrible place of evil and decay where a handful of necromancers are conducting wicked experiments and rituals to create the perfect zombie: extremely powerful, obedient and with a liking for adventurer flesh.

They still haven't found the right way to do it though, and every night they go out in search for new subjects to submit to their nefarious experiments. Some say they only rob the graves of the recently departed for parts, while others think there's foul play involved.

Regardless, brave heroes from all around the land have to stop the madness before it's too late.

Could the heroes defeat the necromancers before the experiment is a success? Or will they have to face the horrible abomination the evil ones have created?

Alas, there's also the possibility that they'll befriend the gentle giant zombie who is stitched together with the body parts of several creatures and is a product of a ritual that didn't go exactly as planned. 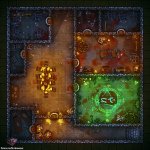 This is it, the players have finally reached the chamber where they'll test their mettle against the Firelord.

A precarious environment awaits them in the inevitable battle though: The four square platforms have a constant stream of magical fire on each of their corners and in the middle of them a deadly column filled with spikes.

To move around they can try to jump around on the rectangular bridges or even try climbing the chains.

But the Firelord, a magical being who is made of the hottest fire, will try its best to make the heroes fall into the lethal lava and turn them into crispy fries. 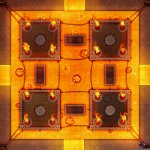 While travelling the woods, now completely derailed from their main objective, the party stumbles upon a peculiar sight: a statue of an old god, still being worshipped by a group of devout priests and priestesses.

Some of the heroes wish to investigate further, while some others prefer not to be involved in anything that involves the gods of ages past. But like most of the time, curiosity gets the best of all of them and they decide to see what's going on.

Will they be able to have communion with the old god? For perhaps doing a few requests will grant them divine favor, or grant them a powerful artifact from a plane long-forgotten.

Or will they try to stop this devious worship, and enter a battle where ancient magics can be their final doom? 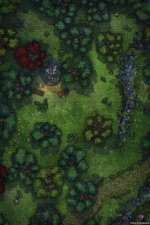 This is some seriously fine work! How have I not seen this thread before!

The heroes are making their way towards the icy fortress, ready to defeat the mad overlord oppressing the land.

But before they can reach their destination they will have to cross the long bridge that lays before the mighty castle.

Partially built with giant, magical blocks of ice, the bridge will pose a challenge to any creature that isn't used to walking on the slippery surface. There's a few places that such creatures can use to avoid always being on ice too.

They better don't get too comfortable there though, for they will also have to contend with the magic ballistae shooting ice bolts. A sure way to turn into a cool statue for sure. 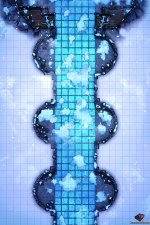 After many long battles, the party of adventurers decide to go to the nearest temple in the city to heal their wounds. They take a teleporter in the surface that takes them to the temple located in an unknown location.

Inside they find the priests and priestesses going about their sacred duties and all the visitors who surround themselves with the healing waters of the sacred sanctuary.

The party decides to join in and after a while most of their wounds are completely healed thanks to the divine magic.

But disaster doesn't take long to strike and soon the entire temple is invaded by hellish creatures from planes beyond seeking the ancient secrets of the holy site. Now it's up to the heroes to take a stance and the defend the temple at all costs. 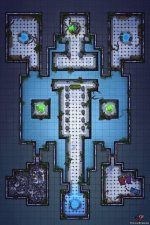 Once they finally recovered the long-lost map detailing the location of the ancient Warrior-King's tomb, the group of adventurers went on a long and arduous journey through the unforgiving deserts of the Known World.

On their travels they battled creatures from the Sands, made new friends and new foes. But now they have arrived. The sphinx that marks the tomb now lays before them, and the sight of it's pure golden shimmer is enough to make any rogue have the wildest dreams.

But entering the tomb won't be easy, for the guardians of the late Warrior-King are always watching from beneath: hiding, waiting in the hot sand. 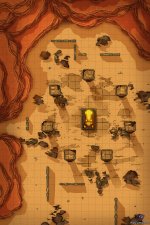 The way to the red dragon is paved with dangers of all kinds. But the party of heroes are almost there, with just one more obstacle between them and the mighty, fiery beast.

This bridge they must now cross is very old, and not very stable. The floor could collapse at a moment's notice, and that it's a fall that not many could survive.

Not only that, but the statues on either side of the bridge breathe fire after certain time has passed. Not a problem for any creature immune to fire, of course. But adventurers are seldom made of fire-proof materials.

Oh, and did I mention the dragon's minions are out to get those pesky heroes as well? We'll see if they're able to pass the final test and finally face the dragon once and for all. 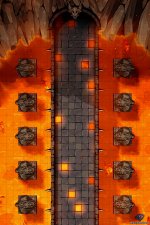 D&D as Therapy for Kids