~Is he going to or from the kitchen?~

~<Please form behind me as if you are my servants.>~

Eoghan strode around the corner like he's supposed to be there. As he gets closer, he called out commandingly to the orc in the Giant tongue.

::You there, we have just arrived. Where is Gulla's room?::

~Alright, let’s milk this for all it’s worth,~ thinks Jack to the others as he strides confidently a little behind the giantkin.

“You there!” he growls in orcish at the orc, “Did you not hear my master? Quickly now, show him the way.”

Bible disappears around the corner, retreating from the opening door.

She thinks in response to Tenibor's question, "The kitchen oughta be straight ahead," recalling Quinn's description of the smell and placement of the chimneys. "The gianks'll be on to us once they've seen what we've done to the stoney fella in there. Best we get someplace outa the way, an' the kitchen seems like the place unless we want to barge in on that feask."

Staying in the back of the group, Bible looks up and around at the trophy heads mounted on the walls to see if she can spot anything unusual about any of them.

Valda follows behind the others, ready in case combat breaks out. She doesn't speak the orcish tongue, so she leaves the attempt at deception to Jack and Eoghan, instead keeping an eye out for any other dangers.

The orc stopped short of pushing his way through the doors on the north-east wall. He looked about as if seeking someone who would give him permission to speak, and finding none, he answered, ::East wing, south room. Cross the great hall.::

He indicated through the doors he was heading for, both because he wanted to go deliver his bread, and because that was the direction.

Valda and the others rushed around the corner before a giant stumbled out into the hall behind them. In the room the others were laughing at him, saying, ::Watchit ya don't peeve the Stone!::

Bible scanned the walls, looking for clues (or loot, if she were honest with herself). Her eyes came to a dwarf's head, mounted on a block. Dwarves had once been common in these hills, she knew, but they had been gone for a hundred years. She had only met a few in her travels. It seemed very sad to see one mounted on a wall.

Nothing struck her as particularly valuable, though.

Hearing the giants coming out, Eoghan glaces back down the hall ot the room they left. With a short gesture and a touch to his pouch, he cast a voice back to the wall of the Stone Giant's room, as close to the door as he could still see.

::That's it, I'mma goin' to kill the next one who interrupts me!::, errupts from the wall in Utharn's voice, somewhat muffled as if coming through the closed door.

Avoiding the distractions of dwarf decor—that really should be in a cabinet, so you don't have to look at it all the time--and the giant on giant trickery, Tenibor pays careful attention to the place the orc server is entering.

Are there giants, are there many giants, in a feast perhaps? He tries to listen. When and if the doors are opened on the other hand, he will try to be less visible (nothing would better complement a dwarf head...)

Jack barks back in orcish, “Very well, off with you then.”

He quickly translates to the others mentally, then adds ~So it’s either to the kitchen or the feast hall. Either way it’s likely to get ugly. I vote for the kitchen once the orc leaves.~ However, he also spares a very quick glance through the doors when the orc passes through them.

Down in the south hall, the bullied hill giant reached for the guest room door. Then a voice, very much sounding like the stone giant emissary's assistant, said ::::That's it, I'mma goin' to kill the next one who interrupts me!::

The giant hesitated. He stood motionless in the hall for a minute or two, and then returned to the room where the others were waiting for him and he told them, ::Twas nothin'. Stone joost put his rock-guy in his place, like yoo said.::

The orc nodded to Jack, and he moved through the double-doors. When they opened, Tenibor caught a brief glimpse of the great hall before ducking out of sight:

The doors opened into a vast, smoky hall, filled with noise and rank odors. Six log pillars and a web of blackened rafters supported the ceiling, which reached its apex forty feet above. A great fire pit dominated the hall, over which roasted an ox, two sheep, and four pigs impaled on spits. Around the fire pit, hill giants laughed, shouted, wrestled, and joked with one another.

To the left (north) of the fire pit stood a long trestle table cluttered with haunches of meat, chunks of cheese, bread, and clay mugs. Around the table were five occupied chairs, three against the back wall and one on each end. Presiding over the chaotic din from the middle throne-like chair covered with furs, was a monstrously fat hill giant, who appeared to be half-asleep. At the close end of the table, a stone giant picked at a plate of food. At the far end, a cloud giant was in conversation with a hill giantess on the chief's left. On the chief's right, sat another large hill giant.

Empty barrels, crates, and chests littered the hall - more plunder from caravans and villages. The orc hustled to add the bread to the table, already crowded with food.

So 5 lead giants? ~5 main giants, including our stone giant emissary and presumably his cloud giant equivalent. But there are also other giants in the great hall.~

~It is quite festive. No signs of a halfling~ 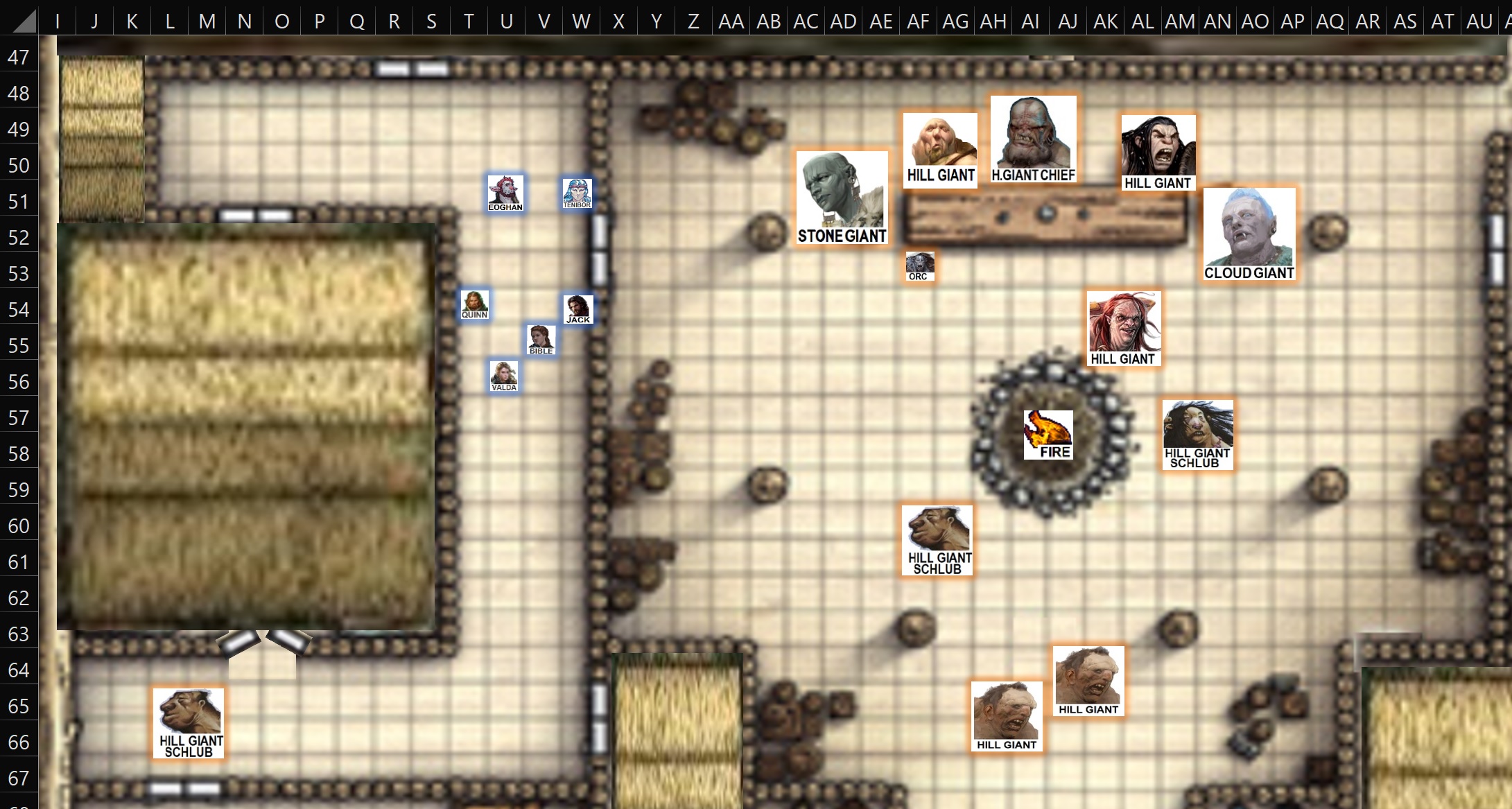 An image of 10 giants in a room flashes through everyone’s mind.

~<The Skyejotun is even higher in the Ordning than the Stone - if we go in there, it should be with a plan that's not a straight fight. Perhaps convincing the ambassadors to watch if Chief Nostra is strong enough to be a worthy ally. We know their names, Laerthar and Thyffon. Or we can head back outside and skulk to rooms on the other side. Perhaps Thyffon has something written down.>~

On entering the great hall: ~It may not be a straight fight. But it will be a fight of some kind.~

~If we don't go through the hall, those doors to the south will presumably take us back to the ogres and sleeping giants. Or there is the kitchen.~


As if gripped by madness, Tenibor will break off and head directly to the doors across from where the orc came out (O51). He will listen, trying to determine if this is a different room then the one with the 4 or so giants.

"I am for Jack's suggeskion of headin' for the kitchens," BIble mentally whispers. "We can fight an unwinnable battle against skoney gianks and cloudy fellas once't I've gotten me friend outa this predictamink."

She continues to guard the group's rear flank and watches cautiously for the approach of any giants.

~Clearing the kitchens will buy us some time - but not much. We can then plan our next step, maybe coming in disguised as orc servants and the big one as a giant youth. Can then hit them hard when they least expect it.~

~I need to find out if Azbar is part of this delegation…and soon,~
he adds more to himself.

Tenibor arrived at the new set of doors in time to hear the giant return, make his excuses, and be belittled by his comrades. It was the same room with doors on both ends, occupied by three or four giants. On the other hand, by the raucous din coming under the doors on the north wall, that way was most certainly the kitchen, being worked hard by some as-yet unknown staff.

~Kitchens may the easier fight, at least, and give us other options to bypass the great hall~

We should probably stop standing here. If Jack leads to the northern doors, Tenibor will follow.

Jack nods at Tenibor. ~Right then. Be prepared. Let’s get this over with,~ Jack conveys to the others as he quickly moves towards the kitchen doors. He then crouches like a cat near the west door, waiting for a signal from the others they are ready while he pulls out Darling. ~Hey big guy, you wanna continue your ruse with the rest? Maybe act as if our delegation got lost. I can cover our rear and shut the door before things get messy.~