Big Fella gingerly held the tablet and read it to everyone over the mental link that Tenibor had set up.
Last edited: May 20, 2022

There are two tablets? If there is one outside the chest, Tenibor would take a look.

He will also scan the room for any anomalies, or places that other interesting things might be stashed.

Actually, did the giant have a bag?

To the Quinn of the Crown, speaking quietly: "I am hurt, though not mortally" (7 dmg, staying at the lowest HP in the party).

The giant, Utharn, had been scratching on a tablet when they arrived. When Tenibor had a look around his (now utterly ruined) bed, he found that tablet and two more. Unlike the slab that Eoghan was reading, these runes were in a clerical short-hand. Tenibor was able to gather the gist of it - these were many notes on various past raids: successes and failures; enemies destroyed vs giants lost; loot taken or burned. While the information would be useful in the long-term to an analytical mind, there was nothing there that could help in their current situation.

(Helps to pay attention to the thread).

Any idea, even the kind of name that could be?

Tenibor recalled that the Stone Giant Thane Arnak of Howling Crag had a sister by the name of Belastraya. Legend has it that she slew a mother Roc, took three eggs, and hand-tamed a Roclet. (One of the other two eggs failed to hatch, and the other she gave to the Thane, who ate it for breakfast).
Last edited: May 20, 2022

Quinn can recall that I suppose (though Tenibor got the 23 history check).

TerraDave said:
Quinn can recall that I suppose (though Tenibor got the 23 history check).
Click to expand...

Quinn surveys his companions noting that several looked injured. He then concentrates on the healing starlight he stored in his ring of power. The healing light falls down onto Tenibor briefly before moving to Valda then Jack.

Quinn listens to the information found on the tablet.

So there is more here then just raids by these hill giants. There is some form of alliance going on and a larger plan. We will need to investigate this further.

After the injured took turns stepping into Quinn's healing starlight, Jack peeked out the heavy door into the dimly-lit hallway. The thick logs of the interior walls muffled a lot of sound, but he doubted that no one could have heard the sounds of their battle.

The walls of the hallway were similar to the walls of the guest room - covered in trophies. Furs and skins; man-sized weapons, tools, and shields; heads of various beasts and monsters; and hill giant "art" (crudely made from bones, twisted metal, and wood reclaimed from man-made objects).

Across the hall, there were a pair of double-doors, made from heavy wooden beams, just like the guest room's door. He was sure that he could hear muffled voices speaking loudly in the giant tongue, but he could not make out the words.

Jack motions to the Big One to step towards the doors where he is standing and listen. ~Across the hall - hear those voices? Can you make anything out? Quickly now.~ He crouches to accommodate the giant-kin's head above him while he continues to peer out through the ajar doorway.

Eoghan fortified himself with a deep hum, centering himself, then quickly crossed to the double door Jack was at and placed his ear to it. Any words he heard he mentally repeated.

Eoghan listened at the door. He could hear at least three, perhaps four distinct voices. They were arguing loudly.

::Sounds like dey stopped. I bet da Stone was fightin' wiv his rock-guy. ::

::Nah. He was jus' yellin' attim fer being stoopid, like we all do to Hubber.::

::Yoo look! Yer da biggest! Stone may not like us lookin'!::

There was the sound of laughter and thumping and Eoghan imagined some kind of game of keep-away. 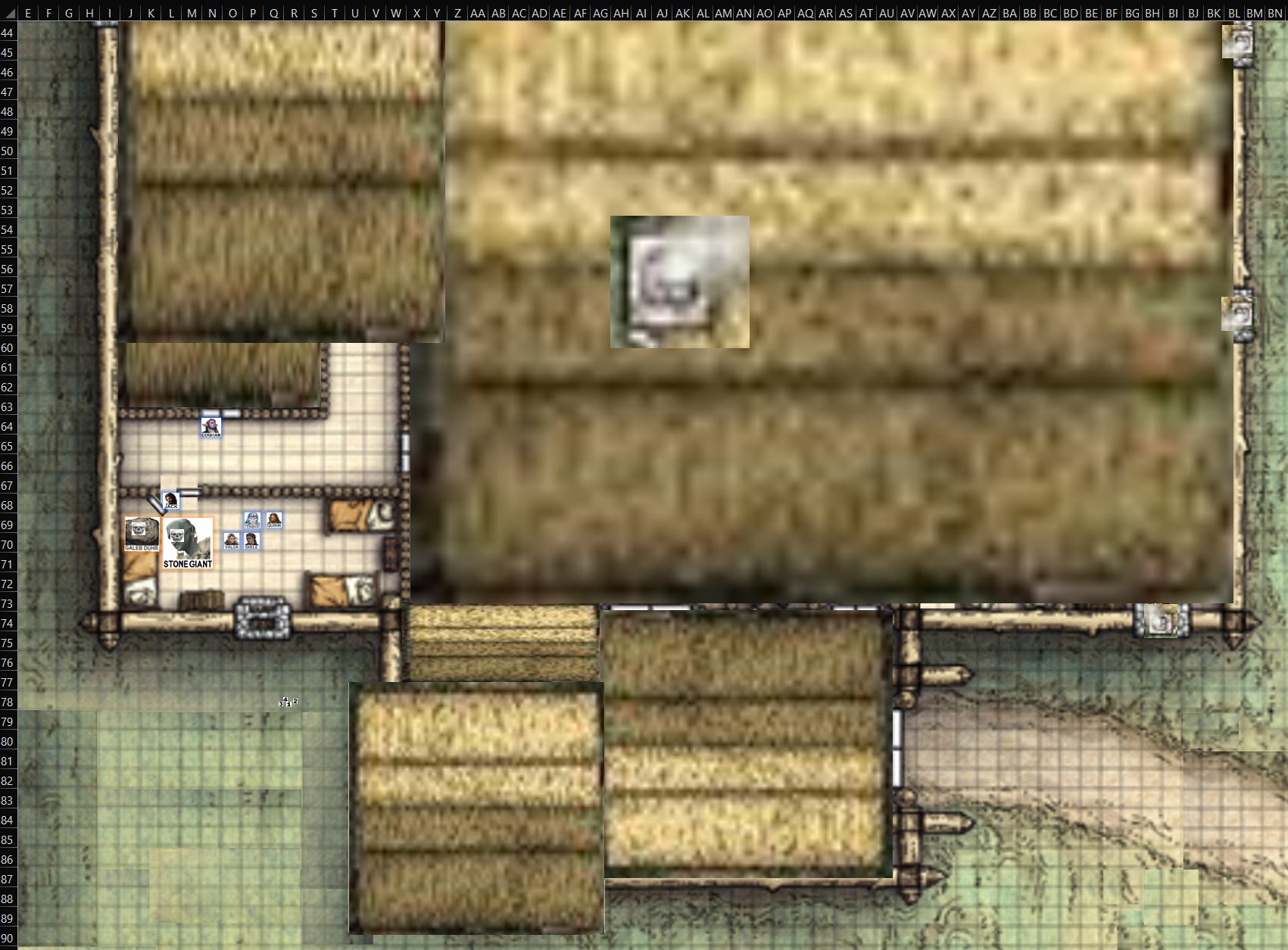 "How 'bout we gets to movin' before those big palookas can slow us down," Bible suggests telepathically as she pokes her head through the doorway and looks down the hall to her right. "Didn't one of us have some sneakin' magick that I recall?"

If Bible or someone else leads to the other doors (not the ones we are hearing behind) or down the hall (if that is possible) Tenibor will follow.

Otherwise he will get ready for more giants.

~it was Quinn who made us step so lightly~

~<Either move now and lock the door behind us, or prepare to fight.>~

Again the difference between the Firbolg's hesitant and self-effacing Common, and his commanding thoughts in Sylvan make themselves known.

~<If we must fight - and I'd rather not for no purpose - try to get them to bunch up in the doorway. Then I can do something to all of them. If any freeze do not attack them.>~

Eoghan takes his own advice and moves to the corner, peering cautiously around.

~Alright then, let’s move,~ conveys Jack to the party. He then sneaks out along the south wall while watching both doors in the hall.

Bible brings up the rear of the party, watching in case the hill giants come out and attack from behind them.

Eoghan went to the corner and peered around to another long, dim hallway, its walls adorned with the trophies of the hill giant's victories. The hallway doubled back on itself in a backward "C" that went around the room with the arguing giants. While the others quietly shut the doors to the stone giant's guest room and hastened down the hall, a door to the far north opened, and an orc carrying an enormous basket of large loaves of bread came out. He came down the hallway and looked directly at Eoghan.

He paused only for a moment before hoisting the basket onto his shoulder and heading for a door on the eastern wall, as if one strange-looking and smallish giant were the same as the rest to him.

Bible lingered to protect the rear as the group made their way forth. She was not far from the door to the arguing giants' room when the door began to open inward. 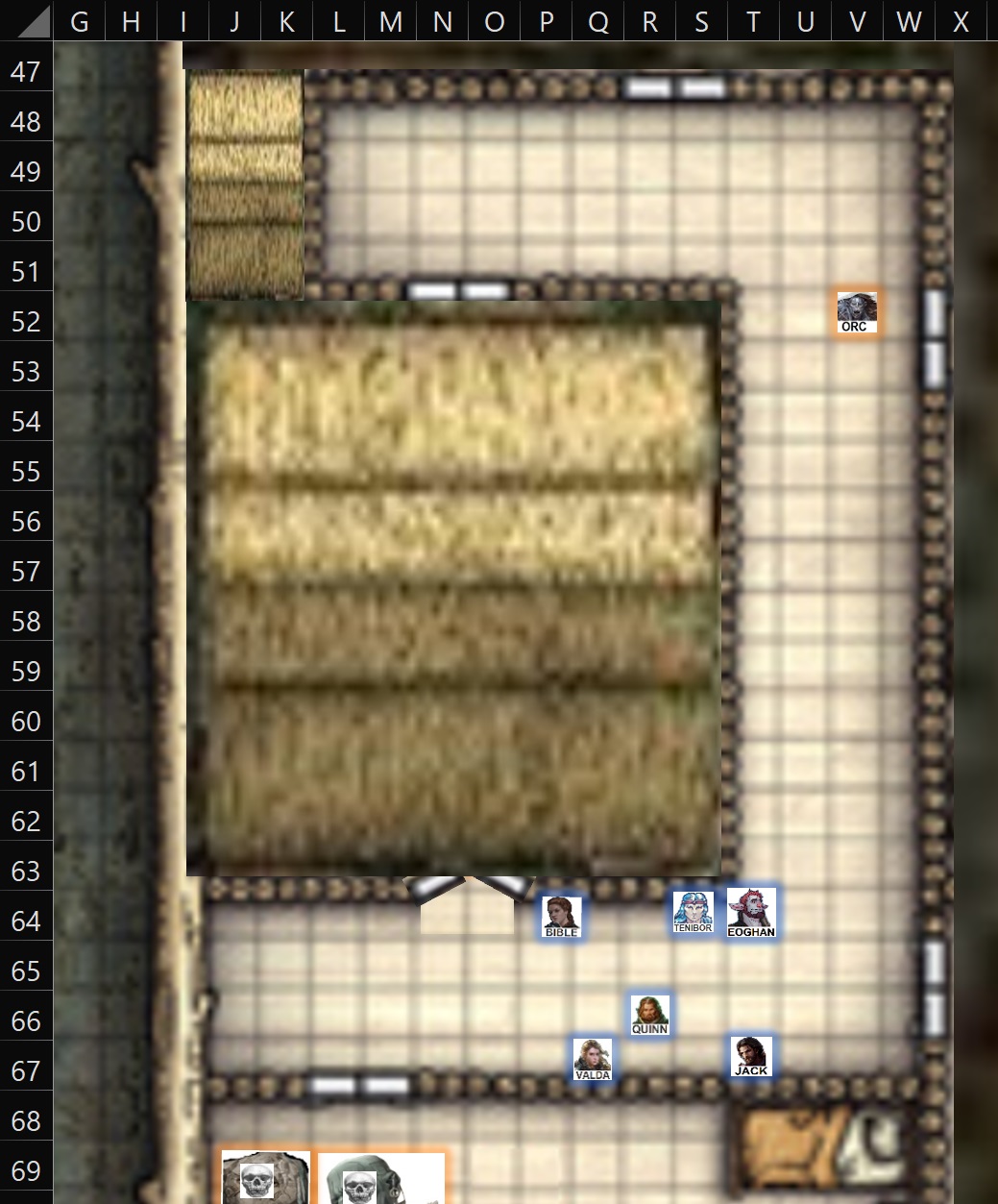