The end still tolls for the stylish stone giant. (Including the brazier attack.)

(Toll the dead, cantrip. Wisdom DC16 for half (with potent cantrip). Damage 18.)

Though the giant was able to defend himself against bible by swinging the brazier's chain across her sword's strike-path, he took a quarrel from Jack's crossbow high on his thigh. ::Rogho! Assist me!:: he bellowed.

Suddenly, the door swung in, knocking Bible hard from behind. (OOC: dc21 Str (Athletics) check or she's pushed 10 feet). Outside was a wide hallway, dimly lit. A wide, stocky boulder-like rock creature was trying to force its way into the room.

Still able to feel some of the burning embers from the brazier she had been struck with, Valda wants some retribution, again attempting to attack the giant.

Quinn hears the giant bellow and watches as the door bursts in. He raises his sickle and makes some gestures reminiscent of a flame and speaks an incantation. At the completion of the spell a burst of light and heat flare up as a fire springs to life under the new threat.

"@*!$&% $%*&!" Bible exclaims as the brazier's thick chain nearly wrenches the sword from her grasp and the door suddenly slams into her.

::Whoa there, Rogho, I ain't no pushover!:: she yells out in Hill Giant as she digs in her feet and tries to stand her ground.

Bible managed to hold her ground and she held one of the two large doors nearly closed. The stone-creature could not fit through to get into the room and it struggled, reaching around the door. Quinn sent a small flame that grew into a full-on fire under the creature, and it stomped at it uncomfortably. Then it seemed to hum a deep rumbling sound that Eoghan recognized as a very old note, with layers steeped in old earth magic. Suddenly stones from the fireplace fell out onto the floor, rolled, then twisted into four miniature versions of the elemental creature. They acted on its behalf, rushing in to defend the giant.

These may have been small compared to the giant or the big elemental creature, but they were still big stones that rumbled across the floor. Most of the group were able to hold them off, for now, but one struck Tenibor hard in the shin while the elf mage conjured another durge-like note that shattered the giant's determination. Valda did some fancy footwork, avoiding a rolling rock under her while she thrust her longsword at the giant and avoided his swinging chain. She plunged her sword deep, and the giant fell to the ground with an enormous thud. 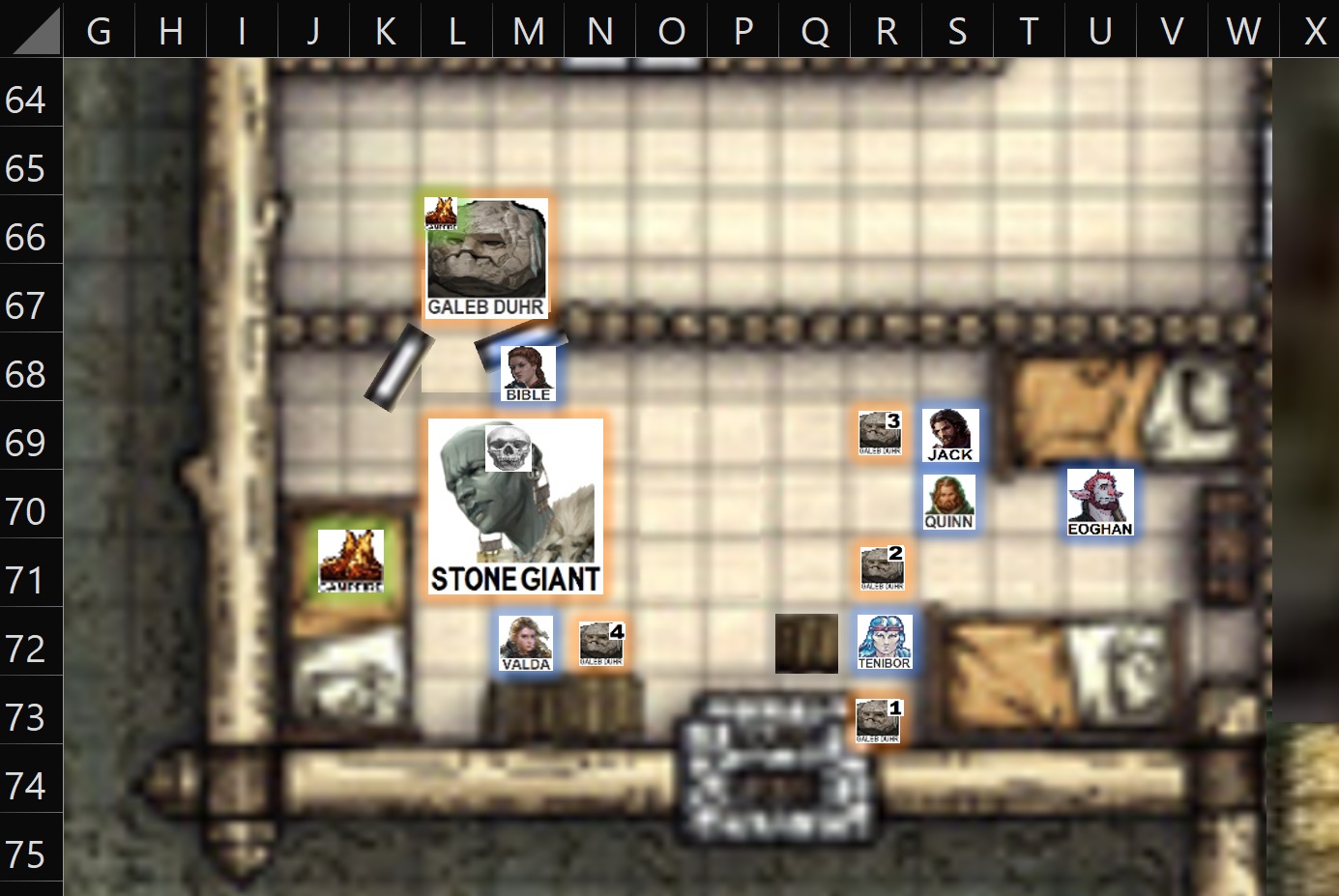 Jack curses as one of the boulders from the fireplace rolls towards him. ~What fowl magic do these giants command?~ In a flash, he drops his crossbow and draws The Knife. "What I'd give for a sledge right about now," he mutters to Quinn as he slashes at the rock creature in frustration.

Jack's knife sparked harmlessly off the back of the smaller rock-creature as if it were simply a fireplace stone, and not some strange elemental monster, which suddenly leaped up and cracked him in the head before falling back to the floorboards with a thump.

As a free action he will ask himself: what in Hades are these things!? What sort of attacks can hurt them?

Tenibor was understandably frustrated, having been struck in the shin, which hurt, and the thing was about to come at him again. He thought about what he could observe about its animation, and his knowledge of elementals. It seemed the creature had cast some elemental animation magic on the stones. They should be able to damage them through magic means, with a decent strike at the right time.

Eoghan's thoughts spun out loud to everyone, the first darting, frantic and searching but then rising in joy ~<Shatter - too loud. Hypnotic pattern - too big, it will get some of us. Wait -- that note, what was it?! There was soot, that was an active chimney -- they likely aren't real. Summons or animated perhaps. So -->~

Finally a full fledged though was sent: ~<We get the master!>~

The tall firbolg started to stride across the room, his first few steps were confident but otherwise normal. It was the next ones that took him past the boulders that were extraordinary. He strode as if he not only owned the room, but as if the very boards of the floor owned him personal allegiance. A presence came over him, more akin to the stillness when the faerie decide if you honor or insult them than any human-like authority. He marched forward with an imperious tread, and slight bow invited Jack, then Quinn and Tenibor, and finally Valda to move also, as if nothing else would dare at this very moment. A fae invigoration came upon them.

The firbolg kept this up for three, four, five of his long paces, and then the room shifted back to normalcy. He was just a tall humanoid walking again, whatever otherworldly mantle he had worn gone. But it's aftereffects lingered.

He finished the walk, half climbing over the fallen stone giant to get a view of the giant stone past the door.

<Though art ill-mannered and ill-formed, no proper obelisk one would find in a henge. Rather an overgrown pebble cleaved from a tombstone instead of a monolith>, he says in vitrolic Sylvan. <And I hope this works.>

Tenibor understands the dilemma of the bard, and the proposed solution. He appreciates the wordy magic that lets him get away from the killer rocks.

But still: This had better work.

After using his reaction to get away from the flankers, the wizard uses his move on his turn to climb up on the stone giant, in a way where he can see, but still has cover from the rock-fiend outside just outside the room. The rock fiend can have all sorts of cover in turn, it matters not, just as long as Tenibor can see a bit of him.

Tenibor draws his wand and unleashes 4 bolts of unerring force energy at it.

Eoghan led the way across the room. The rocky creature in the door was reaching around with a rocky fist, trying to smash at Bible, who was pushing against the door, keeping it from being able to get fully into the room. Bible was also using the door as an extension of her shield, shoving it into the creature and holding it back.

Eoghan climbed over the giant's corpse and mocked the stony thing, and it seemed as if the little ones cried out in pain. Tenibor followed suit, striking it with bursts of force from his wand. The small stone creature chased him across the room and struck him from behind, but his last force burst rattled the larger creature, and all four smaller ones turned back into inanimate rocks.

Tenibor has looked better. But at least it did work.

(Next attack that hits, he casts shield)

Seeing the tide of battle turn, Bible steps into the open doorway and tries to plunge her magic sword into the stone-creature's rocky hide.

As her blade is turned aside, Bible, worried that either the creature or the noise of battle may summon other foes, sheathes her sword and tries to grab the creature with her gauntleted hand and pull it into the room if she is successful.