The rock-creature was shoving against the door when Bible let go, and the door swung wide. She grabbed the thing as it stumbled forward and in spite of its massive bulk, dragged it into the room. Behind her on the floor was the body of the dead giant, and she was forced to stumble around it to her left, leaving her back to the burning bed, which had grown quite hot.

Like all sailors, Bible was sensibly wary about fire. But she had spent time skirting around lava floes on volcanic islands and time below decks in the tropics when the cook had soup pots boiling. In other words, she could handle the heat. As she yanked the rock-creature into the room she stopped short of falling onto the burning bed.

"Ah, bloody nine hells." Valda mumbles as she surveys the situation after the giant was felled. A strange rock monster, and a growing fire, either that could alert the giants of the stedding. Making a snap decision, she heads to the fire, attempting to douse the flames with the water in her waterskin before tackling the other problem in the room.

Quinn drops concentration on the fire he just created letting it burn out. He then sends another bolt of starlight towards the rock creature. The sudden movement of the creature caused the shot to strike where it had been rather than the creature itself.

Valda managed, by emptying her waterskin, to get the fire mostly under control. The enormous straw mattress was wet, smelly, and full of burn holes. There was still a small fire burning near the far corner (where Valda couldn't reach) but it would be unlikely that it could spread quickly.

Quinn fired a bolt of starlight at the rock-creature, but it bent low over Bible, struggling with her, and the shot went over. 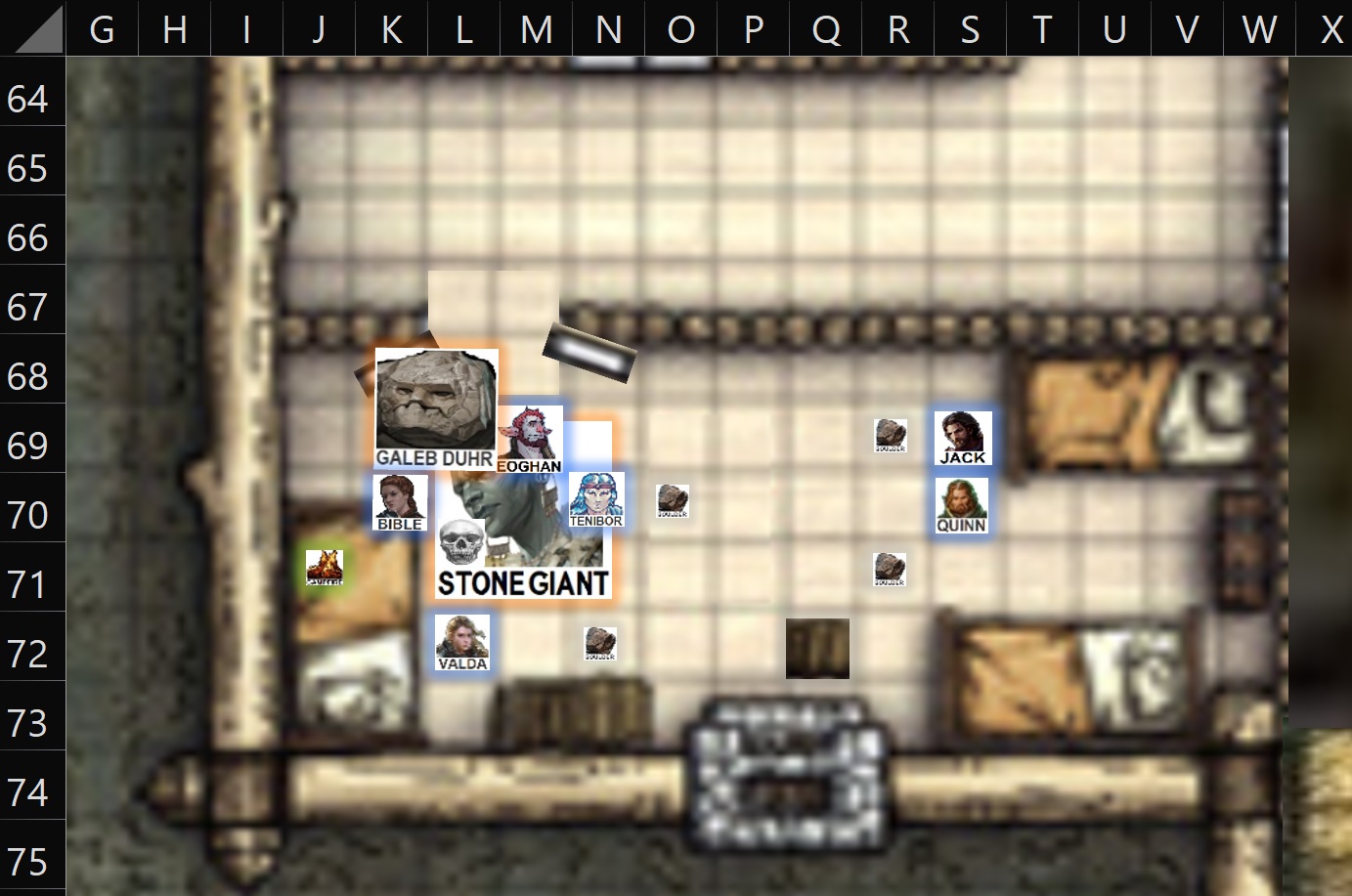 With the fire under control for now, Valda drops the waterskin and rushes at the Galeb Duhr, sword drawn. After the first strike, the rune etched into her sword sparks, and flame runs down blade, wrapping around the stony creature, trying to shackle it down.

With a sigh of relief as the rock creature in front of him becomes inert, Jack swiftly sheaths The Knife and picks up Darling, his magical crossbow. He then moves back towards the fireplace to get a better view of the larger rock creature before pulling the trigger.

~This better work.~ He thinks to himself and the others.

The firbolg intoned with seriousness in Sylvan, <Thy strata is inferior, thy insides crumbly, and you do not bring me joy.>

He then again prepared to utter part of a Word if needed.

OoC: The GD was damaged in the last round.

Feeling a bit awkward now on top of the giant, Tenibor will step down (one to the right).

For this things death, he will toll.

Valda climbed over the dead giant, rushing at the rock creature. She invoked a rune that shrouded it in flaming chains, that shackled it to the floor. This gave Jack the moment he needed to fire a quarrel from Darling, his favourite crossbow. The quarrel punched into the creature's chest, leaving cracks forming around it.

Eoghan mocked it, and tried to use his magic to stop it from escaping the fiery bonds, but break free it did, though it took all its efforts. Tenibor climbed off of the giant's body and tolled the deep durge once more, which caused the cracks to lengthen.

Unable to drag the rock-creature over the giant's body, Bible crosses the foot of the bed, pulling the creature away from Eoghan and into the corner of the room where she releases it from her grasp and draws her sword.

::Sit in the corner -- you been a bad boy,:: she remarks as she moves to the right around the creature, interposing herself between it and Eoghan and striking at it twice with her sword.

Quinn steps closer to the rock creature. He then speaks another incantation gesturing with his sickle in a whip like motion. As the spell completes a thorny vine whips towards the rock creature wrapping around it magical thorns gauging into it's rock hide.

Bible turned the rock creature loose in the corner of the room and drew her sword in a quick motion, stabbing through its thick rocky hide. The cracks in its chest widened. Finally, Quinn sent a magical whip made of thorn-like stars, that wrapped around the creature's arm. When Quinn pulled, hoping to throw the creature off balance, the arm (and half the creature's chest) came off and dragged across the bed, tearing through the burnt mattress. The other half fell the other way, bumping into the wall with a loud crash.

~Let's get those doors closed,~ projects Jack to the others, while striding towards the east wall of the room. ~This chest looks like it needs a little attention.~

After a quick search of the giant's body for keys and finding none, Jack set to work on the giant-sized chest on the eastern wall. The others closed the doors and stamped out the last remnants of the bed-fire (and collected the brazier's other scattered coals, which were easily scooped up with what was an iron hand-scoop for the giants, but was a large shovel for the humanoids.) The scoop had hung from the mantle, along with a large fire-poker. The fireplace was missing a few of its largest stones, but its integrity seemed essentially intact.

After a few minutes of searching, Jack hadn't found any traps, so he shrugged and began to work the lock. Using his largest tools, he deftly manipulated the oversized pins until the latch sprung and he carefully opened the chest. There was room enough for three man-sized creatures to sit comfortably inside. Jack dragged out a heavy, folded giant-sized greatcoat, pushed aside some giant-sized travelling gear, and found his prize: a sack containing gems and coins of various sizes and currencies. His quick head-math estimated the worth at just over five-thousand in standard gold coins. In addition, there was a stone tablet, similar to the one that Utharn had been scratching on.

Laerthar, my love,
Go to the hill giants. Help Nosnra plan his raids. Make
sure he does not lose sight of our greater goal. Do this for
your thane. Do this for me.
-Belastraya

Eoghan poked his head over Jack's shoulder, curious. He restrained himself from rudely grabbing the tablet from Jack's "workspace", but he did cran his head about trying to make out what it said.

Jack squints at the tablet. He can recognize some of the characters, but it's definitely not orcish.

Noticing a shadow looming over his shoulder, he passes the table back behind his head. "Maybe you can make sense of this big fella," he whispers to the chanter.

He then stands, holding the sack of gems and coins in the air to show to the rest of the party. ~Unless anyone objects, I'll keep this safe in my pack for us to split up later.~ He then moves back to the doors to listen before peaking out to see if the coast is clear.