Eoghan turned toward Tenibor and barked out in a hard tone unlike heard from the firbolg before: ::The portal was sloppy, we disturbed this one. We will deal with this later.::

The firbolg bowed his head to the stone giant before continuing ::As you say mighty Utharn, we are lower than even our hill cousins in the Ordning -- a fact making any call folly to ignore, even when just whispered. But by that same ranking, it surprises me that Laerthar and, dare I pronounce his name, Thyffon, would be here. Why would one of the Skyejotun lower themselves?::

~<I could ask this giant of stone to bring us to the feast hall and introduce us as emissaries from the feywild. They would know of us, but if we are careful might be able to find out all about their plans and then sneak away. But we have less than an hour before this one knows he has been charmed. Or, we may take him out and continue infiltrating while they feast.>~

~I say enough talk. We got what we could outa this fella, and it's time for him to take a long nap,~ Jack conveys to the others.

With his back still leaning against the large chest, The Knife quietly pulls out his crossbow and places a bolt in it...

While his attitude was still friendly, the giant was beginning to ask Eoghan questions that would eventually prove difficult to lie about. It was obvious to Eoghan that there was a lot of complex giant-related politics involved, and while this assistant to the stone giant emissary seemed to know a lot of giant politics, he either didn't know much specifics, or wouldn't speak of them to a lower caste. Either way, they had what they could get for now.

Now it was time to end this, as quickly and quietly as possible. 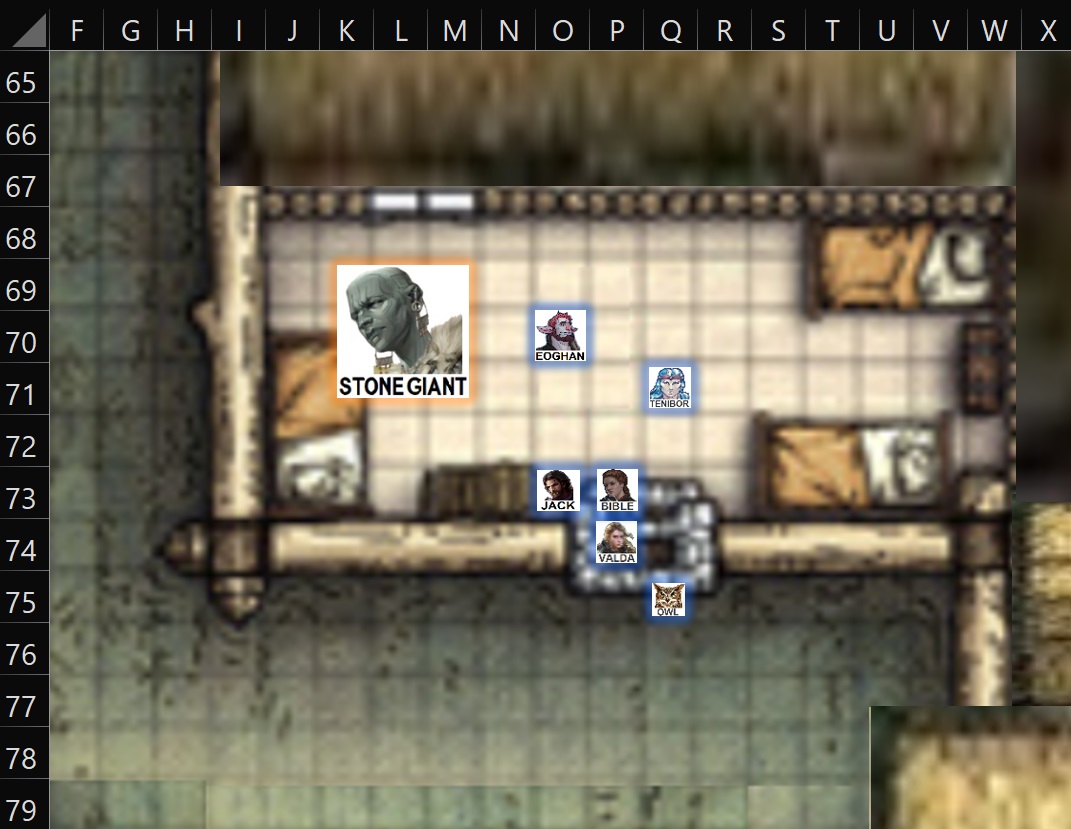 Eoghan strolled away from the stone giant toward his "retainer", each pace counted to get what he thought was outside the grasp of the giant's long arm.

He turned towards the giant twice his height.

::Utharn, you sheep-eyed second-fiddle excuse for an observer. You aren't fit to carve into mince pies. I am done with thee.::, along with a discordant chord on the bandore to lose an empowered jape that enraged the target, basic for any trained lorecaller.

He then backpedaled even more, watching the giant closely and ready to invoke a syllable of a True Word if need be to shift reality a touch.

As Jack quietly loaded his crossbow, and Valda arrived safely (and quietly) in the fireplace, Eoghan made his shift, wandering away from the giant, he suddenly played a discordant note and insulted the giant, who stood, suddenly silently enraged as the charm spell ended.

Quinn hears the mental shout of now, swoops down the chimney pulling up just in time to avoid the hearth and mantle. He soars into the room flying to the right side away from the giant. As he nears the beds he drops his animal form landing on two feet. At the same instant the druid raises his sickle and speaks softly. A point of light grows at the tip of the implement and streaks towards the giant striking it and sheathing it in a faint glimmer like star light.

Hearing the chanter's command, Jack grins. He then expertly dodges out of the giant's reach to take a position between the two beds (and conveniently, next to the large chest). Aiming his crossbow at his quarry, he is momentarily distracted by an owl swooping out of the fireplace and into the room.

~What the...?~, he spurts mentally before realizing it's Quinn, who transforms beside him and lances the giant with a bolt of magical energy. His smile broadens as he lets his bolt fly at the now glowing target.

Drawing her gleaming longsword as she emerges from the fireplace, the Reeve crosses the room in front of the giant and takes up a position between the giant and the door.

::Sorry Utharn,:: she says with a distinctly hill giant accent, ::this is the end for you.::

Raising her shield to guard herself against her taller opponent, she thrusts upward at the giant twice in quick succession.

But those giant size beds, and those earings...oh well.

~The woodpile that is not a woodpile is still in front of the hearth~ he broadcasts to everyone, including Jack.

Not that it will matter much. This should not take long. He will take a step back to R72.

The end tolls for the stone giant.

(Toll the dead, cantrip. Wisdom DC16 for half (with potent cantrip). Damage 16. Edit: this assumes that the giant got hit by at least one of those attacks )
(Tenibor has also used 1 2nd level spell for Misty Step).

Valda rushes out of the fireplace, taking an opposite side to Bible to help corral the giant's movements. She takes some quick swipes at the giant's legs with only the slightest of grins on her face.

An owl burst out of the fireplace and became Quinn, who shot the giant with a glowing bolt of starlight, which surrounded the giant in a twinkling sheen. Jack dove from behind the woodpile to a safer distance near the far wall and fired his crossbow, which struck the giant square in the chest.

"Betrayer!" bellowed Utharn, still speaking only to Eoghan, "I knew one who treats with so many small folk could not be trusted!"

He reached for his club, but quickly became surrounded by Bible and Valda, who lay into him from both sides. The giant's head was high enough that he had to stoop under the support beams, some twenty feet up. He reached out and unhooked the iron brazier that hung from a beam and swung it from its chain like a flail, spilling hot coals around him that began to set fire to his bed.

He slammed the heavy brazier into the wall over bible's head, and then swung it around, dropping it on Valda. Eoghan tried to send a warning but it was too late, and the hot iron struck her, knocking her back a step. The blow would surely have crushed a smaller person, but Valda was every bit as tough as she looked and she only grunted and stepped forward. 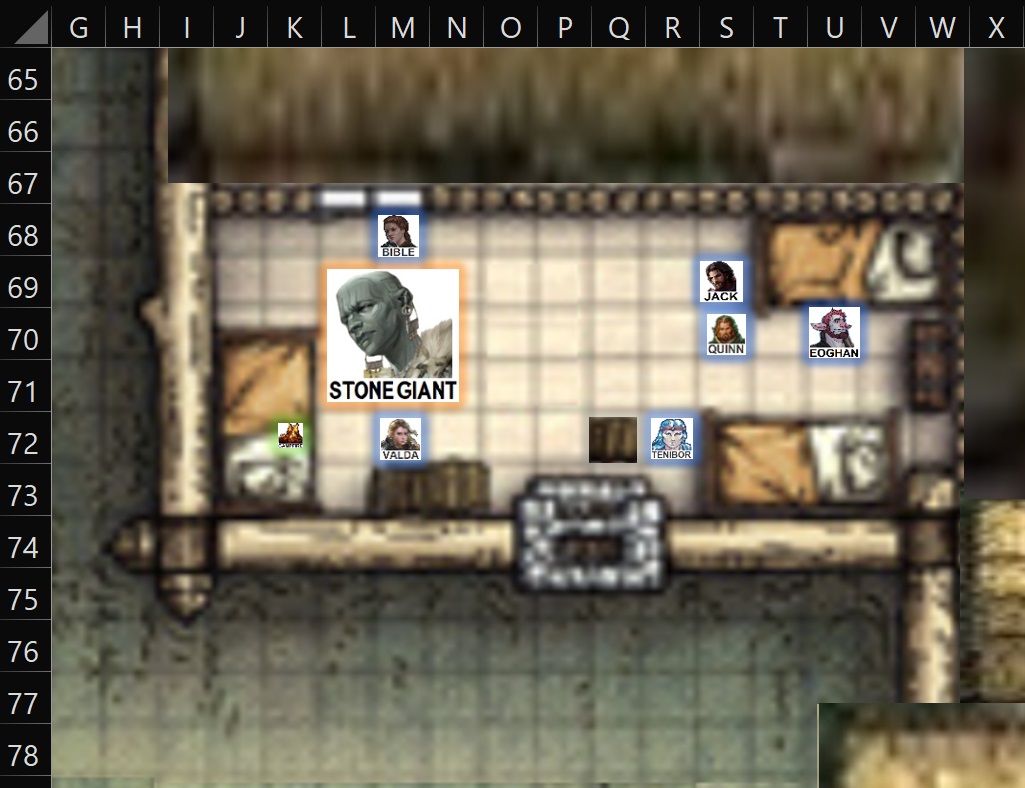 Encouraged by the stone giant's moment of uncertainty, Bible once again lunges in to stab him with her longsword.

Jack calmly, almost mechanically, reloads his crossbow. ˜The faster he goes down, the better.˜

::Slug-witted brute, thick thews does not make you better than anyone,:: Eoghan called out in his deep voice.

And again, he prepared to try to twist fate with a rightly timed syllable.