Jack stepped to the side of the kitchen doors and waved for the front-line to move in. The heavy doors pushed inward to a smoke-filled and odorous kitchen, with a packed dirt floor and two seven-foot-high trestle tables covered with pots, kettles and bowls.

Counters along the walls were cluttered with wooden utensils, jugs, mugs, and plates. Barrels were piled near the tables, and various cheeses, smoked meats, and sausages hung from the blackened rafters. Simmering in the hearths were two fat iron cauldrons overflowing with hot broth.

Between the tables stood a massively fat hill giant wearing a stained leather apron. The giant screamed instructions at a dozen orcs (a few of them, judging by their size, were half-ogres), who worked the counters in a frenzy of activity.

No one took particular notice of the door as it opened. 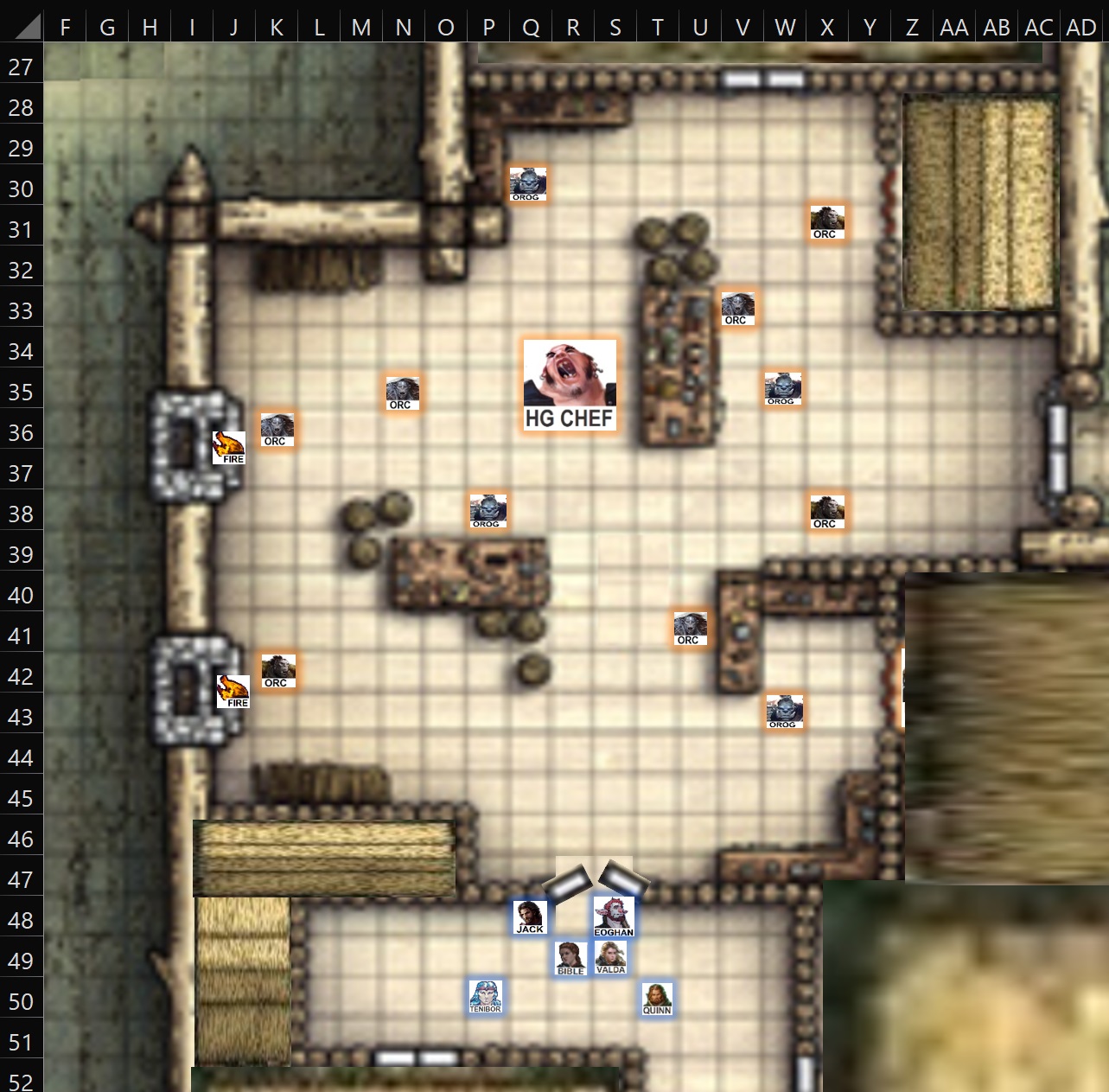 Are any of the orcs armed--besides kitchen knives--do they have armor? Do they look like beaten down servers?

~We may have to focus on only one big target here~

The little giant didn't hesitate and called out.

::Hey, Chef! Sly Gulla said that whoever cooked was a weak-jawed lout who shouldn't feed wolves. I suggest you go smack them upside the head with your ladle and show them who's boss.::

Even in his brief overview of the kitchen, Tenibor could tell that it operated through a top-down bullying system. The chef would bully the orogs, who would in turn bully the orcs. By their grubby, broken appearance, Tenibor could tell that the orcs were indentured servants, perhaps even slaves. There was little sign of the proud warrior tradition that characterized the orc tribes that were the longstanding enemies of his people.

Aside from the hill giant chef's heavy leather apron, the kitchen staff wore only canvas and quilted garments, which would offer only slight protection in a fight - more meant for protection from heat than from swords. There were many knives about (including, hanging from the chef's belt, a massive meat-cleaver) but the staff was essentially unarmed.

Eoghan stepped forward and made a bold suggestion to the chef, who answered, ::He said dat!? We know who ta blame, don't we? It was yoo!::

Most of the orcs looked at the ground, lest it be them, but a few looked at one orog in particular, who spun toward the chef and cringed, his hands held high in protest. Just as Eoghan had suggested, the giant took a heavy ladle from his apron and struck the orog, who staggered from the blow.

::Must be a pain with the Stoney and the Cloudy - how long you hafta be feeding them? They stayin' much longer? Bet they don't even like yer cookin' as much as the Chief do. Mebbe play a prank on them.::

The firbolg's cadence and style fell close to the giants in the other room, his speech mimicking theirs.

Tenibor moves into the kitchen and calls out in giantish ::Foul Brute! The time has come to destroy the giants!::

~Right, so much for subterfuge,~ mutters Jack as he aims around the doorway and fires a bolt at the chef.

Quinn doesn't hesitate when the others attack. He speak the words of a spell gesturing towards the center of the room. As he finishes the incantation a black writhing mass of biting insects well up from the floor. The mass of locusts quickly engulf the hill giant and spread outward to do the same to any orc or orog nearby.

Bible makes directly for the chef, retrieving a handaxe from her belt as she moves into the room.

::Anyone tries to cook me halfling friend has ME to deal with!:: she shouts as she hurls her axe at the giant.


You don't want to take it back? (I mean casting the spell, not her move).

VLAD the Destroyer said:
You just moved into my Insect Plague spell. Not sure if you realized it is concentration and you will take damage if you do. If you decide to enter the spell you need to make a dc18 Con save. If you fail you take 21 piercing damage half on a save
Click to expand... 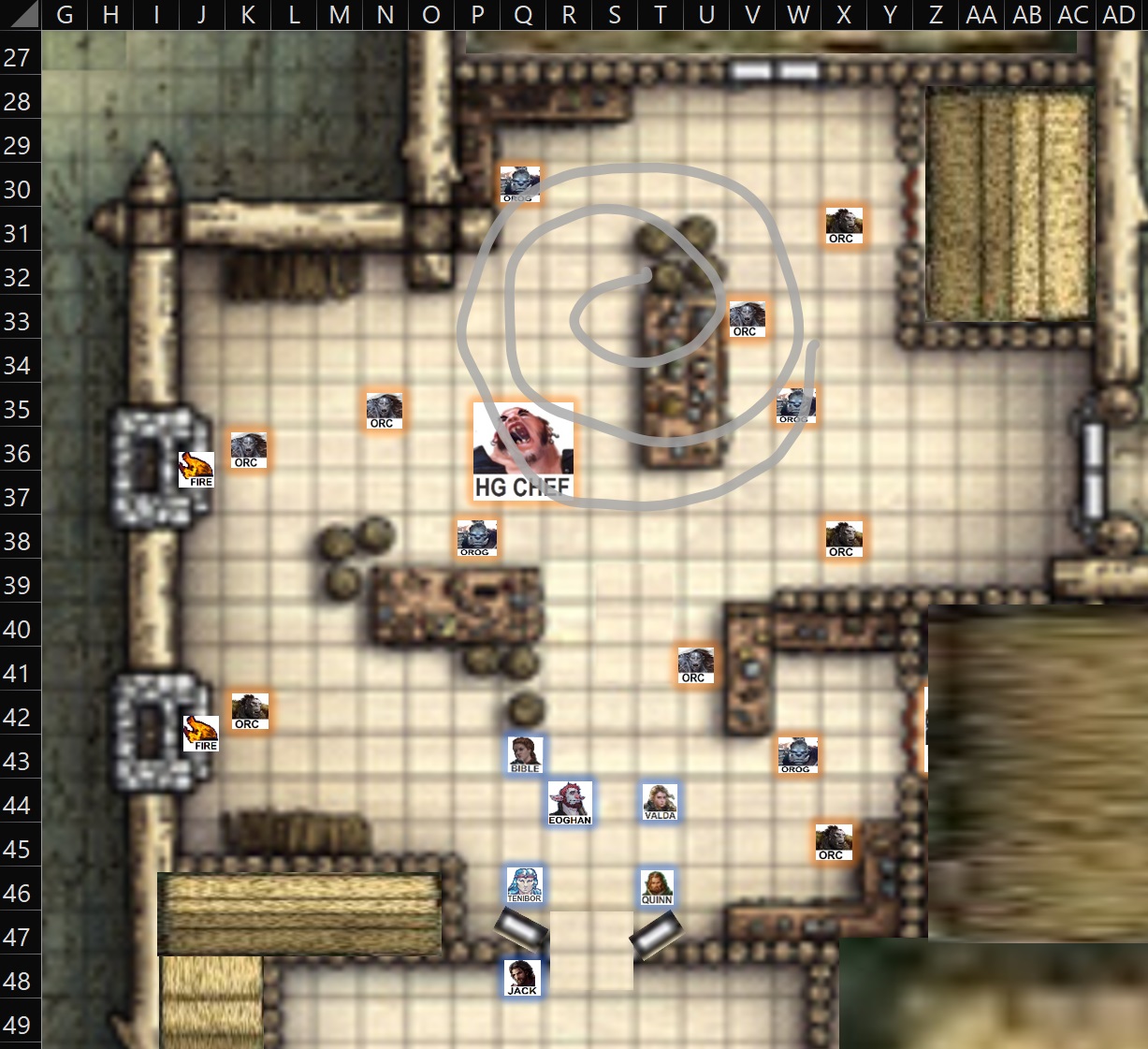 There were several giant-sized utensils in the Chef's heavy leather apron. Though Tenibor's wand's force bursts and Jack's quarrel struck true, they must have gone through something in his pockets, for the giant only grunted and began to grow angry from the blows.

Then Bible ran up and flung a hand-axe at him, that struck him in the eye-brow leaving a welt (before landing with a thump on the dirt floor).

Valda huffs at the Chef's comments towards them as she calls on one of the runic tricks she has learned. Runes flicker with power and she grows, nearly doubling in size, both height and girth. With this newfound power, she strides towards the orog and orc to her right to block their path towards the group, and strikes at the orog with her sword.

The hill giant chef dropped his ladle and grabbed a meat-cleaver with a blade that was a two-foot square. Quinn chanted and gestured at the middle of the kitchen and a mound grew on the dirt floor. Suddenly, the mound burst open and locusts poured out, covering all surfaces and creatures in the immediate area. The chef hollered, ::Ugh! Geddim off!::

The giant's back was covered in locusts as he rushed out of the swarm toward Eoghan. Bible stepped in the way, and received three solid blows of the meat-cleaver, which she did her best to fend off.

The orogs in the locust-swarm managed to get out of it alive. One ducked into the north corner of the room, brushing himself off, while the other fled for the door to the courtyard. The orc fell to the floor and was reduced to a skeleton in a matter of seconds.

The orog who the chef hit with his ladle got over his embarrassment and began to throw plates - these were heavy things, large and made of dense clay. They smashed on the ground between Tenibor and Eoghan.

Orcs stood around in confusion, or at best, moved toward the corners to stay out of the way.

Valda grew large and moved to the right, to defend the party against the closest orog and orc. The orog went for a large kitchen knife, and Valda stabbed him with her longsword while he hopelessly thrust his knife into her shield. A large heavy curtain in the wall to the east opened, revealing a pantry stuffed with supplies. A fat hill giant came out carrying a four-hundred pound bag of flour. She shrieked when she saw what was happening in the kitchen and she swung the bag of flour at Valda, who blocked it with her shield.

The bag tore and flour burst in a cloud, covering Valda, the orog, and even reached as far as Quinn. It was hard to breathe and even harder to see as it slowly settled onto everything.