Jack patiently reloads Darling and fires again at the bedraggled houndsman. "Now stay down!" he exclaims as he turns his attention to the other hill giant.

Taking cover behind the corpses of the unfortunate dire wolves, Quinn sent healing to revive Bible, who lay on the ground coughing blood. Eoghan stood to his full height and spoke in a tone that was both commanding and at the same time reassuring, in his deep rumble. The allies were able to rearrange themselves and regroup, while Eoghan sent a loud bang that harmed and disorganized the ogres.

Yet still, out the door they stumbled, shaking their heads to clear the ringing in their ears. The Houndsman yelled, ::Some un go raise d'alarm! Rest of yoo get t'stompin' smalls!::

One of the youths took off at a run. He seemed for a moment to consider going through a door to the south, and then, thinking better of it, ran for the eastern gate. The other ogres charged forward. One reached Valda as Bible retreated, and slammed a club into her shield. The others threw a volley of javelins that rained down around Eoghan, Quinn, and Bible. One struck Quinn in the foot, piercing his boot.

Tenibor boldly crossed a bit of the courtyard and cast a spell that made Valda move with haste.

::Ged dat wizzahd!:: The houndsman yelled at the other giant before raising his axe to attempt to bring down Valda. As he did, Jack shot him under the armpit.

For a moment it looked like the quarrel hadn't bothered the giant, who brought his axe down as Valda quickly blocked with her shield. Then a perplexed look crossed the old giant's face. His axe fell out of his grip and he reached up to feel under his arm. He gave one long wheezing cough, and fell forward. Valda (her movements swift with Tenibor's spell) side-stepped as the giant's great bulk crashed to the ground between her and the ogre.

Tenibor did not have time to celebrate their small victory. The other giant rushed toward him, leaping over the body of the fallen giantess. The elf wizard ducked and covered and by a very narrow margin avoided the giant who landed belly-first on the ground beside him.

Bible feels the grip of her sword resting just under her fingertips as healing energy fills her body and revives her into consciousness. Hearing the strains of fey music floating on the air, she leaps to her feet, firmly holding her blade, and moves away from the band of ogres approaching from the east, putting her back to the carcasses of the dire wolves lying slain in the courtyard.

Hriston said:
Bible rises from prone and moves to AM-30 using her reaction. Given that we aren't using initiative, does she get to take a turn this round, or is it considered to have passed before she was revived?
Click to expand...

Valda sees the giant topple after barely deflecting the giant's axe, and sees Bible slowly rise to her feet. She might not be the brightest, but she could see the problem they were in, as the ogres started to amass outside to the right of her, and to the left the wizard, Tenibor, being assaulted by the last hill giant. Cursing under her breath, she made a decision, charging the giant with her newfound speed, hoping Bible could, and would, retreat back away from the ogres before they overtook them.

With blinding speed, she struck out at the giant, pushing herself to her limits to injure, to fell this lumbering oaf.

Valda turned from the ogres and ran to help Tenibor. In spite of the body of the houndsman between them, the ogre was able to reach her with his club, and he hit her in the back as she turned away. The blow could have crushed a less experienced person, but Valda rolled with it, keeping her momentum moving until she left the ogres behind. She furiously stabbed at the giant, her motions a quick blur that had the giant holding up one of his hands and saying, ::Ah! Dis small is too quick-like!:: 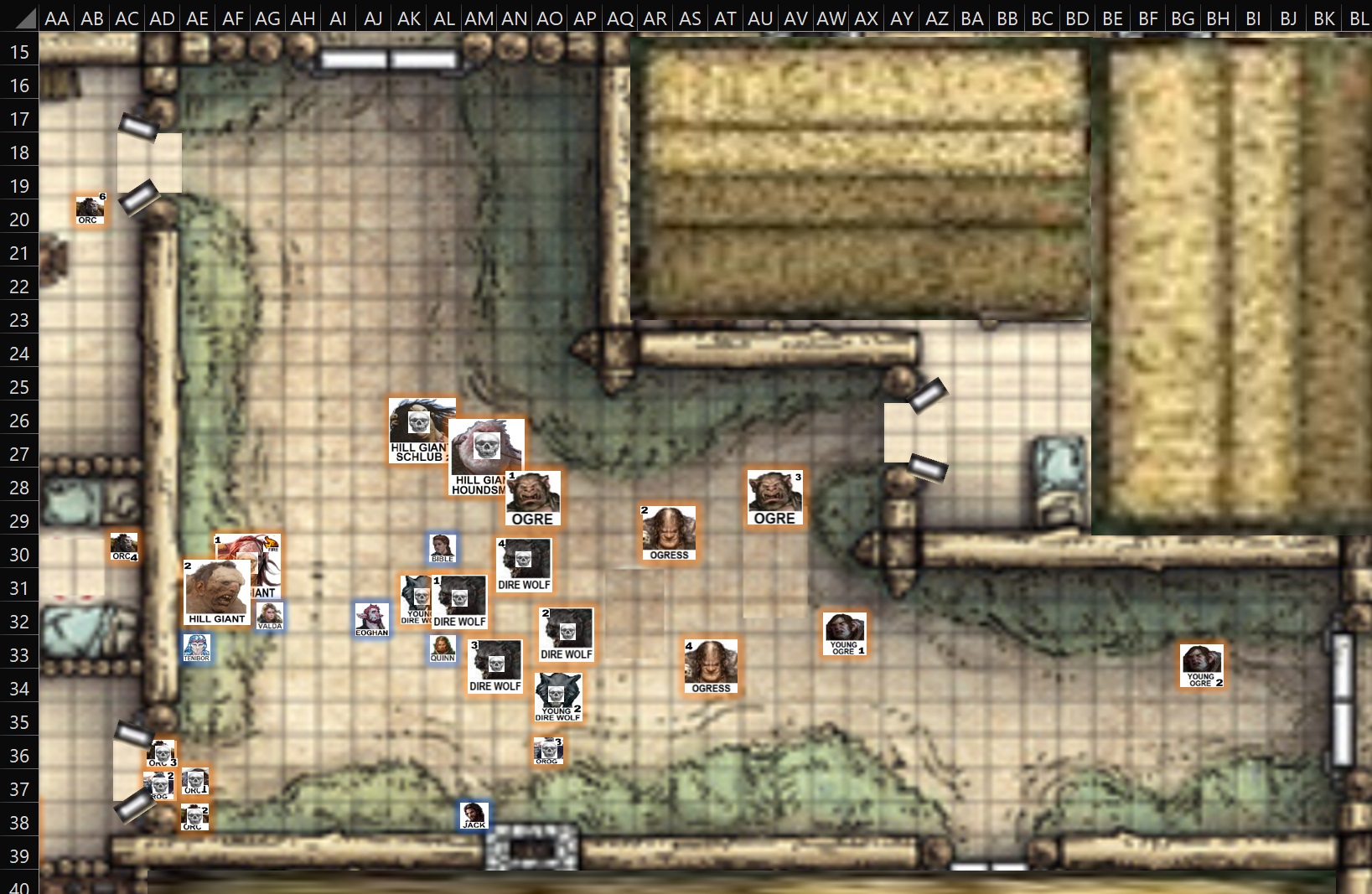 Not that Tenibor ever panics, but one could say that he starts to feel a sense of relief. Hopefully not too soon.

And there are reasons he has lived this long.

(OoC: uses last 3rd level spell to fireball 4 and if possible 5 closest ogres. 28 dmg. DC 16 half. Ready to use shield if attacked, luck reroll if concentration may be broken)

~<Third time's the charm,>~ Eoghan let slip over the mental link as he prepared once again to attempt to hypnotize a group of opponents.

The flashes and sounds were almost familiar by this point, but for the ogres caught in them still potentially mesmerizing.

He then projected his voice so the running ogre youth could hear, ::Your family needs you, little one. Wake them and you can all go...::

Quinn watches as the young ogre runs to alert more of the fort.

We need to stop that ogre from alerting others.

Putting actions to words the druid sends a bolt of starlight at the fleeing ogres back. At the same time the life giving aura emanating from Quinn continues to heal Bible.

Jack sees one of the smaller ogres make a break for the gates and pivots his aim.

Blue said:
Eoghan had hit four of the ogres with an upcast Shatter, you resolved it in post #422. It doesn't look like their HPs were updated in the Round Start post. Just want to make sure that wasn't forgotten. EDIT: Also Eoghan and Valda should have their tHP back up to 8/8.
Click to expand...

Bible continues her retreat, putting the pile of wolf corpses between herself and the advancing ogres. Seeing her companions struggling with the last remaining hill giant, she releases her sword, letting it drop to the ground, and hefts an axe from her belt, hurling it with as much strength and speed as she can summon.