A spasm of anger passed across the thief's haggard face at the mention of retreat. Once again, vengeance would need to wait. Sighing, Jack turned his attention to the stupefied ogres while projecting to the others ~think we have time to take them out?~

Bible looks disappointed at having failed to find her halfling friend before it seemed they would be driven from the giants' lair. She warily eyes the steading from which she expects another barrage of giants to emerge at any moment and considers downing another potion before it's too late.

She moves around to the left of the incapacitated ogres towards the door of the outbuilding, thinking out loud to the others, ~I'll jus' take a quick look in the shed to see if me sweet Corbit is bein' kept prisikner or if she's well an' truly done for as I had feared, an' then we can go. No senske in us all gettin' killed.~

~<I still have a few of my best tricks if they come out. But after that I have nothing.>~

Bible dashed into the outbuilding, hoping to find poor Corbitt. The building was dominated by the ogre barracks - ten smelly straw mats under a twenty foot ceiling. Spikes were driven into the log walls, upon which hung cloaks, armor, spears, and other giant-sized tools. A second room to Bible's left was more lavish, and must have belonged to the houndsman. A wool mat by the fireplace must have belonged to his favorite dire wolf. In front of that was a comfortable chair. A bed was in the far north-west corner.

What caught Bible's eye, though, was a curtained closet. Bigger than the main room of the house that she'd grown up in.

Bible moves to the closet, keeping an eye open for hidden threats, and pulls aside the curtain.

Bible's feelings were mixed by what she found in the closet. While there was no Corbitt, there was a large chest at the back, hidden behind hanging fur cloaks, old shirts, and giant-sized boots.

A bit sheepishly Eoghan amended over the mental link: ~<But if I do need to pull out my best tricks, I would have to drop the beguilement on the ogres. Can you kill them - one at a time - please?>~

Nodding at the bard's request, Jack moves rather cautiously up to one of the affected ogres as Bible slips into the large outbuilding. Looking more closely, he notes the ogre is not defenseless - it seems at least somewhat aware of its surroundings, and can likely defend itself from attack. ~This may not be as easy as we thought,~ he thinks back to Eoghan. ~I might be able to take out some of the wounded ones with a swift strike, but would need someone to help distract them.~ He then walks to the door that Bible walked through to watch her back.

As Jack passed one of the ogres, she pointed, as if she wanted to see if Jack could see the pretty colors too. When he moved off to the outbuilding, she grunted and began to swat a hand at nothing in the night air over her head.

With her thoughts, Bible tells the others about the presence of the chest as she looks it over to see if it appears to be trapped in any way.

'I can help with the ogre killing. Here to be muscle.' Valda mentions offhand through the mental link. That said, she appears slightly on edge, constantly scanning the courtyard for oncoming danger.

Valda was ready to work with Eoghan on finishing off the ogres. Inside the outbuilding, Jack found Bible poking about at a chest in the closet. It seemed likely that the houndsman would have a key. Either on his person, or hidden somewhere in this room. 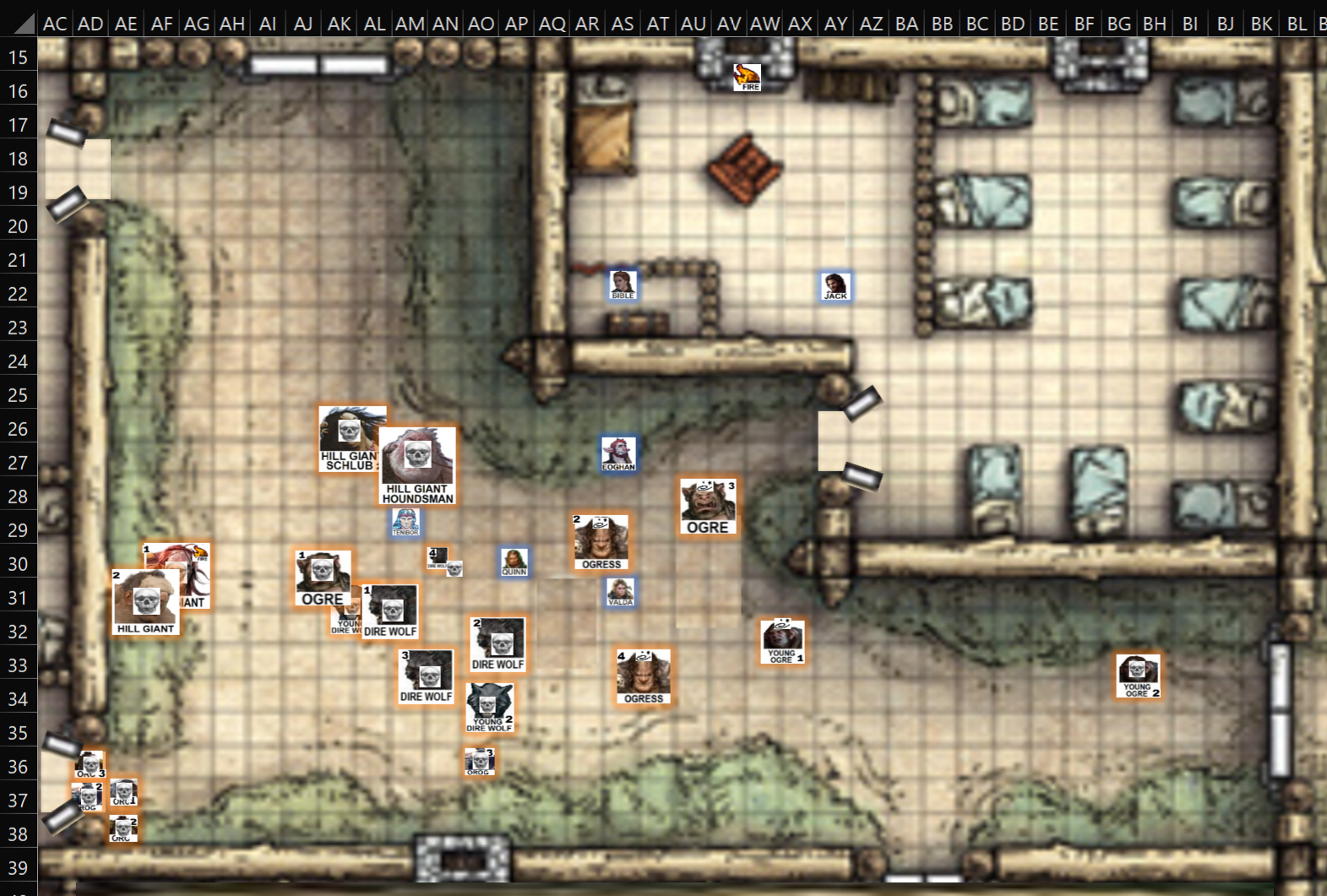 Tenibor carefully listens and looks for giants that might be coming their way or otherwise reacting while he slowly moves northward.

EDIT: He occasionally poses with the mallet as he does so. Unconsciously, of course.

Jack moves swiftly to Bible's side to inspect the chest for traps. His long years in the Guild guided his hands as he checked, all the while maintaining the mental link with the others.

~Someone check the houndmaster for a key,~ he conveyed while reaching for his lockpick set.

Even over Eoghan's mocking of the ogres, Tenibor could hear a few attempts by the giants in the watchtower to hit the alarm-gong with another object (a fist, a bone from a snack, or something along those lines, he assumed). None created the loud alarm that the mallet would have, and he prided himself in his foresight. If the occupants of the steading had not heard the sound of the courtyard battle, they would not hear the sound of that gong. He knew that it wouldn't be long, though, before they found a tool more appropriate to the task (or gave up and sent a runner).

Joining Bible in the closet, Jack looked over the chest. It seemed a simple affair, if oversized, with a big iron keyhole and a simple heavy double-hinge. It didn't seem like the giant was clever enough to include any kind of trap. A key would be quickest and easiest, but why wait? His largest tool would probably do the trick.

Jack pulled out his largest picks and inserted them carefully into the lock, using his keen senses to deduce the right pressure points on the tumblers.

Quinn assists the others in dispatching the ogres.