"Hopefully the scout is safe. In any case this may be our best chance to find anyone or anything of interest still in the Steading"

He looks at the Reeve then the Rogue as he says the last part.

By now, Bible and Jack had sorted and counted their treasure. In coins of varying denominations, origins, and vintage; and gems of various size, cut, and rarity (including a gem that was cut in the form of a coin, carved with a foreign prince's family crest, and used only in high-end shipping contracts) they had a grand total of 824.27 when valued in standard gold. In addition, one of the two gourds held healing potion - Bible recognised the smell (though this was worse - sweeter). The gourde was so large, that they could split it into four smaller vessels without losing potency. The other gourde was something of a mystery.

Tenibor comes over to the humans. Mystery gourde?

He takes a whiff. Its amazing, and he knows not only what it is, but how it was made and by who!

Jack stands as the wizard studies the gourd. Looking at first to Bible, then to the steading, he says quietly, "We need to go back. In there, somewhere, are answers. I mean to find them."

Then more loudly to the party, "Now if I were them, I'd have barred the courtyard gate - and left a few guards behind to boot. Maybe up in that watchtower." Turning his attention to the druid, he adds, "Any chance you can pull off that owl trick again to case the joint?" He then tightens the straps to his pack after carefully backing away the party's treasure.

"I think Jack has, erm, the right of it. We were told to find answers, and all we know now is a rough idea of the scope of it - not why they have banded together nor any details that will break them up.

"Also, before we get to the steading I can make one person fly or one person invisible. At least until I need to cast another spell."

Quinn nods to Jack. He agrees with the need to investigate the steading more. When Jack asks him if he can take the form of an owl again he nods a second time.

"Yes, I can take the form of an owl and scout the compound again."

Tenibor sniffed the strange liquid in the gourde. It seemed that Varrga had been taking "performance enhancing" potions to steel his reputation as a mighty giant. This was a potion of Giant Strength, made by the Cloud Giants of the Cumulous Citadel, to bring their non-giant minions up to snuff. To gain the potion's full effect, one would have to drink it's full contents - quite the task for a man-sized creature. On the other hand, prolonged exposure in small quantities might serve as well.

Cromby passed his spyglass around and allowed a few of the others to take turns at his lookout position behind a rocky outcropping. From there, they could see the north-east corner of the steading. A few orcs had survived, and they, along with a few grubby hill giant "schlubs", had piled bodies in front of the north and east gates, and set them on fire. The fires burned still (and probably would throughout the night). Then the gates had been closed, and presumably double-barred.

A somewhat surprising failure on the giant's part, was that their previous approach (using the outbuilding as cover from the watchtower, until they were able to sneak around the exterior walls) appeared to still be available for them to exploit.

"They may be good at bashin' heads," said Cromby while shaking his head and whistling, "But hill giants're not known for smarts."

The group made their way back down to the steading using the darkness, the outbuilding, and Quinn's pass-without-trace spell to mask their movements. They arrived safely, at the east gate, which was smoky with the terrible stench of burning bodies. Quinn morphed into the form of an owl, and flew overhead, nearly invisible against the night sky.

The courtyard was now guarded by five hill giants: Two large adult males wearing armour and brandishing axes (both much better made than hill giants were usually seen with) and three youths, wearing hides, carrying slightly smaller axes, and bristling with javelins. 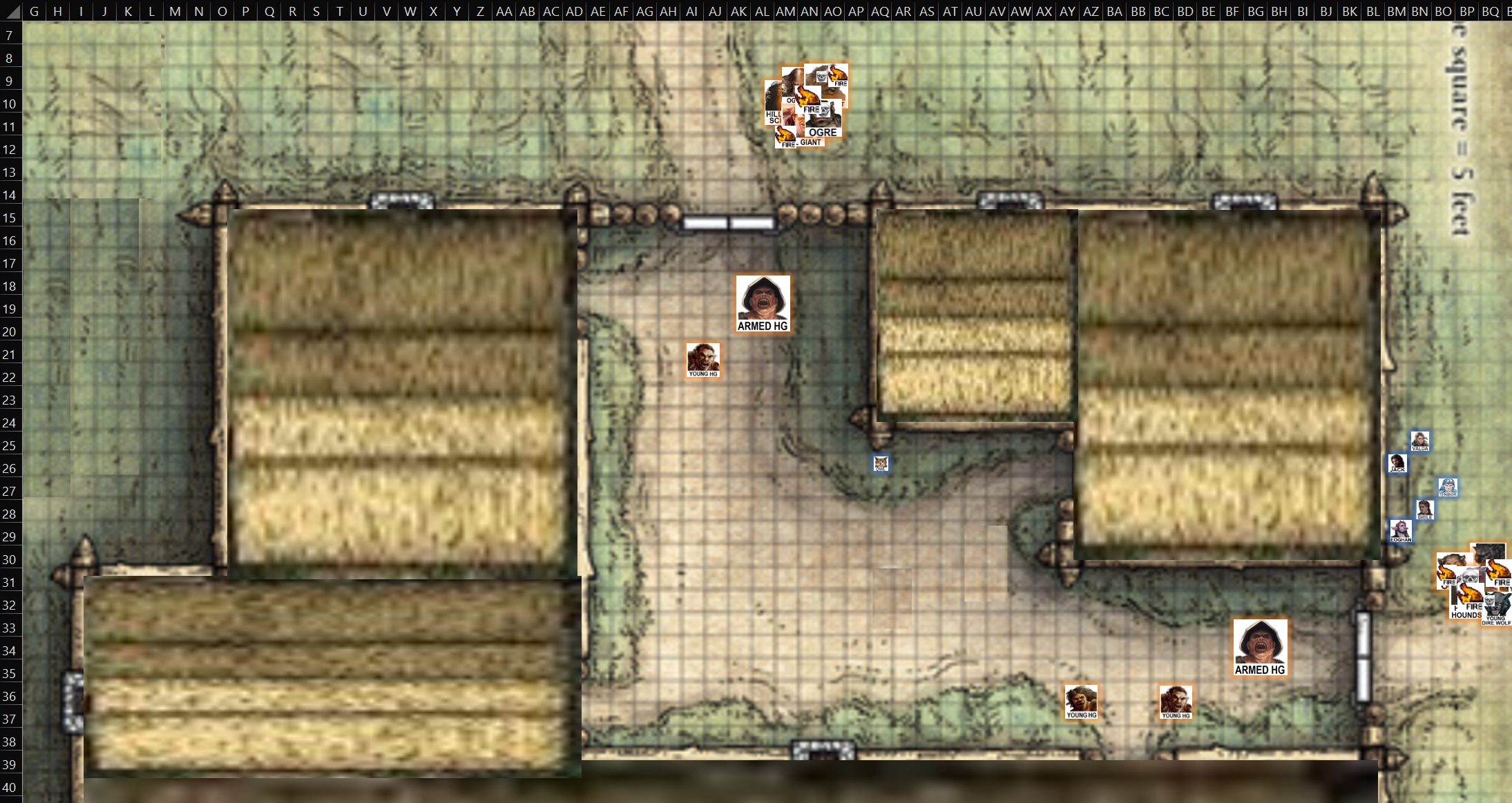 ~The mind link is active. This gourde gives strength~

~We should be mindful of our action and drawing attention to ourselves this time. Or killing possible allies, or sources of information.~


If there is to be any climbing, Tenibor will need help.

He looks at the gourde.

Upon hearing Quinn's report, Jack considers their options. Well versed in infiltration, nevertheless he had typically relied on his sister to do the planning - hence his hesitation. He considers the wisdom of the elf's words.

~I say we continue to the south and see if they left a sentry at the watchtower. Either way, the chimneys may be our best bet again to get in quietly. We need to find the chief's - or one of his guests - quarters. I'd bet my last shiny copper it's there we'll find more information.~

Suiting his words, he then creeps along the east wall heading south under cover of darkness.

Jack led the way south where Quinn flew around the watchtower and reported three giants. One was wearing an enormous greatsword on his back and was keeping the other two alert and ready - much different from when they were there before, with the lookouts sleeping on duty. Another had donned armour and an axe, much like the two in the courtyard. The third was alert, peering out eastward over the gatehouse, but she still only carried a club, like hill giants were known to.

These extra armaments were something new - not just tonight, but in general. Hill giants were not terrible skilled at craftsmanship. Not known for working metal. Their skills usually ended at basic sewing, woodcarving, and carpentry. Someone was arming them - and they were concerned enough by tonight's raid on the steading to use the armaments early. They had clearly not amassed enough of them to arm everyone, but it was quality work.

Much like earlier, Jack knew that the three in the tower were not the only guards on the south end. The gatehouse had ogres. While he couldn't see them, they would still be there. Perhaps bolstered by a giant or two.

~<If one of you looks direly hurt, I may transform them into a giant ape in full vigor. I know Bible's answer, would any of the rest of you be willing to accept this dweomer?>~, his voice much more confident in telepathic Sylvan than when he had spoke Common.

Eoghan listened to the report from the scouting owl.

~<I do not think we have a plethora of magics for large groups left. It will be a running battle as soon as they manage to raise an alarm. I say we go toward where the giants will be the most strung out running to us. The tower might give us a good choke point, and we could always exit to a chimney if they block us to well. But if we want to go in fast, I am just as good with that.>~

Lidgar said:
I believe we have pass without trace active, so assuming that would negate the disadvantage? Also, can you remind us which chimneys look clear of smoke? Thanks.
Click to expand...

Seeing the guards in the watchtower, Jack looks back to the north and to the two chimneys along the eastern wall they just passed.

~I think our best bet is to circle back around to the north and climb the chimney to the kitchens. Should be hidden enough from the watchtower, and if we're quiet, those lugs in the courtyard will be none the wiser.~