'Sounds like a plan' Valda thinks through the mindlink. She is not really the mastermind type, instead following quite squarely into the follower role, which she is perfectly fine with.

'I can help anyone up who might have difficulty scaling the wall.'

The group worked their way counter-clockwise around the steading, sneaking past both the east and north courtyard gates. They came down the west wall until they arrived at the kitchen chimneys. Having been inside, they knew that there was likely to be obstacles at the bottom - pots and their hanging apparatuses, cooking grates, hooks. But at least the fires were out. First, they had to get up to the roof, and they needed to do so without making any noise. The spell would help, of course, but it mostly masked their footfalls and caused the terrain to cover their tracks. It would not prevent the sound of falling, or knocking a stone loose from the chimney.

Jack surveyed the large chimney for obvious footholds and quickly scampered up. Once at the top, he pulled his trusty silk rope from his back and looped it around the chimney, finishing with a secure knot. He then quietly lowered it down for the others to ascend.

Nodding at Valda, he then slipped down the chimney and back into the cooking pot so to speak. Once at the bottom, he glanced at his surroundings before looking to clear a path for the others to descend.

While the others were working their way onto the roof, Quinn flew high overhead, keeping a silent eye on the courtyard. Jack slid silently down the chimney to have a look at what they would face there. He peered over a cooking-grate, careful to not disturb anything. Though the fires had been doused, the iron grate was still quite warm, and the sooty chimney was uncomfortably hot and stuffy after the cool night air.

Inside the kitchen, a gaintess lazily worked at the final clean-up after the recent battle by relevelling the dirt floor. She worked with a rake, clearing the area where a trestle-table had been, now gone. Quinn's locusts had destroyed everything there, and whatever had been left when the spell ended had either been burned with the bodies, or buried under the dirt.

In the southern part of the kitchen, a giant commanded a quartet of surviving orcs. Though the main feast was over, hill giants ate at nearly all hours of the day and night, and this group worked still to serve cold sausage, crusty bread, jerky, fruit, and drink, to whoever higher-caste giants remained hungry. 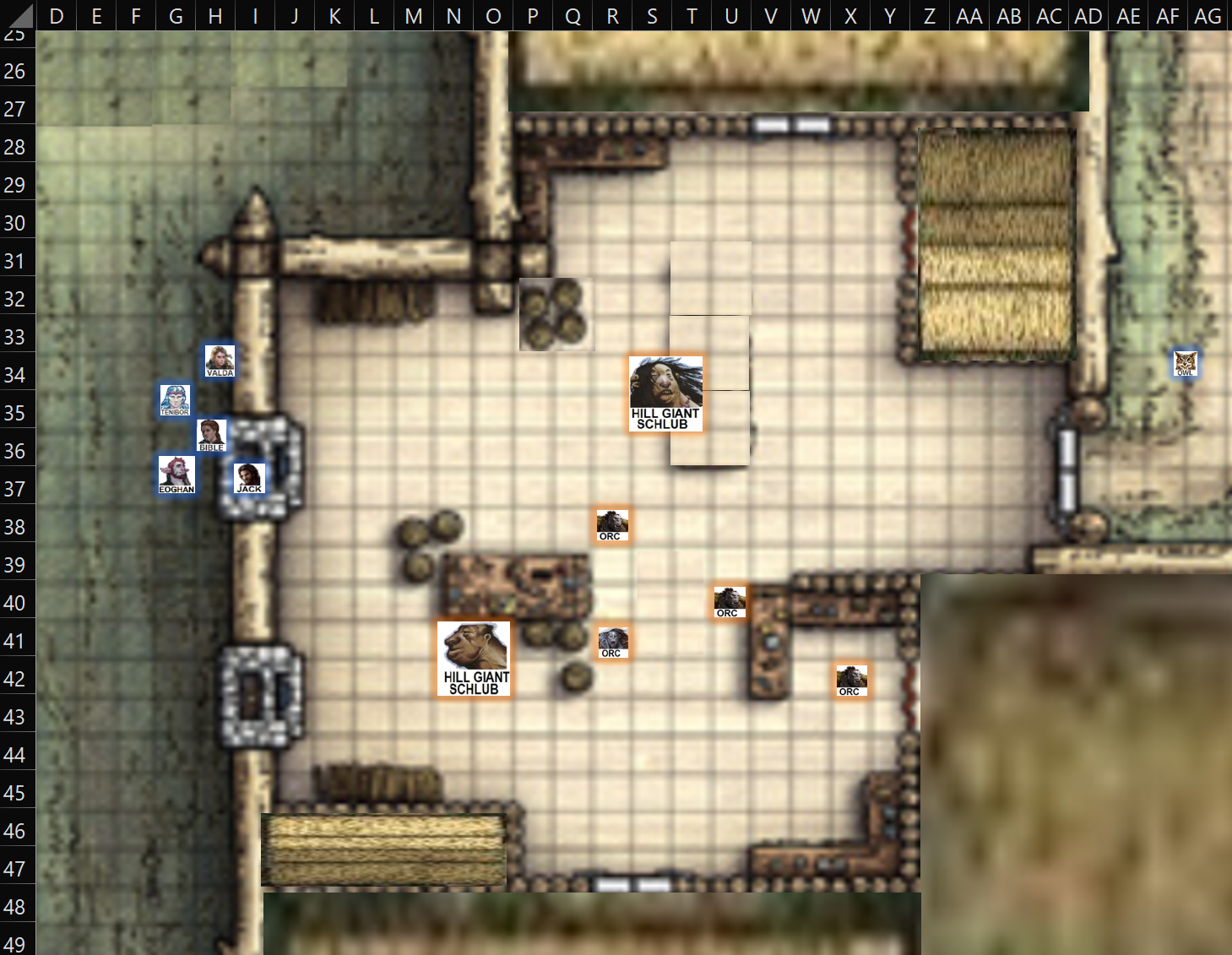 Jack surveyed the kitchen from the shadows of the fireplace and described the scene to the others via the mindlink.

~Two giants and four orcs. We’ll need to move fast to cover the exits. Risky…but we can do it.~

With strength 23 and a rope, and possibly while swinging around the mallet, Tenibor will climb up, then down.

Easily up.
Almost as easy down.

Tenibor drank two pints from the gourde. His first drink (which tasted strong, bitter, and not very pleasant) made him feel thick-headed, but not particularly strong. His second, on the other hand, made him feel mighty, and somewhat aggressive. He grabbed the rope and pulled himself up, hand-over hand, barely bothering to use his legs for anything but the barest of support. He arrived on the thatch roof and crouched to stay out of sight of the watchtower, which could be seen over the top of the main roof, but didn't have very good sight-lines in this direction.

Then, he pulled himself from the roof up onto the chimney, and hopped inside. He put his hands and feet on either side, and shimmied down to the grate, where Jack was waiting. It was a tight fit with the two of them inside. Thankfully, there were two chimneys.

FitzTheRuke said:
give me a stealth roll with disadvantage (because of, IIRC your 11 down out of a dc of 12.)?
Click to expand...

In any case, he is very quiet.

Eoghen did the same as last time, mentally psyched himself up to go with a bold internal melody, then climbed the rope. The trip up was without incident, but on the way down if it wasn't for the regular beat of that music in his head he would have lost his grip.

Valda holds off going down the chimney until the rest of the group has made it up the rope and down themselves, figuring that if needed her boots would be helpful in case something goes wrong.

Bible prepares to reenter the steading, bracing her feet against the chimney as she climbs the rope.

Once at the top, she carefully lowers herself down to the hearth, using her remarkable athleticism to alight as softly and quietly as she can.

~Ahoy! Let's keep 'em away from the entranks this time,~ she thinks to the others as she regards the orcs and giants.

With the exception of Quinn, who was still in owl-form and circling the courtyard, everyone was down, crammed into a single chimney and hearth with a large removable iron grate. Valda was last, and she stood above the others, her feet stuck to the inside of the chimney like a spider.

Eoghan had had a bit of trouble getting in (his belt had stuck on an iron pot-hook that was firmly attached to a stone, and he'd nearly pulled the stone free, but he kept his head, and calmly, silently extricated himself and slowly pushed the stone back into its place.

The kitchen staff continued at their work, oblivious to the sooty group crowded into one of their fireplaces.

Bible reminded everyone, with her sailor's charm, to remember to try to keep things from escalating, this time around.

Jack silently nods at Bible's suggestion. ~I can block the east exit to the courtyard if two of you cover the north and south. Just say the word when your ready.~

He then pulls out The Knife and whispers something inaudible, causing a barely perceptible sheen to cover it.

~<I will follow your lead. Tell me where you want me.>~ the smallest giant intones in their heads.

It was too hot and crowded in the kitchen fireplace to stay for long. They would have to make their move quickly, or they would be found out. It was time to go. 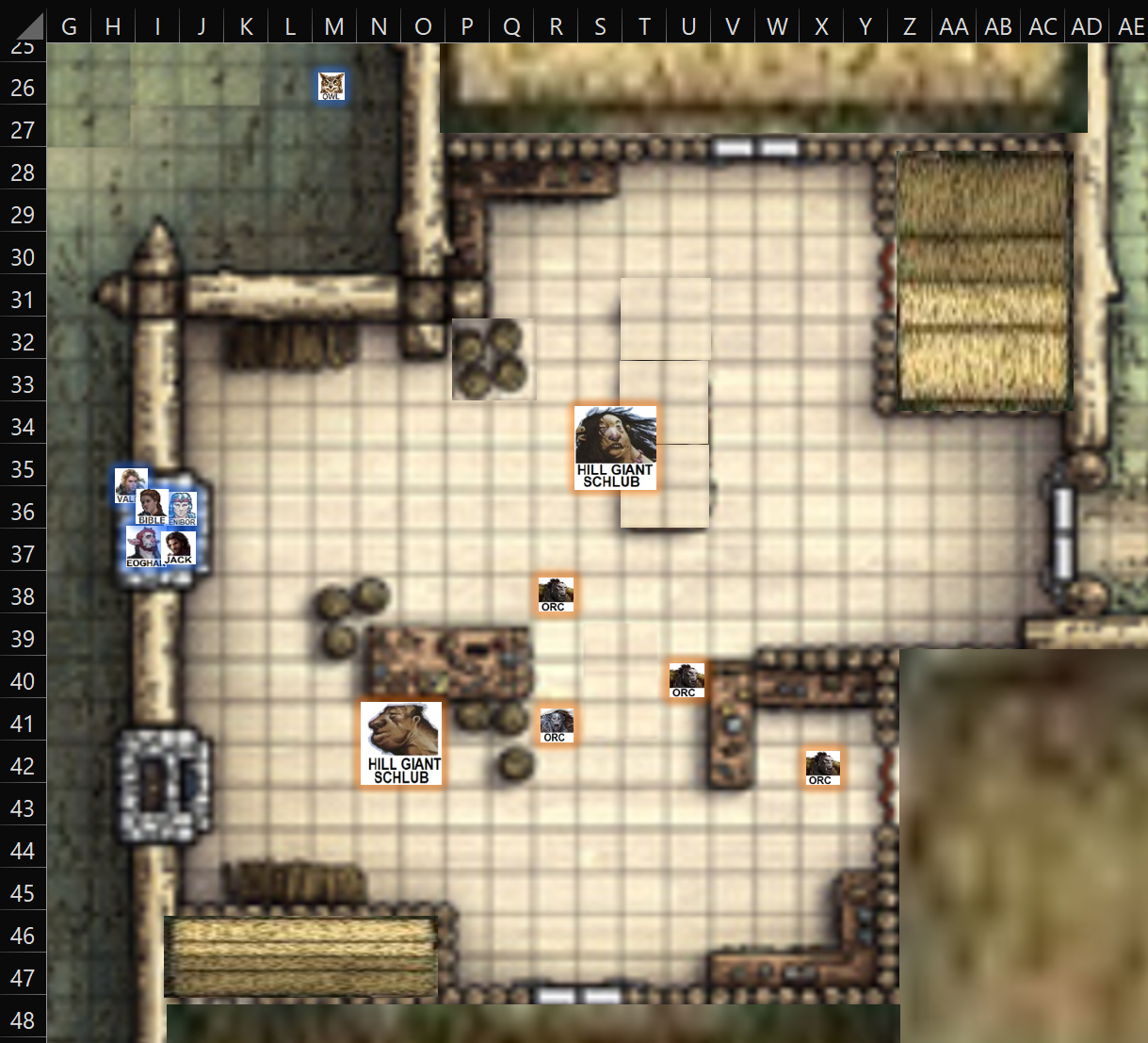 Eoghen again called on his Mantle of Inspiration, granting everyone movement and resolve, for all but Quinn still above.

He followed everyone out*, swinging to the north, and then with a flourish on his bandore a set of brambles and vines pushed up blocking the door to the south.

Like a cat, Jack pounced from the fireplace and sprinted across the room to the western doors, dodging and weaving between the hill giantess and one of the orc lackeys. Once positioned, he then set his feet and brandished The Knife and his short sword.