Duvrael sends his snake familiar to scout, counting on the serpent's small size and unremarkable nature to not get hurt. The wizard magically looks through the creature's eyes, reporting his findings in a monotonous tone.

Scouting at slither-rate was slow going. The first thing that Duvrael was able to report through his snake's eyes, was that approaching the steading would be more difficult than it had been: There were armoured ogres posted outside each of the gates, next to piles of half-burned bodies.

Further observation showed that most of the chimneys billowed no smoke, implying no fires. The exception was the main hall's smoke-hole, which seemed to be going as blazing as ever, and the two kitchen chimneys, which billowed gray plumes.

Supporter
(anyone visible in the tower? about how long for the guards to make a circuit?)

The group watched the steading from the top of the tor, which was just over a thousand feet from the north-east corner (the outbuilding). They watched for about half and hour, to get the pattern of the guards (which wasn't much of a pattern, but thankfully had gaps). The two armoured hill giants would wander around the steading in a counter-clockwise path. They were poor with their timing and sometimes would both be on the same side at once. Twice, they argued about it.

From the tor, one could only make out the roof of the Watchtower, rising in the south over the main building's roof . But Duvrael's snake made its way down there, and reported that there were two alert giants there.

Approaching would not be quite as easy as it had been the night before. Even if they waited for the two giants to be on the far side, they would have to come down the hill a thousand feet in the line-of-sight of two ogres (at the north and north-east courtyard gates), and within hearing of a third (at the main gate to the south). In addition, all the ogres appeared to be armed with small rock-launching catapults, and had a pile of rocks nearby.

Supporter
"It's a long distance to cross. Duvrael -- you have the ability to turn someone invisible? One of us could approach under covern, and have a few seconds in which to wreck the catapults, before trying to escape, while the others approached. A few of us would be able to strike quick and get away, I feel. Or we could wait for nightfall, when the catapult's range, and the views from the tower are obscured.

Either of those seem better than trying to rush the place. What do you all think?"

Doc thought about the Colonel's words for a minute. Reckon not makin' a decision is the same as makin' one. But yer words got the sting o' wisdom, and looks like we already kicked over the bee's hive- better be fixin' to be careful gettin' that honey. Nightfall might put a little fear of of the devil in those rustlers.

Waythe said to Kahru, "Are there enemies ahead? If so, I suggest that you draw me and we go about slaying them. A better plan has never been plotted."

Listening to the ideas, Kaligan turns to the others and says, "I say we wait for nightfall and go in then. We might be able to get inside before the patrols even spot us."

” nightfall and returning via the kitchens?” Kahru repeated the plan as he had articulated earlier, watching the steading and listening to the others share there ideas did not give reason to change his course “I will help us all to pass without trace and then Waythe, we can go about slashing ogre throats.”

He glanced to he heads on spikes and acknowledged their sacrifice, with them dead perhaps the giant guards would not bother to search this way again…

Tonguez said:
I suppose I could use eagle form to scout around the place - can I do that and get another rest in before nightfall?
Click to expand...

The group hunkered down behind the tor, taking turns watching in place of the dead scouts, and doing a few reconnaissance tasks of their own. Three hours passed, and the lookout reported a bearded hill giant that came out of the hills to the north. Apparently he had gathered the dire wolves that they had set free the previous night, and was returning to the steading with the pack cowed. As the group watched, one of the young wolves strayed, and the giant brought out a whip with a crack that had the wolf yip and return to the center of the group with his tail between his legs.

The two armored hill giants had continued their sporadic patrol, once stopping to argue with each other before continuing on. The ogres switched out once, being replaced by other ogres who took up their spots.

Even though he had settled on going in at night, Kahru could see the sun still high, and the idea of sitting did not appeal to the barbarian zealot. Besides he could still feel the hunger of Waythe, a niggling desire to act now!

”I am going to scout the building” he declared “I can ask the eagle spirits to grant us silent wings, for myself and any other who can join me - perhaps Larry?…”

Kahru flew over the steading. The morning was cool and clear and he went unnoticed as an eagle. The dire wolves were returned, gloomily, to the courtyard, where the big bearded hill giant went about training them with a punishing hand - he did not spare the whip. The ogres at each gate were lazy. The only thing that kept them attentive was having nothing else to do (each were too far from the others to talk, and they had nowhere to sit down.)

He circled overhead, and when he was out of sight of anyone, he landed on the roof of the main building and hopped over to the edge of the smoke-hole. A fire was burning in the large firepit; smaller than the night before. A grizzled old dire bear slept by the firepit, while a hill giant stoked it lazily. Two other hill giants stood nearby with clubs ready in case of trouble.

The chief's table still laid out with food, but not the celebratory feast of yesterday. A sombre negotiation appeared to be underway. Kahru recalled that one young giant had escaped the slaughter of the chief's family (other than the one that they had taken prisoner). She sat in the chief's chair with two large male hill giants on either side.

This struck Kahru as unusual because hill giant succession was only nominally familial - the chief's family would eat the most food, and thus become the largest, and the largest hill giant would rule. This youth was not large at all, by giant standards.

The table's ends were occupied by two stone giants. A large boulder sat on the floor next to one of them - far too large to be a thrown weapon, even for a stone giant. Kahru could make out a few of the words that they said, but it was some minutia of giant politics that was neither notable nor memorable to him. 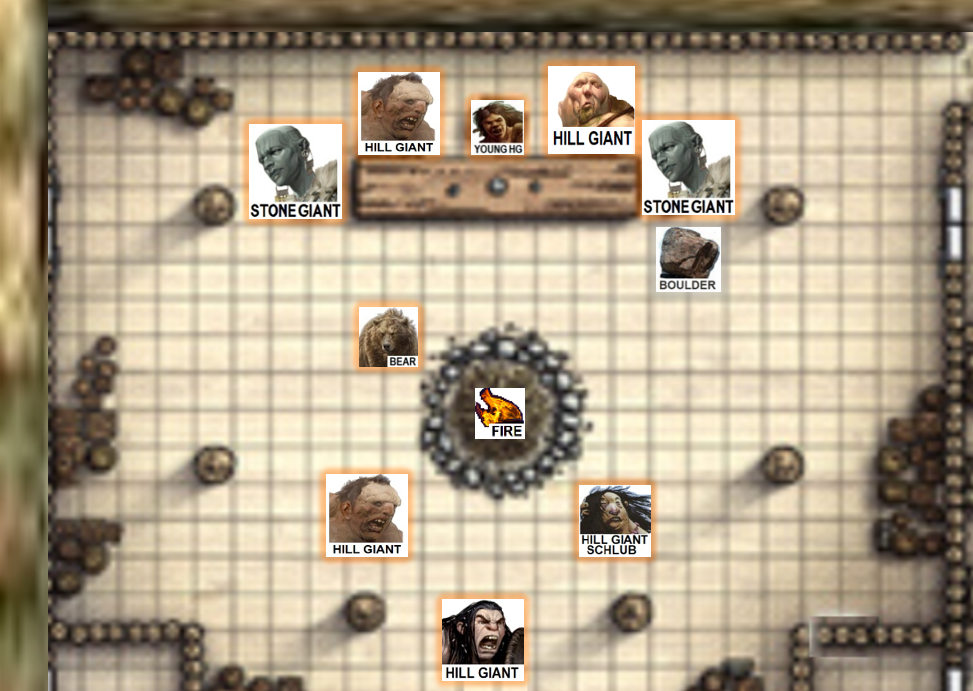 Duvrael sits crosslegged while waiting and receiving input from his familiar. He seems unconcerned at the moment, nodding to himself as the picture of the steading's defenses become more clear to him.

After a while, he adds his own input to the strategy being devised.

"Shortly before we go, I will cast a spell to inform of the cosmic powers-that-be if our course of action is wise; due to the ever-changing nature of reality I can only get reliable results when the moment is almost upon us. I can then turn a few of us invisible, although for any more than three it will cost me a more powerful spell. When you are all there under the effects of Kahru's spell, I can cause a minor distraction in the form of a loud noise on this hill top, that could draw the attention of the patrols, before I follow you all inside."

Doc is hunkered down, playing solitaire, taking pulls from his flask while waiting. Finally, we looks at the remaining group..
Any of you huckleberries want to learn to play cards for coin?

Supporter
The Colonel has no objections to going now; it's just getting across the field that's the issue; once there, he can do damage to the catapults.

Gimlak adds to the discussion: ``Unfortunately, I can only turn one person invisible, but they would be able to fight.” The spell won’t last long though.

‘2 stone giants remained even though the sky giants left’ the eagle Kahru noted as he pulled back from the edge of the Great Halls chimney, wondering as he did just what they might possibly be discussing. More importantly what was it about Nosra that it now fell upon his daughter to sit for him, rather than the lesser giants fight for his place? Lord Thyffon had mentioned a deeper intrigue going on and the place given to Nosra’s offspring added to that mystery.

As the bird hopped over to the kitchen chimneys he cringed, vexxed by the crack of the whip in the adjacent courtyard. Kahru had hoped that the dire wolves would gain their freedom in the mountains, but instead they had been so easily cowed by the bearded oppressor, it would not be soon enough before Waythe was buried in the bearded ones chest and its corpse thrown down for the wolves to feed upon!

First though the eagle checked the kitchen chimney, surely the giants had not yet had time to clean up the mess and so it should be relatively empty, maybe even abandoned. Was there any sign of life in the kitchens below? What about open windows or other ways that a sneaking band might enter unnoticed?

From there Kahru the eagle would fly again, over the watch tower to get a better sight on who was within and then swoop around to the otherside of the building, to what he guessed were the rooms that Thyffon had once occupied and the dormitory where Nosra and his children had been slain. He looked for entrances there too and noted where guards might be posted or other things prominent. Then he rose up and headed away until he was sure he could not be seen before swooping back around again towards his companions ….

Kahru flew to above the kitchen. A hill giant's hunger was the first thing on their minds, and the kitchen fires burned hotly - smoke poured from both chimneys. Perhaps they would die down when night fell, but the group would not get down that way any time soon. That said, the chimney to the north was cool; the one that would lead down to what they had come to know as the Servant's Mess. Earlier it had been occupied by a few hill giant schlubs and a few orcs. None of which had survived the initial assault.