Plool gabs the mask chunk off the ground. At least he had some proof of his hard work.

"Unless you can move the wall itself, the only way out is the way we came in!" He vocalizes loud enough to be heard over the rising winds. "This might be the last time you see anything other than this room you know!" He chides the beast, then thinks better of himself. What would his tribe back think of him for just abandoning the creature? Plool tosses a rodent into the feeding dish. "To make your cage less miserable." he explains, before cautiously moving toward the door.

Chtckh’s pressure pries the mask off the wall and sends it skittering across the floor. the smaller piece is safely in plool's hand.

The wind picks up a little more, and swirls around in 15 feet of the cage.

It picks up some stone chips and gold shavings, and the gold mask skitters across the floor banging on the bars of the cage. Chtckh is buffeted by the winds, but manages to avoid the few flying objects. If there was more particles in the air, it would be doing more damage.
But the real problem is emerging rumbling from the stone wall on the left side of the chamber. 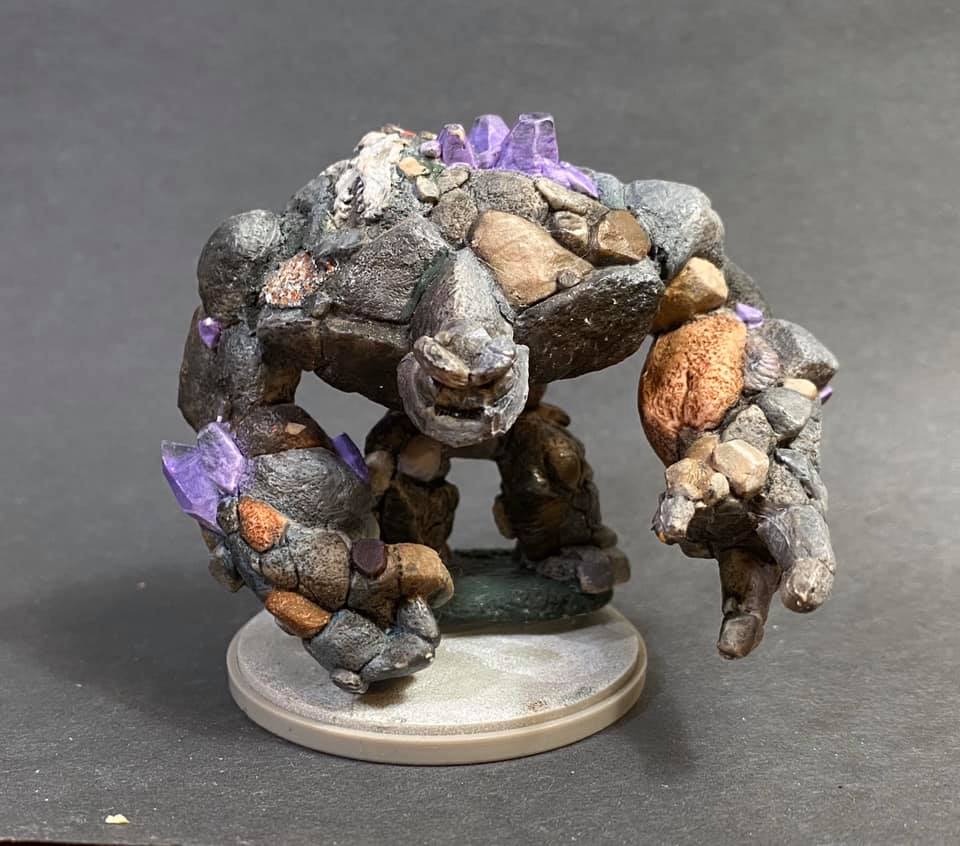 A massive creature steps through the wall, its body made of shifting rocks and a few purple crystals. It stops and bangs its fist on the wall that it just stepped out of, three times. Then spreads its arms and steps toward you. The wall it walked through looks the same as it did before.
It is probably an Earth Elemental, a cousin of the large Air elemental that most of you saw summoned to hide the Caravan. Kel knows Elementals can slip through rock and earth, but they don’t have enough control over it to build this chamber. They are also not known for planning or cruelty.

You all notice that the wind is ripping a fine layer of dust off the elemental, it looks like cracks are created in the creatures form and more dirt is exposed between the rocks. 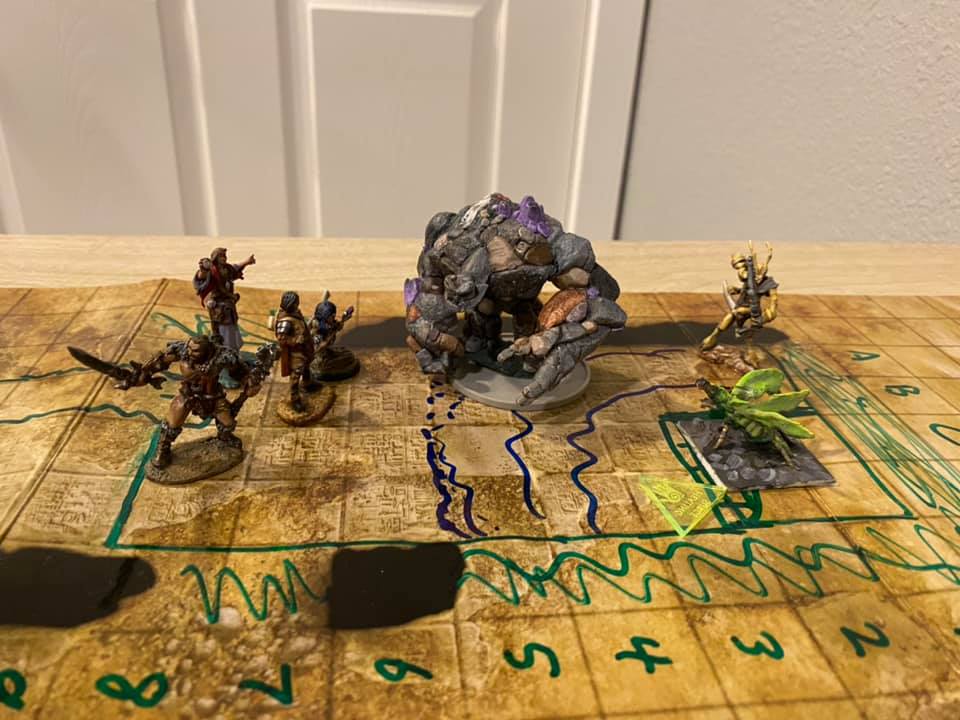 this last view shows the battlefield the best. elemental is still standing in the grey circle. 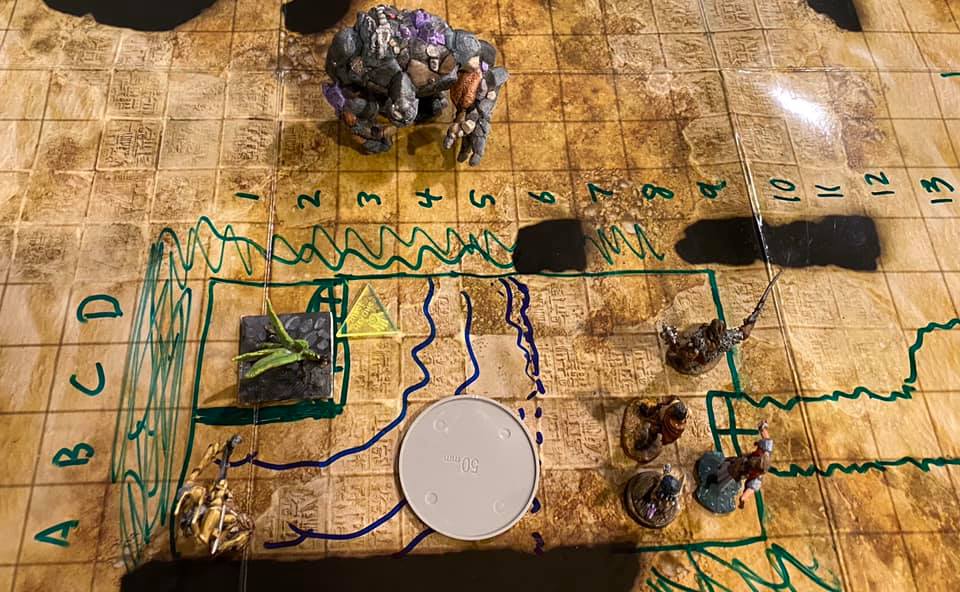 Plool's eyes go wide as he sees the Stone Creature. "DARKEST EARTH!" He shouts, before immediately springing in to attack.

Blaze is startled by the earth elemental; somewhere inside he feels some sort of connection to another creature of the elements, but the former gladiator ignores that feeling to focus on the danger it poses.

Taking a few steps sideways to avoid hitting his allies in his attack, the genasi makes a fist that immediately erupts into flame, and then throws that magical fire at the elemental.

"Why are we fighting it?" Blaze whispers harshly, realizing the answer doesn't matter now that combat has already started.

“We need to find a way for the creature to fight the elemental!” Kel says to his companions, without an actual plan, before he concentrates.

Varsk stands his ground waiting to see how the creature plans to act.

To Chtckh, this all seemed like a good way to break weapons and to get thumped. Firing arrows would be tricky with all this wind, as well. Perhaps the sky-ray would help them against the elemental. He supposed that the worst case scenario would be that things would get worse, naturally. Chtckh threw his shoulder down and charged into the stone bars that held the creature imprisoned, but they held fast.

Plool’s precisely aimed kicks find a weak spot on its leg, but it barely notices the impacts.
Varsk’s blade penetrates the stone creature, aimed at an especially large crack between the stones.
It shrugs off the effects of the mockery, you need to use a simpler insult.
The axe and the ball of flame both strike against its stone hide, deflecting off.

Without bothering to move the elemental just pounds on the closest person.
The elemental swings both fists at Plool, connecting with one. The massive blow nearly brings the halfling to his knees.

The broken pieces of stone bars from the entrance are dragged into the whirlwind, first bouncing off the stone bars of the cage directly, then joining the golden mask and the small pieces knocked off the elemental as the whirlwind , but none seem to hit the elemental, or the Thrikreen. The bars seem weaker, just not enough to break. The Cloud Ray also drifts against the back of the cage, moving the whirlwind slightly. (row 5 is now clear) 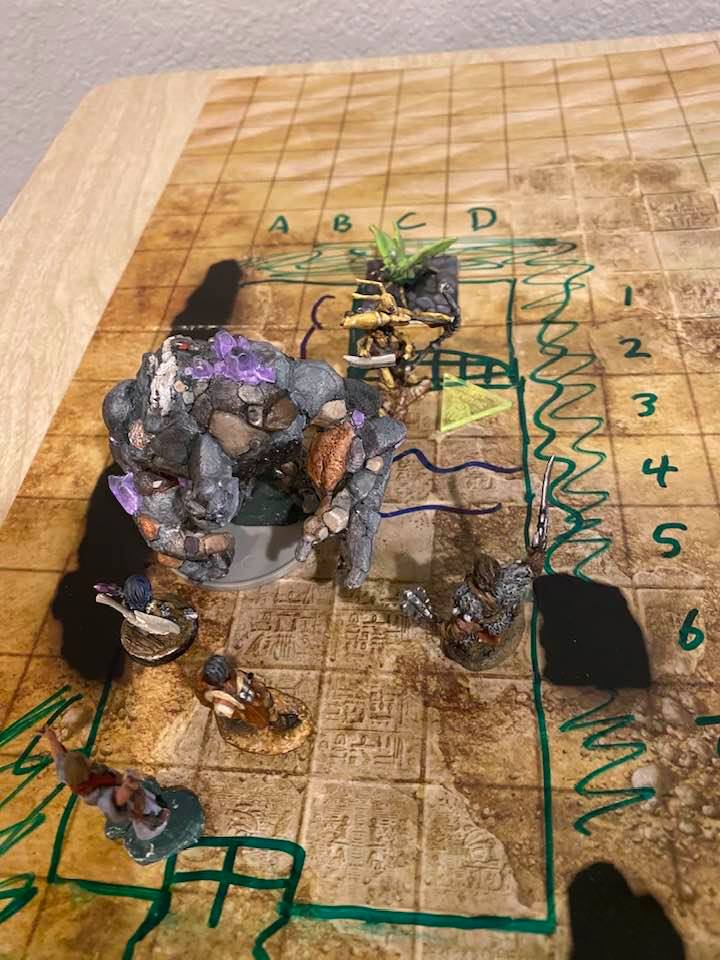 Kel focuses his mind, and tries to disrupt the elemental’s psyche again.

Chtckh noticed that he still held the metal-tipped spear in his lower hands, so he thrust the point at one of the bars holding the ray prisoner. It scraped off the rounded stone to his frustration, so Chtckh threw the spear along the ground to Plool, hoping it would prove more useful to the monk.

Plool gets the wind knocked out of him by the blow. "OK... try not to get hit... this thing hurts..." He wheezes as he pulls out his cleaver.


Plool then assumes a defensive stance, using the cleaver as a shield, while probing the enemy with another kick.

"Incoming!" yells Blaze, hopefully warning his allies enough before a ferocious wordless cry erupts from his mouth. At the same time, a bright fire washes out from the genasi in all directions as he reaches within his elemental nature to find the battle focus he needs.

Stepping forward, the warrior now appearing larger than before, he attacks the stone creature with a ferocious attack that leaves his defences wide open...

Varsk barely has time to move at Blazes warning before he is bathed in flames. He recoils at the heat that singes his hair. As the fire subsides Varsk pats out a small fire from his cloak. He shoots a furious glance at the genasi but turns back to the more immediate threat. He throws his remaining energy blade at the elemental. Varsk then move back away from the creature to avoid being hit by Blaze again. As he moves the green blades reappear in his hands.

The elemental again ignores mockery. The axe and club find vulnerable spots in the elementals skin.
The psionic knife slips into the elementals body as well.
The elemental smashes the wall and the ground, not getting anywhere near the well-prepared halfling.

The spear is picked up and driven more purposefully at the elemental but slides off. The bars, gold mask and now the spear are flung by the random winds at the elemental, leading to more chips and dust being torn off. In passing the items also whirl by Chtckh, who is ready for them and dodges again. Instead, they crash against the bars breaking off pieces, but not yet creating a useful opening. The stone pieces join the whirlwind. There is now a serious amount of stuff in the air. 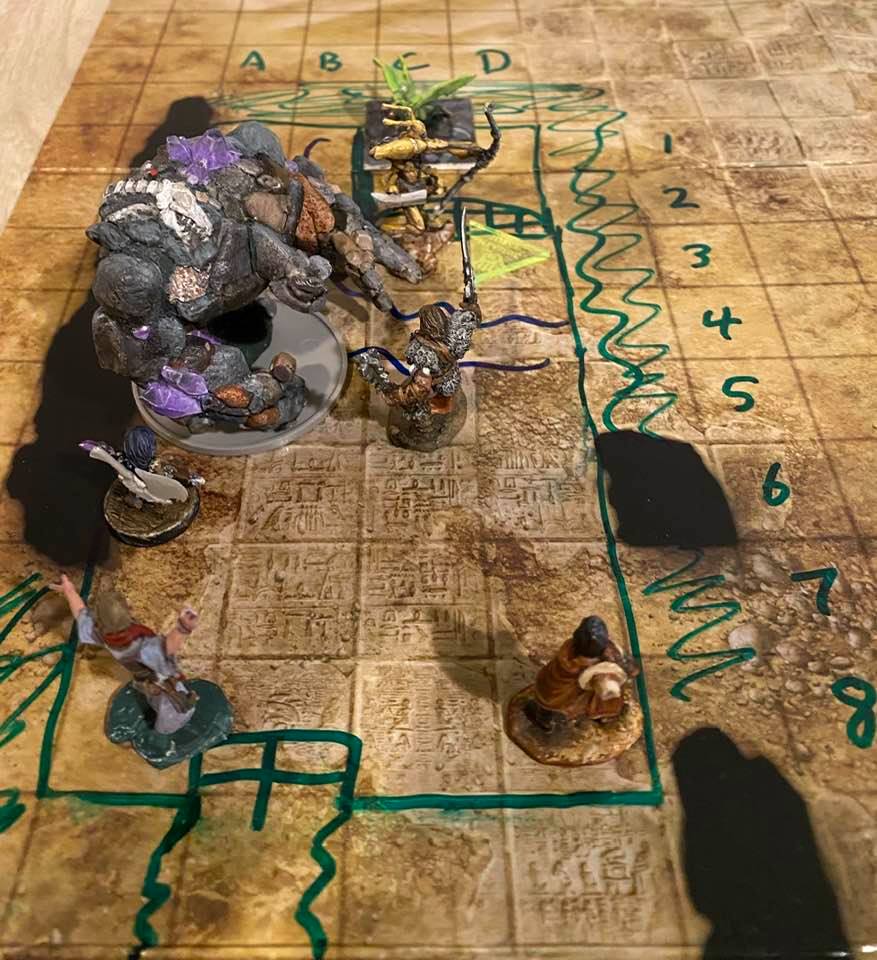 Chtckh grew frustrated by the constant wind and the enormous elemental. He drew as many swords as he had, and he lunged at the creature with a barrage of attacks.

"I suppose that's what they mean by 'Dumb as a rock?'" Plool mocks the creature as he dances off it's fists of the stone, using the extra height to spring up and kick it in what Plool assumes to be it's head before returning to the ground.

When his feet return to the floor, Plool resumes his defensive positioning.

Now fully into his battle rage, Blaze once more lets the fire within emanate outwards, burning everyone within ten feet, before once again attacking with the bone club.

"Stop it!" he screams in Primordial as the creature once more tries to pound his ally.

Kel is disappointed at his inability to affect the elemental. He switches toa different mental approach, and focuses his mind again.

Flames lick in front of Varsk's face and he can feel the heat from the fire that emanate from Blaze. The heat is almost to much but then dies down, Varsk just ouside the radius of the flames. Varsk throws one of the blades rigght as the orange curtain subsides. He follows up the first blade with the second. The first blade strikes true but the second flies wide. Varsk stands his ground preparing to reform his psychic blades.

JustinCase said:
Now fully into his battle rage, Blaze once more lets the fire within emanate outwards, burning everyone within ten feet, before once again attacking with the bone club.

"Stop it!" he screams in Primordial as the creature once more tries to pound his ally.
Click to expand...

Just before your turn, the elemental disappears into the floor.
you still have your actions.
Last edited: Mar 3, 2020