Chtckh, having pulled out his swords, spun around and hacked away at the stone cage that held the wind-ray.

by the time he disengages from Chkth he has full cover from the floor, I rolled one for Plool.
I dont want to post results of the whole round, because only blaze has full freedom to act before the critters act again.

Blaze is about to attack the elemental when it just disappears.

"Yeah, flee!" he yells in Primordial, instinctively rushing after the creature and slamming his fist into the wall, once, twice, thrice... Then, panting, the rage leaves his body and the genasi cools down - literally.

“It’s coming back, we have a few seconds to get out of here”. He looks for any remaining scraps of gold and heads for the exit.

Chtckh tried one last time to free the sky-ray before heading for the exit.

The elemental is pounded again and again. Chtckh’s first strikes serve to bring the creature to half its former health, and this time Kel’s psionic suggestion is met with approval the creature moves away from him and sinks into the floor at the same time, Plool’s axe bounces off its legs, Blazed club lands solidly on its head as it sinks away, breaking off another large piece. The now ragged-looking elemental vanishes into the floor at row 3

Before Chtckh moves or tries the bars again, he is buffed by flying debris, there are too many small pieces to dodge, the elemental is buffed more heavily and the bars are shattered as well by the force of the objects driven against it. The cloud ray tries to push through the shattered bars and the Thri-kreen, but fails to make any progress

The cloud ray moves forward and the storm around it rolls over Blaze, who is struck by chips and debris.

The mask and metal spear are still flying around and can be grabbed as standard actions, automatically if inside the winds, with an unarmed attack roll if outside.
The crumbling elemental does not return.

Instead, a passage appears in the left wall right beside Blaze. It is 7’ wide, 12’ tall. It extends 30’ straight through rock and earth, beyond which Blaze can see the entrance to a chamber in the shades of red provided by his Darkvision. A carpeted room with square stone table tall enough for him to rest his chin on, set with some kind of game board.

A booming but obviously female voice calls up it. “ Welcome visitors, it has been a while.” – and then she mutters something that sounds like rumbling rocks and grinding earth. Returning to Common she adds: “Don’t be in a hurry to leave, I just need to finish picking out my earrings, then I will be right with you."

The muttering was in Terran, a dialect of Primordial, and was hard to hear over the winds. Blaze manages to catch something about Go, {something] walls [something something] the exit.

Plool stays tense for some time after the stone creature leaves, any creature that can move through the earth could retaliate at them from any angle.

After a bit of time, he relaxes, convinced the creature has gone to lick it's wounds (or whatever a rock would do for self-care)."At least the big one was more reasonable than the dead ones." He remarks, while grabbing at the spear from the air as it flies past.

The moving wall startles Plool more than a bit. At first convinced he had been duped by the stone creature, he sets up his guard again. The unexpected voice from beyond does little to convince the halfling that he should drop it. Such a big voice would imply a big person, and big people have big appetites.

"I wouldn't be surprised if that was the one who put this ray in the cage." Plool says as quietly as he can while the winds whip around. "Maybe she intends to do the same, or worse, to us?"

Blaze recognizes the peculiar dialect of Primordial, and unable to contain his curiosity moves further into the passage. He holds his club up cautiously as in his other hand he conjures up a flame to see more.

"Who are you, mysterious one?" the genasi calls out in a loud flair which would fit nicely in a theatre or arena.

His heart sinks after hearing the voice. He was hoping to get out to safer grounds, but stays near his newly found allies.

Chtckh followed everyone though the door, still holding his three swords. When he saw the woman, he clicked and gestured toward the ray with his one free hand, asking her if she was holding the creature prisoner, and why. He finished with a gesture that indicated that he wanted her to release it, if her reasons were not a matter of safety.

Varsk moves up carefully towards the passage and reaches out to Blaze with his mind.

Do you think following a strange voice is a good idea? This could be a trap.

Blaze abruptly stands still as a voice sounds in his head, and somehow he knows that it is Varsk.

Not daring to look behind him, the genasi tries to make a response by thinking very hard, "OF COURSE IT'S A TRAP, I'M SPRINGING THE TRAP!"

Then he moves on, unsure whether Varsk could hear his reply.

lacking confidence, Kel says: “sorry mistress, we were exploring this cave and meant no harm”

Yedra, Lady of the Deeping Vault, Mistress of the Malachite Halls, Pontiff of the Diamond Falls, Dao of the Shuddering Depths and Protector of Under Raam.

The 8 foot tall ebony-skinned woman, wears steel amour, washed with gold. Her earrings and waist are set with massive gems, and her cloak appears to be made from the hide of some huge scaled beast. At her hip, an enormous sword made of bone seems almost to vibrate hungrily.

She advances until she can peers into the room around Blaze, nodding she gestures and a 3" thick wall of stone rises around the edges of the room, sealing the cloud rays cage, cutting off the storm and closing the passage you used to enter.

"I needed some new slaves, and y'all are just perfect! Now, sweeties, I can tell you may be thinking about a ruckus, but if y'all are too tiresome, remember that your in my home, and that when I redecorate,I just collapse the rooms I don't need.

[pictures] may not be exactly to scale 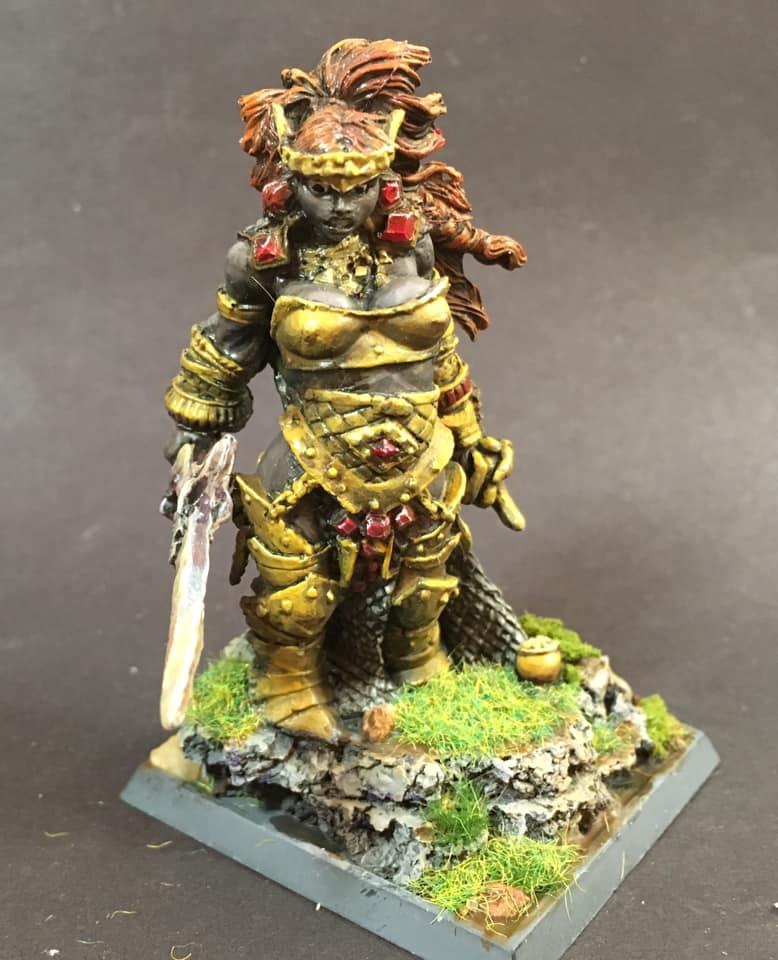 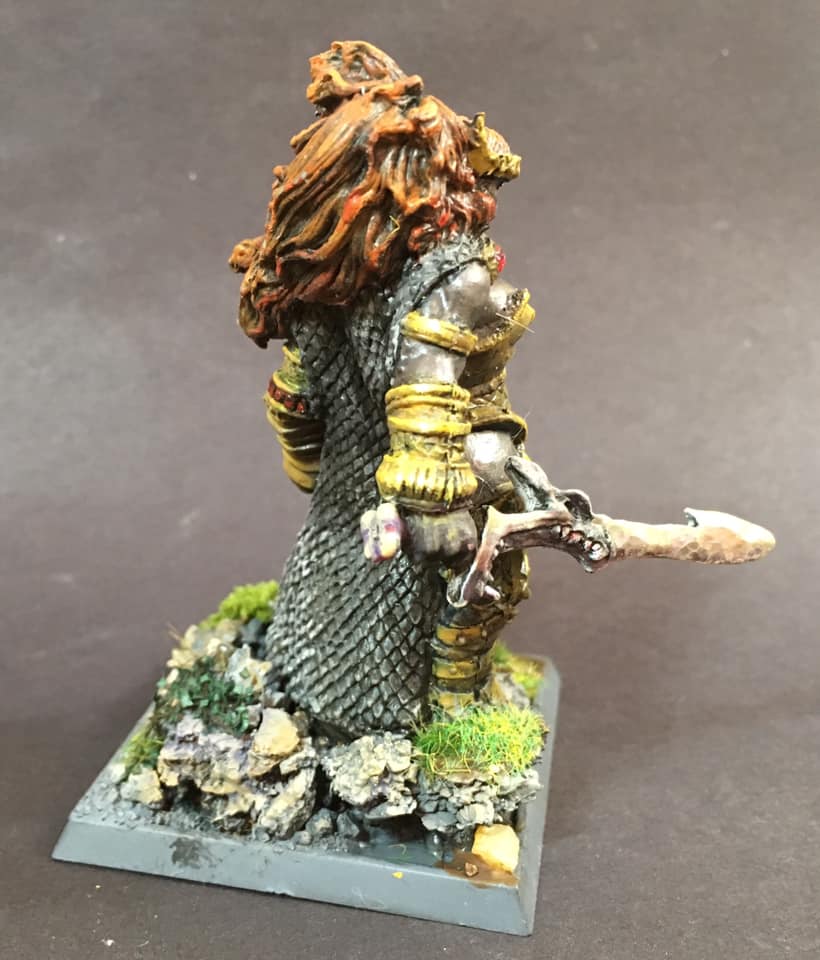 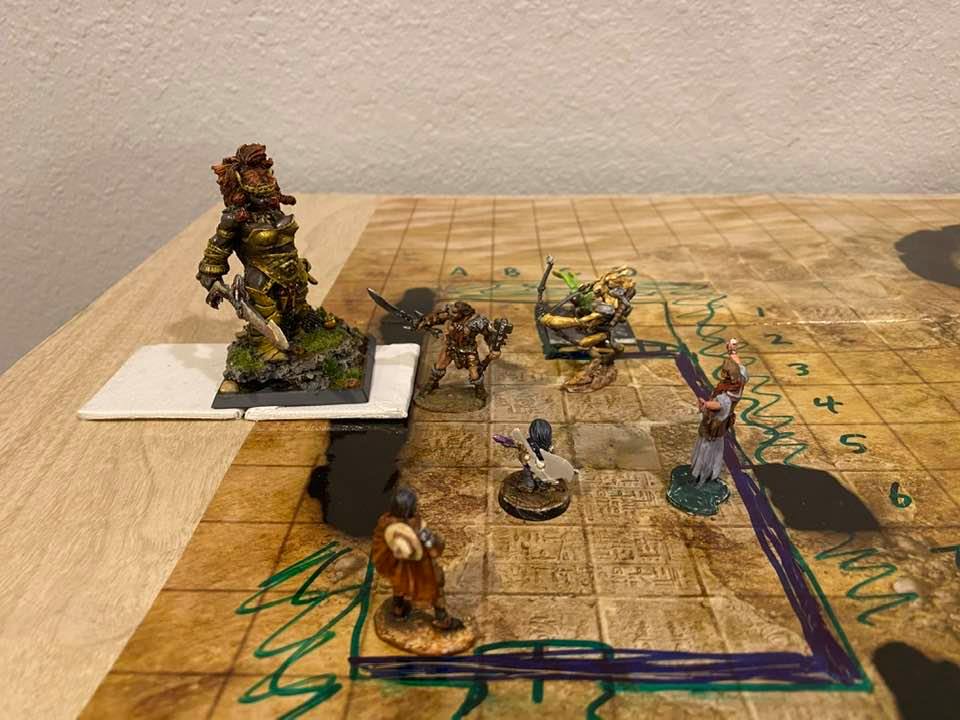 Blaze inhales sharply as the massive woman steps into view, and it is not just her massive size and obvious power that catches his attention...

"M'lady Yedra, the pleasure's mine," the fire genasi says with an unexpectedly warm and soft voice. "My name is Blaze, elemental descendant and former gladiator. I had heard of the Dao and their absolute mastery over the earth and rock, but the stories never mentioned your.. magnetism!"

He looks the massive woman over with an approving look, and the flames in his hand ignite larger ones on his bald head, giving the impression of a stylish hairdo that he nonchalantly tosses back.

Kel’s anxiety spikes as he sees Blase’a hubris towards the powerful Dao. Remembering his training in the way, he forces his heart rate down and kneels with deference.

“Mistress Yedra, we apologize for trespassing in your home. Would you allow us humble slaves to leave and disturb you no more?”

Kel’s manners are polished, and the others, including Yedra, can see he likely was not born to a life of slavery.

Plool takes Chtckh to the side and starts whispering "I don't think we can pick a fight with her and win, at least not right now" He looks at his bruises accumulated through this day. "Should we play along? I don't see any exit that isn't behind her."