OOCoes anyone have a spear? We could use that to push or hold the zombies.
Click to expand...

The broodguard looks at the others expectantly as they try to formulate a plan. He looks at the undead creatures, his nose wrinkling at the foul smell, then looks back at the other yuan ti, confused.

"Bah, let us just bash their heads and be done with it." said Qawasha, who had always hated undead.

Step asides, says Chrysagon, let Kelemvor's power repel the undead. He steps up to the door, holds up the holy amulet of Kelemvor and speaks load and clear: Begone foul creatures. You do not belong here!

The zombies moaned and shuffled away from Chrysagon, dragging the heavy iron door back along grooves in the walls. When it reached about fifteen feet away, one side locked in place while the other continued back, and the whole thing rotated sideways, revealing a thirty foot hallway that travelled slightly upward to a large chamber.

Six glass cauldrons overflowing with humanoid bones lined the walls of a tomb, at the center of which stood an ancient chariot bearing a bronze sarcophagus with treasure strewn atop and around it. Paintings on the chariot’s body showed a tall bird with a long, sharp beak. On the south wall, a bronze shield bore the embossed image of a Chultan warrior carrying a spear, below an inscription in old Chultan script. Four bronze statues stood on pedestals to either side of the shield. They depicted Chultan warriors: one holding a sword, two with spears, and one missing its face.

Four pillars supported a vaulted ceiling. Near the south-easternmost pillar was a tall skeleton, much like the one that had gone over the balcony railing, except that while that one had a head carved in the shape of an octagon, this one's head was shaped like a square. The skeleton immediately began to move, attempting to take cover behind the pillar, and began to climb. 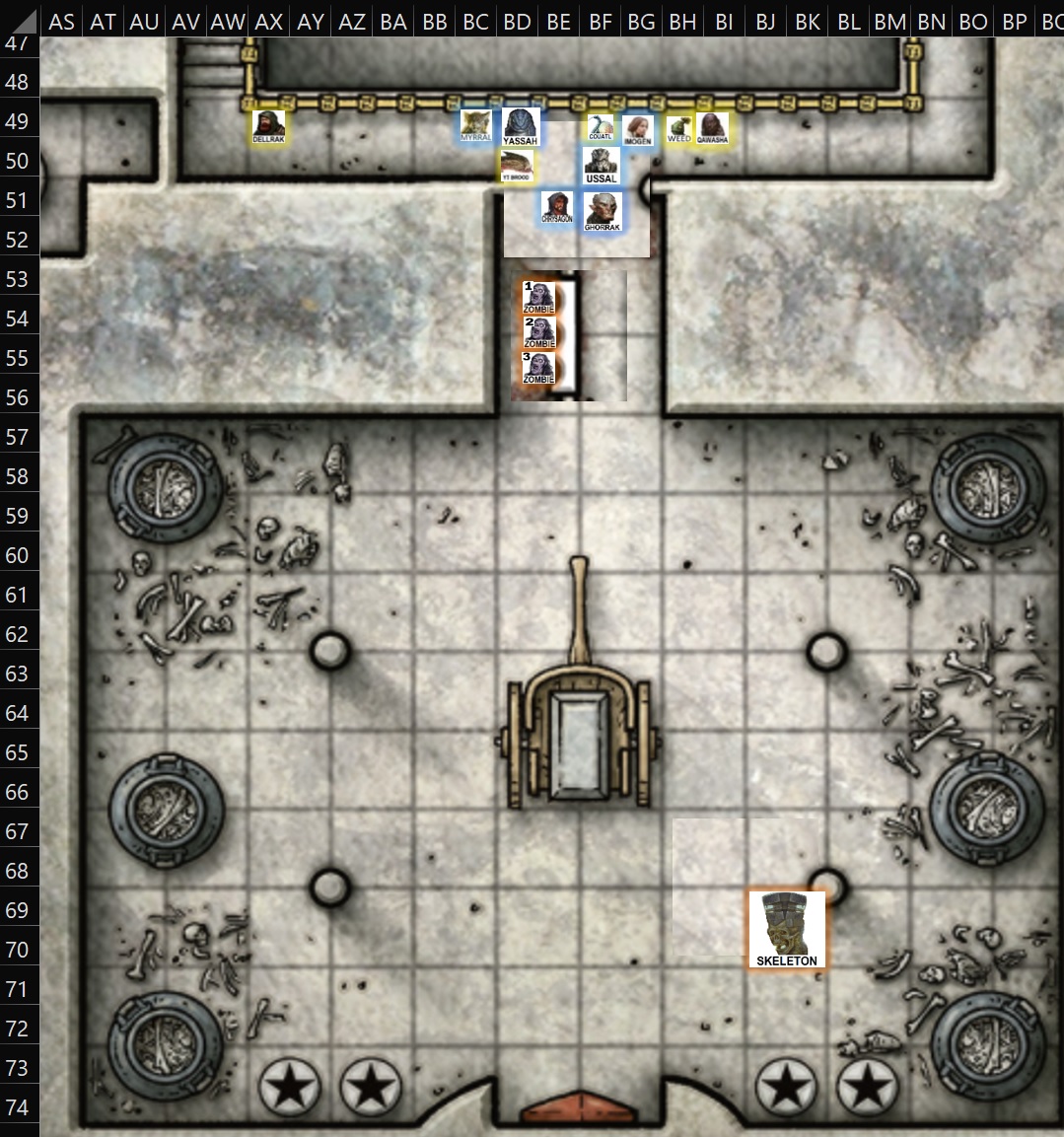 Ussal slithers forward looking at the skeleton inside, careful not to touch zombies.
"We jussst want to loot this plassse. Don't fight usss!"

Ussal took the lead, slithering past the zombies, who moaned and chomped their teeth, quite stuck behind (and chained to) the metal door. The skeleton was calmly climbing the pillar, and had almost reached the vaulted ceiling.

Supporter
Miss Imogen makes her way into the room. The chariot is stunning, and draws her notice, but for now she stays back; arrow nocked, and is ready to raise her bow and fire at the skeleton if it moves.

Kobold Stew said:
...fire at the skeleton if it moves.
Click to expand...


The skeleton was moving, but like the other one before it, it seemed to be running away from the company, and wasn't doing anything threatening at all.

Supporter
(my mistake. sorry -- She lets it run.)

"We mussst be careful!" he warns the others. " I sussspect many traps. The ssstatuesss may become alive if we disssturb the wrong thing."

Myrral looks up at the moving skeleton. Seeing it is not attacking, he moves toward the chariot, but looks at the room as a whole first.

Drawing upon his knowledge of the contemporary Chult language and his history knowledge and legends lore, he attempts to translate the inscriptions.

"Qawasha, do you know what manner of creatures is this bird?"

OOC: also, what is the bird?

Moving into the room with the others, Wrok the broodguard keeps his attention on the fleeing skeleton. He knows the others will search the room, so it is his job to stay vigilant.

Ghorrak moved into the room, ignoring the skeleton and looking to see if any of the statues resembled the warrior painted on the wall.

Chrysagon walks into the room past the quivering skeletons at the door. Carful not to touch anything, he takes in the scene. The cauldron looks horrible with all the bones inside them. And these bones could also animate, he adds to Ussal's comment about the statues. The statues themselves looks ominous too but it is strange that one of them is lacking a face. That is unusual, he points out to nobody in particular.
Chrysagon continue with the inspection of the bronze shield. He thought that the image of the Chultan warrior was quite beautiful and misplaced here. This shield would look good in a castle, right? He looks at the inscription but doesn't recognise the language. Hey, Myrral, can you read the inscription?
Next, he walks around the chariot, inspecting the treasure without touching anything and trying to see if anything stands out as particular valuable or otherwise useful.

Chrysagon looks up at the skeleton with the strange head. Have anyone noticed that this skeleton looks similar to the other skeleton, but with a different shaped head? I also find it strange that both of these kind of skeletons do not attack us. Everything else in this tomb is trying to kill us, except these skeletons. What do you think that means?

"Maybe they the keys and their heads need to be preserved?" Myrral distractedly comments trying to read the inscription

Yesterday at 8:59 AM
gnarlygninja
G