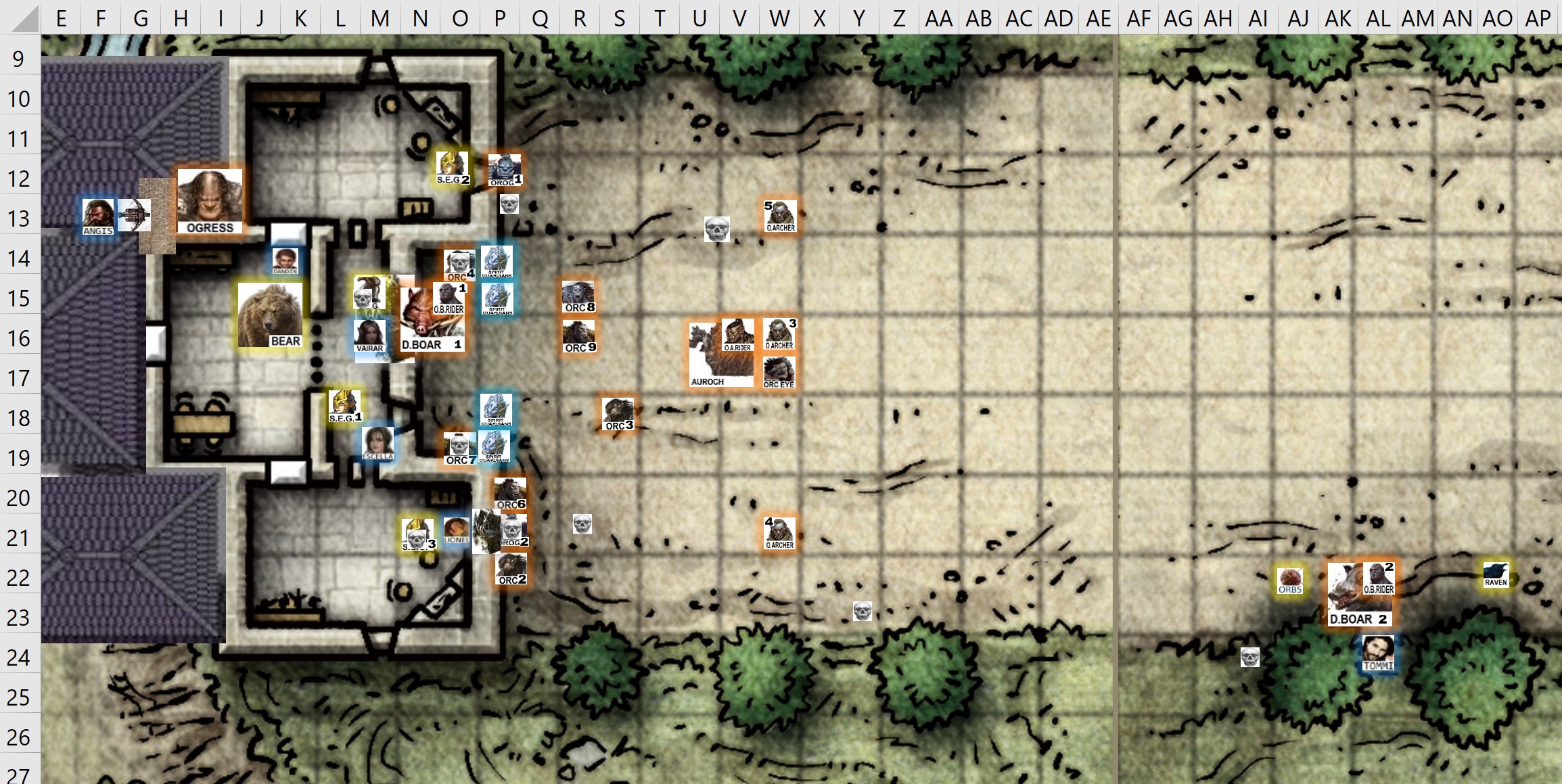 Escella takes one more chance on her best spell at the shaman and hits him hard. She moves from the arrow slit past the guard, "I'm going to go check on Lionel." She manages to slip past the boar and bear about to meet one another and steps into the south tower. (K20)

The one-eyed orc shaman burst into flames, turned one full circle, and fell on the ground smoldering.

Vairar finished strapping on his shield and he stood tall as his elf-host moved in swift retaliation. They killed the boar-rider at the gates, and cut down his boar as well. That finished, they leapt improbably high, onto the roof, and they surrounded the ogress, stabbing at her from all sides with their ghostly, shining blades. The ogress fell, and she slid down the roof taking tiles with her, before plunging to the ground below.

Supporter
Tommi is scared, and for a moment he considers a final, desperate leap at the rider. But what good would dismounting him do? None.

Instead, he runs in front of the boar's tusks and hot breath and as the boar rider swings his spear around, Tommi grabs it and ducks underneath. And then he runs.

In his hand, he thinks he hears Gutter whimper, and say "Thirsty."

Open ground, on the gravel of the grand approach to the gate, making for the trees. Regretting his foolhardy climb of the cliff that put him outside the walls, regretting being noticed by the rider. Regretting the time he kissed Alison Hardcheese who had always liked him, but for whom he had felt nothing but a desire to make Sherlen jealous when she heard about it.

His socks feel wetter than they did before. Was that a false sensation, he wondered, his senses suddenly hyperacute? More than likely, it was just more blood pooling, and he thought of his poor mother, who would have to clean the boots afterwards.

He drew in a breath, his lungs heaving, and it tasted better than air ever had before.

Angis harrumphed with disappointment as the ogress went down to a swarm of ghostly elves from below. Then again, he was still shaking cobwebs out of his noggin as he put his axes away. He saw Tommi far out, running across the road, with a boar rider after him.

“Fool boy!” Angis growled, stepping up to the crossbow again and taking aim at the orc rider, firing.

The boar rider was grazed by Angis' quarrel as he pulled hard on the pig's reins, turning the stubborn beast around to chase Tommi, who was crossing the road as fast as he could. The raven appeared to be following Tommi, who half expected to feel the claws dig into the back of his head - he could hear the wings beating right behind him. But then, the bird swooped over his shoulder and as it landed, it twisted its shape into that of an elven woman, her face marked with tattoos.

"Take cover, brave but foolhardy boy." she said to him in a thick accent that Tommi had never heard before, "The Crescent Circle has come when called."

She raised a gnarled staff, and the road erupted in vines that wrapped themselves around the boar and rider, stopping them in their tracks and wrapping them tight.

Then, bursting from the woods came a half-dozen animals: An enormous ram; a sabre-toothed tiger; a black panther; a massive vulture; and a wolf the size of a horse. In addition, scuttling along the ditch at the side of the road, staying low to the ground was a spider the size of a large dog.

Vairar watches in satisfaction as his hated enemies fall around him. But as the boar settles down he sees the valiant elf sergeant on the floor. Flicking part of the power invested in him toward Ryallan, he advances on the host.

"Come on, everyone, let's finish this!"

Coming outside, face to face to several orcs, Vairar walks calmly outside, the elves of the celestial host coming forward with him. Looking around, he adjusts his steps so he can catch multiple orcs into the spell area.

Seeing more of them than he thought possible are still alive, he sets his shield and waits for the worst they can throw at him.
In orcish, he calls out:
"Come now, rejects! One little elf, all yours for the taking!"

He grins at the orc he walked up to.
"You die first, beast, watch your back."

The arrow only just missed Lionel but hit the elf guard instead. In horror, Lionel saw the guard slump to the floor with masses of blood coming from the wound. Oh no, Lionel thought frightened, next arrow could come for me! No arrow came but two orcs showed up where the oroc had fallen, chipping away at the wall. The hole was now large enough for one of them to push through. Lionel raised his sword again and brought it down on the approaching orc. The orc fell down next to the fallen elf guard bleeding from the fatal wound.
Before Lionel moved back into cover, he located the archer on the road. Further down the road he saw Tommi scrambling to safety and, what appeared to be reinforcement, turn up in the forest beyond. The tide of the battle might change, Lionel thought to himself and started to feel a little less frightened as he switched to his crossbow.

Vairar, surrounded in ghost-like elf warriors, charged out of the now-broken door, leaping over the rubble. His elf-host fought with the orcs, who did their best to hold them off. The one closest to Vairar fell to the glowing blade of an ancient elf warrior.

The large orc who rode the great bull retreated a few steps and he called to the other orcs to put an end to this elf and his priestly magics. Though harried by the elf-host, the orcs surrounded Vairar, and they swung their axes with ferocious intent. Vairar spun around, staying low under the protection of his shield and he successfully fended off each and every blow as they rained down on him.

Sergeant Ryallan sees beyond the gate once he gets on his feet.
"Help is coming! Hold on! By the Seldarine, HOLD!" bellows the sergeant.

He pulls back from the door, readying his weapon, drawing an arrow from the quiver.
"Vairar! Back! Fool priest!"

One guard pulls back from the northern window. One guard shoots at one of the orcs back and moves away from the archers line of sight. Third one remains on the floor, blood pooling under him.


Sergean Ryallan:
Move: gets up and moves 15 out of line of sight of the archers
Action: ready the bow

FitzTheRuke said:
The large orc who rode the great bull retreated a few steps and he called to the other orcs to put an end to this elf and his priestly magics. Though harried by the elf-host, the orcs surrounded Vairar, and they swung their axes with ferocious intent. Vairar spun around, staying low under the protection of his shield and he successfully fended off each and every blow as they rained down on him.
Click to expand...

Lionel checked the condition of the fallen Sun Elf guard but there was nothing he could do to save her. The blood loss was too great and she was dead.

Supporter
Tommi's been called a fool before, and he hears the imprecations form the stranger's voice as the boar he is fleeing is suddenly grabbed by vines emerging from the path. There is fear on the creature's face, and on the face of its rider.

There is fear on Tommi's face, too, but for a moment he thinks that he may live long enough to be called a fool again.

Dandin hesitated. He was feeling shaken by the state of things; the chaos and uncertainty. In addition, he was unsure if it was reasonable of him to send Ol'Sooty out to meet the orc's arrow-fire. He had only just gained the bear's trust. But things were desperate, and he didn't want to let the others down. He steeled his resolve and stepped through the portcullis, firing an arrow to show teeth, that felled one of the orcs. Then he waved for Ol'Sooty to charge.

The bear did exactly as he asked, rushing on all fours through the rubble of the destroyed door and coming up alongside Vairar. When he reached the crowd of orcs that surrounded the elf, the bear plowed into them. He lifted one clear of the ground and shook the orc like a rag-doll before tossing the lifeless body aside.

As Dandin had feared, this got the attention of one of the orc archers, who put two arrows into the bear's side. Ol'Sooty roared in pain, anger and frustration; a terrifying sight to behold.

In the south tower, Escella had just arrived through the door when an arrow sailed through the broken outer wall and grazed her. Lionel was practically in the fireplace, taking cover from the many arrows.

On the roof, Angis had taken up his crossbow again, but his hay-bale cover was not as effective now that it had been kicked over by the ogress. An archer fired a well-placed arrow that struck the grizzled dwarf hard in the arm, making reloading the crossbow a painful affair. 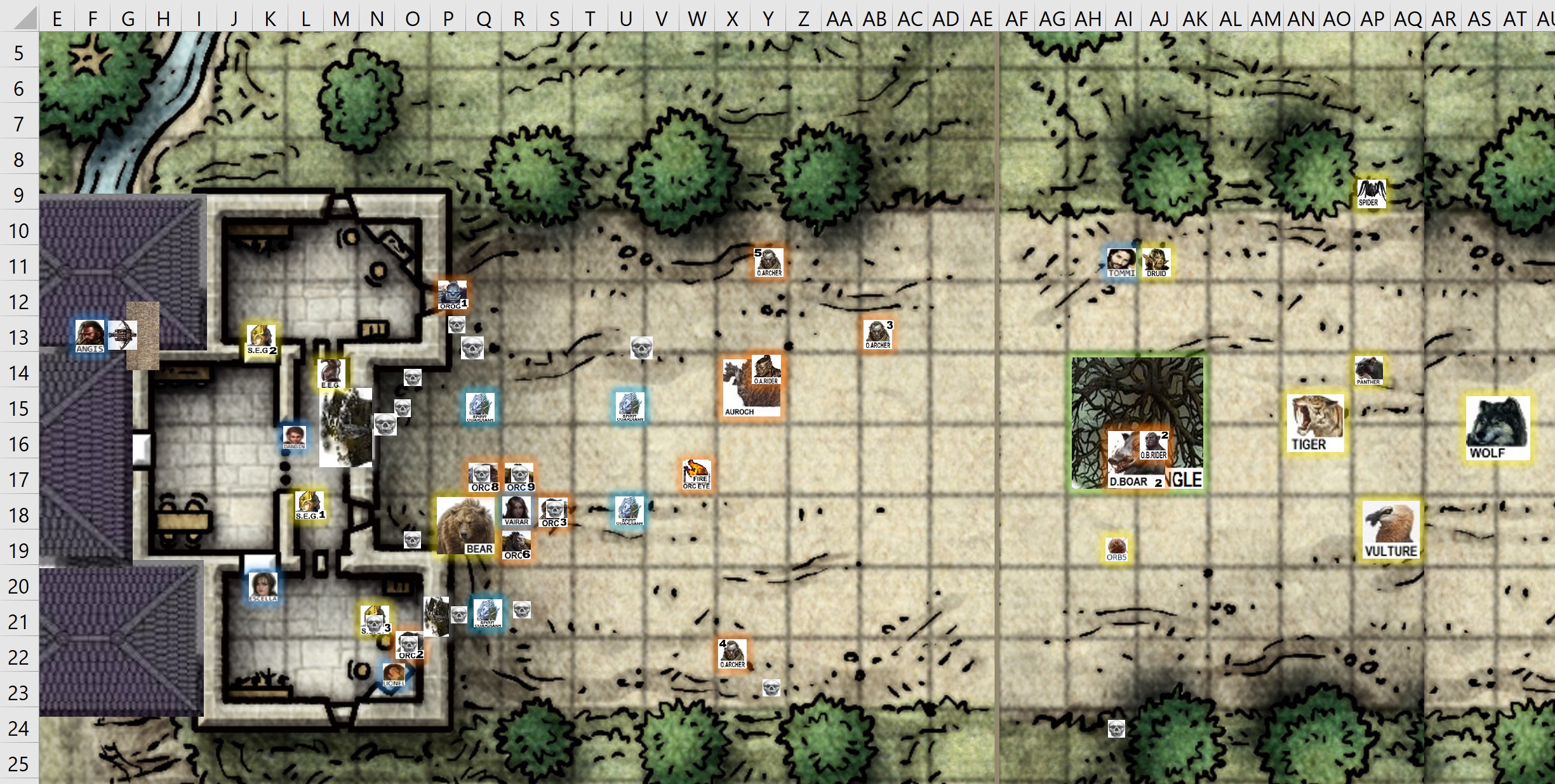 jmucchiello said:
I can't tell. What are the creatures in arrow slits 2 and 4 and are they alive?
Click to expand...

Supporter
Looking back over his shoulder, Tommi sees the vines grow and embrace the boar that is chasing him across the road, and he hears the melodious voice of the bird-now-an-elf who is standing beside him, upbraiding him with the most attractive angry voice he has ever heard.

"Nice to meet you," he says, as he turns to face his pursuer. On his left he hears a tiger roar, and on his right there is a scream of a bear. The boar he is staring at is being strangled by a vine, and there's blood on Tommi's shoes, and in them as well.

On top of the boar sits the rider scowling at Tommi, or at the woman standing beside him. Tommi's hair is in his eyes, and it's matted down with blood as well, but the boy is reaching for a stone and loading his sling, which with a single underhand swing he launches towards the boar rider.

Angis grunted as he took an arrow in the arm. His cover had been demolished by that damn ogress. He yanked the arrow out of this arm and tossed it aside, grabbing the next large bolt, and loading the crossbow again.

Angis had lost track of Tommi in a sudden dense tangle of vines that had appeared in the road, so he drew his aim to another large creature on the battlefield, the aurochs that one of the orcs was riding.