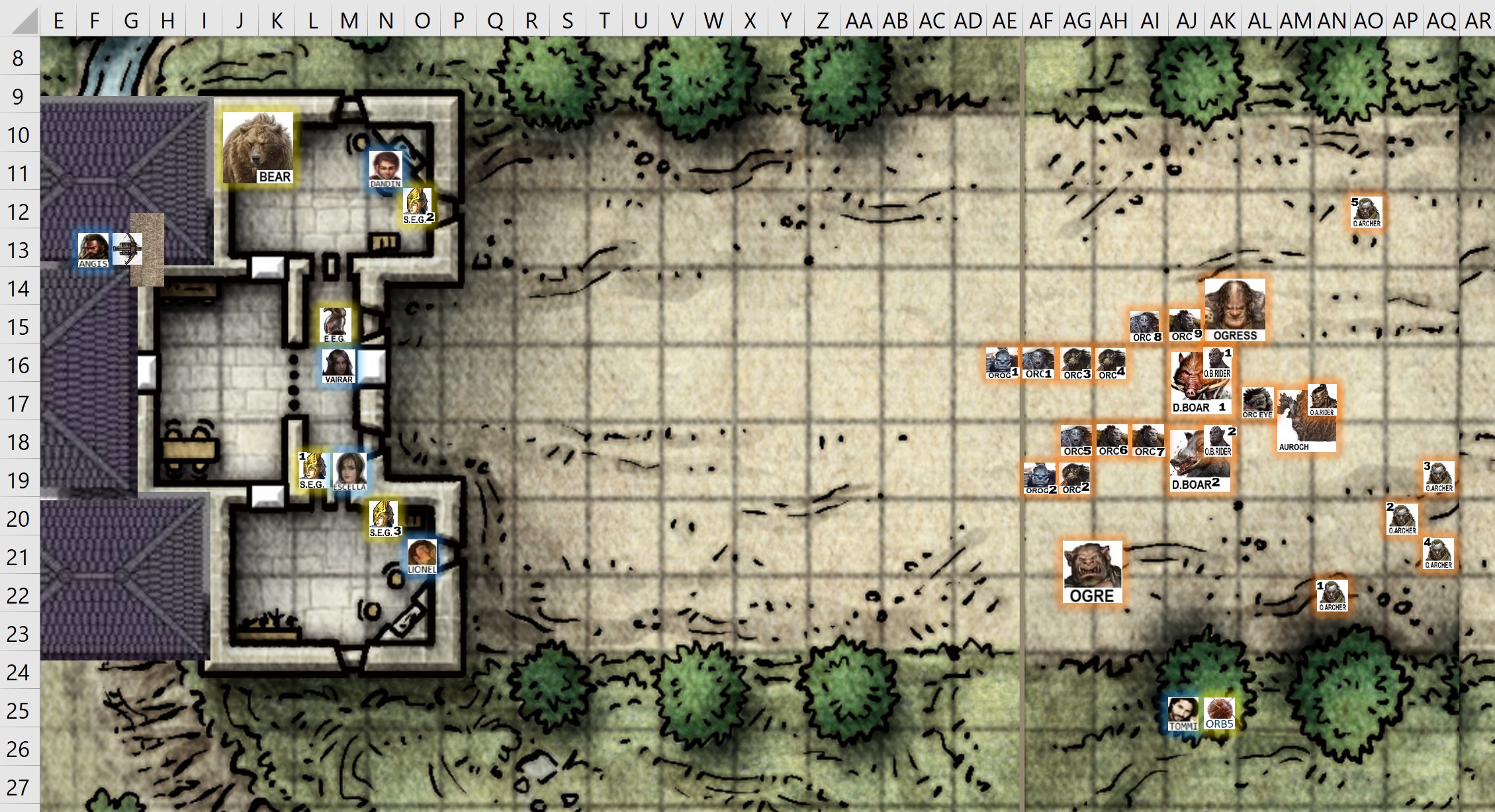 On her turn at the arrow slit, Escella sends two eldritch arrows at the bigger ogre (male) striking true against it.

Supporter
The whirring of Orb5 above Tommi makes him smile. In amongst the tree branches and their rich foliage, it appears to disappear. Tommi holds his breath, and watches the attackers march past him.

Angis took aim again, sending another of the oversized crossbow bolts at the male ogre again, ignoring the arrows falling around him. It hit the ogre, but didn’t seem to penetrate as far into its blubbery hide.

The quick barrage of arrows continues and this time, one of the elf guards actually scored a telling hit.
Their sergeant continues with slower, but more powerful hits, grouping his two shots in the chest of the orc leader

"Guards, get those archers! And keep an eye out for any casters. You know what to do!"

Lionel has trouble reaching up to the arrow slit. You elves are too tall and don't build for small people, he muttered to the sergeant, as he placed a large log from beside the fire place under the arrow slit. That's better, he said when he stood up on the log. He took careful aim at the ogre and let the bolt go. He then stepped aside and let the sergeant have a shot while Lionel was reloading the crossbow.

At 3rd level, you gain the ability to decipher an opponent’s tactics and develop a counter to them. As a bonus action, you make a Wisdom (Insight) check against a creature you can see that isn’t incapacitated, contested by the target’s Charisma (Deception) check. If you succeed, you can use your Sneak Attack against that target even if you don't have advantage on the attack roll, but not if you have disadvantage on it.
This benefit lasts for 1 minute or until you successfully use this feature against a different target.
Action: Light crossbow attack and damage: 1D20+7 = [18]+7 = 25
1D8+4 = [4]+4 = 8 and Sneak attack: 3D6 = [6, 4, 3] = 13, if applicable.

As the orcs charged forward, the defenders took turns firing arrows from the arrow-loops. The ogre took the brunt of the fire, and though the large brute looked like a pin-cushion, with arrows sticking out all over, he did not fall. The beast riders sank low in their saddles as they charged forward. The orcs covered a surprising stretch of ground in a short time, and some were able to throw a volley of javelins. As Dandin was retreating to his place near the north tower's fireplace, to let the elf guard take a turn, a javelin flew through the arrow-loop, struck the stone of the floor, and flipped over, striking him across the cheek with the flat side leaving a welt.

It was worse at the south tower: The elf guard was struck in the side by a javelin. Though her armour stopped the tip from going in, it nearly knocked the wind out of her. As she was leaning against the wall wheezing, Lionel tried to look out and a javelin struck him as well, knocking him back. A rain of arrows struck about the arrow-loop's opening, but none came inside.

On the roof, Angis was reloading his crossbow as arrows struck into his hay bale. He was glad for its protection, but his thoughts turned dark as he considered that it would only be a matter of time before one made its way over.

Out there, in a tree, Tommi stayed quiet and still, watching the orc archer move around the tree. The archer peered up into the branches searching for him. Suddenly the archer drew and fired two arrows in quick succession. But the movement it had spotted was ORB5, not Tommi, and the little orb was struck once as it tried to dodge. It made a squeaking noise that sounded to Tommi like a cry, but it seemed that it was still intact.

Just inside the door, Vairar could see through a nearby arrow-loop that some orcs had come up. They would be trying to break through soon enough. 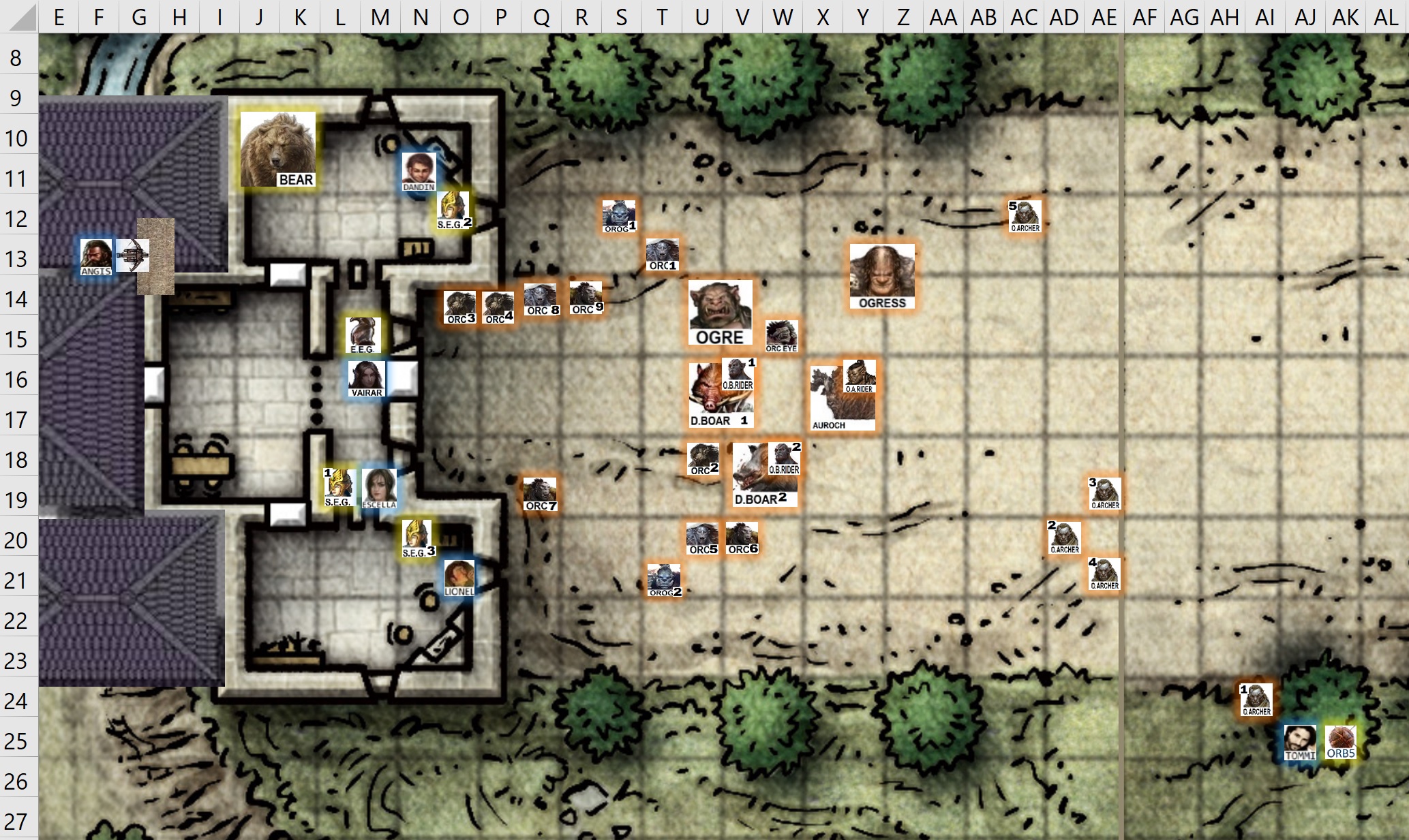 Escella continues to send eldritch blasts at the male ogre. She shouts, "Hey, they look like they are going to ram the doors. Dandin, maybe get that bear over here to help hold the door?"

Supporter
Tommi is watching Orb 5 when the arrow hits, and he realizes its movement was seen. Was his? He doesn't know. The archer is right on top of him as he stands up and swings with Gutter, the small mechanical orb fluttering around and distracting the orc.

If the orc is still standing, Tommi will stay close, positioning himself so the orc is between him and the other archers. (ready for opp attack as it disengages?)

In either case, he has his reaction to halve any damage that hits him.

Dandin was still feeling this bow out, he'd never been properly trained in the use, but for some reason he felt capable as he took another shot, looking to finish off any wounded orcs that he could spot. One shot struck home, while the other clipped the edge of the arrow slit and flew high into the air only to land point down between some Orc's feet.

When she returns from her turn at the arrow slit, Escella assumes Dandin didn't hear her over the sound of battle. Oh, well, she thinks. No time to get over there and ask him again.

Vairar hurries toward the arrow slit, raising his spear. Continuing the show of elves not being good with hurrying, he accidentally jabs the wall and stops himself with a whoof as the spear clatters against his armor.

Lining up properly this time, the priest thrusts at the orc visible through the arrow slit. The thrust hits and the low humming can be heard with barely perceptible shimmer surrounding it.

He shouts out something in orc.

Lionel got up from the floor. That spear hurt badly but he saw it in time and, with a quick reaction, he managed to dodge it. Otherwise he would be severely damaged.
Now, however, he started to wonder what he got himself into. He looked around for for the escape route but thought better about it and stayed. This time I am not going to abandon my friends! He mustered some courage and moved up to the arrow slit yet again. The sight was not pretty... lots of orcs and they were all very close. He watched one of the orcs carefully for a moment and then let the bolt fly from the crossbow.

At 3rd level, you gain the ability to decipher an opponent’s tactics and develop a counter to them. As a bonus action, you make a Wisdom (Insight) check against a creature you can see that isn’t incapacitated, contested by the target’s Charisma (Deception) check. If you succeed, you can use your Sneak Attack against that target even if you don't have advantage on the attack roll, but not if you have disadvantage on it.
This benefit lasts for 1 minute or until you successfully use this feature against a different target.
Action: Light crossbow attack and damage: 1D20+7 = [19]+7 = 26
1D8+4 = [2]+4 = 6 and Sneak attack: 3D6 = [2, 4, 3] = 9, if applicable.

Sargeant Ryallan keeps shooting as deadly as ever and the orc he target bristles almost as much as the boar it rides.

The elves finally hit their stride, and one of the ogres coming in got a couple of good hits compounding the wounds made by the ballista and others.

These orcs were fast. They were already rushing the guard towers. But Angis remained focused on the ogres. They would be the greater danger to the gates. So he let another large crossbow bolt fly from his mounted crossbow. The bolt seemed to have been poorly fashioned, however, and it wobbled in flight, striking a glancing blow on the ogre.

When the others had passed them by, ORB5 flew out of the tree and distracted the orc that was searching for Tommi, giving the lad the perfect opportunity to jump out and slash with gutter. The orc archer fell at Tommi's feet, gurgling and spitting blood.

Arrows and javelins continued to strike at the walls as the defenders there took turns at the arrow-loops as the horde came on. The ogre stumbled after being struck by one of Angis' bolts, and fell to Escella's eldritch blast. As if in retaliation, Angis and Escella were both struck by arrows. The elf guards put a few arrows of their own into the ogress. As she arrived at the wall, she reached up and pulled herself onto the roof, knocking off roof-tiles as she clambered toward Angis while kicking at his covering hale-bale as she tried to reach his position.

Sgt. Ryallan struck the auroch rider, but a one-eyed shaman was there, who blessed the rider with healing. The experienced elf guard had to move away from the arrow-loop, both to give Viarar room to thrust his spear, but also because he was battered by javelins. Lionel had managed to avoid the worst of the arrows and javelins, while striking a charging orc dead with his quarrel, but his partnering elf guard was staggered by an arrow.

When the charging orcs arrived at the gatehouse wall, the first orc to arrive was struck dead by Dandin's arrow as he tried to climb up the side of the north tower. Several orcs, including the larger orogs carried picks and they began to hack away at the arrow loops, attempting to make them wide enough for an orc to find entry. The orogs were just tall enough to attempt to pick away at the lower edge of the arrow loops on the two taller towers, while four orcs took turns taking chunks of stone out of the edges of the openings on either side of the door.

Suddenly, the auroch lowered its head and charged; slamming its horns into the solidly reinforced door. At the same moment, the rider thrust out a fiendish-looking pike. The bull had little effect on the small door and the beast staggered back, but the door buckled under the force of the powerful pike-thrust. The sound was incredibly loud in the tight space in front of the door and it left the defenders there with ringing ears. For now the door held, but it would not hold for long. 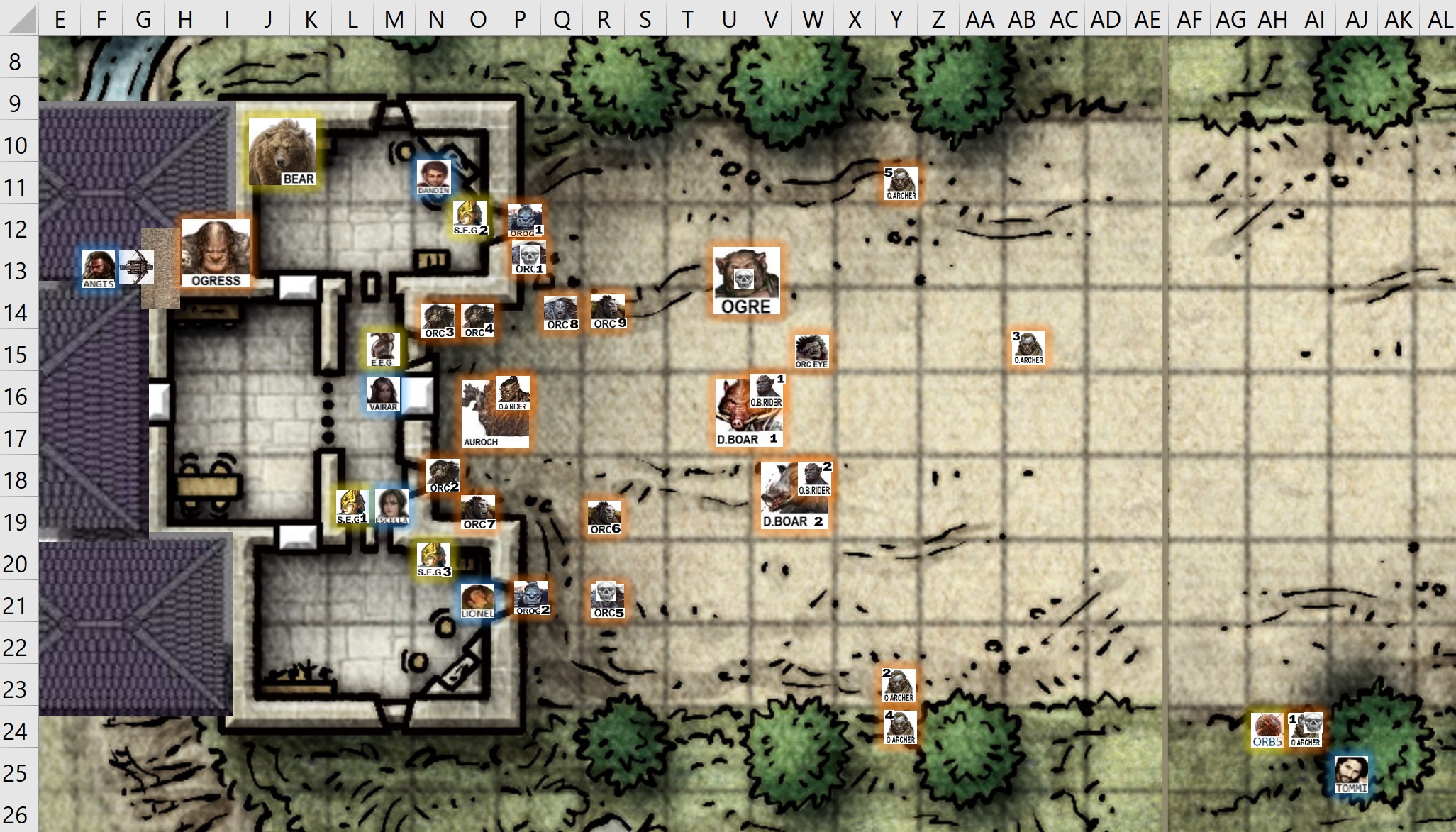