Escella stays right where she is and launches a pair eldritch blasts at Orc Archer 4 ignoring cover. Both hitting and making the orc very hurt.

15 hp damage dropping the orc to 1 hp. Any chance that was a surprise attack so she can add 1d6 sneak attack damage?

Looking at how he surprisingly survived the charge, Vairar decided not to push his luck by further advancing. He tries to finish off the orc next to him, but his attention is focused on the Auroch and its rider.

Escella's blasts shot past Lionel and he took the opportunity to poke his head out so that he could see any enemies. The orc next to Vairar was the first he saw and he lifted the crossbow and fired. Satisfied that the bolt found its mark, Lionel ducked back to his spot on the fireplace.

EDIT: I just realized the eye is dead...so damage to the Auroch rider.


Sgt Ryallan rallies his forces.
"Keep the orcs in the side rooms, each focus on one entry and shoot anything that comes through. The help is here!"

Each elf shoots at the targets given. One on the south sees no targets close by and makes a solid shot against the auroch rider undoing some of the healing the orc champion received from their shaman.

As the boar-riding orc tried to get his mount to push its way through the writhing roots entangling its legs, Tommi slung a stone that struck the orc in the side of the head. The orc's eyes went wide and he fell from his saddle, only to be wrapped in vines as he died. The sabre-toothed tiger leaped onto the back of the boar, and though it too was wrapped in vines, it dug its claws into the boar's back and its tusk-like teeth into the boar's neck. The enormous pig began to squeal like scared prey when only moments before it had held a terribly menacing countenance.

The other beasts rushed past, dashing along the road to harass the enemy from behind. Angis struck the auroch bull with his quarrel as Ryallan shot its rider. The rider spun around, thrusting his pike at the massive ram that charged at him from behind. The ram took a solid blow from the magical pike that cracked one of its horns, but it stood its ground. Behind Tommi, the spider leaped from tree to tree.

Escella shot an orc archer with her eldritch bolt. The archer was wounded, and began to pull an arrow, when the giant vulture swooped down on her. The orc tried to run, and the vulture picked her up and rended her with its claws. The other archers fared only slightly better: One faced off with the panther while the other the oversized wolf. Both were forced to hold their bows in their off-hand while fighting with a hand axe. Neither were terribly successful.

Viarar was struggling with his last orcish oppenent when Lionel popped his head out the broken hole in the wall and shot that orc dead from behind. The halfling, who was beginning to be blackened by soot, ducked back inside, feeling safe from harm in the tower's fireplace.

Dandin whistled and Old Sooty broke off from gnawing on an already-dead orc and rushed at the Auroch rider. The grizzled old bear nearly knocked the burly orc from his saddle with a vicious swipe of his claws that raked the orc's shoulder, leaving him with a nearly lifeless arm.

It was not long before he and the other few remaining orcs were soundly defeated. 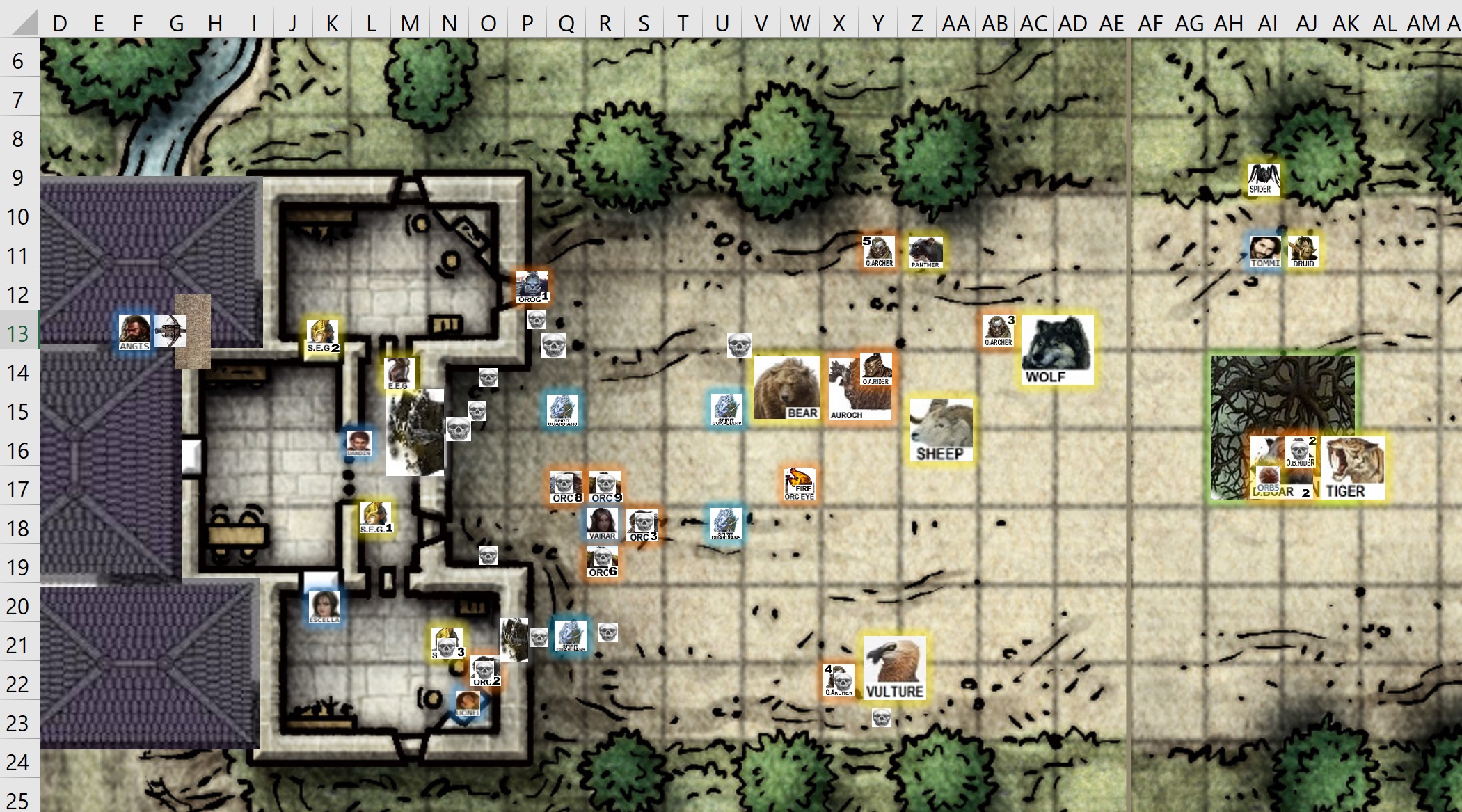 "Well, that was something. Good thing we were reinforced. You okay, Lionel?"

Before Viarar released his host of elf spirits from their summoning, one of them scooped up the auroch-rider's pike and presented it to him on one knee with a bowed head. The victory, at least according to the elf-host, belonged to him through their service.

Escella's words reached Lionel from what seemed to be far away. The fighting had been scary but he hadn't run away this time. He looked himself up and down and realised that the sight of him must have worried Escella, prompting her concerned question. A mix of sot and orc blood smeared all over his clothes and, presumably, his face too. He must have looked much worse than he felt. I am good, Escella. I am fine... I think. Lionel hesitated and then added I think my mother would be upset if she saw me right now. I have ruined my clothes!

Supporter
Tommi leans on the druid next to him, and introduces himself. "Thank you. 'M Tommi." He coughs. "Your arrival is, um, well-timed, and we are grateful."

"Perhaps you could help me back to the gatehouse?"

Either way, he walks up the grand approach slowly, Gutter still in his hand which lies limp at his side.

The elf druid sized up Tommi's injuries and put a hand on his shoulder. A soft moonlight shone from her, and Tommi could feel his pain subsiding. "Hello, Tommi. I am Sarel."

Supporter
As Tommi starts to move, he feels Sarel's magic take its effect, his injuries first going numb and then healing up. Tommi watches the blood stop, wounds close, and the dried blood flake away.

"That's... wonderful," he says, thanking her. Her words, "foolish boy" play back in his memory, and he begins to blush.

He continues to the gate.

As it turned out, those Orcs were only the first wave, come to soften the manor's defenses and to create a point of entry. Two waves followed, each bigger than the one before. Fortunately, the Druids were able to enact Escella's earlier plan by causing the trees to grow and twist themselves across the road, creating a difficult gauntlet of dangerous foliage.

With that in place, the defenders were able to pick-off their attackers at range without any further casualties. Better still, they were able to take turns at the front, or resting, as suited them. As the third wave of orcs routed (over half their number killed) it began to be clear that things were well in hand at the gatehouse. As free-agents, it was decided that the Daggerfordians would be best suited to turn to the other side of the manor, to see how things fared there.

No word had arrived from that side since the start of the siege, which could have been a good sign. Unfortunately there was every reason to believe that it could just as easily mean that things were not going well at all...

When it looked like the orcs were broken, Angis sat hard on a bale of straw to catch his breath and attend his wounds. “Ever’one okay?” he called down.

During the lull in the fighting, Angis dragged the dead aurochs and boar into the keep. “I want steaks an’ chops when this is over,” he told the harried kitchen folk before heading back to the fighting.

Rested and ready for the other side of the estate, Angis asked, “We takin’ the crossbow?” He nodded up to the roof. “Take the war wagon?”

Spells
1) 3/4 Absorb Elements, Cure Wounds, Hunter’s Mark
2) 2/2 Pass Without Trace
Primal Awareness (cast each spell once per long rest): Speak with Animals, Beast Sense
4/4 Boon of the Elk. Can cast Knock four times (without the loud sound) as an Action. Until he uses the last one, non-good aligned Fey count among his Favoured Enemies.

Vairar takes the pike with proper ceremony, bowing to the spectral elf.
"Go in peace, ancient one. Thank you for the boon of your presence."

He slumps, almost falling on his knees as the spirit dissipates and his connection to the Arvandor is severed.

Gathering himself, he waits for the group to gather and says a small prayer of thanks to The Winged Mother and sings a short eulogy for the fallen guard.

The kitchen was over a bridge and two floors down a great winding staircase. Angus had thought to bring the aurochs and dire boar carcasses down for a grand meal later, but their great weight proved to be far too much for the task before he was called back to the fray. As it happened, he managed to drag them over the bridge to the top of the stairs.

The manor was dark. Though the sun had begun to rise outside, the windows were shuttered and the glow-orbs, candles, and elemental fire-spirits that had been about before were gone. Angus knew that the servants, also, were holed up in their rooms, relatively safe in case of temporary breach.

Lionel took a moment to sit down in the fireplace, too tired to move. That went well, he thought.
I'm good, he called up to Angis. He then went back into the Manor house to wash off the worst of the sot and to catch up with the others.


Short rest healing (HD): 1D8+3 = [5]+3 = 8, Lionel is fully healed.
Took expertise in Animal handling, since Lionel seems to have a knack with animals when he was dashing for the manor house a while back with the horses and cart, dragging old Bessie behind. Also, took expertise in investigation, since it is in his nature to be inquisitive.
HP 51/51, AC still 16

As things started to calm down at the gatehouse, Lionel thought he would head inside to quickly bathe. When he made his way across the covered bridge to the grand staircase, something was wrong. A dark, smoke-like mist rolled up from the lower levels. At first Lionel thought it was smoke from a fire, but it smelled more like a rotting corpse. It stung his eyes and made his stomach churn and his head swim.